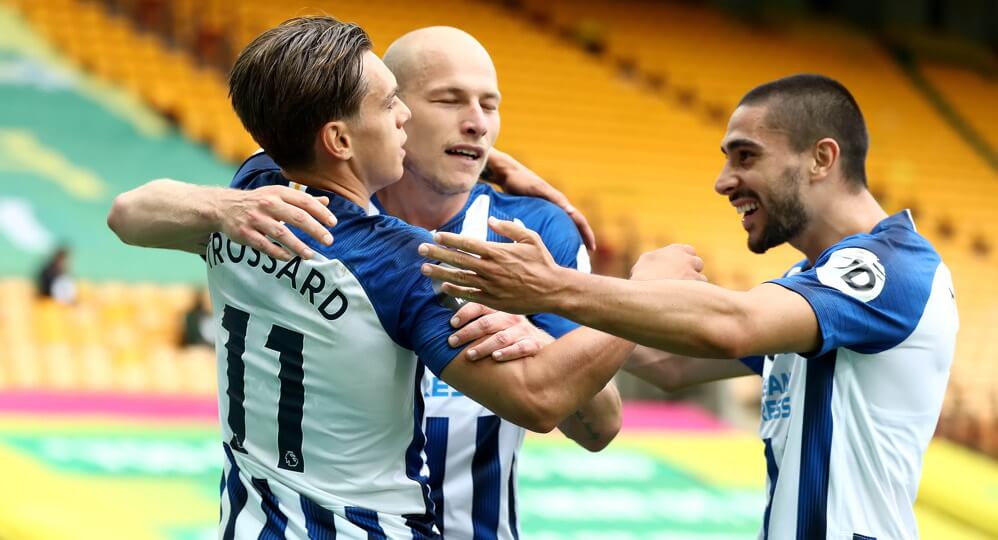 Our Brighton Team Preview takes an in-depth look at their prospects ahead of the new Draft Premier League season.  These hints and tips will provide essential information to enable you to get ahead in your Fantasy EPL competition during the pre-season!

Brighton struggled at times in the Premier League during the 19/20 season, as they always do. Clearly, they’re a smaller team, lacking the funding to compete for a top 6 spot, instead hoping to maintain their spot in the Prem. This, though, will be the team’s fourth season in a row in the top flight, and they’ve hired a manager who has excited fans and made the team a joy to watch. They’ve also completed several key signings over the last couple of years to allow them to be able to compete with most of the other teams in the league, even poaching some key victories from top six teams. Overall, as Fantasy EPL is concerned, just know that Brighton players don’t offer the upside that players on a more explosive offense will. However, they can provide great late-round value.

Last season was Graham Potter’s first at the helm for Brighton & Hove Albion. While fans were surely delighted with the team’s evolution and exciting play style, fantasy managers were left frustrated. As the season progressed, it became clear that the manager had no intention of settling on a consistent starting XI. In fact, Potter became known to many in the fantasy football community as “Pep Lite” or “Mini Pep” referring, of course, to Manchester City manager Pep Guardiola, who is infamous for rotating the names on his team sheet.

We’ve seen that Potter, when he’s able, prefers to play a 4-4-2 with wing-backs. Often times, however, he opts for a 3-5-2 with wing-backs. This leaves three to four midfield spots available on a team loaded with midfielders. Again, Potter has no sentimentality when it comes to giving his players minutes on the pitch. So, there will be very few options on this team that could be considered set-and-forget. As a general rule, you’re probably not drafting a Brighton player before round 10 in a 10-team league. However, week-to-week, don’t be afraid to start players like Burn, Mooy, Lallana, and Trossard in a good matchup, but always be prepared to sub them out when they (inevitably) are benched.

Brighton has already made waves in the transfer pool by signing Adam Lallana on a free transfer even before the 19/20 season officially ended. He makes for an experienced technician in the midfield for this team. A solid decision-maker and confident on the ball, Lallana’s not going to set the world on fire under Potter. However, he could help to inject some creativity and consistency into this midfield. We’re unlikely to see any further moves at midfield since, as I’ve mentioned, Potter has no shortage there. Which is perhaps why he has let Aaron Mooy move to Chinese outfit Shanghai SIPG.  Brighton would have surely been well compensated for losing the Australian!

On the top of the gaffer’s shopping list, though, is a marquee new striker. Neal Maupay was, by all accounts, a serviceable forward signing for the club. However, his offensive output wasn’t convincing any Seagulls fans that he’s the next Tommy Cook. He’ll need help up front if the club wants to maintain their place in the league. Aaron Connolly received some attention last year as he deputized the attack with Maupay for a number of matches. However, if the team signs an experienced striker, we’re guessing he gives way.

Finally, Brighton & Hove Albion have already secured the signature of Joel Veltman, which many are seeing as a huge coup by the club. We’re talking about a CB/RB who has won the Eredivisie title three times with Ajax, has 22 international caps, and has Champion’s League experience. It’s hard to overlook a player of that quality. Defense was the one area of this team that looked at least mildly predictable… well, no longer. I think Veltman slots in to the starting XI or, at the very least, rotates in and out with the likes of Dunk and Webster.

As we’ve already stated, the Seagulls’ goal this season will be to remain in the top flight. Considering the promoted teams from the Championship, that won’t be an easy task. Brighton is undoubtedly one of the five worst teams in the Premier League. However, their X-factor could very well be Potter’s exciting pressing play-style. Add to that a notable striker and, with some luck, this team will likely finish just outside the relegation zone.

For details of the current Brighton Set-Piece Takers, click here!

Let me be completely honest here, as this is the Brighton Team Preview, I’m going to predict a starting XI for this team, but doing so is like throwing a handful of sand into the air and then hoping to find and pick up every single grain. There’s a reason why we’re not drafting these assets before round 10 or so: the rotation will be very real and it will be very frustrating. Just make sure you’re not trying to convince yourself otherwise on draft day. 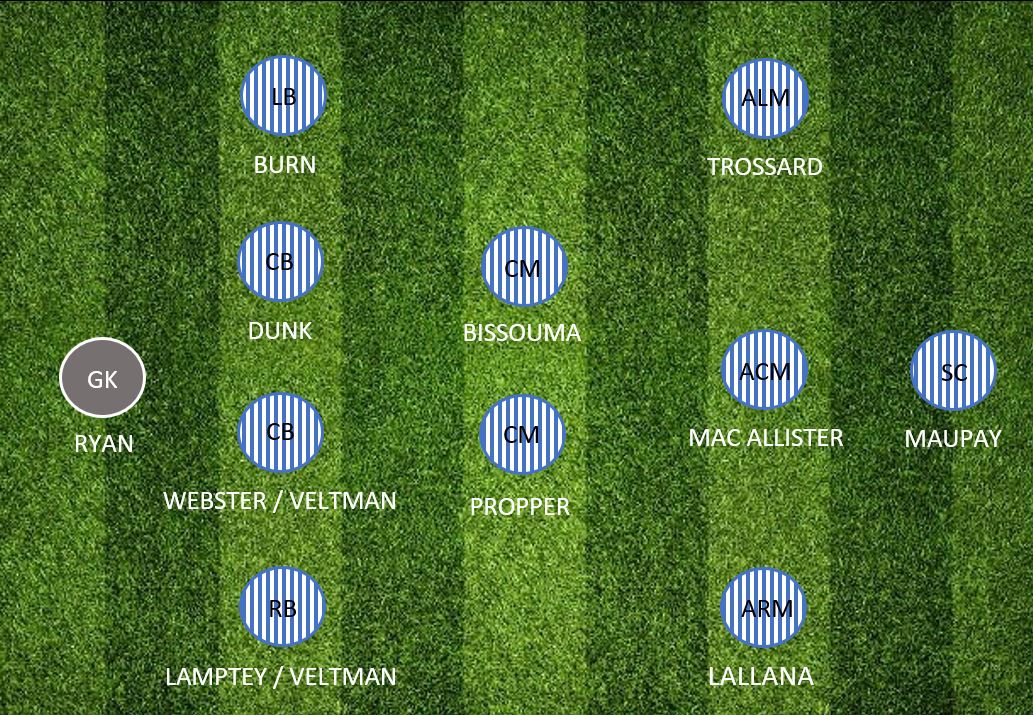 With a season under his belt, Neal Maupay will be better acclimated to the speed and the expectations of the English game. Even on a Brighton team that underwhelmed almost weekly, he scored just a hair over 8 points per 90 minutes. His points per game number was, obviously, lower, but you’re not starting him if he’s not in the XI. So, clearly, when he starts he performs decently, despite being on a bad team. If Brighton are able to up their game even slightly, Maupay’s numbers will benefit. But to be clear, don’t mistake Maupay for an every-week fantasy asset. He should be your fourth striker, maybe even fifth. Trot him out in a good matchup when your other strikers are benched or injured.

Fantasy owners are desperate to see Leandro Trossard get more minutes on the pitch, because he’s a ghost point magnet. Plus, he’s skillful on free kicks and he contributes attacking returns. However, if there’s one thing that this Brighton Team Preview has made clear to you, please let it be the fact that game time under Potter is never predictable. Because of that, the discrepancy between Trossard’s PPG (7.7) and PP90 (10.7) is one of the highest in the league. He was also a “key pass” machine with 42 in limited minutes. If you can secure Trossard late in the draft and hold him on your bench, you’ll be rewarded with a consistent points scorer when he does appear in the starting XI.

I’ve included Dan Burn in this list, but only because Brighton have so few other viable fantasy options. Lallana may not get enough consistent time on the pitch to be a dependable option. Plus, Burn’s PP90 (8.2) are much closer to his PPG (7.7), since he played more minutes. So, that means that you know what you’re going to get with him. He’ll rack up interceptions, takeaways, and aerials, but not enough of them to neutralize the number of goals that Brighton will concede versus quality opposition. So, play him against middling to lower-level opponents and, even then, temper your expectations.

Tariq Lamptey: His speed absolutely terrorized defenders last season after the Premier League restart. While he didn’t start every match, he did most. And he scored well, even in losses (10.5 in a 1-3 loss to Liverpool). Lamptey has the talent and the raw skills to be a difference-maker on the pitch. Plus, his play style makes him the poster child for accumulating ghost points. Don’t plan on many clean sheets from him, and know that the occasional negative scoreline is coming your way. But, if you can secure him in the last round of a draft, he’ll have enough 10-15 point gameweeks, that you’ll be happy you did.

Alexis Mac Allister, Adam Lallana and Yves Bissouma are also players to keep an eye on for later on in your Fantrax drafts.  All three of these midfielders offer good points potential!  Ben White is also an interesting one now that he has signed a new contract at the club.  The young centre-back performed incredibly well on loan at Leeds last season, and Brighton rejected several big money bids for the player.  He’s obviously part of Potters plans.