August 14, 2020 by The Fantasy Football Chaps Leave a Comment   |  TheFFChaps 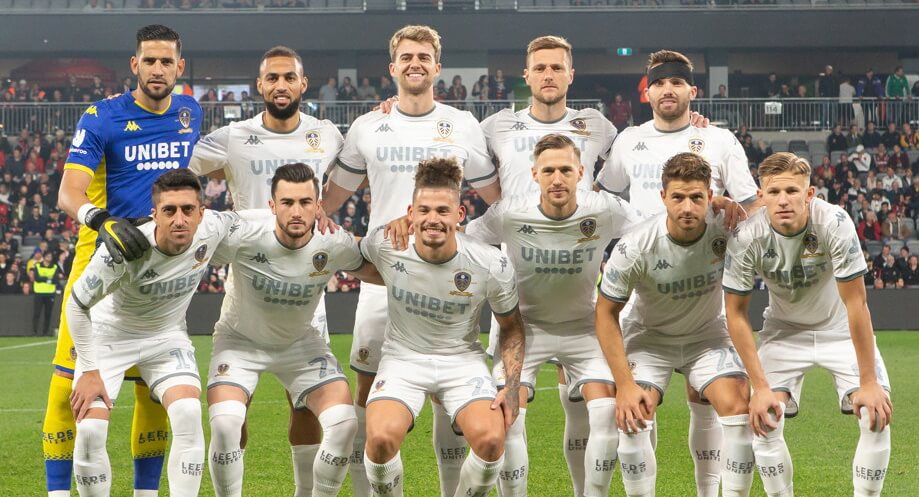 Our Leeds Team Preview takes an in-depth look at their prospects ahead of the new Draft Premier League season.  These hints and tips will provide essential information to enable you to get ahead in your Fantasy EPL competition during the pre-season!

Next up in our Premier League Team Preview’s is Marcelo Bielsa’s Leeds side.  The Whites will be looking to establish themselves back in the Premier League, after 16 years away!!

Leeds United are a sleeping giant of English football.  Formerly one of the best teams in the league, and a history including three league titles and an FA Cup, Leeds have been languishing in the lower reaches of the English game since being relegated from the Premier League in 2004.  From a Champions League semi-final in 2001, to relegation to League One in 2007.  It was a turbulent start to the century for The Whites, and it was all due to one thing; money.  But under the ownership of Andrea Radrizzani, the last few years have seen stability.  The appointment of a world-class coach in Marcelo Bielsa in 2018 was a masterstroke, and Leeds won the Championship last season to return to the promised land of the Premier League.

Leeds finished the season ten points clear at the top of the Championship table, after finishing the season very strongly.  The Whites won 12 of their last 14 games, and looked good throughout the whole season.  Four defeats in five games between gameweeks 27 and 31 was really the only blip on their record.  Ben White, Liam Cooper, Luke Ayling, Kalvin Phillips and Jack Harrison were the outstanding performers, with Patrick Bamford and Pablo Hernandez scoring most of the goals.

Leeds are being heavily linked with Norwich City playmaker, and outstanding Fantrax asset, Emi Buendia.  This would be a really strong signing for Leeds, and would provide Fantrax managers with an amazing midfielder.  However, we’re hoping Buendia moves to a better Premier League club.  The Argentinean has the qualities to play for a top half of the table side, rather than one who will be battling against relegation.  Elsewhere, Bielsa has brought Manchester City winger Jack Harrison back to the club on loan, and a new centre back has arrived in the form of German Robin Koch.  The 24 year-old has been signed from Freiburg, and has been included in recent squads for the national side.

The area that Leeds really do need to strengthen in up front.  Patrick Bamford isn’t good enough for the Premier League.  Don’t be fooled by his 17 league goals last season.  If Leeds are to survive next season, they need a stronger striker than Bamford leading the line.  If you take one piece of advice from this Leeds Team Preview, let it be this!  Leeds have now completed a deal to sign Spanish international forward Rodrigo Moreno from Valencia in a club-record deal!  Find out more on him below.  The Whites have also made inquiries for Rangers midfielder Ryan Kent.

At the moment we’re predicting Leeds to stay up.  But this does all depend on how much money they are willing to spend to try and stay in the division!  Right now they don’t have enough quality in the squad, but if they can bring White back to the club and manage to pull off the signing of Buendia, they have every chance of staying up.  Players such as Cooper, Ayling and Phillips will perform well, and attackers such as Costa, Hernandez and Klich will offer moments of brilliance.  Leeds’ prospects is all down to their manager.  Bielsa is obviously a very experienced and talented coach, and will undoubtedly be relishing the chance to manage in the Premier League.  We think he’ll be able to pull this one off with his tactical knowledge, even if the quality in his squad is lacking.

For details of the current Leeds Set-Piece Takers, click here! 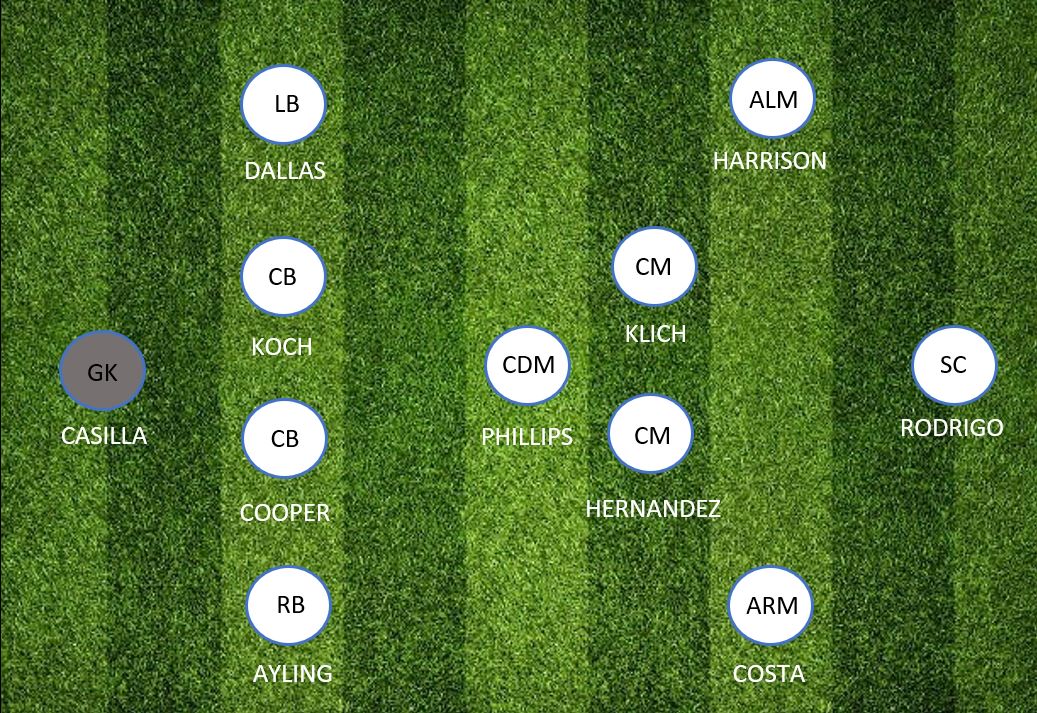 These are tough to predict at the moment, with lots of question marks over the Leeds squad.  The first player we’re going to highlight here is Jack Harrison.  The 23-year-old winger is about to embark on his third straight season on loan to Leeds from parent club Manchester City.  Harrison has firmly established himself in the starting eleven, and Bielsa will be delighted to have secured his services for another season.  In the Championship-winning campaign, Harrison scored six goals and provided eight assists.  He also averaged just under two key passes per game, as well as successful dribbles.  The Leeds winger isn’t going to set the Premier League alight, but he’s guaranteed playing time and will be a decent fourth or fifth midfielder to have in your roster.

Next up is defender Luke Ayling.  The former Arsenal youth prospect is a player we always liked on Football Manager back in the day.  Not sure why we wanted him to succeed at Arsenal back then… but now he has in real life by making it to the Premier League as an integral part of Bielsa’s side.  Ayling is now 28 years old, and has certainly paid his dues after playing for Yeovil and Bristol City after leaving Arsenal.  Last season the Englishman scored four goals and provided four assists, which are pretty good numbers for a right-back.  Ayling is also fairly decent in the air, as he averaged over two aerial wins per game.  We fancy Ayling for a good streaming option to bring into your Fantrax roster for The Whites’ nicer fixtures.  Hopefully, he develops into a fairly consistent asset.

Our final player to highlight here is new forward Rodrigo Moreno.  Leeds have smashed their club-record transfer fee of £18m for Rio Ferdinand who they signed back in November 2000.  The Spanish international will be the main striker in this side, as Bamford is not good enough to lead the line of a Premier League side.  Rodrigo scored eight goals, and provided nine assists last season in all competitions.  We don’t think he’ll be an amazing Fantrax asset this season, but he will be guaranteed plenty of game time.  We would initially rank him around the Diogo Jota, Chris Wood, Che Adams kind of level.

Kalvin Phillips is a player also worth highlighting.  Looking at the Englishman’s statistics from last season, we’re quietly confident he’ll produce consistent scores around the six or seven points mark.  The Leeds academy graduate is now 24 years old, and is developing into a footballer with a lot of potential.  Last season, Phillips averaged 2.6 tackles per game and 1.4 interceptions.  He also averaged 1.8 key passes per game, 1.8 successful crosses, and 1.4 successful dribbles.  There are all really encouraging statistics, which would mean that Phillips would fill out his stats sheet fairly well across attacking and defensive scoring categories.  Obviously he will need to up his game now that he’s playing in the Premier League, but defensive midfielders playing against better opposition do often score well.  One to take a punt on towards the end of the draft for us!

From the rest of the current squad, there look to be lots of streaming options, but no players that really stand out.  In defense, Liam Cooper will offer decent value during Leeds’ easier home fixtures.  The center back averaged 4.7 aerials per game last season, so is certainly one to keep an eye on for games where he’ll come up against a big target man.  Robin Koch will be a similarly decent option at certain points of the season.  Left-back Stuart Dallas is classified as a midfielder on Fantrax, which dents his appeal.

The remaining attacking midfielders who will play alongside Harrison will be Helder Costa, Pablo Hernandez, and Mateusz Klich.  Although we expect new arrivals in these positions.  Hernandez produced some really strong numbers in terms of goals and assists last season, with nine apiece.  The Spaniard is 35 years old now though, so it remains to be seen if he’ll be able to keep pace with a more intense league.  Klich scored six goals and provided five assists last season, and averaged nearly two key passes per game.  And Costa is a talented footballer, but may be too inconsistent to be trusted as a Fantasy EPL asset.

For a more detailed analysis of the prospects of Leeds players, as well as Fulham and West Brom, head over to drafterthoughts.net for a comprehensive breakdown by @drafterthoughts!