August 11, 2020 by The Fantasy Football Chaps Leave a Comment   |  TheFFChaps 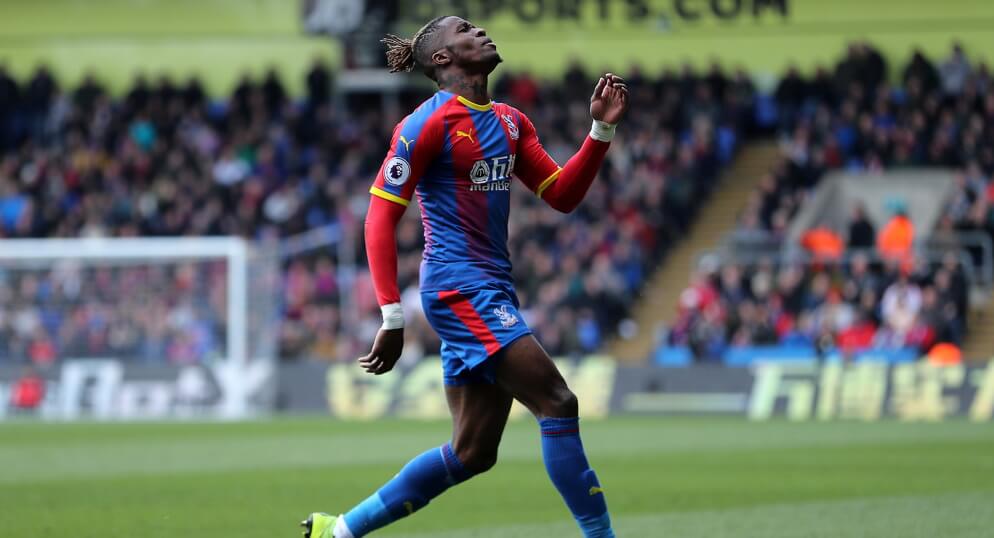 Our Crystal Palace Team Preview takes an in-depth look at their prospects ahead of the new Draft Premier League season.  These hints and tips will provide essential information to enable you to get ahead in your Fantasy EPL competition during the pre-season!

Next up in our Premier League Team Preview’s is Roy Hodgson’s Crystal Palace side.  The Eagles has an up and down 19/20 season, and we’re a bit worried about their prospects for the new season.

Crystal Palace finished in 14th position in the Premier League last season.  Although they were not particularly troubled by the threat of relegation, they were also never really a team that excited us Draft Premier League managers!  The Eagles did manage to string together four wins from Gameweek 27 to 30, without conceding a goal in any of these games.  They then followed this up by losing seven games in a row prior to the draw with Tottenham on the final day of the season.  This alone shows why their inconsistent performances reduces their Fantrax potential.

Jordan Ayew was their top goalscorer with nine league goals, and the next best was Wilfried Zaha with four.  This shows how poor The Eagles were in an attacking sense!  Elsewhere, Gary Cahill was a rock at the back for Hodgson’s side, Patrick Van Aanholt provided decent scores at times, and Christian Benteke provided good returns for Fantrax managers when he was in the side.  Overall, a fairly average season for Palace, but they did avoid relegation, which is always the top priority for them.

Once again, the main topic of conversation regarding transfers will revolve around Wilfried Zaha.  It is time for Zaha to move on in our opinion.  The constant talk of the Ivory Coast winger moving clubs is exhausting for us, and no doubt exhausting for the player and the club.  Arsenal, Everton, and Tottenham are all in the frame for his signature if the bookies are to be believed.  We could certainly see him moving to Everton to solve their issues on the right-wing.  This one looks set to drag on all summer, and will leave his Fantrax prospects a little up in the air until a transfer decision is made!

If Zaha does leave, one player that could move to Palace to replace him is recently relegated fellow African Ismaila Sarr.  The Watford man has a lot of potential but is still finding his feet at this level, to be honest.  He floats in and out of games, but under Hodgson, we could really see him flourish.  One man that Palace have managed to sign is Queens Park Rangers midfielder Eberechi Eze for just under £20m.  He’s likely to play on the opposite flank to Zaha as things stand.  A prolific goal scorer should also be on the shopping list, but we’re not sure what kind of funds will be made available to Hodgson.

We’re predicting relegation for Crystal Palace, which would end the clubs longest spell in the English top division after eight seasons.  Roy Hodgson is obviously a managerial legend and continues to work wonders at a club with limited funds and a lack of quality.  But their form at the end of last season was really poor, and there is only a break of six weeks between one season ending and the next starting.  Therefore, we’re predicting that Palace will continue on their decline.  There just isn’t enough quality in the squad, even if Zaha stays.  Their squad is full of seasoned professionals who are tough players, well drilled in Hodgson’s philosophy.  However, when most of the starting eleven contains defensive-minded players, you’re eventually going to come unstuck.  Zaha will end the season as a Top 50 overall player,  Eze should perform fairly well, and Ayew will do a decent job as your 4th forward.  But other than that, Palace is not a place to go for consistently good Fantrax points. 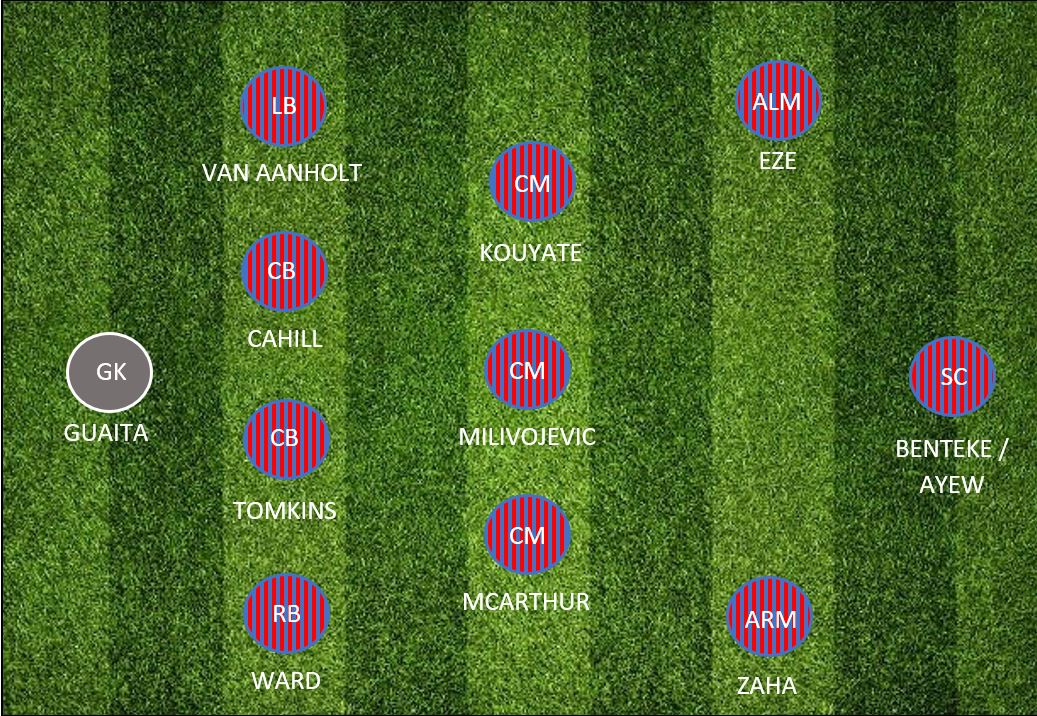 Wilfried Zaha will be a Top 60, potentially Top 50, player no matter where he ends up for next season.  The former Manchester United winger is a talented footballer and is a player you will want to own in Fantrax.  However, we wouldn’t recommend drafting him very early.  Wait until round five or six of the draft, and pick him up if you’re in need of a midfielder!  Zaha ranked second for successful dribbles last season, with only Adama Traore ahead of him.  This is where the Crystal Palace man racks up most of his points, although this also means he also loses quite a lot of points for dispossessions!  Zaha was top of the list for this scoring category by a huge margin last season, and a dispossession is worth -0.5 points on Fantrax.

Eberechi Eze is second in our list of projected high scorers.  We’ve seen a lot of people on Twitter ranking his prospects fairly low, but we see him as a player on par with the likes of Armstrong, Lo Celso, and Shelvey.  Eze averaged around three successful dribbles per game last season, and he will be one of The Eagles’ very few outlets.  Therefore, he’ll receive the ball a lot, and have plenty of chances to provide positive contributions to the game.  Yes, he is young and inexperienced, but we think Eze will be a decent asset in Fantrax this season!

Now then, our final Crystal Palace player to highlight is Christian Benteke.  We love Benteke.  He’s a terrible footballer, and one you would never considering owning in a standard scoring Fantasy EPL league.  But here’s the thing… Fantrax rewards attackers for positive contributions to the game, rather than simply goals and assists.  We all know Benteke doesn’t score goals, but he does win headers.  Lots of headers.  The big Belgian was ranked 6th overall for aerials won last season among the forwards, despite playing less than half of the number of minutes of his fellow forwards.  If Benteke can nail down a starting slot for Palace, he’s a player you will want to own.  We’re not exactly sure how they will line-up now that Eze has arrived, but the Belgian is certainly worth a punt in the later rounds of your draft.

The other ‘key’ asset to note here is Jordan Ayew.  He’s a reliable Fantrax asset who will provide decent returns at certain points in the season.  The Ghanaian international forward scored nine goals last season, en route to being the 23rd highest scoring forward.  Ayew certainly isn’t the most glamorous of footballers to own on Fantrax, but he does provide an essential role.  The back-up forward for when of your more explosive forwards is benched!!  It remains to be seen how Ayew and Benteke’s game time will be impacted by the arrival of Eze, however.

On to the best of the rest.  There really isn’t that much else to highlight in this Crystal Palace squad to be honest.  James McArthur is a handy player to have in your squad to plug into your starting eleven when required.  The Scottish midfielder scores fairly well in Fantrax, and will usually gain around six or seven points.  We wouldn’t recommend Luka Milivojevic; he had a poor campaign last season.

In defense, Gary Cahill and Patrick Van Aanholt are the two players we would consider owning.  Cahill had a great first season with The Eagles after joining on a free transfer from Chelsea.  The English center back still has it.  And he often scores well on in the Fantrax Scoring System due to his robust defensive displays.  Dutch left-back Van Aanholt scores well more so on the attacking side of things, as he often gets forward down the left-hand side and will produce a fair amount of crosses into the box.  Two players to consider towards the end of the draft.