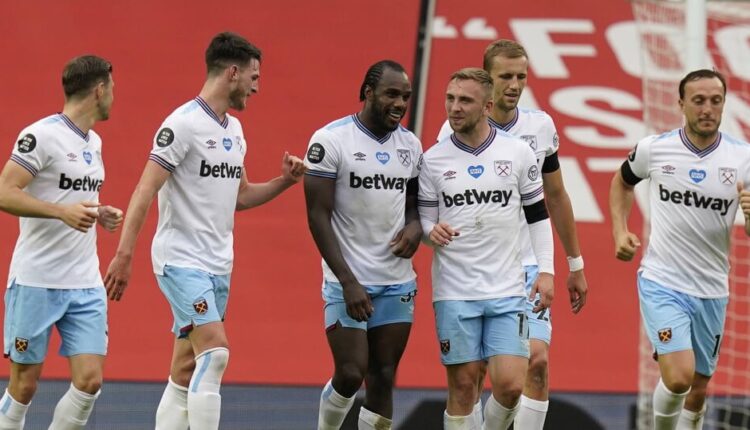 Our West Ham Team Preview takes an in-depth look at their prospects ahead of the new Draft Premier League season.  These hints and tips will provide essential information to enable you to get ahead in your Fantasy EPL competition during the pre-season!

First up in our Premier League Team Preview’s is David Moyes’ West Ham side.  The Hammers will be looking to bounce back after a somewhat disappointing season in 19/20!  They showed some really good form at the end of the season, which is encouraging heading into the new campaign.

It was a pretty poor campaign for The Hammers on a whole, as they finished a disappointing 16th in the league and were fighting against relegation for most of the campaign!  Manuel Pellegrini was sacked on December 29th after a run of nine defeats in 12 games.  We won’t mention the goalkeeper debacle featuring Roberto Jimenez and David Martin!  David Moyes returned to the club for his second spell in charge, but he too found life tough at West Ham.  The new manager suffered a run of eight defeats in his first 12 games in charge, despite beating Bournemouth 4-0 during his first game.  The Hammers ended the season strongly though, suffering just one defeat in the final seven games.

January signings Jarrod Bowen and Tomas Soucek, as well as the form of Michail Antonio, proved to be the turning point.  West Ham have a squad bursting with talent, but a lot of their players favor flair over-commitment.  This is the real issue at West Ham, and this needs to be addressed by Moyes ahead of the new campaign.

As we’ve stated above, West Ham has a real issue with owning a lot of players that just aren’t committed or dedicated to the cause.  Players such as Felipe Anderson, Manuel Lanzini, and Andriy Yarmolenko are good footballers.  But they can’t all play on the same side as it leaves them too imbalanced.  Moyes should be looking to move on a couple of the high earning attacking midfielders in favor of either hungry younger players or older experienced players.  Striker Albian Ajeti has already left the club after failing to make an impact.

We don’t think West Ham need to add much to their squad, as it does have a lot of talent.  Move on a few of the overpaid flair players, and bring in some hungry players who will be committed to the cause!  And speaking of which, The Hammers look set to ignore our advice and bring in World Cup winning German midfielder Mario Gotze!  The free agent is obviously a very talented footballer, but he’s had a career ravaged by injuries, and would demand a pretty lucrative contract with no transfer fee involved in the deal.

We’re predicting a good season for West Ham, based on the form showed during the Premier League restart.  Now that they have added players such as Soucek and Bowen who have added some desire to the team alongside Noble and Rice, we think they will be a really decent team.  Keeping Antonio fit and firing is the key thing, and getting the best out of Haller will obviously be a top priority.  The £45m signing does have a lot to offer this team if he can re-find the confidence that gained him the transfer.  West Ham have a few really strong Fantasy EPL assets this year on Fantrax, as well as a few players who will be decent streaming options throughout the season.  Read below for specific details on the players we recommend drafting. 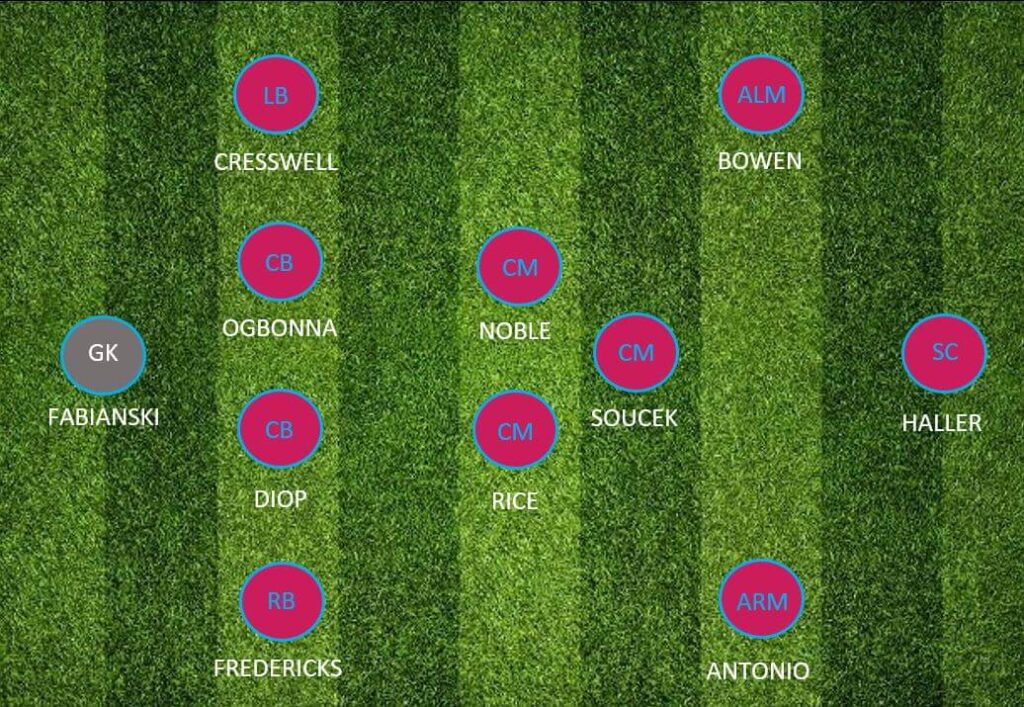 Michail Antonio is the marque attraction for this West Ham Team Preview after his electric form to end the season!  The Englishman was the 4th highest scoring player during the Premier League restart, with his 61 point haul against Norwich the stunning highlight.  Antonio remains classified as a midfielder on Fantrax, despite ending the season as the central striker.  There’s a decent chance that Haller plays as the target man and Antonio reverts back to his usual attacking midfield position – keep an eye out for the West Ham lineup during friendlies!  Antonio has always been a beast on Fantrax, but his fitness issues hold him back.  We’re hopeful of a strong, injury-free, season for Antonio, and a Top 30 overall points score.  Look to draft him around the third round.

Next up is January signing Jarrod Bowen, who performed incredibly well for The Hammers after arriving from Championship side Hull.  Bowen managed one goal and four assists during his 13 appearances, as well as scoring really well for key passes, successful dribbles, and accurate crosses.  The Englishman was one of the reasons that West Ham beat the drop, and he looks like a really talented footballer to take the club forward.  Personally, we’re really high on Bowen.  We rank him alongside the likes of Ward-Prowse, Antonio, and probably even Pogba.  Bowen is likely to be drafted in the fourth round, but don’t be afraid to take him in the third round if you need to draft a midfielder at that point!

Tomas Soucek was another January signing who excelled after arriving in the Premier League.  And he’s another player we’re backing to continue scoring well on Fantrax.  The Czech midfielder scores really well on defensive statistics such as aerials, tackles, and interceptions, but he also gets forward well.  Soucek scored three goals in his 13 appearances last season!  He looks to be going in the 4th or 5th round of mock drafts, and we would agree he’s on that kind of level.  Soucek averaged over 9 points per game last campaign, and we’re backing him to stay at around the same level.  Potentially a Top 50 player next season!

Looking elsewhere, West Ham has a fair few other assets that should be strongly considered.  Sebastien Haller was the 41st highest scoring player last season, despite missing six games through injury.  The Frenchman struggled after arriving last summer for £45m, but his amazing ability to win aerials was the key to his Fantrax success.  Haller topped the table for aerial wins, with an incredible 218 scored during his 32 appearances.  That’s just under seven aerial wins per appearance!  Haller is worth gambling on in your draft – if he can regain his place in the side he’s a great Fantasy EPL asset.  And speaking of great Fantasy EPL assets, Declan Rice is just that.  The English midfielder has a points floor of around seven points per game and has the ability to achieve double-figure hauls too.  Every Fantrax roster needs a steady scoring player like Rice, and we highly recommend drafting him as your third or fourth choice midfielder!

And now for players that we wouldn’t recommend drafting ahead of the new season!  Felipe Anderson is the main player of note here.  He’s firmly on our “do not draft” list, after a horrible season last time around.  The Brazilian is usually a really good points scorer in Fantrax, but he can’t score points if he’s on the bench!  Anderson doesn’t show any passion or commitment when he plays for West Ham, and therefore he looks to ride the bench.  Manuel Lanzini is a great player, but also looks like he won’t be featuring in Moyes’ starting eleven.  And the same can be said for Robert Snodgrass.  The Scottish midfielder is also a great scorer in Fantrax when he plays, and we would rather own him ahead of Anderson and Lanzini.  Last up is a player who should see a decent number of minutes, but he just doesn’t score well…  Pablo Fornals.  The Spaniard does have some quality, but he just isn’t suited to the Fantrax Scoring System.