October 3, 2019 by The Fantasy Football Chaps Leave a Comment   |  TheFFChaps 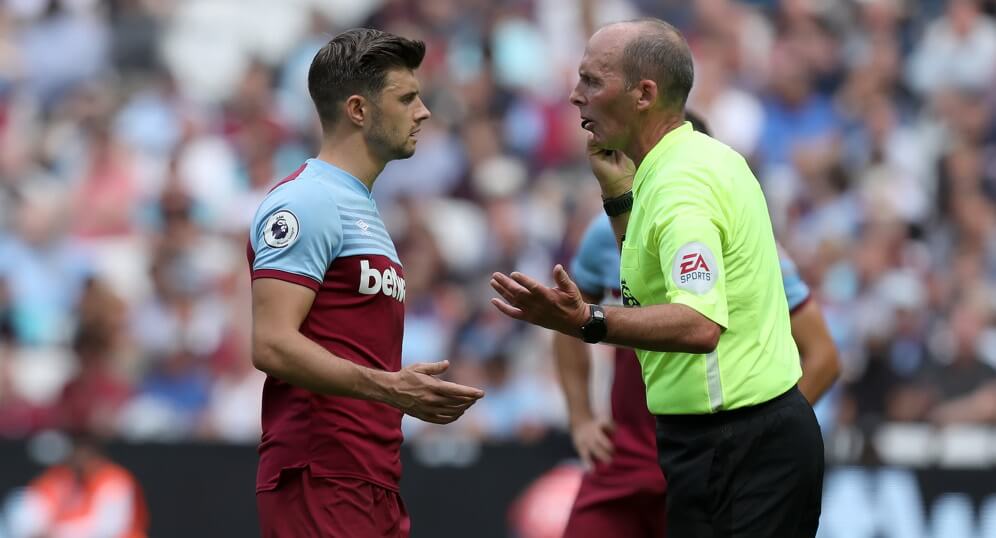 Our weekly Chaps Choices article provides Fantrax managers with a Fantasy EPL Sleepers XI.  These hints and tips will give you a better chance of picking up a victory each gameweek.  Use our starting eleven of Premier League differential picks to find your golden ticket to a big score; one of our Gameweek 8 sleepers could easily make the difference in a Head-to-Head game!

Prospects:  Henderson has been scoring fairly well for a goalkeeper playing for a team tipped for relegation.  He’s not yet hit the heights that Neil Etheridge did last year for Cardiff, but he could provide excellent value.  Sheffield United have been performing very well defensively and managed to largely nullify Liverpool’s attack during their Gameweek 7 defeat.  This weekend The Blades face a trip to bottom of the league Watford, and they will be confident of coming away with a result.  Henderson is a great goalkeeper punt for Gameweek 8, and fully deserving of a slot in our Sleepers XI.

Alternative Choice:  Guaita (33% ownership) is a good alternative here.  The Spaniard has been scoring well in recent weeks and picks up a fair few save points.  We just couldn’t back him coming up against a potent West Ham frontline.  Worth a punt if you’re feeling brave!

Prospects:  Lowton has been scoring very well this season, and is currently the 13th highest scoring defender.  Not bad for someone with 38% ownership!  The Burnley right back has very good prospects, as he’s gained two clean sheets and one assist so far this season.  Fantrax managers are concentrating on the higher scoring Pieters, as well as the bigger names of Tarkowski and Mee.  However, Lowton offers good scoring potential and should be strongly considered as a third or fourth defender for your squad.  This weekend Burnley faces an out of sorts Everton side, and both attacking and defensive points should be on offer for Lowton.

Alternative Choice:  If you can’t get your hands on Lowton for Gameweek 8, then take a look a Frederic Guilbert (36% ownership).  The French right back has gained three double-digit scores during his five appearances so far this season and faces Norwich City this weekend.  Guilbert has shown very good attacking instincts.

Prospects:  We backed Tomori in our Gameweek 7 Sleepers XI article, and he returned 12.25 points.  We’re backing him again, as Chelsea face a trip to Southampton in Gameweek 8!  Tomori has played very well since establishing himself in Lampard’s new-look Chelsea side, and we’re expecting him to improve his output over the coming weeks.  The young center-back featured in our Gameweek 8 Hot Player Rankings too!  Chelsea has a very nice fixture list coming up, and Tomori is a player that may still be available in Fantrax Draft Leagues.  If he is, he needs to be snapped up immediately!  Lampard is finding his feet at the helm of The Blues.  Better performances are coming!

Prospects:  Two goals in two games and Cresswell has gone from a back-up defender with no prospects to a must-have acquisition!!  The Englishman has made the most of Masuaku’s suspension, as he’s bagged back-to-back goals, and firmly established himself in Pellegrini’s best eleven!  Cresswell was featured earlier in the week in our Gameweek 8 Waiver Wire targets article, and we’re backing this up with including him in the Fantrax HQ Sleepers XI!  West Ham faces Crystal Palace at home this weekend, and we’re expecting another double-digit return from Cresswell.  If he’s available in your Fantrax free agent pool, then sign him right now.  Cresswell is a key player for our Gameweek 8 Sleepers XI!

Prospects:  Stevens is the 11th highest scoring defender on Fantrax, and yet his ownership remains below 60%.  We don’t understand this in the slightest… maybe draft managers are just not keen on owning Sheffield United players!  Well, Stevens is scoring extremely well and should be targeted by any Fantrax manager with title-winning ambitions.  The Irishman is likely to finish as a Top 15 defender this season.  We had no qualms about starting Stevens against Liverpool this weekend, and he returned 13.75 points!  This weekend The Blades face a trip to struggling Watford, and we’re expecting another double-digit score from Stevens.  Watford might score, but that doesn’t matter when it comes to Stevens’ Fantrax output.  Sign him up if you can!

Prospects:  We backed Cleverley during our Gameweek 7 Sleepers XI, and he brought home a solid 9 points.  We’re backing the English midfielder once again, as Watford host Sheffield United.  Cleverley looks to be nailed on in the central attacking midfield position for the Hornets, and we’re surprised his ownership is still so low.  He’s a player that should absolutely be taken in any competitive Fantrax league!  If he is still a free agent, then he’s a solid signing and will serve you well as a third or fourth choice midfielder.  Cleverley should gain a decent score this weekend.  If he can add a goal or assist, he’s sure to score 15 points or above.  We know Watford are struggling at the bottom of the league, but a home fixture against a newly promoted team is exactly what they need to kick-start their campaign!

Prospects:  Now here’s a Chap that will almost certainly be a free agent in your Fantrax Draft League.  And therefore, he’s a great person to highlight for this Gameweek 8 Sleepers XI!  Leitner has performed fairly well during his appearances for Norwich so far this season.  The German is a very talented player and was known as a bit of a wunderkind as a youngster whilst at Dortmund.  If Leitner can add attacking returns to his game, he could be a very decent points scorer.  His counting statistics are decent, and Norwich will be confident of beating fellow newly-promoted side Aston Villa this weekend.  If you’re after an under the radar punt, we’d suggest taking a good look at Leitner.  He controls the play in the Norwich midfield and could turn into a decent fourth or fifth midfielder on the Fantrax platform.

Alternative Choice:  Another under the radar pick for those of you in larger leagues… we bring to you John Fleck (2% ownership).  The Sheffield United midfielder has returned to the side for the last three games and has averaged 9.17 points per game.  Worth a punt for the Watford game if you’re struggling for a midfielder!

Prospects:  Nakamba has started the last three games for Villa, and looks to be a safe bet for a fourth or fifth midfielder in deeper Fantrax Leagues.  The Zimbabwe international midfielder has averaged 7.67 points during his three games, but its the score of 10.5 points in Gameweek 7 that has got draft managers interested.  If Nakamba can continue to produce key passes to go alongside the tackles and interceptions, he could be a great asset for the coming weeks and months.  Draft Genie has already highlighted this earlier in the week, during his Waiver Wire Targets, and we’re fully on board.  This weekend Aston Villa face a trip to Norwich, and Nakamba has a good chance of picking up excellent points once again.  With just 3% ownership, he’s a great addition to our Gameweek 8 Sleepers XI!

Alternate Choice: If you fancy a bit of a forward-thinking punt, then perhaps Marc Albrighton (6% ownership) takes your fancy.  The Leicester man returned to the team in Gameweek 7, coming off the bench to bag an assist and 13 points.  With The Foxes on great form, and a great fixture list coming up, Albrighton may be worth a punt ahead of Gameweek 8!

Prospects:  El Ghazi is another player we successfully backed in Gameweek 7, as he scored during Aston Villa’s 2-2 draw with Burnley.  The Dutch winger bagged 10.5 points, to gain a fourth successive double-figure return!!  El Ghazi hasn’t been playing incredibly well from a real-life perspective, but he has been putting in great scores on Fantrax!  This weekend Dean Smith’s men face a trip to Norwich, and we’re expecting Villa to score a goal or two.  El Ghazi is sure to be involved in the final third, and has a good chance of gaining another double-digit return!  He’s a good signing for any Draft Manager ahead of Gameweek 8.

Prospects:  Wood has bagged three goals in his last two games, after struggling for the first five games.  If Wood is a free agent in your Draft League, sign him up.  If a fellow manager has hastily dropped him, sign him up.  39.5 points in his last two games!!  This weekend Burnley face an Everton side on poor form, and there’s a good chance Wood can add another goal to his tally.  The big Kiwi is very goal dependent, but we have to back him this weekend.  The Clarets face Leicester and Chelsea after this weekend, but then have four very good fixtures on the bounce.  If Wood is a free agent in your Fantrax Draft League, he’s well worth signing up.

Prospects:  Welbeck makes his debut in our Sleepers XI for our Gameweek 8 picks!  The Watford forward made his first Premier League start for the club in Gameweek 7, and scored a respectable 8.5 points without gaining attacking returns.  This weekend Watford face newly-promoted Sheffield United at home, and we’ve simply got to back Welbeck.  Considering the poor form of The Hornets, Welbeck just has to start.  Andre Gray hasn’t been performing, and Deeney is injured.  Welbeck was also featured in our Gameweek 8 Waiver Wire Targets, as he’s a great punt for this weekend, and beyond. 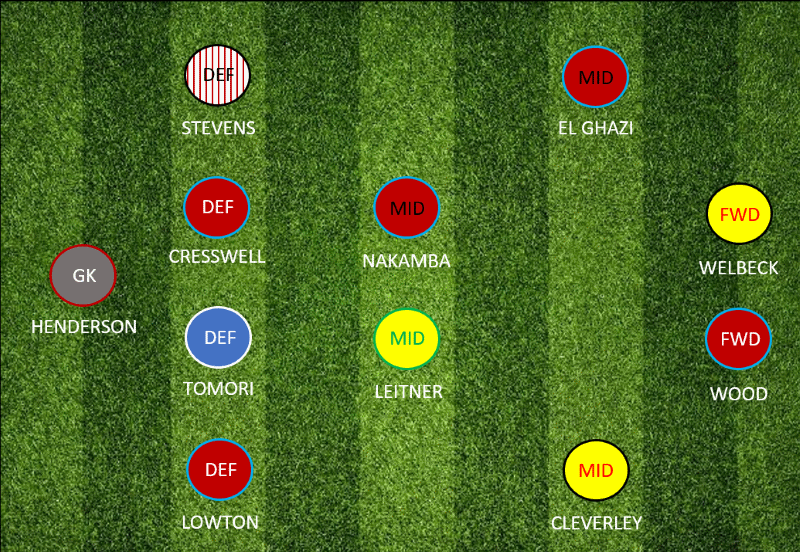