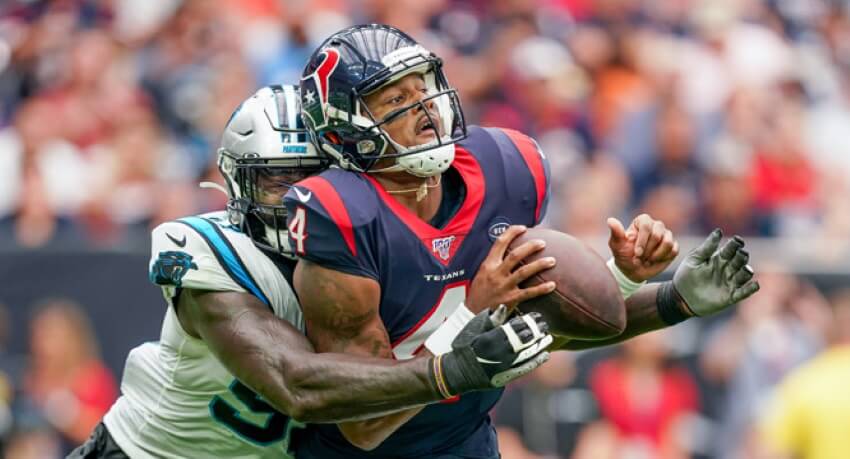 Have things gone sideways on you? Gary Davenports Week 5 IDP sleepers will help you get them straightened out.

It seems like only yesterday that the 2019 NFL season was just getting underway. Yet here are we—already on the cusp of the fifth week of the fantasy campaign.

And for some teams, do or die time is already here.

It wasn’t supposed to be that way. You thought the draft went pretty well. You had a team that was going to compete for at least a playoff spot. Maybe even a championship.

Trophies. Prize money. Groupies. It was all there for the taking.

Then the season started.

Indianapolis Colts linebacker Darius Leonard didn’t produce at his 2018 level and then went down with a concussion. Kansas City Chiefs defensive end Frank Clark didn’t post close to the numbers in his new home that he did in the old one. Atlanta Falcons safety Keanu Neal suffered a season-ending Achilles tear.

Just like that, a once-promising season was in tatters. Your team now sits at 1-3 or 0-4 and on the edge of the abyss. You need a win in the worst way. And to get that win, you need some spot-starters you can use to plug holes and get things back on track.

Players like these Week 5 IDP Sleepers who are owned in 20 percent or less of the IDP leagues at Fantrax.

For help getting ready for NFL Week 5, check out our Week 5 Waiver Wire Recommendations and our Week 5 FAAB Guide.

Through four weeks this season, the Panthers are tied with the New England Patriots for the NFL lead in sacks with 18. And as Scott Fowler reported for the Charlotte Observer, it’s been Addison who has been the centerpiece of Carolina’s surprisingly potent pass rush.

“Defensive end Mario Addison, in particular, has been winning his one-on-one battles,” he wrote. “All five of Addison’s sacks over the past two weeks have been on basic four-man rushes where Addison simply beat his defender and/or was helped out by tight coverage that forced the quarterback to hold the ball a little longer. Addison has been the Panthers’ clear pass-rushing standout. His 5.5 sacks through four games are more than double any other teammate. He ranks third in the NFL in total sacks.”

Fourteen of Carolina’s sacks on the season have come over the past two weeks in wins over the Arizona Cardinals and Houston Texans—a span over which the 32-year-old has piled up five sacks. The Jaguars aren’t a great fantasy matchup for defensive linemen, but with the way Addison’s playing you have to ride the hot hand.

Over four seasons in the NFL spent with three teams, Williams had never gotten to the quarterback. Over the past three games, he’s done so four times, including twice in last week’s win over the Minnesota Vikings. Per Chris Emma of 670 The Score, the 29-year-old Williams is enjoying this most unexpected of rides.

“I pride myself on coming in here every day and just being the best me I can for this team,” Williams said. “I really have a lot of respect for the Bears organization, Ryan Pace taking a chance on me.  I’m just happy that the Bears have me here.”

Pressed into action by injuries to Bilal Nichols and Akiem Hicks, Williams has amassed 12 total tackles to go along with those four sacks the past three weeks—numbers that slot him inside the top five defensive linemen over that span. With the Bears on a bye after this week’s game with the Raiders, it’s likely that Williams will get at least one more chance to shine full-time.

The New York Giants have been besieged by injuries at inside linebacker. First Alec Ogletree pulled his hamstring two weeks ago against the Tampa Bay Buccaneers. Then his replacement Ryan Connelly tore his ACL against the Washington Redskins. As Mike Woellert wrote for 4for4, that could leave David Mayo as the last man standing in a favorable matchup with the Minnesota Vikings. Such is the thing IDP sleepers are made of.

“The Giants are running thin at linebacker and David Mayo could get all of the snaps he can handle – especially with Ryan Connelly going down for the season,” he wrote. “Alec Ogletree’s status is also up in the air. Mayo ended up appearing in 69% of the snaps last week and recorded a 22.9% tackle rate. If he’s not going to have much competition for tackles this week, he’s in line to produce like a top LB. The Vikings offense is yielding 15 solo tackles per game to opposing LBs. Mayo should be busy tackling Dalvin Cook this week.”

Mayo played 35 snaps last week against the Redskins, finishing with eight tackles. Against a Vikings team that will be looking to get Dalvin Cook back on track, Mayo could be the most unexpected of IDP life preservers.

With Vontaze Burfict staring at a season-long suspension, there’s been a shakeup at linebacker for the Raiders. Veteran Tahir Whitehead will move to the middle, while Nicholas Morrow will step into a three-down role. Head coach Jon Gruden told Evan Groat of SB Nation that the 24-year-old is up for the increased snap count.

“We like Nick, man. I think Nick is on the rise,” Gruden added. “He’s good in coverage. He’s quietly moving up the ranks in this league and in this organization. He’s certainly the next guy up and we don’t hesitate to put him in a game at all. He just makes plays. His instincts in finding the ball is really good. He’s a good blitzer. He’s extremely athletic. He’s comfortable in space. Good one-on-one tackler. He’s a better tackler than you’d think. He plays a lot bigger than he looks.”

Morrow played over 60 snaps last week against the Indianapolis Colts, tallying seven total tackles (six solo). If you think the Bears could be staked to a lead Sunday in London, there’s a good chance Morrow can better that stat line in Week 5.

The Browns haven’t had starting strong safety Morgan Burnett since Week 2. But one of the heroes of the team’s big Week 4 win in Baltimore was reserve safety Jermaine Whitehead. Head coach Freddie Kitchens told Andrew Gribble of the team’s website that he’s not surprised the team is getting such big contributions from bench players.

“That’s what we expect out of our guys,” Kitchens said. “We don’t care if they’re backups or not three weeks ago – they’re playing. They’re good enough to play, so we expect them to play well. They expect that out of themselves, so why should we not expect that out of them? What are we doing? Are we putting somebody out there that we don’t trust? No, hell, he’s on the field, so we expect him to play well, you know?”

Whitehead was everywhere against the Ravens, making eight tackles, forcing a fumble and skying for an interception. Whether it’s the third-year pro or Burnett (who also falls below the 20 percent ownership threshold), this week’s matchup with the Niners is a good one—San Francisco ranks inside the top-five in fantasy points per game given up to defensive backs making Whitehead one of my favorite IDP sleepers for the week.

The Indianapolis Colts weren’t left with much to be happy about after losing at home to the Oakland Raiders in Week 4. But as Kevin Hickey wrote for Colts Wire, the play of rookie safety Khari Willis was a bright spot on a dark day.

“Filling in a starting role as Malik Hooker works his way back from a knee injury,” Hickey said, “Willis got the chance to prove he can handle a starter’s role. He did just that on Sunday shining as one of the few stars on the defensive side of the ball. The Michigan State product finished with nine tackles (eight solo), a tackle for loss and a pass defended. His most impressive play came when he quickly diagnosed a screen play. He came crashing downhill to tackle the receiver behind the line of scrimmage almost immediately after he caught the ball.”

The Colts won’t just be without Hooker for Sunday night’s trip to Arrowhead to meet the unbeaten Chiefs—strong safety Clayton Geathers could also miss the contest due to a concussion. That could set up Willis for a huge evening—rumor has it that Patrick Mahomes and the Chiefs have been known to throw the ball down the field on occasion.

Got a few IDP sleepers of your own? Don’t be [email protected] Share them out in the comments below. We promise we won’t let anybody from your league read this column… Really…