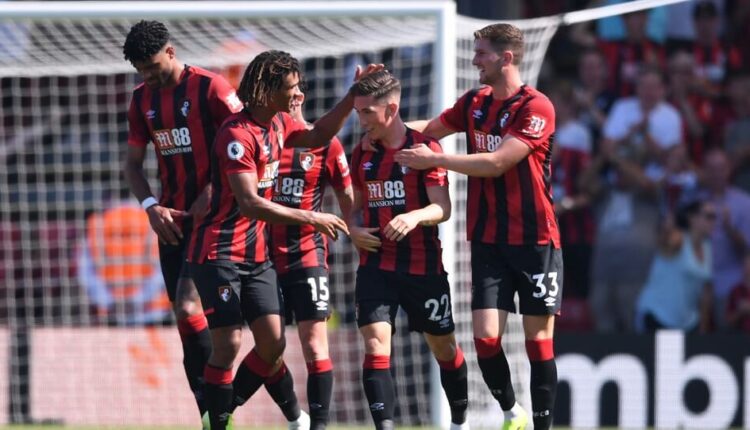 Prospects:  Confidence will be high at Crystal Palace after the GW3 victory over Manchester United.  The Eagles put in a great performance and picked up a famous victory at Old Trafford.  We’re backing Guaita for a good points haul this weekend, as Crystal Palace host Aston Villa.  The Villains have been on decent form so far this season, so we would expect Guaita to have to make a fair few saves, and earn himself a decent points tally.  We think the Eagles will have enough to make to two wins from two, and a clean sheet to go with the potential save points should be achievable.  Guaita is the best low ownership goalkeeper to target for GW4 if you’re streaming this position throughout the season!

Prospects:  Premier League veteran Young came on as a first-half substitute for the injured Shaw during Manchester United’s GW3 defeat at home to Crystal Palace.  Now, obviously that’s a shocking result for the Red Devils, but Young actually put in a really good performance during his 55-minute appearance.  The Englishman produced five key passes, as well as three accurate crosses, en route to an 11.5 score.  Shaw has now been ruled out for a few weeks, so Young will have a chance to build up this performance.  This weekend Manchester United face a trip to Southampton, and we’re backing them to get back to winning ways.  Taking a punt on Ashley Young could easily pull off this weekend!

Prospects:  Caglar Soyuncu has played extremely well since taking over from the departed Harry Maguire.  The Turkish defender was largely poor during his debut campaign last season but has really upped his game after being given a shot in the side.  The Turkish defender also features in our Hot Player Rankings.  Soyuncu has averaged 13.2 points per game so far, with a monster score of 23 points gained in GW3!  Nine aerials and eight clearances, as well as an assist for Harvey Barnes’ wonder strike.  This weekend Leicester face the inconsistent Bournemouth.  We’re expecting The Cherries to score, but Soyuncu has shown he can score well without the need for a clean sheet.  The Foxes defender should be a mainstay in defense this season.

Alternative Choice:  Kurt Zouma (49% ownership) is worth a mention here.  The Frenchman scored very well last season whilst on-loan at Everton, but it hasn’t really happened for him, or the Chelsea defense, so far this season.  A home fixture against newly-promoted Sheffield United is an ideal opportunity for Zouma to pick up his first double-digit return of the season!

Prospects:  Schlupp returned to the Crystal Palace starting lineup for the GW3 victory at Old Trafford and scored extremely well.  The defender playing in midfield bagged an assist, as well as one key pass and three aerials won.  The Ghanaian performed very well towards the end of last season, before suffering an injury, so we’re glad to see him back in action.  A return of 14.25 points in his first start of the season is extremely encouraging.  Crystal Palace faces Premier League new boys Aston Villa this weekend, and confidence will be high after beating Manchester United.  We’re backing The Eagles to pick up another win, and Schlupp to perform well.  He’s a great Fantasy EPL GW4 Sleeper XI pick, as well as for the coming months.

Prospects:  We backed Masuaku in GW3, and he delivered a solid 9 point return during West Ham’s win against Watford.  We’re backing the Congolese left back once again as The Hammers host Norwich this weekend.  Masuaku has been statistically very good in his two games so far this season, earning points for an even spread of interceptions, clearances, aerials, and tackles!  The Hammers earned their first win of the season against Watford, and we’re backing them to make it two wins in a row as they face Premier League new boys Norwich in GW4.  We’re expecting another decent score from Masuaku, and he has potential to perform very well in our GW4 Sleepers XI.

Prospects: Here we have an essential GW4 Sleeper XI player!  Jota made his first Premier League start for Aston Villa in GW3, and he inspired them to their first points of the season.  The Spaniard supplied one assist, as well as two key passes and four successful dribbles during the 2-0 victory over Everton.  The enigmatic winger has had to wait a couple of weeks before getting a proper chance in the starting lineup, but we think he’ll be there to stay now.  This weekend Aston Villa face a trip to Crystal Palace.  We don’t think Dean Smith’s men will make it two wins in a row, but Jota should still put in a good performance.  We’re expecting his ownership to shoot up ahead of GW4 – snap him up while you still can!  The Spaniard featured in our GW4 Waiver Wire Targets article… hopefully your fellow managers have been caught sleeping if he’s still a free agent!

Prospects:  This is surely the final time we’ll be able to feature Norwood, based on our 60% ownership or under rule!  The Sheffield United midfielder is an absolute beast on Togga scoring over on Fantrax!!  Norwood has gained 32.5 points over his three games so far, without a single attacking return.  The Englishman’s statistics are very good, and he impresses across pretty much the whole scoring system.  Norwood has been featured as a midfielder to target by the @the_innergeek in his Underlying Numbers article for GW4.

The Blades face a trip to Chelsea this weekend, and Norwood should still score well despite the Top Six opponent.  If this Chap is still a free agent in your Draft League, he has to be acquired immediately.  The Fantasy EPL Sleeper of the season so far!

Prospects:  Christian Atsu took full advantage of an injury suffered by new signing Saint-Maximin in GW3.  The Ghanaian winger made his first appearance of the season and racked up a huge 17 points haul in the victory over Tottenham.  Three key passes, as well as the assist for Joelinton’s goal, is very promising.  Newcastle face Watford at home this weekend, and considering The Hornets have lost every game so far this season, Atsu looks to be a good acquisition.  If you’re feeling brave, take our GW4 Sleepers XI advice, and pick up Atsu for a one week punt!  If he can find some form for the second week in a row, he may even be a good option for the coming weeks.

Prospects:  Two stunning goals in two Bournemouth appearances for young Harry Wilson!  The Liverpool loanee has scored a huge 30 points in his two games for the Cherries so far.  Wilson only came on as a substitute in GW3, but he gained good points mainly due to his great free-kick goal.  The youngster also gained two key passes and one accurate cross.  This weekend Bournemouth face a trip to Leicester, and we expect Wilson to start this game.  The right winger is obviously very talented, and he looks set to establish himself in the Bournemouth side whilst David Brooks is injured.  We’re not sure what will happen once Brooks is back, but for now, Wilson is a great Fantasy EPL prospect.  Sign him up if you still can!

Prospects:  In GW3 Yarmolenko made his first start for West Ham since suffering a serious injury last season.  The Ukrainian international only played 55 minutes but racked up an impressive 11 points on Fantrax.  This was enough for @DraftGenie to feature Yarmolenko in his Waiver Wire Targets earlier in the week, and we can see why.  If he can establish himself on the right wing for West Ham, Fantrax managers could have a great little prospect on their hands.  Antonio suffered an injury in the Carabao Cup tie against Newport, which only enhances Yarmolenko’s prospects.  In GW4 West Ham face a leaky Norwich City defense, and therefore Yarmolenko is a great option for our Fantasy EPL Sleepers XI.  Sign him up if you still can!

Alternative Choice:  If Yarmolenko is taken by a fellow manager, and you still fancy West Ham against Norwich, then Mark Noble (11% ownership) could be a good option.  The veteran midfielder made his first appearance of the season in GW3 and scored a penalty early on in the game.

Prospects:  With Watford captain Troy Deeney out injured for the foreseeable future, Andre Gray should get a good run in the side up front!  In GW3 Gray bagged a goal, as well as three key passes, en route to a great score of 17.5.  Hopefully, this is a sign of things to come!!  Obviously Watford is currently bottom of the league, but a trip to inconsistent Newcastle offers them a chance to kick-start their season.  We’ve highlighted Gray as a good waiver wire target earlier this week.  If he’s still a free agent in your Fantrax League, he’s well worth a punt!

Alternative Choice:  If Gray has indeed already been snapped up, then Welbeck (8% ownership) and Hughes (15% ownership) offer decent alternatives.  Welbeck is more of a longer-term punt, whereas Hughes is a short term punt.  Record signing Sarr could soon take Hughes’ place in the side! 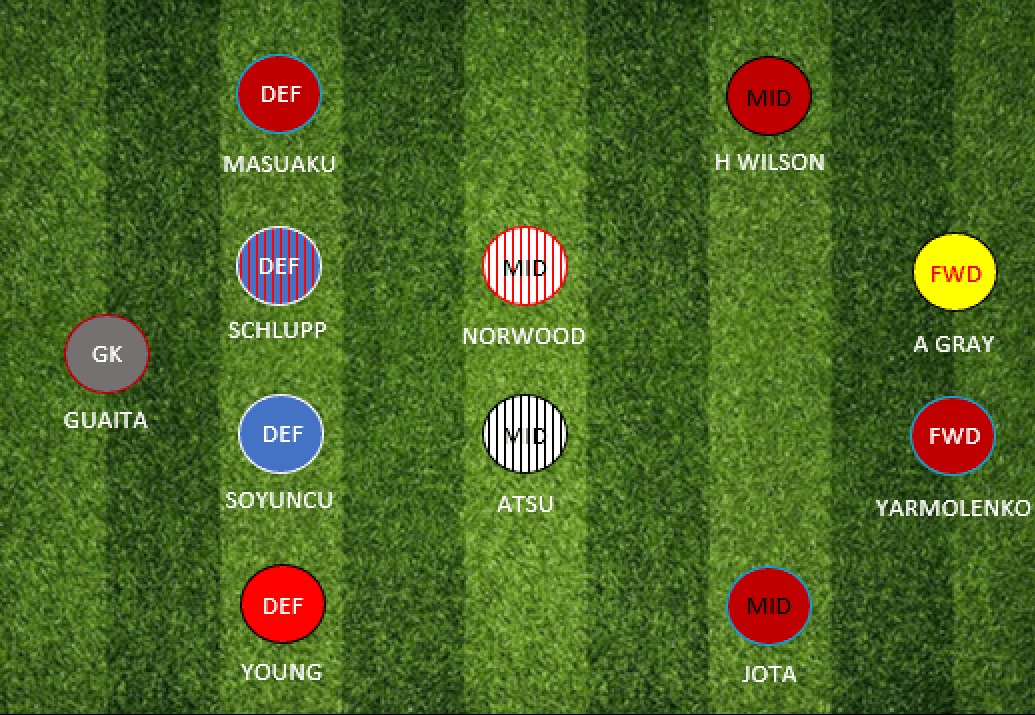