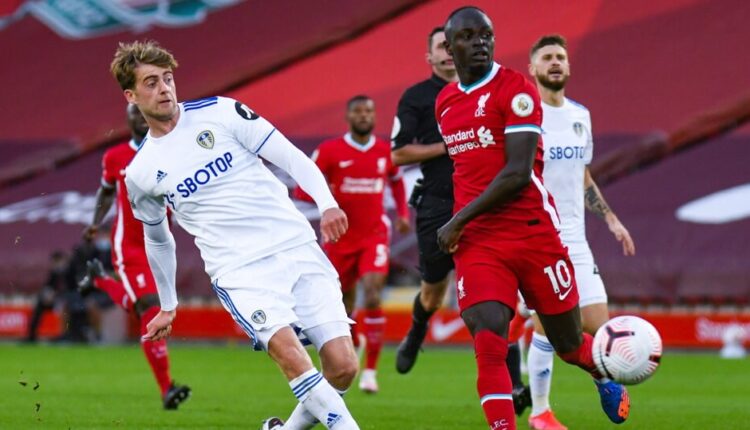 Yes, yes, we know: we are too good to you people here at Fantrax! Not only do we give you the wise words of the Kickaround Pod, the astute analysis of Genie’s Waivers, the informed insights of the Chaps Sleepers XI, and the must-read musings of Totti’s Starts and Sits, but NOW we are providing you a preview of your very own personal league. Okay, enough of the alliteration. Hopefully, you know the score: on Monday we gave you the opportunity to win a written preview of your league’s matchups, and you got back to us admirably. We chose Ramnarayanan as our Community Special winner this time, so here is that preview…

P.S. Even if this isn’t your league there should still be some useful tips for Gameweek 4!! 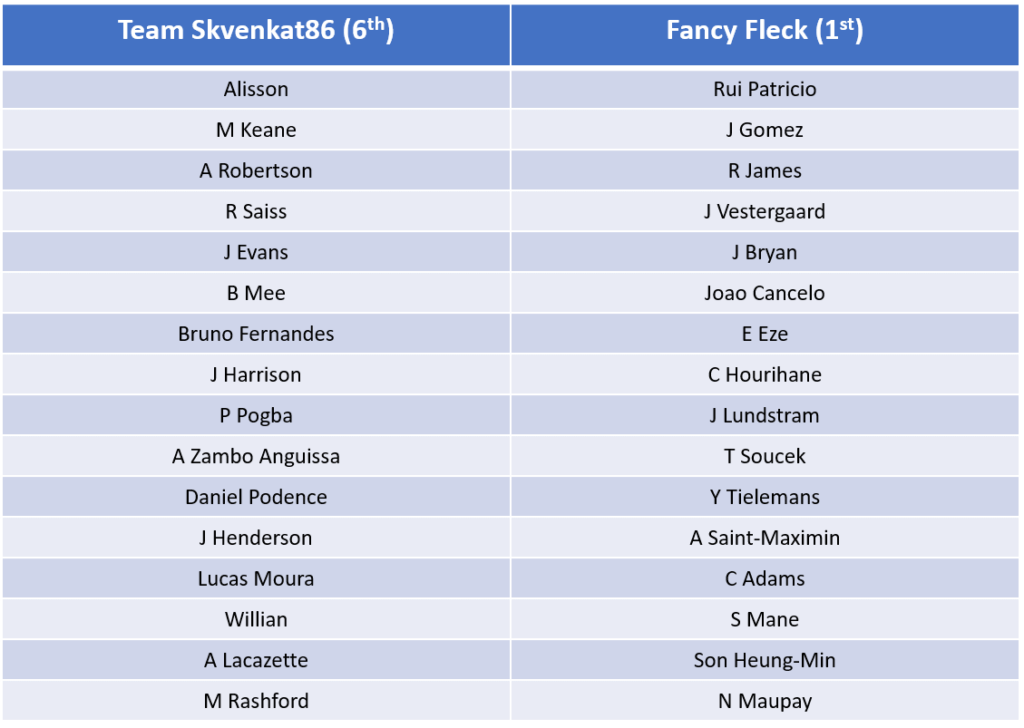 Fancy Fleck sits in 1st place, unbeaten with 3 wins from 3. You know who’s unbeaten in real life? Aston Villa. Point being: the league table means nothing right now. Son’s injury is a blow for Fleck, though the trip to Old Trafford might not have brought much in the way of fantasy points anyway. Bigger concerns are in midfield, where Hourihane (vs Liverpool), Eze (vs Chelsea), and Soucek (vs Arsenal) all face tough games. Soucek, by the way, was acquired in a trade with Sir Ole for Mason Mount…position for position trades are always interesting as it means there’s clearly a difference in valuation. I think I prefer the Soucek side of this, but it’s a close one! I fancy Fleck to still put up an average/above-average score, but for them to get the win they’ll need ASM to return to his 2019-20 version, and a few goals from Adams and Mane up top. It’s more than do-able.

Ironically, Skvenkat86’s win could come down to the damage done by Willian and Lacazette on real-life Fleck’s Sheffield United team. I’m not the only person to think Chris Wilder’s men may have been found out, and a comfortable win for Arsenal could easily see a 30+ pointer from the Gunners duo. Nice matchups in defence should see a fair few clean sheets, though with each team owning Liverpool and Wolves assets in this position, it could be the performance of Evans and Mee that give Skvenkat86 the edge. Podence’s status could prove pivotal.

Community takeaway: Hourihane has been a revelation for Villa and for fantasy owners, but he’s the one most likely to miss out if Ross Barkley is able to take a spot in Dean Smith’s starting 11. The other consequence of this? Jack Grealish’s value probably goes even higher as he’s likely to take over as primary set piece taker. With Hourihane up against Liverpool this week, Fancy Fleck may already have seen the end of the Hourihane Honeymoon. 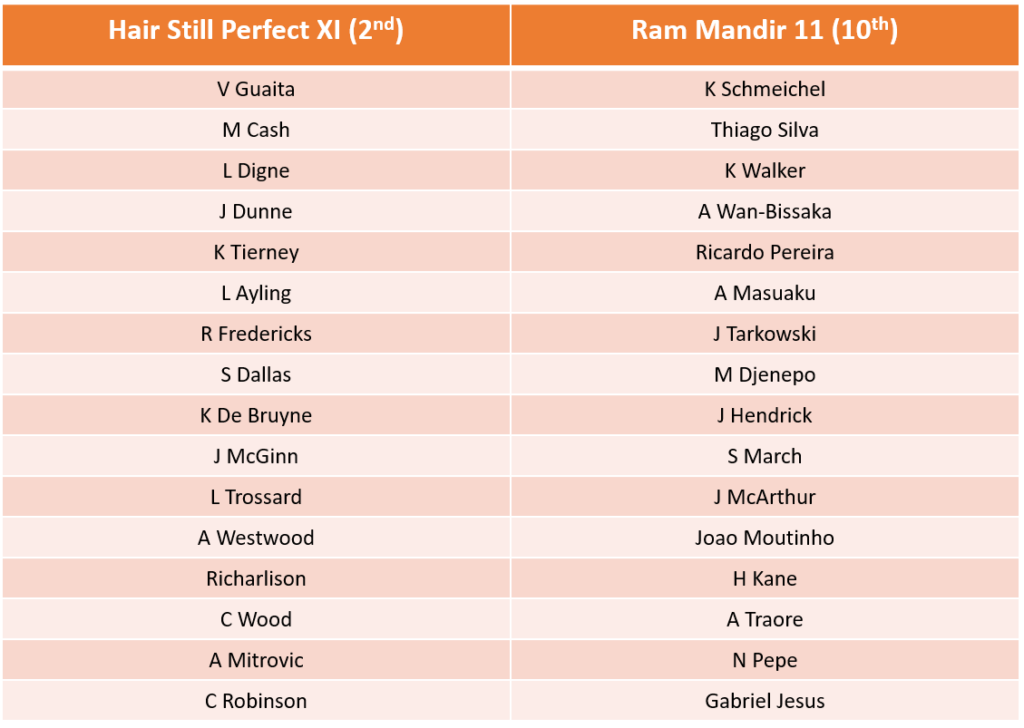 Want some entertainment but not fussed about quality? This is the game for you. Both teams are going to underwhelm, with scores that should be beaten by most of the league, but it’ll be mighty close and go right down to the wire. Unfortunately, one of them is still going to take home the three points, and my money is on Ram Mandir because of one man: Traore. Back in his role up top, he could have a field day against Fulham (think, 40+ points). This is just as well because the defense consists of Thiago Silva and Kyle Walker (why?!?) and the midfield contains names like Hendrick, March, and McArthur. Some would say these are unfashionable but productive. I would say unfashionable is being very kind. On the plus side, Ram look set to capitalize on the number 1 waiver selection*…I vote James Rodriguez. The midfield needs the help.

Having said all that, the soon-to-be patented Inner Geek Gameweek Preview Calculator has predicted the win for Ram, and hence, the loss for Hair Still Perfect. Why? Especially given that HSP hold KDB – the man who will no doubt end up as unanimous MVP of the league. It’s probably down to the matchups of the whole squad (the Leeds duo face Man City, the Villa duo face Liverpool), so if HSP makes the right team selections, this could well be a victory rather than a defeat. For starters, it might be worth getting a different goalkeeper. Guaita vs Chelsea is an accident waiting to happen.

Community takeaway: It’s easy to make sweeping statements (and therefore take sweeping fantasy actions) on the back of one or two early results. A great example of that is Manchester City, with many pundits already claiming that this is a great time for Leeds to play them. Yes they have injuries, but I don’t buy that. City can easily shut down HSF’s Ayling and Dallas (and any other Leeds assets) to the tune of 5 points or fewer…making this matchup essentially 9 vs 11.

*This league has a rule where new transfers to the Premier League post-draft day have been kept on the waiver wire until the transfer window closes. After which, reverse league table order determines priority. 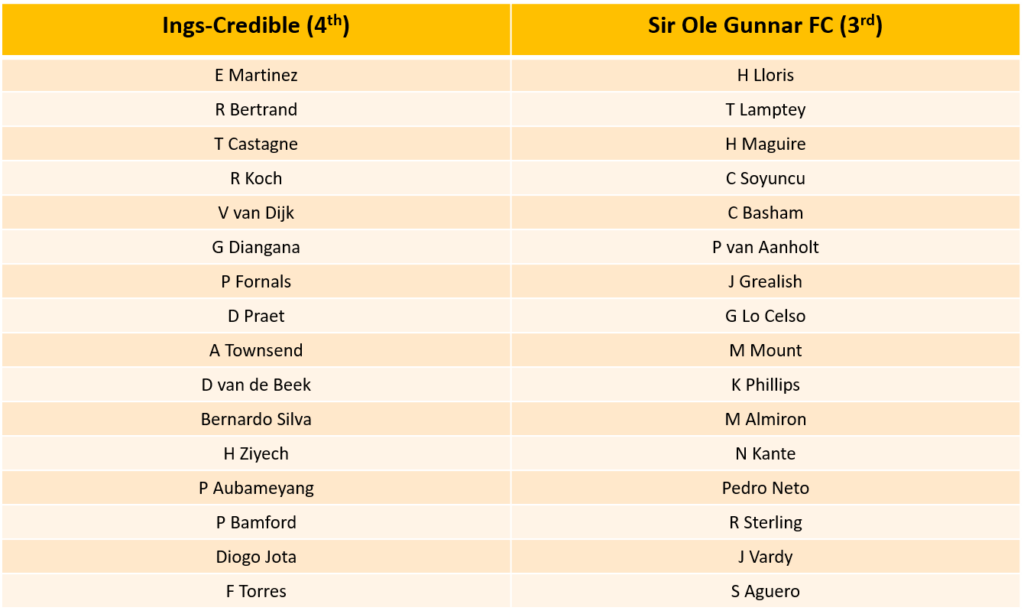 Let’s address the team name to start. Sir Ole Gunnar FC? I can only assume this is an Arsenal fan celebrating the fact that United are still sticking with that lovely yet egregiously underqualified excuse for a manager (too harsh?). Anyway, if the manager is indeed unfortunate enough to be a United fan, then at least they will be able to console themselves with a fantasy win this weekend. Sir Ole is seriously top-heavy this weekend, with some nasty matchups in defense more than made up for by a forward line that consists of Sterling (vs Leeds!), Vardy (vs West Ham!), and Neto (vs Fulham!). Oh, and they have Aguero injured on the bench too. Side bet of the weekend: Sir Ole’s three forwards will score more points than the other 8 players in the team combined.

Ings-Credible may have a much better team name but the squad they’ve put together is not. Aubameyang is premium, van Dijk will be solid, and Diangana and Castagne look to be two unknowns that will pay off. But the rest, right now at least, are less productive. The midfield badly needs Bilva playing and Ziyech back otherwise it is a sorry state. Likewise, the forward line is worrying. Once Bamford’s Pukki-esque run ends, it’s basically just Auba plus substitute (Ferran Torres) plus Origi (sorry, I mean, Diogo Jota). It’s a sad state of affairs made worse by the fact that they have only just traded Bamford in for McNeil! (This, people, is the definition of the sell high, buy low trade!). They are also in the unenviable position of being the only team to have TWO of Totti’s sits of the week in their squad (Bamford and Fornals). If Leicester don’t get a clean sheet and Auba doesn’t get on the scoresheet, Ings-Credible doesn’t stand a chance. In fact, even if those things do happen, they still won’t win. They may have the best team name in the league, but unfortunately, they’ll end the weekend with the lowest score in the league.

Community takeaway: On the topic of Bamford…yes, maybe his purple patch extends a little longer. Perhaps you sell and he returns a couple more 10+ point hauls. In the long run, you are more than likely to benefit. Most indications are that Bamford’s form is not sustainable, and like with Pukki last season, if you don’t sell high, you may end up persevering for far too long, or worse, just dropping him to the free agent list come January. It was a great trade by the Red Devils to get in McNeil for him.

Red Devils vs Are Oh Samba!! 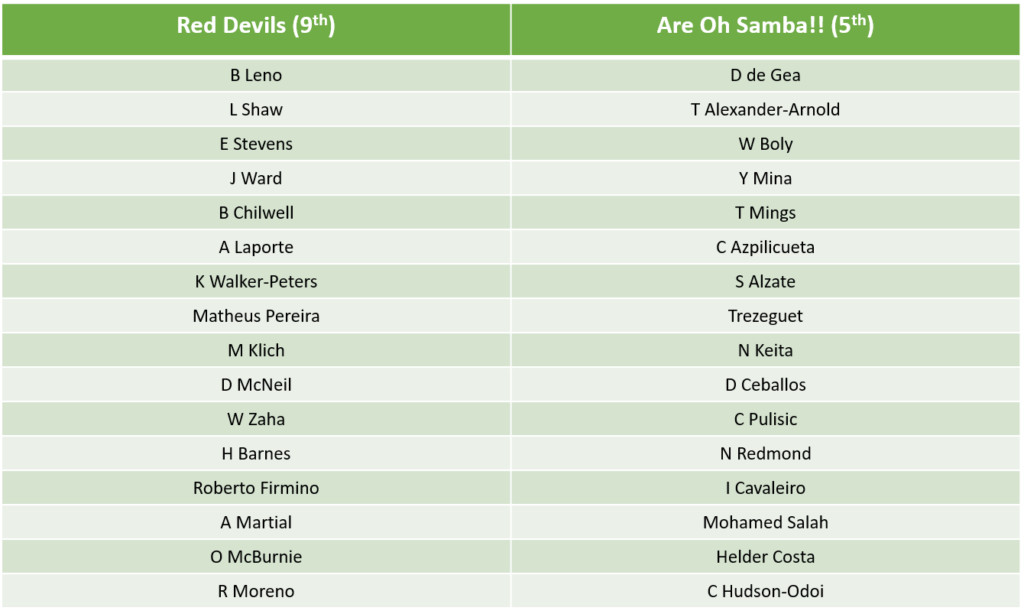 Some nice pieces in place for the Red Devils here. Chilwell and KWP should be good defenders going forward, and the midfield should be solid at worst, with the potential to boom. The front line is Martial for now, though we should surely see Wilder revert back to McBurnie soon, given the Blades’ woes so far this season. The Red Devils will also want to see the return of Chilwell and Laporte, otherwise, they will likely have to field some combination of Stevens (vs Arsenal), Ward (vs Chelsea), and/or Shaw (vs Tottenham). I’m backing Harvey Barnes to continue his good start to the season and carry the team to a good score.

On the other side we have Are Oh Samba!!, a team which I’m hoping is a tribute to the legendary Championship Manager player Cherno Samba, but which I’m guessing is probably named after the ex-Blackburn defender Christopher Samba. Or perhaps the manager’s just a big fan of Brazilian music. I digress. Are Oh Samba have a rollercoaster of a team: 5 of these guys could hit 20+ points (TAA, Azpi, Boly, Salah, Pulisic if fit), and 5 could be lucky to get 2 points. Trezeguet, Mings, Alzate, Cavaleiro, Costa…some of these may have started well, but there’s a reason they weren’t getting drafted. The manager may need to drop a few because that strategy isn’t going to lead to a win this week.

Community takeaway: A lot of 40-60 midfielders in this matchup. That is, players ranked by our Fantrax experts in the 4 to 60 range in the pre-draft top 200 rankings. How does that order look after three weeks? My thoughts are: 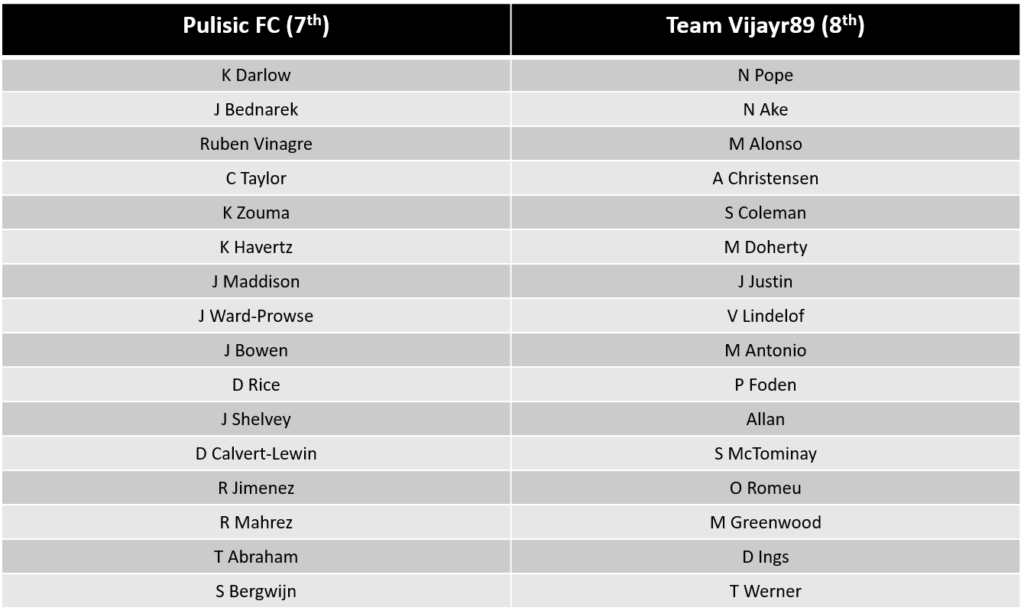 First up on Match of the Day this week is Pulisic vs Vijayr89. These two teams are going to play out a classic, high-scoring game in which the loser may well end up with the week’s second most points. Pulisic has a loaded team and an embarrassment of riches up top. DCL, Jimenez, and Mahrez should inflict some serious damage, whilst the midfield is also stacked. When you’re leaving Bowen on your bench (which is likely unless there are some surprise team selections IRL), you know you have some talent available. Even the defense should be looking at two clean sheets minimum (Darlow vs Burnley, Bednarek vs West Brom, Vinagre vs Fulham, Zouma vs Palace, and Taylor vs Newcastle). This is one of those weeks where you wish you could save a couple of these matchups for another time. The week’s top score is incoming for Pulisic – perhaps a big surprise given that they’ve failed to break the 100 mark so far this season!

The unlucky opponent having to take on Pulisic is Vijayr89, who should put up an above-average score themselves – something that is hardly likely to console the manager given that it will drop them to 1-and-3 for the season. Vijay has an okay team but that midfield needs some serious help. With the right moves (there are 5 players here – minimum – that could be dropped to the free agent pool) Vijay can put together a nice squad. I’m backing the team to score a very respectable century (the front 3 and back 3 – Coleman, Doherty, and Justin) have excellent matchups, but Antonio and Foden can’t carry the midfield alone.

Community takeaway: Vijayr89 are carrying 7 defenders…it’s an interesting strategy that we also saw in Gameweek 2’s Community Special. But for the strategy to work, I think the midfield and forwards need to be bankers, and the defenders need to be streamable ones that can be picked up and dropped without thought. Here, Doherty, Coleman, and Justin are, if anything, too good as defensive options, with the consequence being that the midfield is not reliable enough.