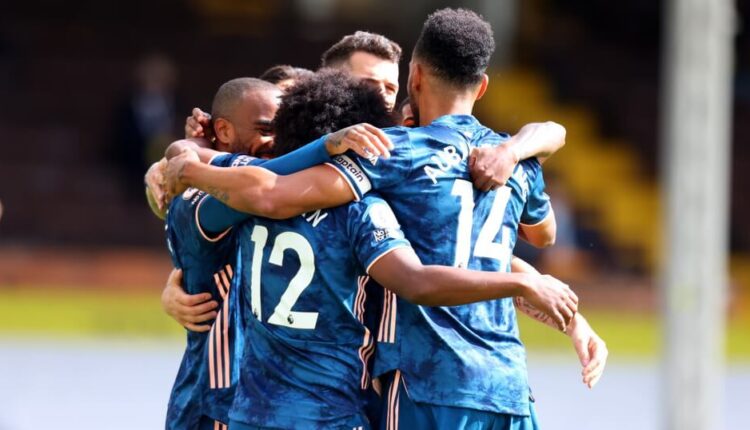 Yes, yes, we know: we are too good to you people here at Fantrax! Not only do we give you the wise words of the Kickaround Pod, the astute analysis of Genie’s Waivers, and the informed insights of the Chaps Sleepers XI, but NOW we are providing you a preview of your very own personal league. Okay, enough of the alliteration. Hopefully, you know the score: on Monday we gave you the opportunity to win a written preview of your league’s matchups, and you got back to us admirably. We chose – in a completely impartial manner – Ari Jonsson to be our first, “lucky” (??) winner, and here is that preview…

P.S. Even if this isn’t your league there should still be some useful tips for gameweek 2 (and general fantasy football)!! 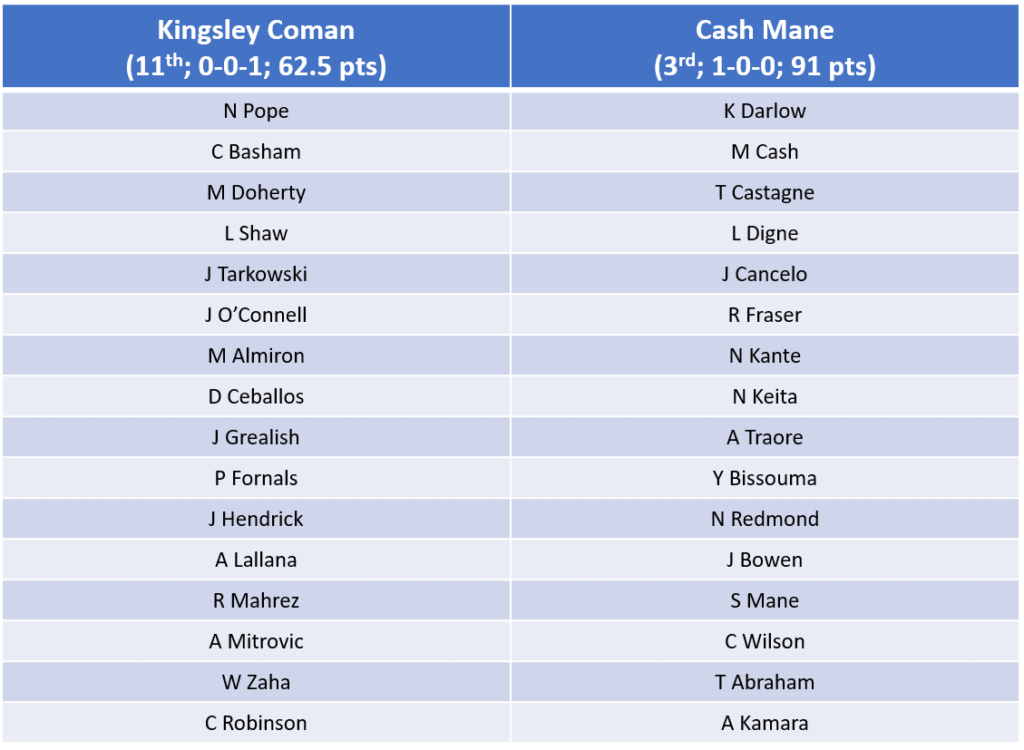 Calling it now: this game gets separated by less than 5 points. It’s going to be heartbreak for someone – especially as they’ll both put up an above-average score. This whole match could rest on whether Mahrez starts, and unfortunately for Coman, the City game is the last of the weekend. It’s a horrible position to be in tactically, and it adds to some other big decisions for the manager who has to figure out whether to double up on a Burnley defense away at Leicester and/or a Sheffield United defense away at Villa. Cash Mane will be concerned about whether Cancelo starts, but with Digne and Castagne in the side, the defense is pretty strong already. This is a very solid squad all-round and it could look even better in a few weeks time if Newcastle actually emerges as a legitimate top-half team.

Useful Tip: Coman has two Burnley defenders and two Sheffield United defenders…neither clean sheet looks that promising. If you are in a similar situation, unless you are 50+ points down by the time these teams play late on the Sunday/Monday, play it safe and field just one from each if you can.

Einar vs The Incredibles 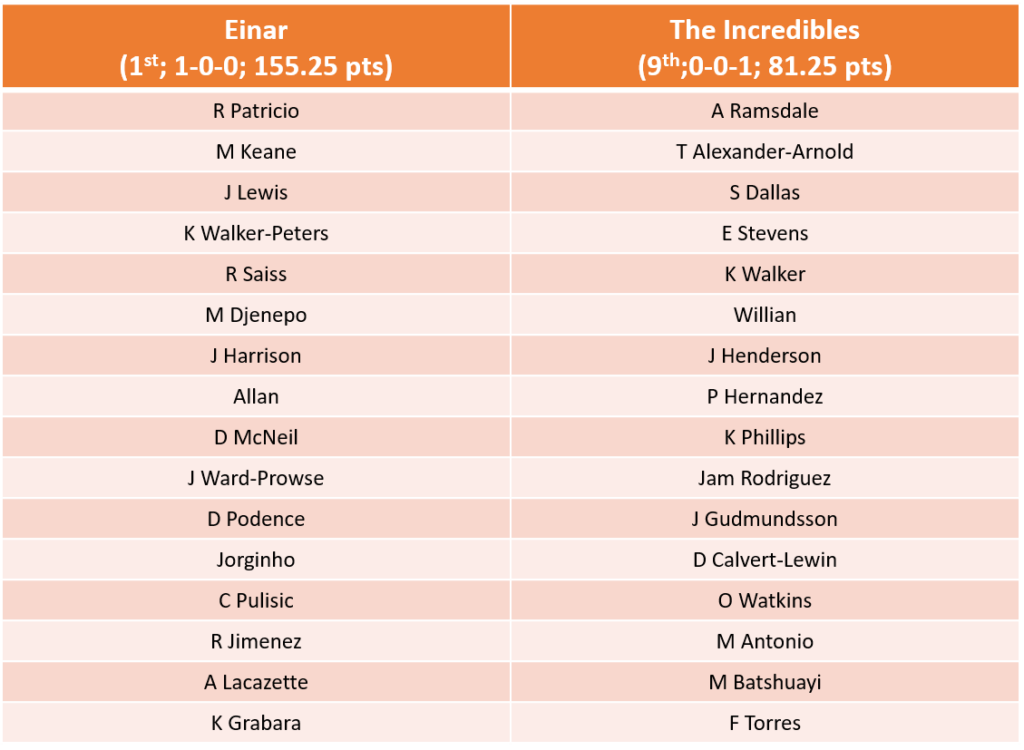 Einar’s chances in this game are about as good as Fjolnir’s chances of ever winning a match (yeah that’s right, check me out doing some research!). For those unfamiliar with the Icelandic Premier League, that means there’s little chance. It’s not that Einar has a poor team – they don’t. But when their best players (Pulisic and Jimenez) have games against Liverpool and Man City, and The Incredibles have five players facing either Fulham or West Brom, you can see the issue. The Fulham (vs Leeds) and West Brom (vs Everton) games are first up, so the one positive for Einar is that they will know the damage done pretty early. This means that squad selection dilemmas are easier to make, so if they are 85 – 15 down at 5 pm on Saturday, risks will need to be taken. For Einar – a team that somehow put up 155 points on the opening day – to have a chance of going 2-0, they will need Everton to blank and Lacazette to outscore Willian. I can’t see either happening. The W could provide a nice opportunity for The Incredibles to strengthen. Their team is okay, but outside of TAA and Willian, there isn’t a proven (reliable) Fantrax scorer here. This is the banker of the week, people.

Useful Tip: The Incredibles have a potential headache up top, with Calvert-Lewin, Watkins, Antonio, and Batshuayi. I imagine there will be similar dilemmas elsewhere, so of these four, my order for GW 2 goes: DCL > Antonio > Watkins > Batshuayi.

Chillin With My Homies vs Ezy Does It 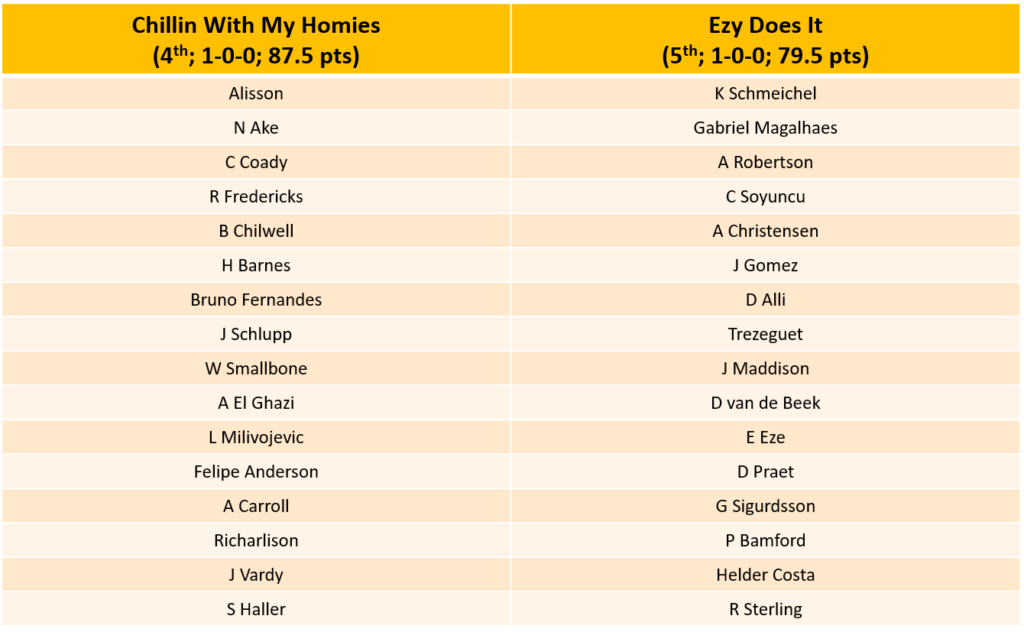 Chillin With My Homies sits at 1-0 for the season. They should savor it now because it ain’t lasting. This squad is the Fantrax equivalent of Aston Villa: one world-class player (Bruno Fernandes) surrounded by a whole load of rubbish. Actually, that’s a bit harsh – the forward line is tidy, and Chilwell and Barnes will contribute. But the rest looks like an auto-draft gone wrong. They take on Ezy Does It, whose squad is not that much better, but who have a good set of fixtures this weekend that should take them to 2-0. Whenever your weakest players – Bamford, Helder Costa, and Trezeguet – have favorable matchups you have to feel confident, and even if Sterling blanks – a real possibility away at Wolves – Ezy could find goals through this unlikely trio. Being big favorites, I expect Ezy (and Falur in the next game) to play it safe tactically: three defenders will do here – there’s no need to risk the minus points in an attempt to get clean sheets.

Useful Tip: Another good tactic to employ, if winning fairly comfortably after Saturday’s matches, is to start matching up with your opponent where possible. For example, if Ezy has a 20-point lead on Monday, and El Ghazi starts over Trezeguet, bring in a Villa player to counter – not a Sheffield United player, even if that Sheffield United player looks the slightly better option. 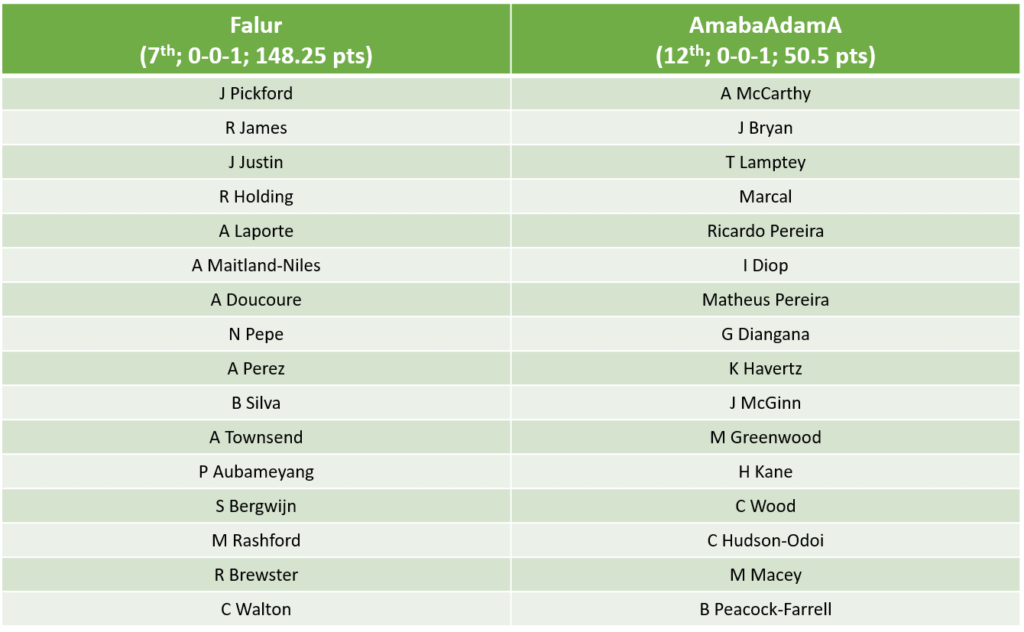 Gotta feel for Falur last week, scoring 148 but still losing. That’s the beauty of Fantrax though – one week you’re amazing but lose because you face the very best, the next you’re bad but win because you face the very worst. Coincidentally, it is the latter of these which Falur will experience this weekend. James and Justin – the pair that combined for over 50 points in gameweek 1 – will have tougher assignments this week against Liverpool and Burnley. The loss in points there could be offset by Aubameyang actually improving on the 15 points he scored. The Gunners’ captain is at home to the hammers, and a 30+ pointer is not off the cards. Everyone in Falur’s midfield is a rotation-risk, so that could make things entertaining when the lineups are announced. For AmabaAdama, things can’t get much worse than 12th place and just 50 points on opening day…or can they? This team is…interesting. For instance, the defense consists of a) Fulham, b) a youngster with 8 total career starts, c) a 31-year old new to the Premier League, d) broken, and e) West Ham. This. Is. Not. Good. And whilst we should be wary of taking too much from gameweek 1, the performances of Pereira, Diangana, and Havertz have definitely not increased their stock. This team badly needs Kane to be the 2016-17 version of himself, otherwise, it’s in serious trouble.

Useful Tip: Fielding a full 11 isn’t always the easiest thing to do – as AmabaAdama may find this week. If you’re in a league with only 3-man benches (or less), it is essential not to waste a spot. If, for example, Bryan gets dropped by Fulham in the early kick-off, is it wise to put him on the bench? I’d suggest not. Drop him – he won’t be missed that much. The flexibility this then gives you for the remainder of the game week will help BIG TIME. (Note, this gets less important as the weekend progresses). 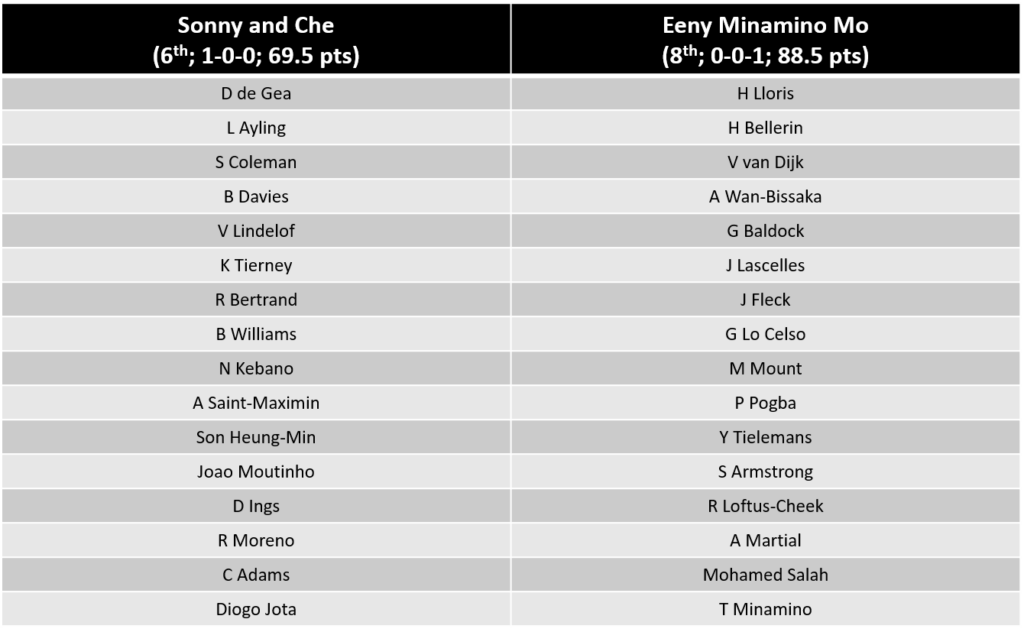 First up on ‘Match of the Day’ will be the high scoring game between Sonny and Eeny (do they have MOTD in Iceland??). The squad assembled by Sonny is unique – it seems to have taken the approach of acquiring an elite midfield with the reliable Ings up top, and then a deep defense that it can rotate depending on matchups. It’s unusual, but I like it. If Jota can return to prominence, or Moreno becomes a viable option, this could be a winning formula. Eeny’s controversial (some would say ‘foolish’) decision to trade out Aguero and Foden for Pogba and VVD shouldn’t hurt them this week – even if Aguero is back as expected – what with City’s tough matchup. In fact, the United stack of Pogba, Martial, and Wan-Bissaka could provide a big return. Unfortunately, I don’t think it will be enough. There are too many nice matchups for Sonny, and Eeny will need a couple of others – like Mount, Lo Celso, or Fleck – to step up if they are to have a chance. After losing by less than 3 points last week, this could be another painful loss. Bold prediction time: Eeny to score the second-most points this week…and still lose.

Useful Tip: I’ve never seen an approach to squad building like Sonny’s – it’s so intriguing!! I’m not sure I endorse it yet, so I’m not sure it can count as a “useful tip”, but this is definitely novel (to me at least) – I’m looking forward to seeing how it plays out!

Let Me Talk vs Klichbait 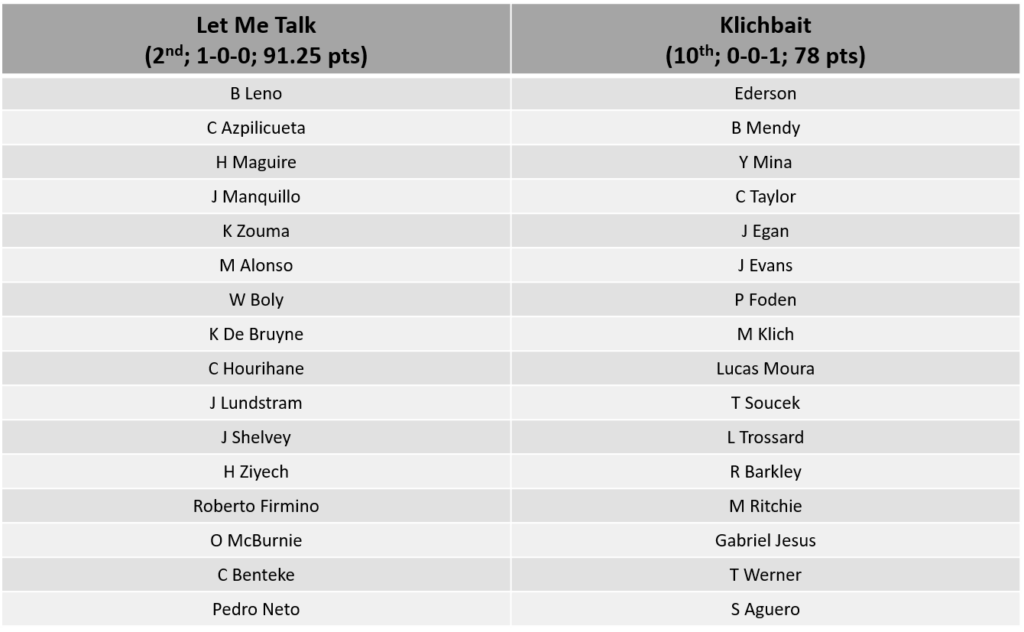 Like the United-Sancho transfer saga, this one is going right down to the wire. Ultimately though, it will be Klichbait who end as the United faithful (aka disappointed). We have a couple of decent squads here but the fixtures aren’t kind to either. Let Me Talk’s Chelsea defensive stack is particularly worrying as they host Liverpool, whilst Klichbait’s Manchester City contingent don’t have a nice opening to their season as they travel to Wolves. Perhaps fittingly, Klichbait will be very reliant on Klich to score big in what should be a nice matchup against Fulham, whilst KDB – as always – will lead the charge for Let Me Talk. The handcuff strategy is a beautiful sight (almost as beautiful as Seljalandsfoss…yep, I’m nailing that research) and we have two potential handcuff strategies in play here, with Alonso/Azpilicueta for Let Me Talk and Jesus/Aguero for Klichbait. With the league employing 5-man benches this could be lucrative for both sides in the long run. Klichbait will compete with Falur for the title of “most rotation-risk midfield”, which is probably the only title they’ll end up challenging for. I’m predicting two below-par scores here, with an unlikely hero (Manquillo or McBurnie) emerging to scrape the win for LMT.

Useful Tip: This weekend has a number of (real-life) matches that can be damaging to fantasy assets – for instance, Chelsea vs Liverpool and Manchester City vs Wolves – has the potential to kill a whole host of normally high-value options. Certain players though – ones with low reliance on GACS (goals, assists, and clean sheets) – are more immune to these matches. Again, when in a close matchup, like this one between Let Me Talk and Klichbait, the safe option may be the best option.