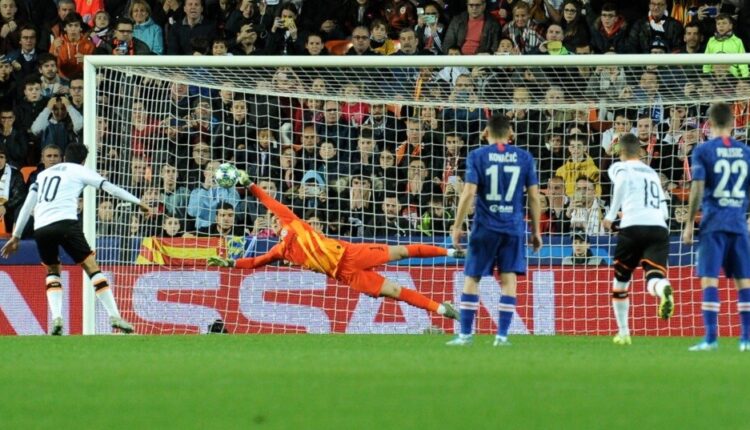 A common draft strategy voiced during pre-season was to not waste a pick on a goalkeeper. Or at least not to waste a high/moderate pick (i.e. first 10 rounds). This is something I strongly believe in. Goalkeepers for the big teams often face few shots and are therefore very reliant on clean sheets for their points, whilst goalkeepers for the small teams are, clearly, at risk of conceding a lot and therefore actually ending with negative points. Finding the happy medium is an almost impossible task and one that is most effectively achieved on a week-by-week (“streaming”) basis by looking at EPL Points Against.

EPL Points Against calculates how many points a position, in general, is averaging against a particular team. For instance, if the 13 goalkeepers that have faced Arsenal so far this season have scored 2.25 points, 0, 16.25, 8, 0, 0.25, 6, 0, 11, 4, 4, 11, and 2.5 then the EPL Points Against would be 5.02. It is essentially putting objective values to things that we already think of when making defensive decisions: “City score goals for fun…but that could also mean a lot of saves…do I go with Dubravka this week?” (spoiler: no).

But who to get? A buddy in my league, despite spending the whole summer admitting that I was right and that he would go for the streaming strategy, took Alisson in the seventh round. His explanation was that he didn’t want the hassle of having to research who to get each week. The hassle of having to dig into the numbers; looking at the opposition, past scores, trends, and many of the other things that could influence a goalkeeper’s points potential. It was a fair response. But he didn’t bank on these articles being written…

As mentioned in a previous article, rather than just giving out advice without any sort of accountability, I will instead be taking a brief looking back at my predictions each week to assess how I fared. Here is who I predicted to produce the goods in gameweeks 11 and 12, based on EPL Points Against:

The Bournemouth keeper produced the goods to bring home a very impressive points haul – and he also followed it up with 11.25 points in Gameweek 12, as predicted. He had an ownership rate of just 22% at the time (now 53%), so as free agents go, you don’t get much better. Picking up Dubravka would have been less rewarding, but 4.25 points shouldn’t cost you a matchup. Remember, in most cases, streaming should be used to keep you ticking over, as opposed to single-handedly winning you a game – that’s for the draft picks to do!

A much poorer performance in Gameweek 12, with both predictions proving to be bad choices. Krul was always going to be a risky one, but to see Norwich no-show like that in a big game was surprising – even more so when you consider both Norwich and Watford’s results in the subsequent Gameweek 13. Similarly, anyone who backed Gunn may count themselves unfortunate that Southampton was on the receiving end of a rare good performance from Everton. 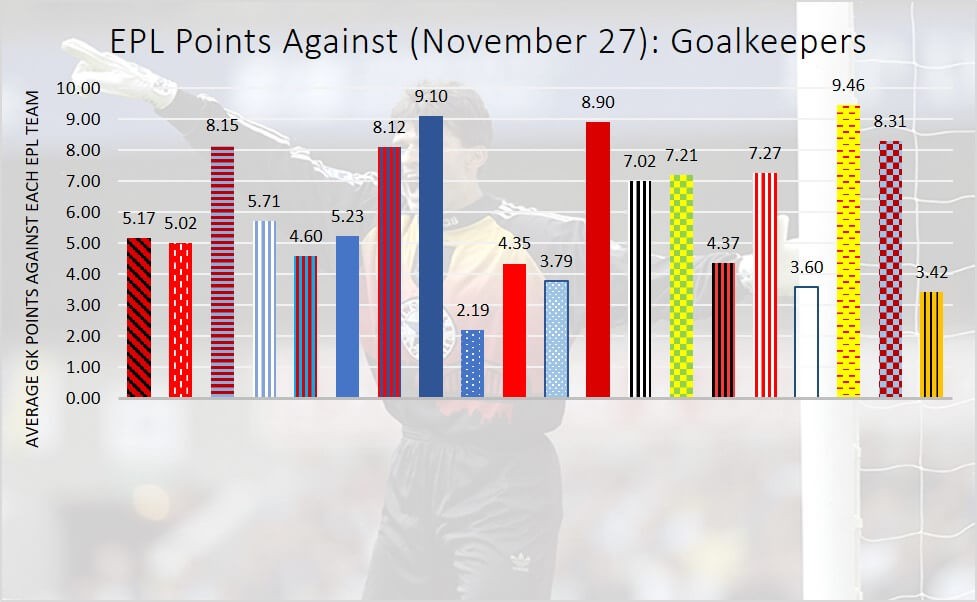 Watford remains the team to face from a goalkeeper perspective, though five teams – most notably Everton – are doing their best to catch up. After that, Newcastle, Norwich, and Southampton make up a small cluster of still viable options, as their EPL Points Against all sit comfortably above average (6.05). Goalkeepers facing the remaining 11 should be avoided where possible, but particularly those squaring off against Leicester, Wolves, Tottenham, and Manchester City. Finally, there are four teams who have sizeable home-away splits in EPL Points Against. Goalkeepers playing Manchester United, Norwich, Wolves, and West Ham all fare considerably better when they are at home…so be sure to take that into consideration too.

(Note, targets will only include goalkeepers owned in less than 75% of leagues. This removes Alisson, Ederson, Schmeichel, de Gea, Leno, and Pope from selection).

Chelsea and West Ham face off in Gameweek 14 – two teams very much trending in the opposite direction. West Ham was very poor against Tottenham last time out, and though they scored two goals, they had an xg of just 0.66. Now they go to the bridge. Six goalkeepers have faced West Ham at home, and four of them have scored double-digit points. Surely Kepa improves on his FP/G this weekend (it wouldn’t be hard!). (Note, Kepa is a solid option in Gameweeks 15 and 16 too, but to provide some variation I will offer different options below).

The difference in goalkeeper scores at home and away has shrunk considerably over the last three weeks, though I am still usually reluctant to back one on the road. Nevertheless, after Kepa, there aren’t many great options available. Keepers have averaged 6.29 points away at Southampton this season, and though Watford was dismantled by Burnley last time out, they were on an upward trajectory before that.

McCarthy is a tempting option for Gameweeks 14 and 16, but it is the home time against Norwich in Gameweek 15 that is the best time to pick him up, at least if EPL Points Against is anything to go by. The seven goalkeepers to have faced Pukki and Co at home have scored 14.75, 14, 12.5, 10, 8.25, 6, and 2, for an average of 9.64. Do we back Norwich to win back-to-back road games? If not, then the Southampton man should probably be taken.

See Kepa blurb. Additionally, Wolves have been improving big time since their slow start to the season. Their xga for the first 9 games of the season was 1.39, whereas, for the last 4 games, it was 0.74 – much more like the Nuno side that surprised us all last season. A tough couple of games coming up for the Hammers – and ones that you should be able to exploit for your Fantrax fantasy team.

Making predictions three games in advance is destined for trouble…and backing Guaita away at a Watford team that will likely have a fully fit Troy Deeney raring to go might not be a good idea. But we will stick with what the EPL Points Against suggests. Facing Watford at Vicarage Road has actually been more lucrative for goalkeepers than when they are at home, with Rui Patricio, Ederson, and Pickford all scoring big. Palace’s defensive record is actually very good if you exclude games against the “big six” + Leicester (3 conceded in 6 games).

Newcastle takes on Southampton in Gameweek 16, and you could do far worse than take a punt on Dubravka in goal. This should be a low scoring game, with only Watford scoring fewer than Newcastle, and Southampton hardly much better. The Saints have an EPL Points Against of 7.27, but this rises to 8.11 when being faced at home. Steve Bruce’s team has been good defensively at home too, conceding just four goals in six games (at the time of writing anyway).

So that’s it for gameweeks 14 to 16. The EPL Points Against suggest that Kepa, and perhaps even McCarthy, should score nicely for the next three weeks. Rui Patricio, Foster, Guaita, and Dubravka also have nice matchups during this period. Remember, next week we go back to the underlying numbers and check out which players are reliant on the main three (goals, assists, and clean sheets), and which ones rack up the ghost points.