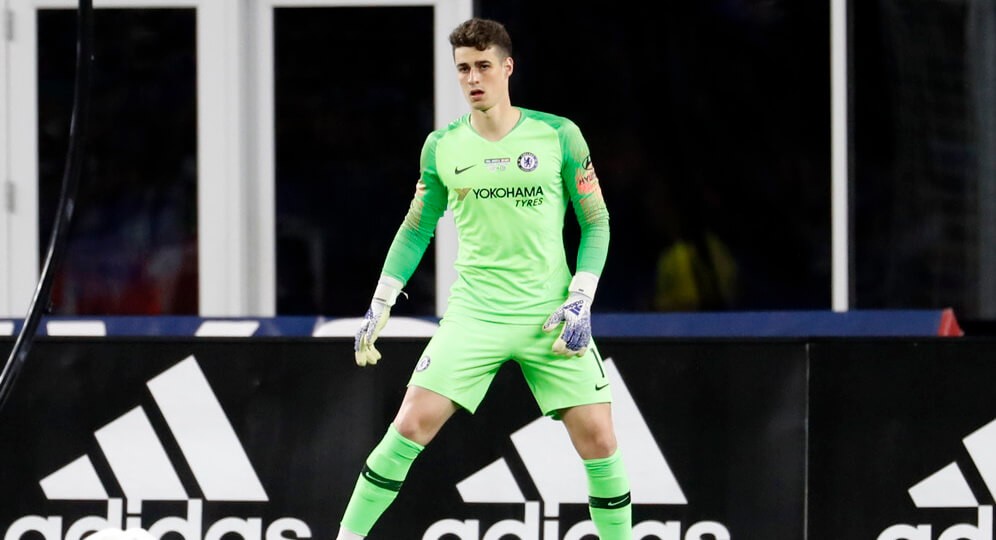 A common draft strategy voiced during pre-season was to not waste a pick on a goalkeeper. Or at least not to waste a high/moderate pick (i.e. first ten rounds). This is something I strongly believe in. Goalkeepers for the big teams are very reliant on clean sheets for their points (Ederson is still facing just six shots per game so far), whilst goalkeepers for the small teams are, clearly, at risk of conceding a lot and therefore actually ending with negative points. Finding the happy medium is an almost impossible task, and one that is most effectively achieved on a week-by-week (“streaming”) basis by looking at EPL Points Against.

EPL Points Against calculates how many points a position, in general, is averaging against a particular team. For instance, if the six goalkeepers that have faced Arsenal so far this season have scored 2.25 points, 0, 16.25, 8, 0, and 0.25 then the EPL Points Against would be 4.46. It is essentially putting objective values to things that we already think of when making defensive decisions: “Should I bench Digne this week, given that City have just banged in eight?”, or “Newcastle look pathetic going forward…have Soyuncu or Evans already been snapped up?” If you adopt a streaming strategy, then these numbers can be vital.

But who to get? A buddy in my league, despite spending the whole summer admitting that I was right and that he would go for the streaming strategy, took Alisson in the 7th round. His explanation was that he didn’t want the hassle of having to research who to get each week. The hassle of having to dig into the numbers; looking at the opposition, past scores, trends, and many of the other things that could influence a goalkeeper’s points potential. It was a fair response. But he didn’t bank on these articles being written.

Every other week I will take on that hassle for you, and – hopefully – identify the best streaming options for goalkeepers and defenders. Yep, defenders should be streamed too! You have to start at least three defenders, and one or two of them may well be high draft picks. But the draftable defender list does not go three circuits deep. And so that third defender should again be a week-by-week selection based on the EPL Points Against, allowing you to have hopefully stacked up on midfielders and forwards – where the big points are generally earned. Don’t worry if you didn’t adopt this strategy in your draft though – you can still trade your way into this position. If you do, then follow these articles and I will help you stream your way to success.

As mentioned in a previous article, rather than just giving out advice without any sort of accountability, I will be instead, taking a brief looking back at my predictions each week to assess how I fared. Here is who I predicted to produce the goods in gameweeks 5 and 6, based on EPL Points Against:

Heaton (10 points home to West Ham United; 0.25 points away at Arsenal). Goalkeepers are averaging 5.73 points per game so far this season, and Heaton matches this, but owners will obviously be disappointed with the game against Arsenal. Games against big-six opposition are always a risk, but at least it wasn’t negative points. 22 keepers have managed to do that this year and a visit to the Emirates could easily have gone that way too.

Patricio (-8 points home to Chelsea; 7 points away at Crystal Palace). Oh boy. A prediction hasn’t been this wrong since Dietmar Hamann tipped eventual champions Leicester City for relegation in the summer of 2015. The data had said that Chelsea was the third-worst at converting shots into goals…then they went and scored five of the six that they had on target. They now have the 10th best conversion rate. That’s early-season small sample sizes for you.

Burn (5.75 points home to Burnley; 12.5 points away at Newcastle United). The average defender’s FP/G is 6.35, but if we restrict that to players owned in less than 50% of leagues (and who have still started in at least 3 games), that number falls to 4.99 FP/G. Which makes the first of Burn’s scores decent, and the second very good indeed.

Vertonghen (12 points home to Crystal Palace; 0.5 points away at Leicester City). Similar story as with Heaton above. An excellent first innings score followed up by a poor second innings tally – but as expected given the matchups.

Aurier (33.75 points home to Crystal Palace; 4.75 points away at Leicester City). This was sooo close to being two monsters scores for the right-back, but alas, VAR cost the Tottenham man a boatload of points. As bad as the Patricio prediction at home to Chelsea was, the Aurier call at home to Palace more than makes up for it.

Patricio aside, it wasn’t too bad a return on your investments in Gameweeks 5 and 6 overall. Still lots of room for improvement though, and that is what we will expect as the season goes on and the data that these articles are based upon increases.

EPL Points Against, Gameweek 7: The Goalkeepers 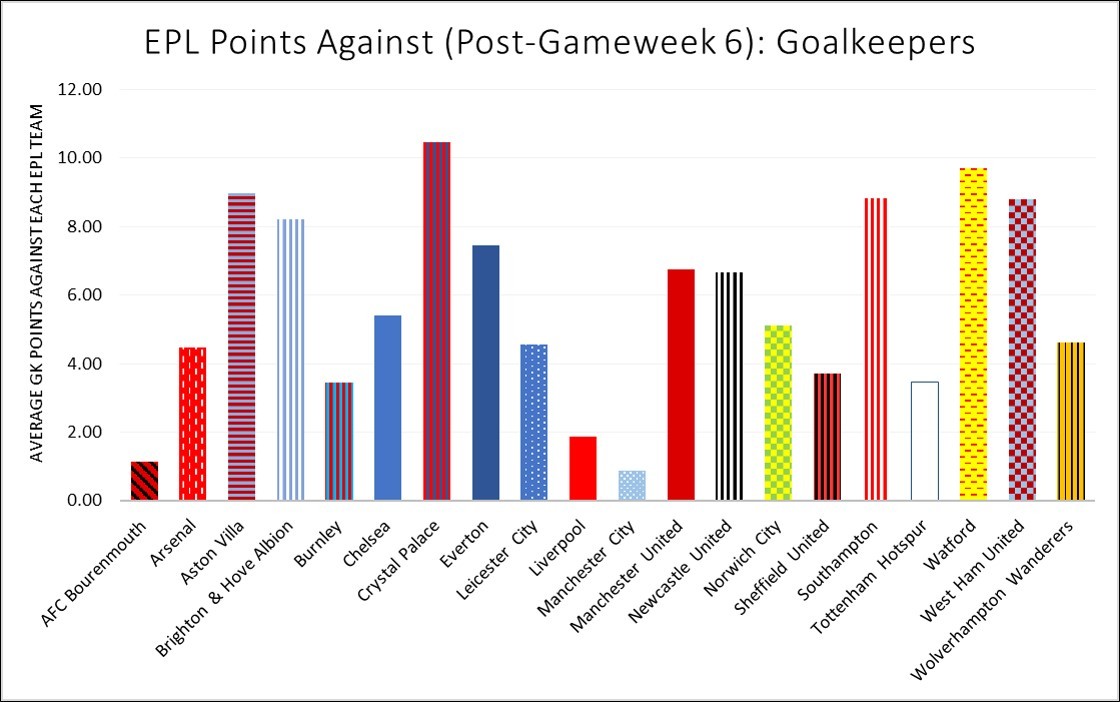 Liverpool and City continue to cause nightmares for owners of the goalkeepers they face, with EPL Points Against scores of 1.88 and 0.88, respectively. No keeper has scored more than 5.25 against Liverpool so far this season, whilst four of the six keepers to have faced City have ended up with negative points. Not good. Bournemouth’s clinical display away at Southampton (3 shots on target; 3 goals) gives them an EPL Points Against score of just 1.13 and should also be avoided if possible. Their current conversion rate of 28.9% is highest in the league. The teams facing those three in Gameweeks 7 and 8 are Sheffield United, Leicester City, Everton, Wolverhampton Wanderers, West Ham United, and Arsenal.

So if those are the ones to avoid, who are the ones to target? As I’ve said numerous times (and will continue to do so for another couple of months yet!), this data is based on a VERY small sample size. As the season progresses, my confidence in the EPL Points Against data will grow, but for now, the numbers will merely shape things, and it will be my eyes that narrow it down to a name or two.

There are four goalkeepers who have very nice looking matchups over the next two weeks, according to the data above. Two of these are very highly owned (Nick Pope, 85%, and Hugo Lloris, 97%), but there’s a chance the third is available, and it is very likely – with good reason! – that the fourth will be available.

The Kepa owner in my league finally had enough this week, and I’m not surprised. A negative FP/G?! That’s unheard of, and yet he’s still owned in 66% of leagues! Clearly those keeping the faith have already seen this data, and have eyed up Chelsea’s next two fixtures of Brighton and Southampton. The Seagulls have been giving up 8.21 points to goalkeepers so far this season, whilst the Saints have an even higher EPL Points Against of 8.83. Chelsea’s defense may have conceded the third most goals this season, but their xGA is actually ninth-best, and they looked more than fine against the vaunted Liverpool attack on Sunday. Check to see if the most expensive goalkeeper to ever walk the planet is available on a free because in a third of all leagues he will be.

So after recommending the goalkeeper who’s conceded the third most goals this season, the next logical step is to recommend the goalkeeper who’s conceded the second-most goals. And unlike Chelsea, Norwich’s xGA is almost deserving of that record, being third worst in the league. But if Kepa is taken, there might not be many better choices for the next two weeks, as Norwich travel to Crystal Palace and then face Aston Villa at home. Only one goalkeeper (David de Gea) has scored below average when facing Palace this season, whilst three out of the six goalkeepers to have faced Aston Villa so far have scored 12 or more points.

EPL Points Against Gameweek 7: The Defence 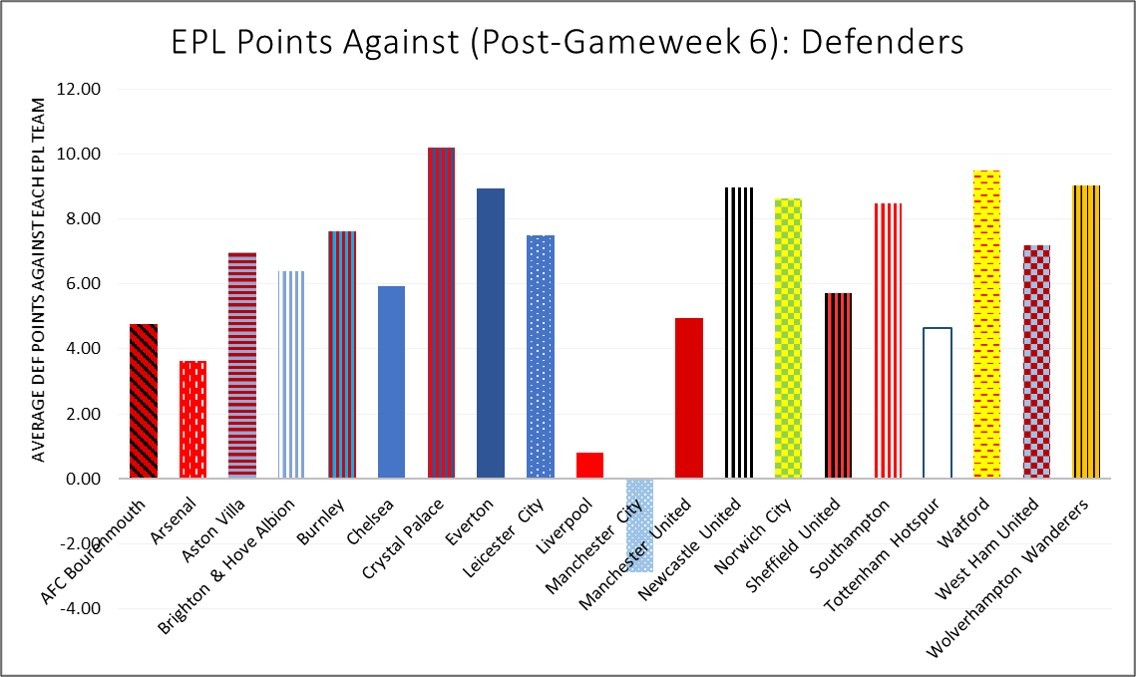 The best-looking matchups over the next two weeks, according to EPL Points Against, belong to Manchester City, who face Everton away and then Wolverhampton Wanderers at home. Unfortunately, all of their healthy players are highly owned, with Cancelo (69%) the lowest (unless you include Angelino at 3%, but I can’t see him starting any time soon). Outside of City, Burnley probably has the next best immediate schedule, though Tarkowski (91%), Pieters (80%), and Mee (63%) are all highly owned, whilst I’ve already written about how Lowton is one to target last week. All of which makes this week’s defensive targets a little tricky. Nevertheless…

Guilbert seems to have cemented his place as first-choice right-back for Villa, and could prove a very useful pickup – if Villa can stay tight at the back. It’s a big “if”, but the numbers are favorable for Gameweek 7. Villa seems to be a much better team at home (xGA of 3.42; 10th best in the league) whilst Burnley is yet to win away and have an xG of just 2.96 on the road (13th best in the league). The tougher matchup should be away at Norwich in Gameweek 8. The Canaries are scoring goals for fun at home, so the hope for Guilbert will be that he can exploit the vulnerabilities in a shaky Norwich defense and pick up some attacking points.

Evans is the lowest owned Leicester defender at 51%, but he should be owned in every league for Gameweek 7. The foxes face Newcastle United at home and Newcastle are abysmal; the worst team I’ve watched this season. They have the lowest xG in the league, have scored just four goals, and have an EPL Points Against score for defenders of 8.96. Leicester go to Anfield in Gameweek 8 though, so make sure you replace Evans with…

Take your pick, they are all probably available. Sheffield United travel to Watford in Gameweek 8, and whilst it’s been the Hornets defenders that have bore the brunt of criticism after last weekend’s 8-0 hammering, their attack hasn’t been much better. They have blanked three times in six games, and whilst the average defender score is 6.35 points, this rises to a massive 13.13 if a clean sheet is kept. For accountability’s sake, I’ll go with 44% owned Lundstram, but all are decent options given that the Watford’s EPL Points Against for defenders is 9.47 (second highest in the league).

So that’s it for Gameweeks 7 and 8. The EPL Points Against – at least in these very early days of the season!! – point to Kepa, Krul, Guilbert, and an Evans/Sheffield United rotation. I’ll be back in two weeks to assess how these four did, as well as to provide another four that the numbers suggest should perform well in Gameweeks 9 and 10. Remember, next week we go back to the underlying numbers and check out which players are reliant on the main three (goals, assists, and clean sheets), and which ones rack up the ghost points.