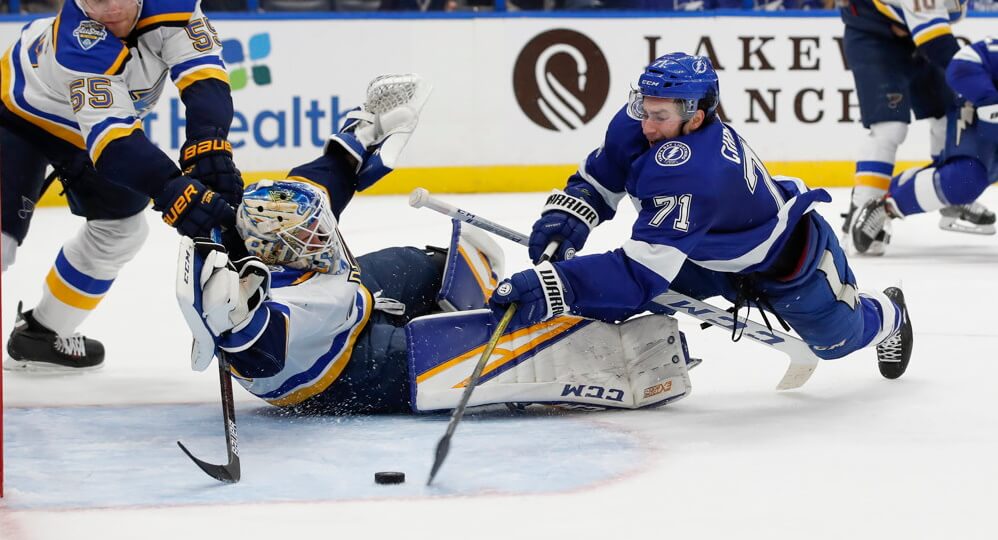 Hopefully, our American audience enjoyed a nice Thanksgiving. Meanwhile, everyone was likely disappointed by the lack of hockey, when there are usually a handful of games every Thursday. Fear not though, we have an unusually busy Friday, followed up with more action on Saturday. Maybe you need a player or two to finish off the week, and to plan for the following days. Thankfully we have the fantasy hockey waiver wire report!

LW Blake Coleman, NJD (33% owned): Who would you guess has the most goals on the Devils? Taylor Hall? No, it’s Blake Coleman (and Kyle Palmieri) with nine markers. Coleman is also tied for third on his team in overall points with 14. He’s coming off a four-point performance from Thursday night and boasts 10 points in his past eight appearances. Plus he throws his body around, piling up 70 hits on the season.

C Anthony Cirelli, TBL (46%): The 22-year-old has caught fire lately. He has a six-game point streak going, where he has five goals and four assists. He’s playing on the Lightning’s second line, where the team as a whole is trending in the right direction. Cirelli is up to 16 points in 21 contests and is proving once again how good Tampa Bay is at drafting and developing quality talent.

LW Ondrej Palat, TBL (46%): The Czech winger has been elevated to the top line in Steven Stamkos’ absence. Palat is making the most of the opportunity, posting six points in his last seven games. On top of the points, he’s dished out 23 hits over that span. He’s up to 15 points in 22 contests. While we may not see him reach 63 points again as he did back in 2014-15, it’s looking like he’ll easily surpass the 34 and 35 point totals he posted in his two most recent campaigns.

RW Oliver Bjorkstrand, CBJ (34%): Bjorkstrand has been on a roll, racking up eight points in his last five appearances. The 24-year-old is playing on the Blue Jackets third line, but also on their top power-play unit. This is a player that scored 23 goals and 36 points last year, after a 40-point campaign in 2017-18. We’ve seen flashes of brilliance from him over those years, but lately, he’s showing he has another gear to his game.

RW Brandon Tanev, PIT (32%): Tanev is easily on pace for a career year. He has 13 points through 25 outings, with six of those points generated in the past six games. That puts him on pace for 42 points — 13 more than his previous best. What makes him even more appealing are his whopping 99 hits. That’s the third-highest amount in the NHL. Side note: his brother Chris Tanev is third in the NHL for blocks with 68. Perhaps the Tanevs can push each other to stay near the top at each category?

D Zdeno Chara, BOS (39%): I held off putting Chara in last week’s waiver wire list, thinking that he may be cooling down. The exact opposite ended up happening. The 42-year-old continues to surprise, as he’s now riding a four-game point streak. He’s already up to 12 points on the year, after registering just 14 all of last season. Instead of wearing him down, it seems that last year’s cup run has only motivated him further.

D John Marino, PIT (20%): The rookie defender has a six-game point streak going, where he’s compiled a goal and six apples. Even with Kris Letang back in the lineup, Marino is still seeing over 20 minutes a game every night. He’s up to 11 points in 23 contests and could have some sneaky upside.

G Juuse Saros, NSH (46%): After a slow start, Saros is 2-0-1 in his last three games, defeating the defending champions in back-to-back contests. Saros has found his way into each of the Predators’ last six games. This is due to Pekka Rinne’s struggles. Rinne’s last win came all the way back on Nov. 4. His save percentages since then have been: .773, .840, .714, .706. We’ve been hearing that Saros was to take over the Nashville crease for years. Has his time finally come?

G Tristan Jarry, PIT (25%): Starter Matt Murray has had a forgettable month. He hasn’t won a game since Nov. 9. This has allowed Jarry to see more ice time than he’s used to. Jarry is 4-0-0 in his last four appearances, surrendering just six goals in the process. (Note that one of those games he only played 20:59 after Murray got the hook). Until Murray re-discovers his game, Jarry figures to play more often. Especially if he continues getting results.

Also, check out last week’s waiver wire picks to see if any of those players are still available.