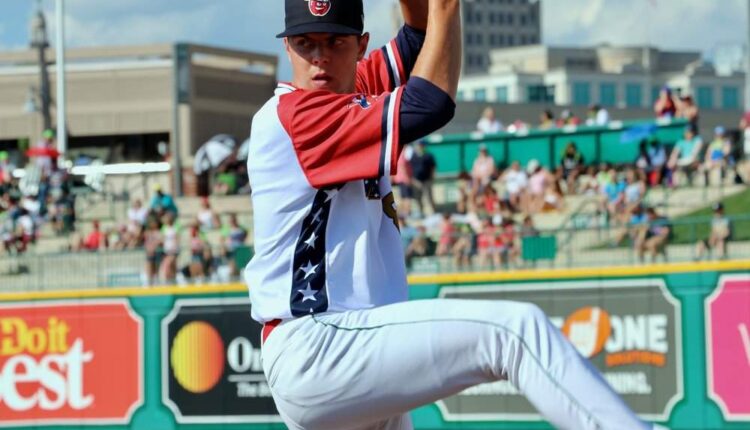 So far this offseason, I have written two articles for Fantrax analyzing former prospects with small sample sizes. Prospects are some of the most enticing players during draft season. They put up video game numbers in the minor leagues and instantly fly up draft boards. While hitters tend to struggle, the adjustment period is often even longer for pitchers. Not only do pitchers have to adjust to the skill level of big-league hitters, but they also have their innings monitored and limited by their organization. This leads to confusion on draft day, as former pitching prospects are sometimes the most difficult to decipher. In this article I look at three former pitching prospects with small big-league sample sizes and analyze their draft value for 2023!

What Stats are Important?

In my previous two articles, I looked at which statistics can stick out when evaluating hitting prospects. Now, it is time to figure out which stats are more important with pitchers. Similarly to hitters, strikeouts and walks are two of the fastest statistics to stabilize. Strikeout rate stabilizes the fastest at about 20IP while walk rate stabilizes around 45 IP. Launch angle is another telling statistic about a pitcher. In about 25IP, you can paint a pretty accurate picture of whether a pitcher is a ground ball or fly ball pitcher. Exit velocity takes a little bit longer but starts to stabilize around 75IP. If you want to read about more of the statistics and their stabilization rates for pitchers you can check out that article here!

The first pitcher to dive into has a little bit of a larger sample size. Cabrera only threw about 71 innings in 2022 but also threw 26 innings back in 2021. Cabrera always put up enticing strikeout numbers throughout his minor league career. He features one of the filthiest changeups in baseball. This pitch posted a run value of -10 in just 397 pitches. This ranks as the 7th best changeup in all of baseball. Despite this, Cabrera failed to post a double-digit K/9 in his small sample size. In 2021, Cabrera’s strikeout rate was 23.3% and in 2022 it was 25.8%. Both numbers are respectable but seem a little low compared to what we would expect from a pitcher with Cabrera’s arsenal.

The one thing holding Cabrera back is his fastball. He has 85th percentile velocity and 61st percentile spin on the pitch. So, what is the problem? While opposing batters chased the changeup over 43% of the time, they chased the fastball just 12.7%. Even more important, batters are not swinging at Cabrera’s fastball. As you can see in the image below, batters are swinging at all three of his other pitches significantly more than his fastball. Hitters are picking up Cabrera’s fastball and laying off.

This is problematic for Cabrera because he struggles with his control at times. Cabrera’s 41.7% zone rate was well below league average. Amongst pitchers with at least 50 innings, this ranks 24th worst in baseball. Cabrera is going to continue to struggle unless he can harness his stuff. His BB/9 in 2022 was 4.14 which needs improvement.

Although Cabrera struggles with his command and does not post as many strikeouts as you might expect, he clearly baffles major league hitters with his stuff. In his small sample size, the former top prospect has demonstrated an excellent ability to limit hard contact. He is more of a fly-ball pitcher than ground-ball pitcher but needs to work on his control if he wants to limit the home runs.

At the end of the day, I am skeptical of Cabrera’s 2023 value. He has electric stuff, but I am not sure he will ever possess the strikeout upside people might think. He struggles to locate pitchers with regularity and hitters have realized they are just better off not swinging. His early ADP is about 214 which is not terrible I just think I like some of the other pitchers going around him a little bit more. Cabrera has always struggled to lower his walk rate and I am not sure this will ever change.

Contreras made his MLB debut late in the 2021 season but was really given his first chance in 2022. The former Yankee prospect who was dealt to Pittsburgh as part of the Jameson Tailon trade pitched 95 innings for Pittsburgh. The results were encouraging as Contreras posted a 3.79 ERA. He looked to be the best pitcher in the Pirates rotation. The only reason he only threw 95 innings is that Pittsburgh put an innings restriction on their young arm. With 2023 around the corner, Contreras is expected to be an important part of Pittsburgh’s season. Should fantasy managers expect a breakout for Contreras? Time to dig deep and find out!

Contreras is essentially a three-pitch pitcher. He relies primarily on his fastball, slider, and curveball. All three pitches have above-average movement, spin, and velocity. Contreras possesses some of the nastiest stuff in the game. In theory, this should lead to a high strikeout rate. However, in reality, Contreras only posted an 8.15 K/9. Since this stat begins stabilization at around 20IP, Contreras’ strikeout rate should be fairly stabilized at 95IP. This leads to two questions.

Against righties, Contreras effectively located his slider down and away which is the perfect location. 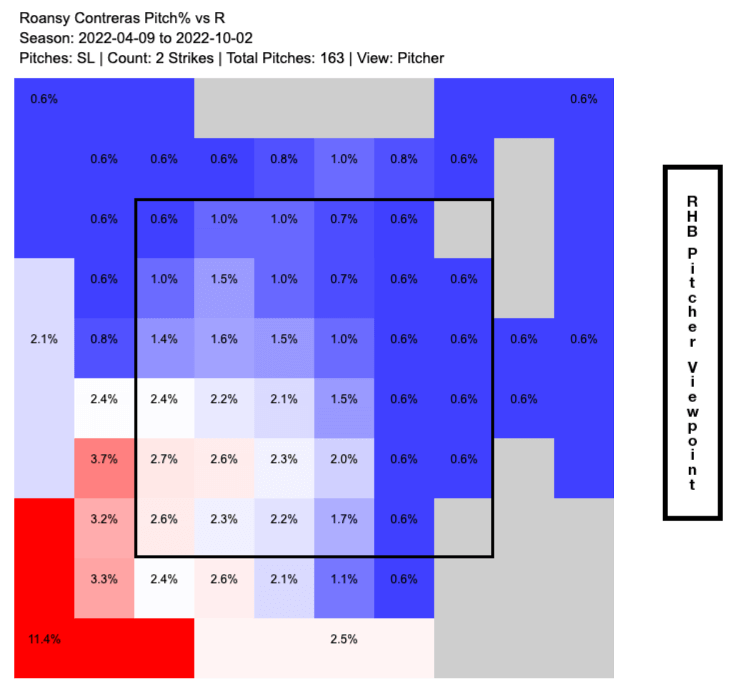 Too often against lefties, Contreras left his curveball hanging which is something he will need to work on. 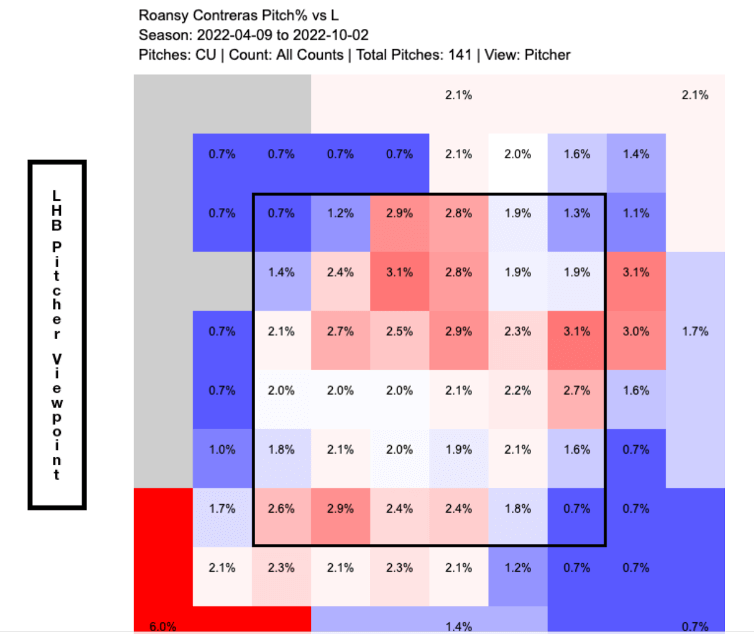 Can the former Pirates’ prospect fix this issue? I think he absolutely can. He already has one elite out pitch in his slider and his curveball has great spin and movement on it. Contreras posted a 61st-percentile whiff rate and an 81st-percentile chase rate in 2022. I expect his strikeout rate to improve in 2023. His stuff is too good for it not to.

One area Contreras might find himself getting into trouble is the long ball. He is a fly-ball pitcher and struggled to limit hard contact in 2022. I expect him to continue to improve with his location which will help but do not be surprised if Contreras runs a high HR/9. Contreras is currently going around pick 290 in drafts. I think his upside makes him well worth the selection here. The stuff is too good for Contreras to not improve and if the curveball takes a step forward, so will he!

Remember that minor transaction in the middle of last season that sent some outfielder named Juan Soto to the Padres? Well, another piece of that trade was MacKenzie Gore. The former top prospect has had a tumultuous career so far. Across Gore’s first nine appearances in the 2022 season, he posted a 1.50 ERA with 2.20 FIP and a K/9 above 10.6. Things went very downhill for Gore after that. Across his final 22 innings, Gore posted an ERA above 11.00 and saw his K/9 drop to 6.14. After that Gore was shut down due to injury and then traded to Washington. Now fantasy baseball players face the difficult task of evaluating who the real MacKenzie Gore is.

Gore has a four-pitch repertoire with his fastball being his best pitch. Gore has above-average velocity on this pitch and thanks to his 92nd-percentile extension, the pitch appears even faster than it is. During the 2022 season, this was Gore’s most-used pitch by a wide margin. He threw his four-seamer over 60% of the time without throwing a breaking pitch more than 19%. Even with two strikes, Gore relied heavily on the fastball, especially against righties. Gore did ramp up his slider usage against lefties with two strikes. The interesting part is that Gore particularly struggled to strike out left-handed batters. His K:BB ratio was 2.4 against righties and just 1.2 against lefties.

Digging deeper, Gore is essentially a two-pitch pitcher when it comes to attacking lefties with two strikes. He relies only on his fastball and slider. The curveball is completely ineffective against lefties as Gore failed to get a single chase on the pitch with two strikes. The issue with this is that the curveball is Gore’s best out pitch. This pitch generated a 48% two strike chase rate with a 35.7% whiff rate against righties. With left-handed hitters able to eliminate the curveball, MacKenzie Gore is forced to rely on his slider which he does not have consistent feel for. Gore only generated a whiff rate of about 28% on his slider with two strikes against lefties. As you can see by the heat map, he was leaving the pitch middle in the strike zone to lefties which allows them to fight the pitch off. 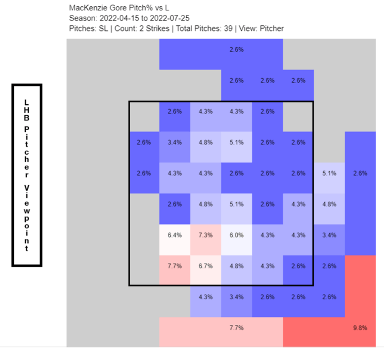 Now reference MacKenzie’s heat map compared to Blake Snell’s heat map. Both pitchers rely heavily on the slider to get lefties out, but Snell does a better job of locating the pitch. 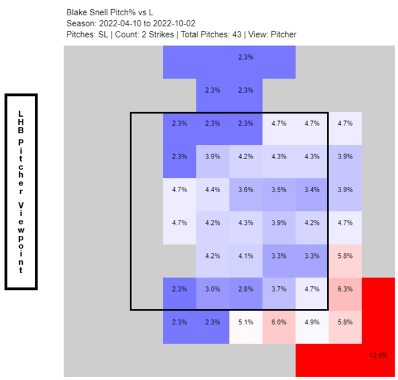 Okay, so what is the point? Gore has the fastball and breaking pitches to get batters out, he just must locate his slider. I would be more concerned if he was struggling to get right-handed batters out, but it is the opposite. Gore’s walk rate concerns me but due to his prospect pedigree, I am confident in his ability to make the necessary adjustments to his slider. This should help his K/9 look closer to his start in 2022 rather than his finish.

During his brief 2022 season, MacKenzie Gore struggled to limit hard contact. He ranked in the 4th percentile in average exit velocity and in the 6th percentile in hard-hit percentage. This boils down to the control issue that led to Gore’s high walk rate. He has been unable to control his pitches consistently leading to both mistakes over the plate and pitches way out of the zone.

Early ADP shows Gore is going outside of the top 400 picks in most drafts. At that spot, Gore’s stuff and early 2022 success make him an intriguing option. I do expect the K/9 to rebound as he learns to control his slider and strike lefties out. He is currently going behind pitchers like Kenta Maeda, David Peterson, and Sean Manaea. I believe that Gore has more upside than all of them and is a refined slider away from taking the next step. His fastball is above average, and the curveball is effective in striking right-handed batters out. The only thing missing is his slider to combat lefties which I believe Gore will improve in 2023!