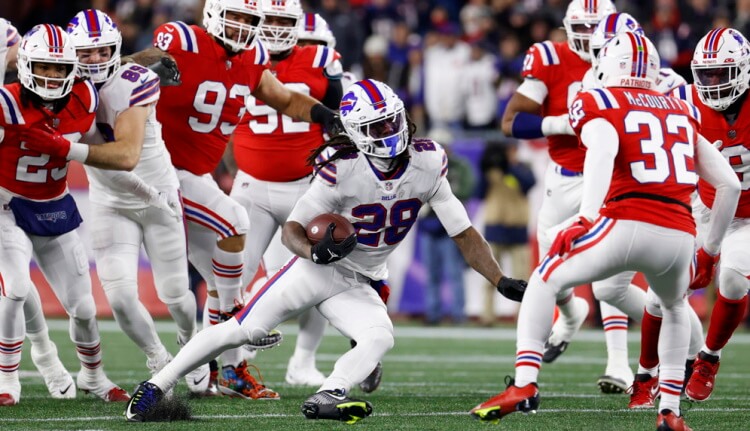 A whole 12 weeks of football are in the bag and we have plenty of the data needed to make informed decisions. It’s virtually impossible to watch every second of every game, so naturally, there are things that you miss from week to week. This article aims to name mostly under-the-radar, mid-tier, but fantasy-relevant players that are trending up or trending down. You’ll never see me mention that Justin Jefferson is trending up because that’s a headline you can read just about anywhere. You’ll also never see me slap a player like Matt Breida with a “trending down” label, because (with all due respect) who cares? But you will see me hold “star” players to a higher standard by occasionally featuring them in the trending down category. The underlying purpose of this article is to identify rising players before they become popular waiver wire adds.

It was only a matter of time before James Cook began to heat up. He’d been trending in the right direction for a couple of weeks now. However, his usage on Thursday night was at an all-time high. There were moments that left me wondering if there was something wrong with Devin Singletary health-wise. A fourth-quarter goal-line score remedied that thought immediately. Regardless of the score, it was clear that Cook had the better day overall. In addition to his season-high 14 carries, he was also involved in the passing game. Josh Allen looked his way six times and Cook caught them all. Cook managed 41 receiving yards, often making at least one defender miss in open space. We probably need another game or two, but it appears that this split will be the new dynamic in the Buffalo backfield. If James Cook is available in your league (12 teams+), I would recommend adding him as a depth option for a playoff run.

Kyren Williams is perhaps the lone bright spot on this new-look Rams offense and even he really hasn’t even done much. Williams has been active since Week 10 and has yet to top 40 rushing yards. I know what you’re thinking, “Hey Reese, the trending down section is down there.” Yes, while Williams hasn’t done much, he’s at least been looked at in the passing game. He went 3 for 30 in his first game and three for 25 his last time out. In addition to the targets, Williams has been neck in neck with Akers as far as carries go. Akers’ involvement in the passing game is non-existent. It is hard to put too much stock in the lack of production from Williams due to the shaky (God awful) quarterback play. Matthew Stafford wasn’t exactly lighting it up before his injury, but there’s no doubt that Williams’ better days will come with Stafford under center. Matthew cleared the concussion protocol yesterday, however, head coach Sean McVay has already ruled him out. This move coincides with the fact that the team believes that Stafford’s “head” injury is actually a neck ailment. Please don’t go adding Kyren Williams, not even in the deepest of season-long leagues. However, Williams is a very interesting hold in all dynasty formats. Running back is a need for the Rams. If the team doesn’t address that need in free agency or the draft then Williams could be gold.

The Colts haven’t had a tight end worth mentioning in fantasy since Dwayne Allen. Don’t talk to me about Jack Doyle and hush all that Coby Fleener talk. Seemingly out of nowhere, Jelani Woods produced a fine fantasy day his last time out. After missing the two previous games with a shoulder/quad injury, Woods was the focal point in the passing game for the Colts. Mo Alie-Cox’s inactive status allowed Woods to see his largest snap count (64%) of the season. With Matt Ryan back under center, Woods pulled in eight of nine targets for 98 yards. The Colts are struggling to collect wins this season, so it must be nice for them to see one of their rookies trending up. It would make sense for the Colts to keep rolling Woods out there in volume. It is too early to add Woods in season-long, as this is his first time showing this sort of upside in the NFL. He should be blipping on your dynasty radars though.

Woods needs to be more involved in the offense, it’s as simple as that. #ForTheShoe pic.twitter.com/USNUhUBiiy

What a roller coaster ride 2022 has been for James Robinson. He began the season in Jacksonville the 2B to Travis Etienne. The two seemed to mesh together very well, but the Jets have other plans. With Robinson performing admirably, his trade value was too much for the organization to ignore. Robinson was then dealt to New York for a conditional sixth-round draft pick that can turn into a fifth-round pick. Shockingly, Robinson was a healthy scratch for last week’s game. His inactive status is more than enough to slap a “trending down” label on him. Obviously, Robinson was unhappy with his gameday status and says that he has “been working his a– off” and is “pissed off”. It doesn’t help that rookie running back Zonovan Knight totaled 103 yards in his debut, rushing for 64 yards and catching three passes for 34 yards. Head coach Robert Saleh claims that we “haven’t seen the last of James Robinson”. I wouldn’t be surprised to see him playing for another team come next season.

#Jets RB coach Taylor Embree said he talked to James Robinson about his frustration and explained it will always be by committee in this system and “week by week”.

Embree: “I told him I’d be mad if you weren’t mad you weren’t playing. We want guys who want to play.”

Through no fault of his own, Tyler Higbee has fallen from relevance. Cooper Kupp going down was supposed to be the signal for Higbee to begin his hall of fame tour. Alas, like a true Romeo and Juliet situation, Matt Stafford seems to be (maybe purposefully?) throwing himself into an early grave along with his favorite pass catcher. The QB has cleared the concussion protocol but will not play this week. As long as Higbee is without Stafford he will be hard to trust. Just look at his lack of production last week. Higbee was on the field for 59% of snaps but received zero targets. This was with Bryce Perkins under center. In Week 10 Higbee actually had a productive day with John Wolford at quarterback. Rumor has it that Wolford will get the starting nod this week. That’s decent news for Higbee, but I still would not recommend adding him to any lineups. Higbee began the season hot as the number two passing option. Unfortunately, he’s trending down thanks to the injuries around him.

Kenyan Drake rewarded fantasy managers brave enough to play him earlier in the season. But when Gus Edwards returned in Week 7 Drake saw his usage take a hit. He also saw Edwards fall into the end zone twice. Two games and 27 carries later, Gus Bus was back in the garage tending to his knee injury. Drake didn’t skip a beat and regained his lead-back role. Fast forward to last week, which saw Edwards return to action. It is clear that whenever Edwards is healthy Drake takes a backseat. This is evidenced by Drake’s two rushing attempts on a 25% snap count share. Edwards was able to escape last week’s matchup without injury. To make matters worse for Drake, J.K. Dobbins’ practice window opened up this week. So while Edwards dominates carries, Dobbins should be returning soon to claim his share. The running back pie in Baltimore isn’t large enough to feed a table of three. It seems that Kenyan Drake is trending down as he’s soon to be the odd man out when Dobbins returns.