Arguably the hottest name in the baseball world over the last 18 months or so has been Vladimir Guerrero Jr. And why shouldn’t it be? He’s only the top prospect around and the son of a Hall of Fame outfielder. No big deal. Up until now, Guerrero hasn’t been a name we’ve focused on in re-draft leagues as he didn’t make it to Double-A or Triple-A until last season. Now that he’s about to kick the proverbial door down, it’s time to ask the hard question of “Where do we draft him in re-draft leagues?” It’s a fun topic to debate.

If your dynasty league isn’t on Fantrax, you’re really missing out on the best dynasty fantasy baseball platform around. With the deepest player pool and most customization, Fantrax Commissioner has everything you could ever want for your dynasty league. So what are you waiting for?

Where to Draft Vladimir Guerrero Jr?

In keeper/dynasty leagues, he’s a no brainer in the top 20 picks and even in consideration for a top-5 overall pick. Yes, without a single MLB at-bat. Is it risky to use your first or second pick on a prospect? You bet your ass it is. But this is no ordinary prospect we’re talking about here. For the better part of last season, Guerrero was hitting above .400 while flashing his immense raw power. At season’s end, Guerrero’s average sat at a whopping .381 with a 1.073 OPS. We get it Vlad, you’re really good at this baseball thing. 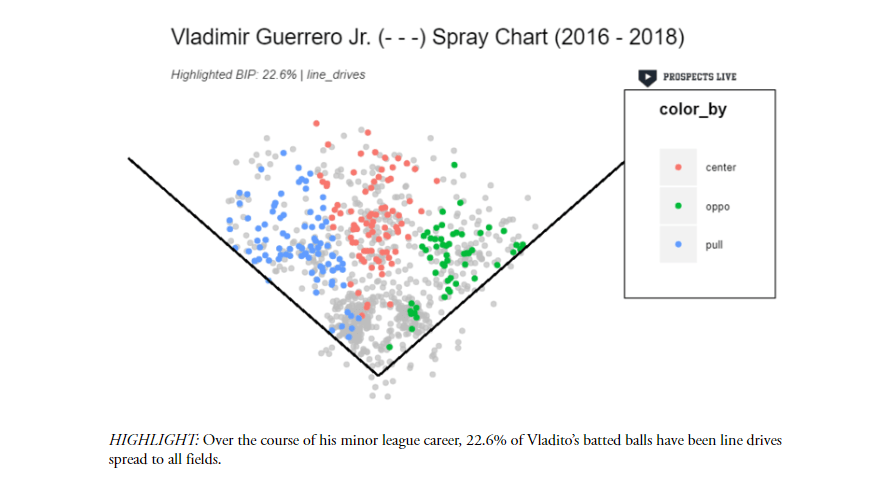 On the 20-80 scouting scale, 80-grades are sacred and rarely handed out. Vlad is so damn good that he nearly gets two 80-grades on his tools. Not one, but two. His hit tool is easily 80-grade and the raw power isn’t far behind. Add in an other-worldly approach and phenomenal contact skills and plate coverage, and it makes you feel better and better about his chances of performing at a high level out of the gate and becoming one of the top fantasy assets in short order. That’s worth of a top-10 dynasty pick in my eyes and is why I ranked Vlad 10th in my dynasty rankings.

In re-draft it’s a little more like 50 shades of gray. And no, that reference wasn’t because us prospect folk get all hot and bothered when discussing the greatness of Vladimir Guerrero Jr.

Let’s start with his Fantrax ADP which currently sits at 46.9 which is around 17 picks higher than it was just 1-2 months ago. As the season draws closer, the excitement for his debut continues to grow, pushing his ADP higher and higher. That shouldn’t shock anyone one bit. We haven’t had a prospect with this much hype since Bryce Harper and we’ve had some damn good prospects come up between Bryce and Vladdy. That’s saying something. With his ADP now inside the top-50, the question needs to be asked; Is that too high? And realistically, where should Guerrero be drafted for 2019 re-draft leagues?

In a 2019 re-draft #FantasyBaseball league, where would you feel comfortable drafting Vladimir Guerrero Jr.?

The Twitter masses seemed to be split between the 21-40 range and 41-60 range when I posed the question to them the other day with 72% picking one of those two ranges. Nearly one in six said they would take him top-20 with almost the same saying they would wait until after pick 60. Truly a mixed bag of answers, which I expected.

That ADP I mentioned above needs to be taken with a grain of salt too. In many mock drafts I’ve been in, Guerrero has been taken in the pick 25-40 range, with 45-55 usually being the low end of the spectrum. But how about when the chips are on the table and draft picks actually matter?

In current TGFBI (The Great Fantasy Baseball Invitational) slow drafts that are going on, Guerrero has an ADP of 43.8 across the 21 leagues, with his range being anywhere from 31st to 52nd off the board. Yours truly took him 38th overall, with the 8th pick in round three. Slightly above average, but If I wanted him on my team, data shows that there was a very high chance that he would not make it back to my next pick at #53 overall.

Do you want to spend one of your first four picks on a prospect that won’t be up until mid to late-April due to service time? Usually, that answer is hell no. BUT, and you knew there was a but coming, Vladdy’s upside could pay off big time. That was a risk I was willing to take in TGFBI. Go big or go home, right?

From Bryant to Guerrero

For a good comparison for this situation, we need to go back in time. So let’s grab Doc Brown, fire up the Delorean, and head way back to 2015. A young whippersnapper named Bryant was knocking on the door to Chicago but was rudely left out in the rain while everyone else partied inside. At least for a little while.

The hype around Kris Bryant going into the 2015 season was nearly as high as it is with Guerrero this season after KB17 put up a .325/43/110/118/15 line with a 1.098 OPS in the minors in 2014, earning him Minor League Player of the Year honors. This just one year after winning the Golden Spikes Award as the Nation’s best collegiate player in 2013.

The Cubs made up lies, held him down for two weeks, and brought him up in mid-April once they gained another year of service time. Funny how that works, right? Bryant went on to hit .275 with 26 homers, 99 RBI, 87 runs, and 13 steals in 151 games en route to the NL Rookie of the Year Award. That performance was more than enough to return top-40 value that season. Guerrero has a strong chance to do the same.

Like I mentioned above, Guerrero possesses an 80-grade hit tool and can barrel up basically any pitch he wants to. Remind you of anyone? There’s no reason why he can’t step in and immediately hit over .300. And while the gaudy power numbers haven’t shown up quite yet, Guerrero was on a 35-homer pace last season thanks to the highest flyball rate of his career. With the added loft to go along with his prestigious raw power, 30 homers is a real possibility in 2019 if he gets 500 at-bats.

Alright, so .300 with 30 dingers is a great start. But what about the other counting stats? As you can probably tell, Guerrero isn’t a speedster, so expecting more than 3-4 steals is foolish, but the runs and RBI should be fairly plentiful. The Blue Jays lineup doesn’t pack as much of a punch as it did a few years ago, but there are still some solid bats in this lineup that will be hitting around Guerrero once he plants himself in the middle of the order. Somewhere in the vicinity of 160-175 R+RBI should be attainable with that being slanted towards more RBI.

You’ll have to draft a fill-in for the first few weeks, but I got a hunch that you’ll be quite pleased with your investment for the last 90% of the season.

When it boils down to it, drafting Vladimir Guerrero Jr. in the first 3-4 rounds this year is a big risk/reward pick. As you can see from my projection below, I believe he’s going to step right in and be a force from day one. No level has overmatched him yet and I don’t expect the Major Leagues to be any different. There’s always the chance that he struggles and puts up a less than Vlad-like season. I mean, he is a rookie after all. But if I was a betting man, I wouldn’t put my money on that. I feel confident in taking him around picks 35-45 as my 3rd or 4th pick. Yes, you’ll have to find a fill in for a few weeks, but who cares? From the moment Vlad steps on the field, his offensive potential could return top-20 value the rest of the way.

Dokken’s Dudes & Dont’s: Best and Worst Values at Second Base