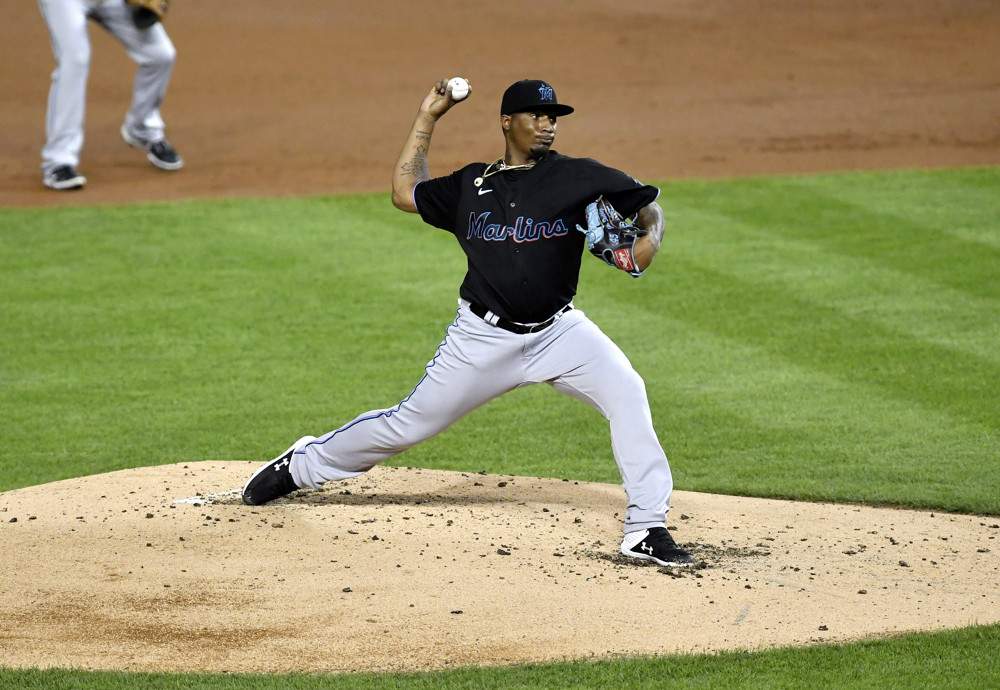 Just as quickly as it started, the 2020 MLB regular season is now in the books. It was a fun, yet abbreviated, ride and we now have the  difficult task of trying to decipher all these short-season performances. On the rookie/prospect side of things, one of the top pitching performances came from Miami’s flame-throwing right-hander Sixto Sanchez. Let’s take a look at how he got the job done, what makes him so intriguing in our fantasy world, and how he should be valued moving forward, both for 2021 and in dynasty leagues.

What To Do With Sixto Sanchez?

That’s the question I’m going to try and answer today. Sanchez dominated in the minors and continued that domination in his seven-start debut with Miami. With how he’s performed to date and his nasty arsenal, Sánchez is one of the more interesting arms around entering the 2021 season.

A big part of the puzzle for Sixto Sanchez having success has been establishing his fastballs. Sanchez throws both a four-seamer and a sinking fastball, with nearly equal usage totaling 47.4% of his total pitches thrown. 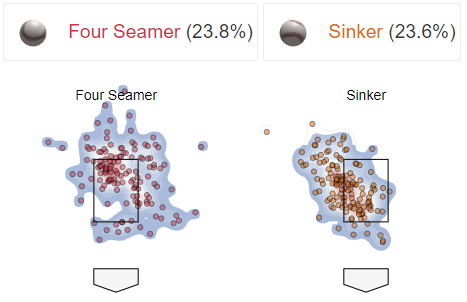 Sanchez isn’t the tallest guy in the world at 6′ even, but his core strength, tree trunk legs, and electric arm speed allow him to regularly deliver upper-90’s gas, touching triple digits at times as well. His average velocity on his four-seamer sat at a blazing 98.6 mph this season with his sinker averaging 96.6 mph. Those ranked 3rd and 21st respectively in baseball this season with only Dustin May and Brusdar Graterol registering a higher average four-seamer velocity than Mr. Sánchez.

When analyzing each pitch, you have to be encouraged by Sánchez’s command and location. He rarely leaves a four-seamer knee to waist high, avoiding that ideal bat path where sluggers try to capitalize and drive pitches in the air with an optimal launch angle. That’s seemingly been a bigger focus for hitters these days, especially with the advancement of analytics over the last handful of years. Hitters are trying to drive the ball in the air with a big focus on launch angle. Sixto did a phenomenal job this season avoiding that danger zone I mentioned above, consistently working his heater up in the zone. That used to be a dangerous way to operate as a pitcher. Not anymore.

While Sánchez did allow a couple of home runs on his fastball which drove up his SLG, xSLG, etc, he only allowed a .217 BAA, and .221 xBA. So, outside of a couple of mistake offerings, his fastball was a highly effective pitch this season.

As for his sinker, the results were less than stellar with a .368 BAA, but his xwOBA and xSLG were actually lower than his four-seamer.  Honestly, I don’t give a crap that he allowed a .368 BAA on his sinker. That means nothing when it’s an extremely small sample size of 132 sinkers thrown. What needs to be focused on is his command, location, velocity, and movement he generates on the pitch. Sixto’s sinker ranked in the top-20 (min 100 thrown) for both horizontal movement vs average and vertical movement vs average. Nearly all of the other sinkers around him were 2-3 mph slower as well.

Now, onto the secondary offerings. If you thought Sixto Sanchez’s four-seamer and sinker were impressive, just wait until you see his secondary offerings. Usually, I leave the best for last, but with a changeup like this, I just can’t do that here. Simply put, this is already has one of the best changeups in baseball. Sanchez’s changeup ranked 8th in xBA, 5th in xwOBA, 6th in xSLG, and 13th in putaway rate.

Sanchez throws it harder than nearly every other changeup on the player at an average of 89.0 mph, but that’s still a 9.6 mph velocity separation from his fastball. Add in the fade and sink Sanchez generates with the pitch and it’s nearly impossible for opposing hitters to square up and drive. This isn’t anything new either as Sixto’s changeup garnered plus to double-plus grades as a prospect coming up through the Philadelphia and Miami systems.

That changeup is regarded as Sixto’s best secondary offering, but his slider isn’t anything to scoff at either. Sure, the metrics don’t inspire much confidence when you see a .320 xBA and .394 xwOBA, but when you watch Sixto pitch and see him deliver these filthy sliders, it’s hard not to get excited about the longterm potential impact of the pitch. As a prospect, many graded Sixto’s slider as either above-average or plus thanks to the velocity and sharp two-plane break. His curveball was considered the lesser of the two breaking pitches but was much more effective in 2020.

One aspect that I love about Sanchez’s arsenal and pitch mix is that he’s not afraid to throw any of his five pitches to right-handed or left-handed batters. Sure, he’ll use his slider more against RHB and changeup more against LHP, which is normal, but Sánchez knows his stuff, has confidence in his stuff, and will attack any batter with it. You can’t narrow it down to just two pitches as an opposing batter, you have to be ready for any of Sixto’s five pitches. That must be a nightmare.

Good luck with that.

One last thing to inspire even more confidence in Sixto is his ability to induce plenty of groundballs and limit the longball.

That’s a recipe for success right there.

One significant question surrounding Sixto Sanchez and his future value is what will the strikeout rate look like? Strikeouts certainly aren’t everything, but without question, they’re a big part of a pitcher’s fantasy value. Just look at Dustin May for example. I hate to keep using May as an example and feed the “Eric hates Dustin May” crowd, but he’s a perfect example of how a lower strikeout rate can cap fantasy value. There’s no doubting that May is one of the filthiest pitchers in the game, but he posted a 6.75 K/9 and 18.6 K%, both of which ranked in the bottom-25 out of 109 pitchers with 40+ innings pitched in 2020.

May and Sanchez often get mentioned in the same breath as both are dynamic young arms that haven’t had the strikeout rates you might expect when watching them pitch. And in fact, Sanchez had a lower strikeout rate than May in the minors posting a 7.9 K/9 compared to May’s 8.8 mark.

So, why have I been so critical of May’s bat missing inefficiencies and not Sanchez’s? Simple. It’s all about the pitch mix. May relies heavily on his sinker and cutter mix and very little on his curveball and changeup. May throws offspeed/breaking pitches just 18.4% of the time and has yet to establish his curveball or changeup as consistent Major league offerings. Sixto, on the other hand, throws his secondary offerings a combined 52.7% of the time with his filthy slider or changeup making up 44.8% of that.

So, not only does Sánchez have better secondary offerings, he also throws them much more frequently. When the biggest swing and miss offerings are usually breaking and offspeed pitches, this makes me much more confident in Sánchez’s strikeout potential than May’s moving forward.

Another aspect to note is Sánchez’s impressive ranks when it comes to generating swings from opposing batters. The ranks below are out of 153 pitchers with 30-plus innings in 2020.

While he might never ascend to being a league-leading strikeout artist, Sanchez’s arsenal hints at more strikeouts in the future.

Hype Train Out of Control

This section was my main reason for constructing this article. Over the last month, I’ve seen various people say that Sixto Sanchez is the best pitcher in the NL (at the time) or a top-15 overall pitcher in baseball. Others are now questioning if he’s the best pitching prospect in baseball, even over MacKenzie Gore. The pitching GOAT himself, Pedro Martinez, even compared Sixto to himself. Hot damn. Let’s calm down for a second.

Yes, Sixto is filthy and one of the most exciting young arms in the game today, but these are incredibly lofty statements and comparisons. Does he have the potential to be a top-15 pitcher in the game? Sure does. But let’s not anoint a rookie pitcher with seven starts and 39 innings under his belt as a stud quite yet. In fact, Sixto falls under one of my three ideal scenarios to try and sell high on a prospect.

Sixto Sanchez is squarely in the third scenario above. Even with his last two starts putting a damper on his sizzling hot first five starts. I’m not saying you should actively try to get Sánchez off your team. Far from it. It would be foolish to do so. However, what I am saying is that it can’t hurt to throw his name on the block or as an available player in trade talks to see if someone will grossly overpay for him. From some of the trades I’ve seen people on Twitter mention involving him, it’s definitely plausible.

If it wasn’t clear from the above, I’m very high on Sixto Sanchez moving forward. He has the stuff, command, and control to pitch atop Miami’s rotation for a very long time and be a force for anybody that rosters him in fantasy. But as I mentioned in the previous section, right now is the perfect time to make him available in dynasty.

Dynasty Value: After ranking Sixto in tier three of pitching prospects, his recent domination has pushed him up firmly into tier two and into the same range as Nate Pearson and Matt Manning. Basically, he’s a top-5 pitching prospect in the game and already a top-100 dynasty asset in my overall top-500. If he’s able to continue maintaining low ratios while increasing his strikeout rate, we could be looking at a top-10 SP and top-50 overall player down the road.