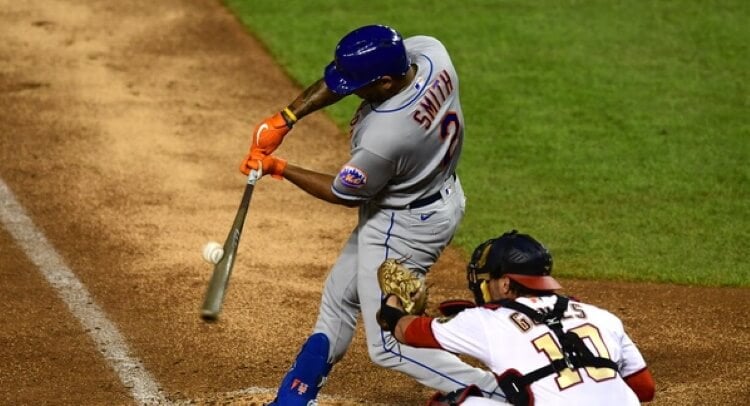 The 2020 season has come and gone with the blink of an eye. Now it is time to look forward to 2021. The challenge when evaluating players for next season becomes, how much stock should we put into the 60 game 2020 season? Here at FantraxHQ, the grind never stops, and we are covering a multitude of players and how we should value them moving forward. Dominic Smith will be the first player I will evaluate.

Most Fantasy Baseball players did not expect Dominic Smith to be Fantasy relevant given his ADP. In Fantrax leagues, he was drafted at an average pick of 640. In NFBC leagues, it was not much higher at 584. With the chance at regular playing time, Dominic Smith has taken his game to another level in 2020. The growth in Smith has been encouraging this year, but what can we expect moving forward? Let’s dive into his profile.

* All Stats current as of September 26

As I write this with just two games left for the Mets this season, Smith has been nothing short of amazing for Fantasy owners. He was a league-winning waiver wire pick up thanks to his .322/.383/.626 slash line. In 196 plate appearances, he has hit 10 home runs and driven in 42 runs. If you extrapolate what he has done over a 162-game season, you would have a line of 33 HR/89 R/139 RBI—quite an impressive season from Smith. The turnaround season had a lot to do with significant weight loss, which led to production at the plate. Smith just turned 25 years old and is taking care of his body. He also made a swing change this season. Check out the video below, courtesy of Mike Kurland. Smith’s hands are lower, and he is more crouched at the plate.

Smith’s bat speed is plus, and the hit tool is solid. We may have seen peak Dominic Smith this season, but it is hard to imagine the floor being significantly lower. Let’s look into some advanced metrics.

Diving into Dominic Smith’s plate discipline, there does not appear to be a ton of change. He is swinging more, which, in a way, is encouraging. His swing percent on pitches out of the zone(O-Swing%) is up 2.5 percent, but it is not high enough to worry me. He is making more contact overall, especially in the zone(Z-Contact%), at 84.5 percent. Smith’s swinging strike rate is up a hair at 12.6 percent, but again, it is not overly concerning.

Plate discipline is always an important thing to check in a hitter’s profile. Players who make poor contact usually have inconsistent production over a full season. There is not a ton here to analyze as most of Smith’s numbers stayed pretty steady. Smith makes solid contact and has good plate discipline, so there is nothing to be fearful of here.

At first glance, Dominic Smith made significant strides in many areas of his advanced stats. First, his OPS of 1.009 is quite impressive, even in a 60 game season. That places Smith sixth in baseball in that category, just .001 percentage points behind Ronald Acuña. The high OPS is mostly thanks to an impressive slugging percentage, which is fourth-best in baseball. While Smith is not among the league leaders in home runs, he has the second-most doubles, just one behind Freddie Freeman’s league-leading 22. Looking at his spray chart for the season, you can see many doubles and long outs that could turn into home runs. 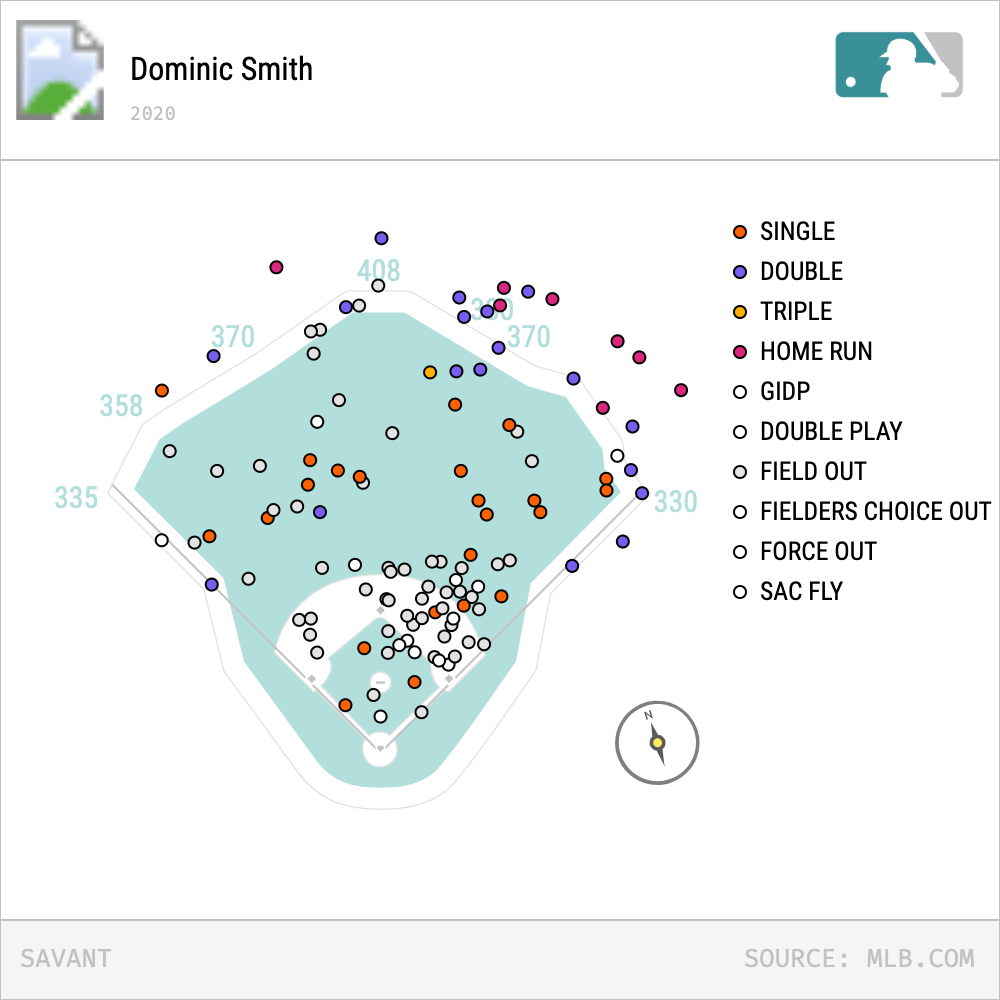 Another notable stat is an increased BABIP of .377. While some may see that and immediately think it is unsustainable, Smith has traditionally carried a high BABIP throughout his professional career. Smith also rates very well in “Launch Angle Tightness,” a stat established by Alex Chamberlain. Of players with 100 batted-ball events this season, Smith ranks 19th among hitters in LA tightness. I will talk about that stat more later, but it has a high correlation with BABIP.

Naturally, as Smith hit the ball well this season, his wOBA and wRC+ have seen huge jumps. Overall, the advanced stats show many improvements that he has made at the plate. I also do not see anything in his profile that screams regression other than his BABIP. Even with some small BABIP regression, Dominic Smith’s advanced stat profile looks very encouraging moving forward.

Looking at Dominic Smith’s batted ball profile shows some encouraging growth. While it is nothing huge, Smith noticeably increased his line drive rate while decreasing his fly ball rate to a healthy level. The increase in line drive rate to 26.5 percent likely led to an increased BABIP and batting average. 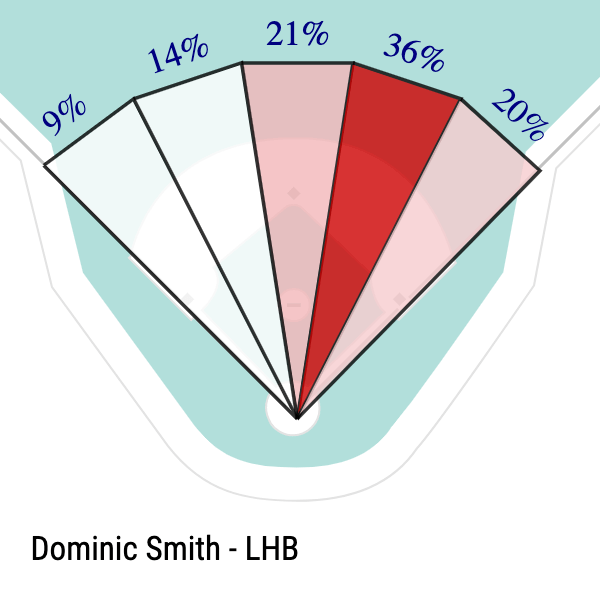 Smith is also pulling the ball more, as shown in the chart above and his slice chart below. His opposite-field rate is down over six percent to 19.7 percent, but that is not necessarily a bad thing. His pulled balls have been some of his hardest-hit and have been the majority of his extra-base hits. These statistics are encouraging as Dominic Smith is just 25 years old and continues to refine his approach at the plate.

As a left-handed hitter, Dominic Smith hits left-handed pitching very well. He was more of a platoon option in his 2019 games but has now gotten a regular chance against both LHP and RHP. In 2019, while a smaller sample, Smith performed better against lefties with a .303 batting average.

2020 has flipped that script but not significantly. Smith is still hitting .283 against left-handed pitching, but an impressive .339 against righties. The majority of Smith’s home runs also come against righties, making sense as he can turn on pitches more and use his pull-side power.

Summed up, Dominic Smith should not be used in a platoon situation as he hits exceptionally well against both left and right-handed pitching. Smith has proved his worth to be an everyday player each of the last two seasons, and you should expect that moving forward.

Dominic Smith made significant strides in several statcast categories in 2020. At first glance, the lower average exit velocity stands out to me. At 89.8 mph, Smith has a slightly above-average exit velocity. Looking a little deeper, 94.9 mph exit velocity on line drives and fly balls is more encouraging and right in line with some hard hitters like Pete Alonso and Vlad Guerrero Jr. His max exit velocity of 110.7 mph shows Smith’s ability to hit the ball hard.

Smith has barreled the ball exceptionally well in 2020. A barrel is a batted-ball event whose comparable hit type in terms of exit velocity and launch angle have led to a minimum .500 batting average and 1.500 slugging percentage. It must be hit with at least an exit velocity of 98 mph. Summarized, a barreled batted-ball turns into a hit more often than not and usually turns into an extra-base hit. Smith has a barrel per-plate appearance of 9.2 percent, suitable for 22nd best in baseball. His overall barrel rate of 13.6 percent is better than 87 percent of hitters. 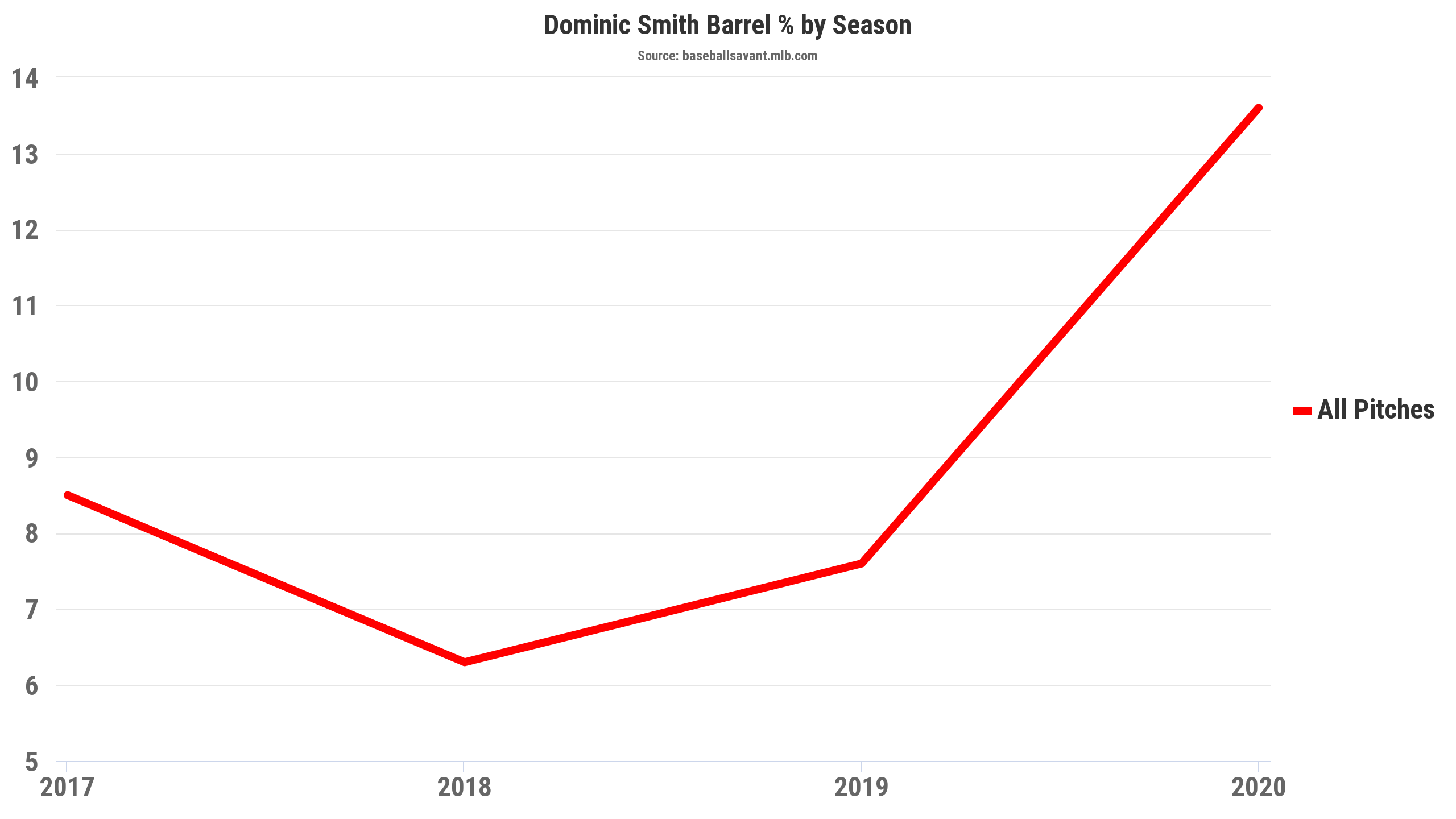 Sweet spot percentage is another useful statcast statistic as it quantifies a batted-ball event with a launch angle between eight and 32 degrees. It is useful when pairing with a hard-hit rate, a batted ball with an exit velocity of 95 mph or higher. While Smith has an average launch angle of 10.6 degrees, he is hitting the sweet spot 43.2 percent of the time. Pairing the sweet-spot percentage with a 46.2 percent hard-hit rate shows very positive signs of Dominic Smith being a great hitter. 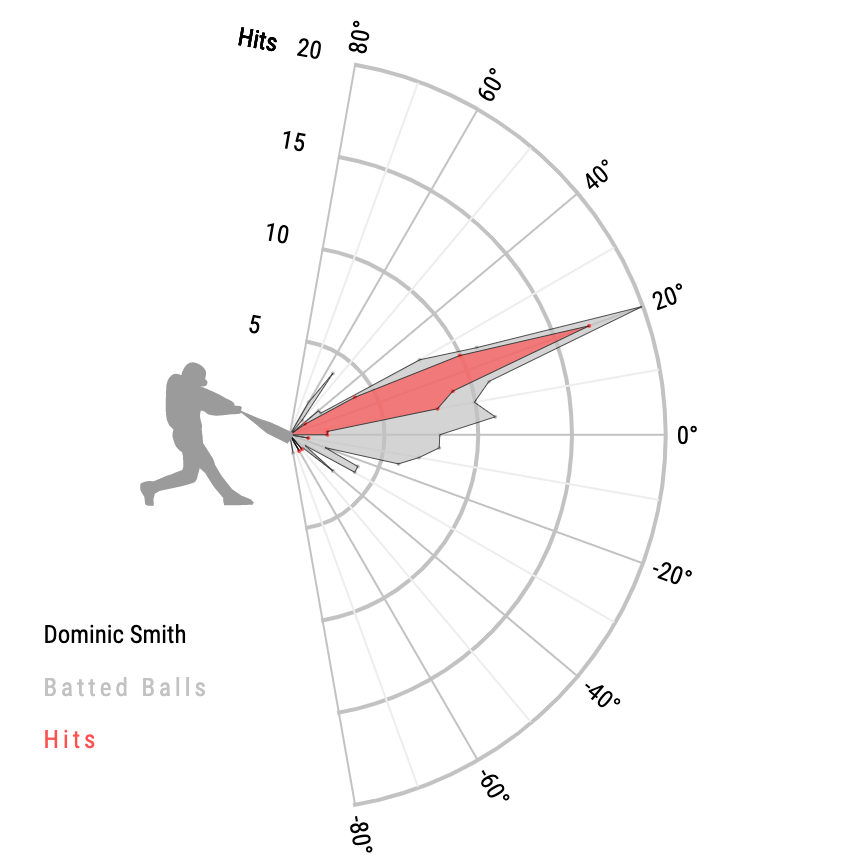 Looking at the chart above leads me to another critical stat mentioned earlier, Launch Angle Tightness. Alex Chamberlain has a great article titled: “Let’s Talk About Launch Angle “Tightness.” Launch Angle tightness is in terms of variance; the narrower the distribution of launch angles, the tighter the variance is. Dominic Smith has a launch angle tightness of 24.9 degrees, good for 19th best among hitters with 100 batted-ball events. You can see in the chart above the tight distribution of his batted-balls. There is a strong correlation with launch angle tightness and BABIP. Let’s go back to Smith’s high BABIP of .377. Is it a sustainable number over a full season? Likely not. But given much of his profile, Smith is the type of player who can sustain a higher BABIP.

Looking at Smith’s expected averages, he rates in the 90th percentile or better in xBA, xwOBA, and xSLG. His .308 xBA suggests that he has been an elite hitter, and he ranks in the top seven percent of the league. His xwOBA of .404 and xSLG of .607 are also quite impressive numbers.

Overall, Dominic Smith’s statcast data is quite impressive and gives hope that he can continue these trends moving forward. It is not by accident Smith statistics have improved significantly in 2020.

Given what we have seen from Dominic Smith, it is hard to argue he will not be a solid Fantasy contributor in 2021. The underlying data all support the strong breakout season from Smith. Is this peak Dominic Smith at the plate? It is possible. But the floor on Smith is also not much lower. The concern for Smith is where he will play in the field. This year, he split time pretty evenly between 1B and LF. If the designated hitter sticks in the National League, it diminishes any question of Smith’s playing time.

If I were to place a projection on Dominic Smith for 2021, it would be a .280 batting average with 25 home runs. Given Smith’s eligibility at first base and outfield, he brings even more value to the table. It is hard to peg where Smith’s ADP will end up for 2021, but I would guess he is going after pick 125. If that is the case, Smith is a player I will have on a lot of teams.

Thanks for reading. If you have any questions, feel free to reach out on Twitter @RotoClegg.

If you play in a dynasty league, be sure to check out my article on players you should be stashing for 2021.