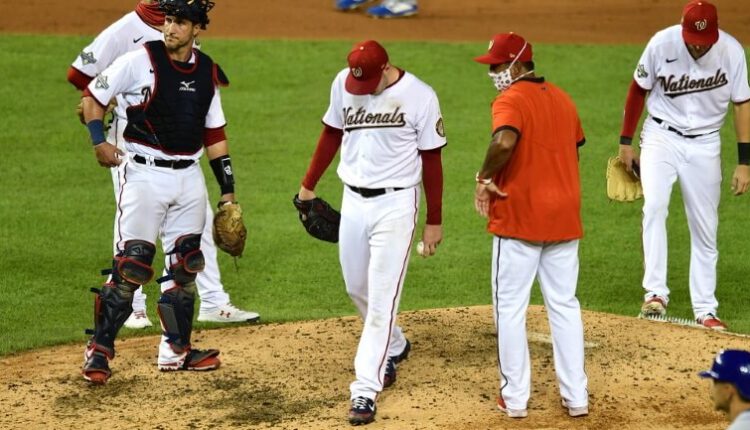 Welcome to the 2020-2021 MLB offseason! Well, I guess the playoffs are still going on so technically I may be jumping the gun a little bit. While I will be watching nearly every playoff game that I possibly can over the next few weeks, I’m very excited to be looking ahead to next season. In a season in which a global pandemic was occurring and we only had 60 games of data, it is incredibly hard to make assessments about players and their performances, and that includes Patrick Corbin, who I’ll be looking at in this article.

This offseason, I’ll be doing a series of articles looking at what went right, what went wrong, and the overall 2021 outlook for certain players. I can only take into account the data that has been given and use that to best assess what to expect from them next season. This should be fun! Let’s dive into our first player in this series: Patrick Corbin.

What Went Right for Patrick Corbin in 2020

While Corbin got hit hard in 2020, he maintained the great control he’s shown in recent seasons. Corbin maintained a mid-40% zone percentage on his pitches while throwing first-pitch strikes to get ahead in the counts over 62% of the time as he has each of the last three seasons. This helped contribute to his 6.1% walk rate, which was one of the lowest of his career. Corbin being able to show that he can still command the zone and limit his free passes has me optimistic that with some smaller tweaks, his stuff will be able to fool hitters to get his K% back up. The control starts the engine and Corbin looks to still have that through this ugly season.

In a year where not a lot went right for the guy, this was one of the few things that improved. Corbin maintains a five-pitch arsenal that relies heavily on the slider, sinker, and four-seam fastball. However, Corbin has thrown a change-up approximately 5% of the time each of the last two years. Knocking 4 mph off his change-up this year, I believe, really helped keep the hitters more off-balance when seeing it. This led to a .227 BAA and SLG as opposed to an ugly .370 BAA and .556 SLG in 2019. The change also led to a decreased exit velocity off this pitch will really help his arsenal for 2021.

There is a lot of attention paid to a pitcher’s fastball velocity, and rightfully so. When a pitcher has a higher velocity on their fastball, not only will it have the chance to blow away hitters, but it will also help their secondary arsenal that much more with the speed difference. Corbin lost 2 tics off his fastball velocity in 2020, making an already mediocre 92 avg mph pitch, a 90 avg mph pitch. This was one of the key factors for why his batting average against his fastball went from .232 in 2019 to an ASTOUNDING .407 in 2020. That’s a problem.

When you hear that a pitcher throws a nasty slider, one of the first names that should pop into your mind is Patrick Corbin. In 2019 it maintained a 52% whiff rate. In 2020, that went way down to 38%. The increased use of his great slider was one of the main reasons that Corbin had averaged over 10 K’s per 9 over the previous two seasons. This season? Down to barely over 8.0. Corbin’s slider will need to be an effective pitch in 2021 if he wants to be the top tier arm you’re drafting him as.

If you look at Corbin’s baseball savant page, he’s what I would call a Mr. Freeze (As I’ve referenced on our Podcast Triple Play Fantasy) where their page is entirely all blue. That’s Corbin this year. One aspect of all Corbin’s data is that his exit velocity was the highest of his career at 90.7 mph. That means hitters are not just hitting the ball off of him, but hitting it hard. His hard-hit percentage and his launch angle are also career highs in this category, which led to him allowing nearly half of his home run total from a full season ago. In short, he wasn’t fooling batters, as his last 7 starts of an 0-6 record with a 5.06 ERA and INSANE 1.78 WHIP. That WHIP? That’s from 62 hits and 14 walks over his last 42.2 innings pitched. That is also one of the big reasons his xERA was 5.25 and he was extremely lucky to have it as the 4.66 he finished with.

I want to point out first and foremost, this might be one of the biggest reasons why Corbin looked like an extremely different pitcher in the stat sheets. Corbin had an O-Contact % of 54%, his highest since 2016. His O-Contact % on his best pitch his slider, jumped up nearly 20% from 2019! It was nearly 47% this year and had never even reached 40% at any point in his career. When a pitcher is getting hit hard in the zone is one thing. Corbin was consistently getting hit hard with pitches, specifically his slider, outside the strike zone. That is something I would expect to normalize in a full regular season and although it looked ugly in 2020, could be something that gets his stats more in line with his career norms.

Patrick Corbin’s ADP is sure to take a hit from the top 20 starting pitchers he was ranked as this season. The strikeout upside should still be there and he still boasts one of the best sliders in the game. Having been very durable over the last few seasons, this is someone who at worst, should provide a nice SP4 floor with SP2 upside. With all this said, Corbin should be at a great discount from years past and you should draft him as the upside arm with volatility. He should have a full spring training next year to hopefully ramp back up his velocity, but that will be a key thing to watch going into drafts next year. If Corbin’s velocity goes back up to his career norm and his slider maintains the movement and efficiency we’ve seen against hitters in the past, this will be a great bounceback candidate for next year that I would be happy to grab in the mid-rounds of my draft.