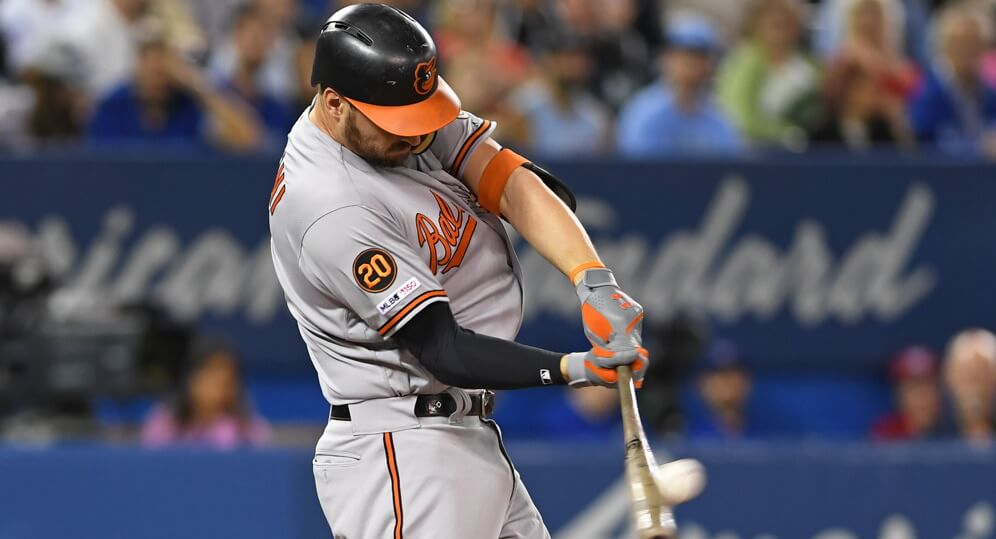 The 2020 season may only have a couple of days left, but it is never too early to think about 2021. If you are in a dynasty league, you know you must always plan ahead. Maybe you have checked out of Fantasy Baseball and have missed some players who have come on strong over the last several weeks? Perhaps you forgot about players coming back from injury or suspension. That is the purpose of this article. To remind you of some players you should pick up and stash that could have a big 2021 season.

It is safe to assume pitchers like Chris Sale, Noah Syndergaard, and Luis Severino are already stashed depending on the depth of your league. The three are coming off Tommy John surgery and slated to return at some point in 2021. Sale and Syndergaard are rostered in 61 percent of Fantrax leagues and Severino in 48 percent. If you happen to be in a dynasty league where any of these three are available, snatch them up now!

The ultimate goal if this article will be to find players who should be available in some dynasty leagues and help you win your leagues in 2021.

Don’t Forget About Me! (Injury Returners)

It has been over a year since Jameson Taillon underwent his second Tommy John surgery in August of 2019. Taillon is far from the pinnacle of health. Two Tommy John surgeries and testicular cancer have deterred him from what could have been a successful career. Upon returning to the mound from cancer in 2018, Tallion posted 14 wins, a 3.20 ERA, and 179 strikeouts. His shortened 2019 season was solid but not great as Taillon pitched to a 4.10 ERA and a 19 percent strikeout rate in 37.1 innings.

Taillon should be ready to go for the start of the 2021 season. While it seems like he has been around forever, he will be just 29 years old during the 2021 season. Taillon could also benefit from a new regime over the Pirates pitching. Reports out of the Pirates training site are that he has been throwing 25 pitches regularly, which is an encouraging sign. If Taillon is still available in your dynasty league, he is a player worth stashing for next season.

It sincerely breaks my heart that each of the first two players I have covered has dealt with cancer. After slashing .291/.364/.535 with 35 home runs in 2019, Mancini looked to be an excellent value at his ADP coming into 2020. In late April 2020, Mancini was diagnosed with stage three colon cancer. The diagnosis caused Mancini to miss the entire 2020 season.

TREY DID IT!!!! He competed chemotherapy!!! What a six months it has been. I’ve never been more proud & joyful ☀️ this is the best day ever!!!! Thank you for all the love and support. We are SOOOO grateful!!!!💗💗💗 @TreyMancini pic.twitter.com/dM7amk92GH

Mancini has now finished his chemotherapy as of September 21. He is expected to make a full recovery and play baseball again. He is currently owned in 55 percent of Fantrax leagues. But, if he is available in your dynasty league, he is a player I want to stash for 2021. If he comes back healthy, Mancini can be a difference-maker for your fantasy team.

Tyler Beede was an intriguing deep-league option for Fantasy Baseball in 2020. Unfortunately, in Spring Training, Beede was shut down after tightness in his right elbow. After an MRI and several consultations with doctors, Tommy John surgery was recommended. After a long recovery from surgery in March, Beede resumed throwing for the first time mid-September.

First day @ 60 feet – felt solid!! I know a few others guys are going through this process, don’t hesitate to reach out on here or instagram if you have any questions about the process! pic.twitter.com/pzWxVSwwyl

Last season, Beede pitched 117 innings and had a 5.08 ERA, but pitched solid down the stretch in September of 2019. Beede is more of a deep league stash for 2021. But if you see the need for a starting pitcher on your dynasty team, Beede is worth a stash in deeper leagues.

The Mariners outfielder Mitch Haniger has not played a game since June 2019. The first injury came from fouling a ball off his groin, requiring surgery. While rehabbing from that injury, Haniger injured his back, causing him to miss the rest of the 2019 season. Haniger then aggravated his groin in January 2020 while taking batting practice causing him to undergo another operation. Haniger is building up strength and endurance in workouts, which is a positive sign moving forward.

Haniger’s time in Seattle may be running short as the Mariner’s Kyle Lewis could win AL Rookie of the Year in the outfield on top of young stars Jarred Kelenic, Julio Rodriguez, waiting in the wings. If Haniger can get back into form, he has been good when he is on the field. His 2018 season, where he slashed .285/.366/.493 with 26 home runs and eight stolen bases, showed Haniger’s true potential. Maybe he finds a new home with another team and can get a fresh start in 2021? For now, he is a possible stash in deeper dynasty leagues.

Another Mariner player, Andres Muñoz, could be the team’s closer in 2021. Many pegged Muñoz as the Padre’s future closer before trading at the deadline for Austin Nola, Austin Adams, and Dan Altavilla. It was a win-now move for the Padres who sent Muñoz, Taylor Trammell, Ty France, and Luis Torrens to the Mariners.

Muñoz underwent Tommy John surgery in March, but that should not stop him from being a dominant reliever at some point in 2021. The fireballer averaged 99.9 miles-per-hour on his fastball and has posted high strikeout rates throughout his career. He also features a devastating slider that hitters love to chase out of the strike zone. It is also essential to note Muñoz was doing this at 20 years-old last season. It is easy to see a top-five closer in the future, and he is a player you want to own in dynasty leagues. He is only owned in 27 percent of Fantrax leagues, so I would suggest grabbing him if he is available.

A cryptic Instagram post led some to believe the suspended Yankees starter, Domingo Germán, was retiring from baseball. Germán later stated that he let his emotions get the best of him, and he would not be retiring. He was in the middle of a breakout 2019 season before being placed on leave due to violating the league’s domestic violence policy. Germán racked up 18 wins in 24 starts and had 153 strikeouts to go with a 4.03 ERA. He lowered his walk rate but struggled with the home run ball. If Germán can limit home runs, he could be an excellent pitcher for Fantasy purposes.

Regardless, Germán will be eligible to return for the 2021 season and be just 28 years old. With the Yankees having several starting pitchers as impending free agents, Germán should have a spot in the rotation. There are question marks, but Germán can make a substantial impact on your Fantasy team in 2021. If he is available in your dynasty league and you have an open spot, I would consider stashing him.

Emmanuel Clase blossomed into one of the top relief-pitching prospects in baseball in 2019. As a flame-throwing reliever, Clase got the call to the bigs at 21 years-old. Relying heavily on his 99.5 mph fastball and a slider that averages over 90 mph, Clase has ninth inning stuff. His strikeout numbers were underwhelming at 22.3 percent, but his 2.31 ERA and 1.11 WHIP showed the young flame-throwers potential.

Clase was the headliner of the trade that sent Corey Kluber to Texas. It showed how highly the Indians valued Clase to deal Kluber for him and Delino DeShields. Unfortunately, he was suspended for violating MLB’s drug policy. He will be eligible to return in 2021 and should be in the mix to get saves in Cleveland with Brad Hand and James Karinchak. If you have space, Clase could be a viable dynasty stash who could provide excellent ratios and the potential for saves in 2021.

Strong Finishes to the Season

If you checked out of the Fantasy Baseball season early, you have probably missed some players who have emerged with strong Septembers. Several of these players listed have set themselves up nicely to be big-time contributors in 2021.

Ty France is a benefactor of being on a new team. He was traded from a stacked Padres lineup to the Mariners, where he has the chance to thrive with everyday playing time. Since his move, France is slashing .297/.357/.469 with a pair of home runs in 70 plate appearances. France also showed his potential by dominating triple-A in 2019 when he batted .399 with 27 home runs and a 1.247 OPS. France has multi-position eligibility and is only rostered in 42 percent of Fantrax leagues. If he is available in your dynasty league, now is the time to grab him before a potential 2021 breakout. 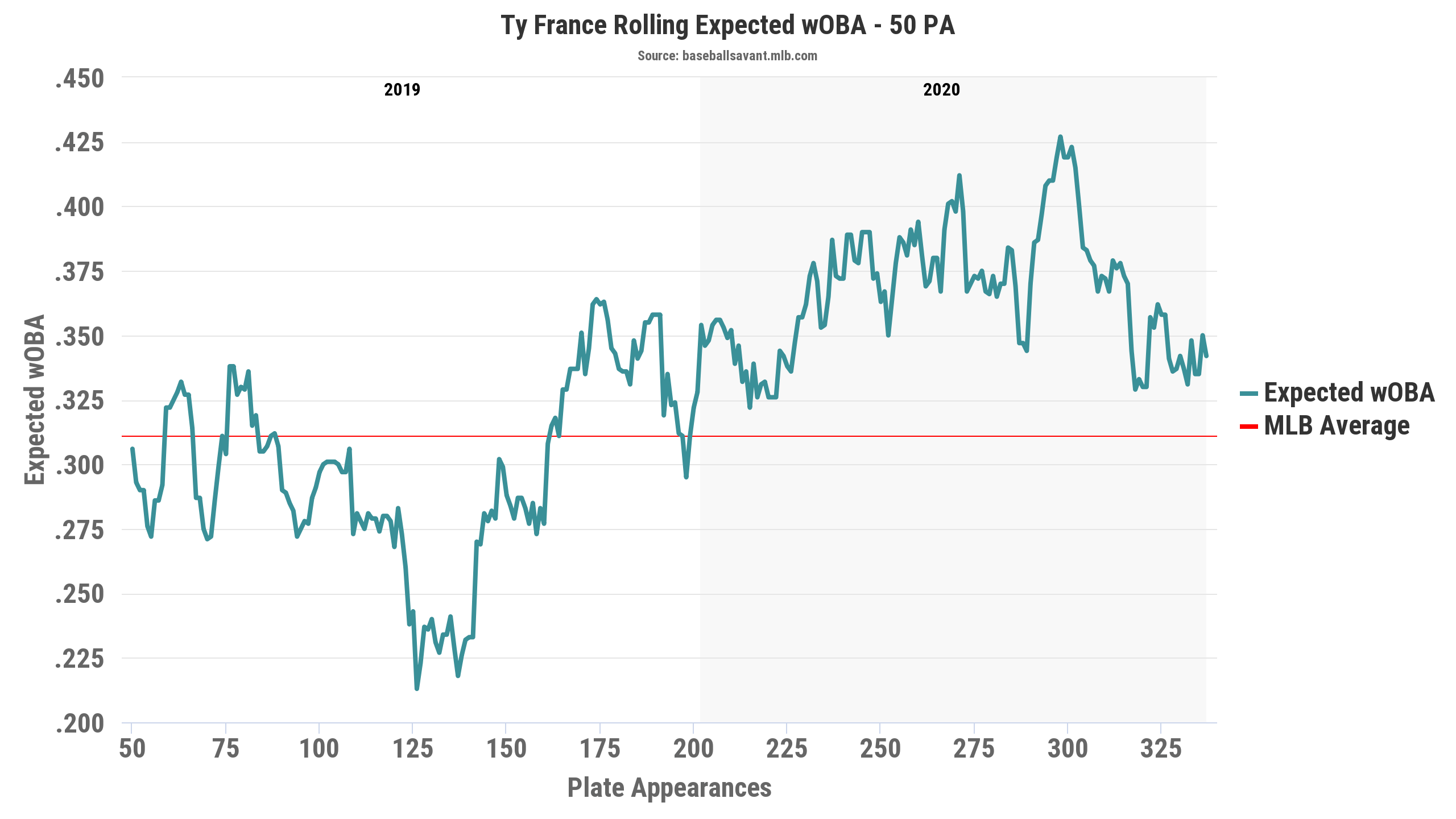 One of the most added players on Fantrax over the last week is a guy whose name you might not have known before this month, Jared Walsh. Still available in over 50 percent of leagues, Walsh is a player you should get on your dynasty roster. The Angels’ first baseman quietly dominated triple-A in 2019 with 36 home runs, a .325 batting average, and a 1.109 OPS.

Since the start of September, Walsh is slashing .375/.394/.844 with eight home runs. He has likely been a league winner for many, and while some may see it as a fluke, Walsh is worth a stash in dynasty leagues to see if his performance can continue into 2021.

After solid Minor League seasons in 2018 and 2019, many thought Nate Lowe was ready to take off at the Major League level. Even in his pro debut last year, Lowe hit seven home runs and batted .263 in 169 plate appearances. Due to the lack of playing time and the fact he exhausted prospect eligibility last year, Lowe is forgotten about in dynasty leagues. Lowe is now getting the chance to shine with everyday at-bats in Tampa Bay.

Upon getting regular playing time again on September 5, Lowe has performed well, slashing .271/.364/.563 with four home runs in 55 plate appearances. His statcast page also shows he has hit the ball extremely hard and in the sweet spot at a high percentage. It has left many wondering what if Lowe had been playing all season. Lowe’s ownership on Fantrax is up to 58 percent, so he is possibly still available in your dynasty league. If he is, he is well worth the stash. 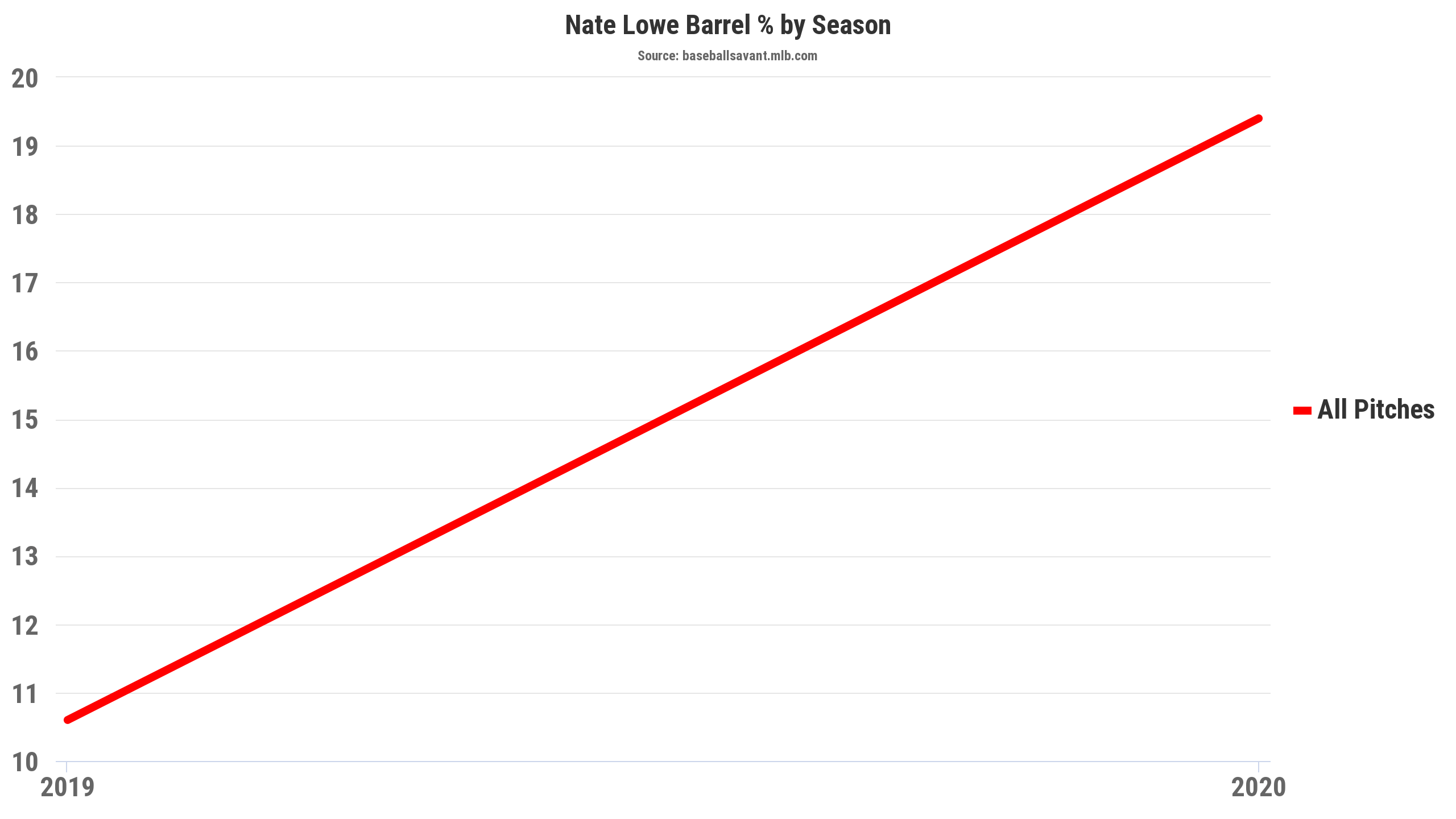