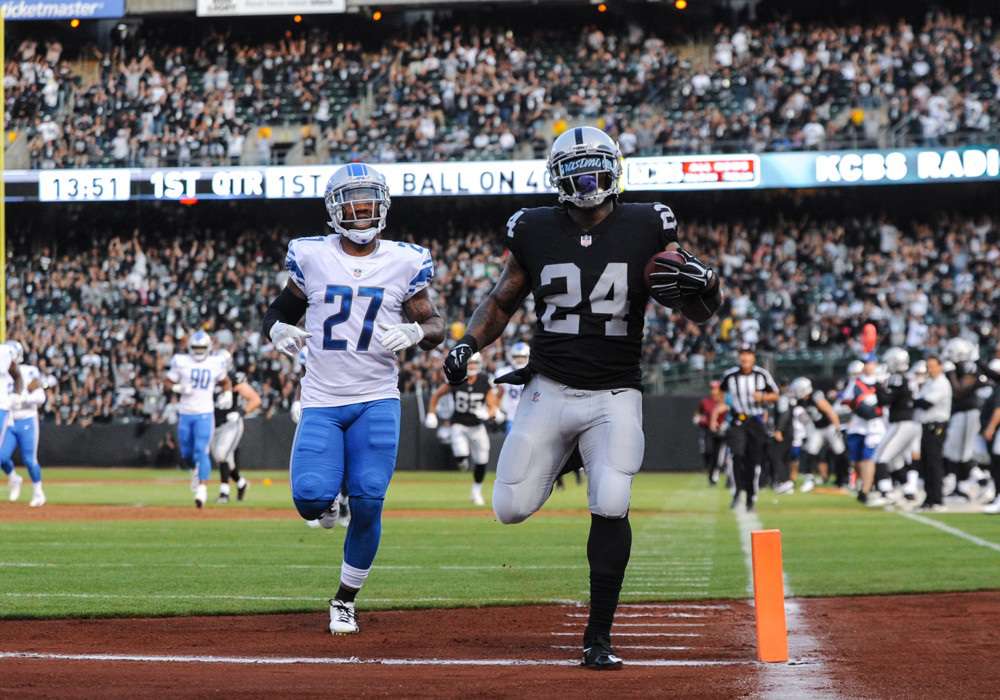 Let the preseason overreactions commence! Week 1 of the preseason (aka overreaction weekend) is in the books. Looking at the current ADP on Fantasyfootballcalculator.com, it is quite clear that everyone who flashed in the first exhibition game has moved up.

Seriously. That is how it is in the preseason, and we are just getting started. Let’s try and temper those expectations and project real outcomes based on preseason overreactions in this week’s edition of Fantasy Stock Watch.

Kerryon Johnson has the makeup of a three-down back in the NFL. His burst score, which takes into account a players vertical and broad jump at the NFL combine, is in the 93rd percentile. This means that Johnson is an explosive back at 6,0”, 203-pounds.

Johnson’s 40-yard dash was unimpressive at the NFL combine at 4.57, but try telling opposing defenders the former Auburn Tiger is not fast. Try telling the Raiders defenders on this play the same thing.

In his Junior year, Johnson had 285 carries for 1,385 yards and 18 touchdowns and was every bit of a three-down running back. However, the Lion’s backfield is a crowded one. LeGarrette Blount looks to be listed as the starter on the depth chart while Theo Riddick will see a lot of third-down work.

Johnson played into the fourth quarter in Week 1 and showed off his reliability in the screen game. I believe that by season’s end, Johnson will lead the Lion’s backfield in total touches. However, his draft cost is sneaking into the fifth round. He is going ahead of guys like Marshawn Lynch, Jamaal Williams, and Marlon Mack who appear to have a clearer path to the majority of touches.

I love Johnson’s talent but will be drafting him based on roster construction. Opportunity overrides talent in Fantasy Football, especially at the running back position. If I have a few high-volume running backs on my team, I will draft Johnson because his ceiling is high. But, the week-to-week production will not be consistent enough to figure out which games he will produce RB2 numbers.

Marshawn can still outrun a defense and he made that very clear on Saturday against the Lions. Unfortunately, like the Kerryon Johnson run, it was called back due to penalty. Lynch broke a 60-yard run for a would-be touchdown and showed speed that we have not seen from the 32-year-old in quite some time.

This run was called back…

In Frank Gore’s age-32 season, he surpassed 1,000 rushing yards and was the RB12 in Fantasy Football. Lynch has more speed and power than Gore did then, and the preseason overreactions of Lynch’s big run are under the radar because the play was called back. Beast Mode can still be bought low and can be the third or fourth running back on your team.

Lynch will be able to accumulate another season of 200-plus carries in 2018. With the Raider’s offense seemingly more spread out and full of deep-play wide receivers like Amari Cooper and Martavis Bryant, Lynch will have more opportunity for chunk plays.

Draft Lynch with confidence as the volume will be there. He will be the primary red-zone option and has eight-10 touchdown upside in Jon Gruden’s offense.

Talk about preseason overreactions, Smith-Schuster has moved up six spots since Friday when he caught a 71-yard touchdown. The play showed off his breakaway speed and his ability to go up and grab a jump ball.

Get mossed! JuJu Smith-Schuster with a 71-yard touchdown against the Philadelphia Eagles! pic.twitter.com/r3pKsFQmOZ

Juju will play mainly out of the slot this season on the high-powered Steelers offense. He will be an asset to any Fantasy team even though he will be the third option after Antonio Brown and Le’Veon Bell. The question comes down to his draft price.

I project Smith-Schuster as a low-end WR2 and that is what he is currently being drafted as. He is my WR20 and is being drafted as the WR18. If he continues to move up draft boards, which I think he will, he will start to go around players that will be of better value. Doug Baldwin is currently going off the board at 3.08 – if Juju shoots up more and Baldwin drops, the choice to me is obvious (health pending).

Juju’s 15.8 yards per reception were tied for 10th in the league with Tyreek Hill. Smith-Schuster is a big-play guy and certainly is a “boom” play. Draft him with confidence but be aware of his ADP. He is beginning to enter dangerous territory around potential Top 12 wideouts.

Peyton Barber is going to move up draft boards very quickly in the next few weeks. He has officially been named the starter for the Buccaneers. Head Coach Dirk Koetter announced this on Monday but was also quick to address that rookie running back Ronald Jones will be used often.

It looks as though the two will split carries this season. If that is the case, the obvious choice for me is to draft Barber late as opposed to using a fifth-round pick on Jones. If Barber moves up a couple rounds it will be one of the more justified preseason overreactions following Barber’s red-zone touchdown against the Dolphins this past weekend.

Last season when given the opportunity, Barber played well. In Week 13 against the Packers, Barber had 23 carries for 103 yards. He finished the season with four straight games of at least 12 carries and 51 yards.

The Buccaneers running backs have been valuable Fantasy assets in recent years and Barber is a guy who can be plugged into lineups and will not cost much. The third-year pro has pass-catching skills that can keep him on the field and has shown a knack for the end zone with limited touches.