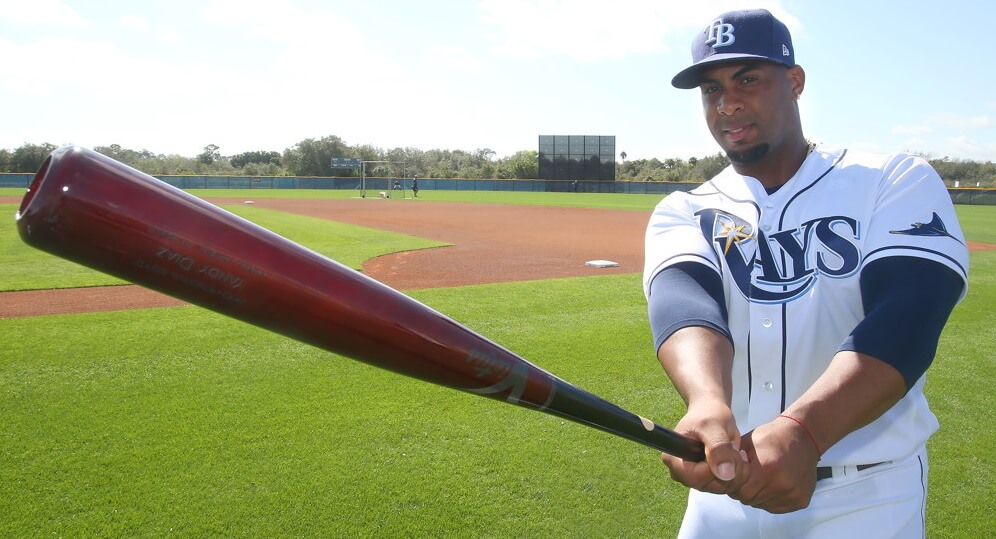 In preparation for the fantasy baseball season, I’ve been looking at some trends around the league. One of those was my The Floor is Lava piece, in which I looked at players who have decreased their ground ball rates in each of the last three seasons. Many times when we see a hitter break out, we look at their profile and see that they started hitting more fly balls. “They raised their launch angle” is something you hear all the time after a hitter puts up big power numbers. So, what I want to do is take a look at which hitters would benefit most from a launch angle change and maybe get ahead of some of this year’s power breakouts. How can we do that? Let’s take a look.

First, a little reminder of why we want to see fewer ground balls.

As you can see, good things happen when the ball goes in the air. There’s a reason why more and more players are buying into the fly-ball revolution. In fact, the ground ball rate across the league has dropped in each of the last three seasons. According to Fangraphs, in 2017, the league average ground ball rate was 44.2%. This dropped to 43.2% in 2018 and then 42.9% in 2019.

To see who would benefit from raising their launch angle, I looked into exit velocity and xwoba on line drives and fly balls and how they relate to barrel percentage. Barrel rate is one of the best indicators we have of how well a player is hitting the ball. A barreled ball is one that travels at an exit velocity of at least 98mph and hit at a launch angle between 26-30 degrees. These are the optimal conditions that lead to more home runs.

A lot of times, we look at a player’s Statcast page and see their average exit velocity and take that for face value. The thing is, it doesn’t tell the whole story. If a player is hitting too many ground balls, it’s going to drag that average velocity down. Looking at how hard they hit the ball when they do hit it in the air can give us a better sense of their true power potential. Alex Chamberlain of Rotographs recently wrote an article exploring how some metrics relate to each other and how well they carry over year-to-year. In that piece, he found that exit velocity on line drives and fly balls tends to remain consistent the following year.

I found that average exit velocity on line drives and fly balls had a strong correlation to barrel rate among all 320 hitters with at least 250 plate appearances. 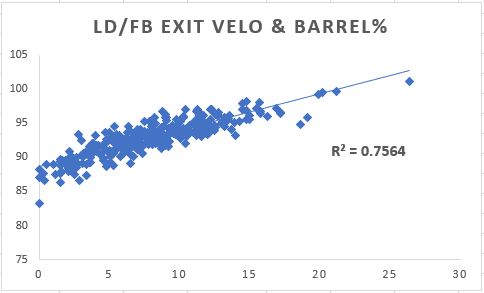 In that same group, xwoba on line drives and fly balls had an even stronger correlation to barrel rate. 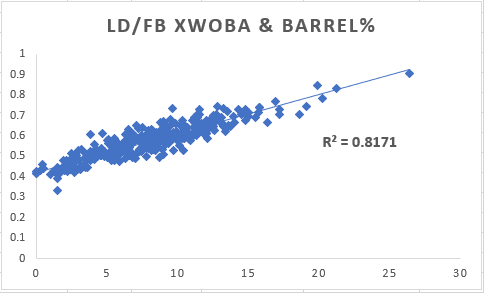 Although, it doesn’t carry over as well due to plate discipline that factors into the metric. What xwoba does is takes the xwoba on contact (xwobacon), which is a measure of quality of contact using exit velocity and launch angle, and adds in strikeouts and walks. By using xwoba on line drives and fly balls, we can get a better sense of how well a hitter hit the ball when they elevated it.

So now we can see who, among hitters that hit too many ground balls, stand to benefit most from raising their launch angle. The following table shows the top 30 players with at least 250 plate appearances that had the highest exit velocity on fly balls and line drives but hit ground balls at a 45% rate or higher. If these players can reduce their ground ball rates, we’re sure to see a boost in their barrel percentage. Let’s see what we’ve got here.

Favorite Picks To Break Out and More Observations

Shohei Ohtani did break out with 22 home runs in 367 plate appearances with a 16% barrel rate during his 2018 rookie season. His ground ball rate went up by 6% in 2019, which dropped his barrel rate down to 12.2%, and he didn’t quite put up the same power numbers with 18 home runs in 425 plate appearances. But Ohtani can hit the ball with the best of them. If he can get back to the same swing he had in 2018, he’s going to be an absolute force even with limited time in the lineup. He’s got a first-round caliber bat and speed to steal some bases. A full season of Ohanti hitting would be phenomenal.

This one left the bat at 114mph👇🏼 pic.twitter.com/qgFw7IxvcC

You know, Yandy Diaz has actually raised his launch angle each of the last two years. The thing is, he had an average launch angle of zero that first year in 2017! Now it’s up to 5.7 degrees. Hey, it’s progress. He did see a barrel rate jump of 6% last season that led to 14 home runs in 347 plate appearances. If he can continue this trend, even as slowly as it’s going, Yandy could be one of the year’s biggest power breakouts and be a steal with first base eligibility.

Yeah, Eloy Jimenez could break out and go full beast mode on us this year. He hit 31 home runs last season in only 122 games despite a 47.6% ground ball rate and 12.8% barrel rate. Jimenez cut his strikeout rate in the second half and hit .292 with 15 home runs after the All-Star break. He’s going over 30 picks after Yordan Alvarez, according to Fantrax ADP, and could absolutely be just as good or better.

As a late flier at the catcher position, you can do a lot worse than a .262 average and 18 home runs. That was Jorge Alfaro last season, and he’s clearly got room to improve on that. His average exit velocity went down last season, but his barrel rate went up. Why is that? Well, he hit more ground balls, but his average exit velocity on line drives and fly balls actually increased from 94.5mph to 96.4mph.

Fernando Tatis Jr. is going to be hitting lasers all over Petco Park for years, and I’m here for it. He had the same ground ball rate as Eloy Jimenez but had a higher barrel percentage. So he was pretty damn efficient when he hit it in the air.

Ryan McMahon, what are you doing? You’re in Coors, lift the ball! McMahon is actually one of my second base sleepers. And given how the roster looks right now, I’m taking him over Garrett Hampson. There’s a ton of potential there at a position lacking some depth.

Ryan Braun continues to provide value when he’s in the lineup. Last season, only 19 players hit at least .280 with 20 home runs and 10 steals. Seventeen of those players are going inside the top 130 in NFBC drafts. The other two? Ryan Braun and Avisail Garcia.

Speaking of Garcia, he’s supposed to split time with Braun in the right field while also playing some games in center field. He’s another player who’s been trending the right way in his batted ball profile. I’m trying to come out of a lot of drafts with Garcia as I can’t wait to see what he can do in Miller Park. Could we get a full-on breakout for Avi?

Consistently hits the ball well when he does get it in the air. Miller park #5 in woba-xwoba on LD/FB from 17’-19’

I want all the Avi

Tommy Pham has played in St. Louis and Tampa Bay, two home parks where hitters have underperformed their xwoba on line drives and fly balls over the last three years. While San Diego isn’t exactly a hitter’s park, it’s played mostly neutral in recent years. We could see a 25 home run and 20 steal season from Pham this year with excellent on-base skills. He’s a great value in drafts right now.

If you were skeptical about what D.J. LeMahieu did last season, don’t be. He hits the ball hard and is in a favorable park, in a great lineup.

Oh yeah, everyone’s favorite Statcast darling right now, J.D. Davis. I’ve got some concerns about the batting average regressing, but if he gets playing time, there’s no doubt he can be a 30 home run threat.

Willson Contreras is another one of those guys that seem to outperform his expected metrics. This actually makes me feel better about his capabilities. His xwoba and exit velocity on balls in the air show he can make some quality contact. On ground balls, Contreras’ exit velocity sat at 83.9mph. But on line-drives and fly balls, it’s up at 94.8mph. So don’t let the blue indicator on his Statcast page next to his average exit velocity fool you.

Are you predicting any huge power breakouts for 2020? Leave some names in the comments below. You can’t say I told you so if you didn’t.