When we’re analyzing hitters, one of the things we look at is their batted ball profile. The fly-ball revolution and age of analytics have taught us that when you hit the ball in the air, good things tend to happen. We like to see players making an effort to hit fewer ground balls. So, I set out to find trends around the league of players reducing their ground ball rates.

Well, if they aren’t hitting ground balls, they have to be line drives or fly balls, right? And that’s what we want. Line drives lend themselves to a higher batting average while more fly balls mean more home runs. The chart below shows league-average statistics for each batted ball type in 2019.

As you can see, players generally perform significantly better on fly balls and line drives as opposed to ground balls. Unless the hitter has blazing speed, it looks like ground balls suppress batting average and slugging. Thus, the floor is lava!

When looking for these trends, I only took players who’ve reduced their ground ball rates in each of the last three seasons. Why? Well, if a player fluctuates going up and down, is it really a trend? Maybe it’s just a hitter changing his approach. If I’m trying to predict what a player is going to do, I want reliable information. So, going back three seasons as opposed to two gives me more reliable data. I also made sure that every player had at least 300 plate appearances in each season to have a dependable sample size.

Nearly every player in this article had an increase in their launch angle in each of the last three years. This further validates the trends we’re seeing and shows that these players are making a conscious effort to lift the ball.

Ok, I know what you’re thinking, “Just tell me who’s going to hit more home runs next year dangit!”. Let’s get to it.

The more I look into Dansby Swanson, the more I like him as a sleeper for 2020 fantasy baseball. Swanson had gotten off to a terrific start before injuring his heel on July 23. Before the injury, he was hitting .263 with 17 home runs and seven steals. This put him on a 27 home run and 11 steal pace. Not only did he lower his ground ball rate, he more than doubled his barrel percentage from 4.1% to 10.1% and saw a three mile-per-hour increase in exit velocity.

Yasiel Puig has always been quite the enigma, hasn’t he? Here he is with three seasons of increased fly balls. Puig also reduced his infield fly ball rate by 4.7% over 2018. Yet, he only hit 23 home runs in 611 plate appearances. Puig saw his lowest HR/FB% since 2016 at 13.9%, down from 20% over the previous two seasons. His exit velocity and barrel% look right in line with his career norm as well. Maybe he got a bit unlucky in the power department. His plate discipline has been concerning, but he’s without a doubt a threat for 25 home runs and close to 20 steals. Check out his batting average over the last four seasons. They go .263, .263, .267, .267, so this season we can lock him in for .271 right?

Polanco came through with a decent season posting a .295/.356/.485 slash line, 22 home runs, and four steals. What I like about this profile is the line drive rate at just over 26% in each of the last two years. Polanco makes a lot of contact with a Z-Contact rate of 90.7%, about six percent above league-average. The rise in launch angle helped him gain over three miles per hour in average exit velocity from 83.9mph to 87mph. Although, he did need over 700 plate appearances to achieve 22 home runs. It’s hard to predict that many plate appearances again, but that lineup is looking so good. It might just turn over enough for him to reach that mark with him hitting near the top of the order.

Now, this is one I really like. Last season, Avisail Garcia was one of only 18 hitters to hit at least 20 home runs, steal 10 bases, and hit .282 or better. Sixteen of the 18 hitters are being drafted inside the top 120. Garcia is going at pick 283 according to Fantrax ADP. The move to Milwaukee could help him tremendously. Take a look at his 2019 spray chart over Miller Park. 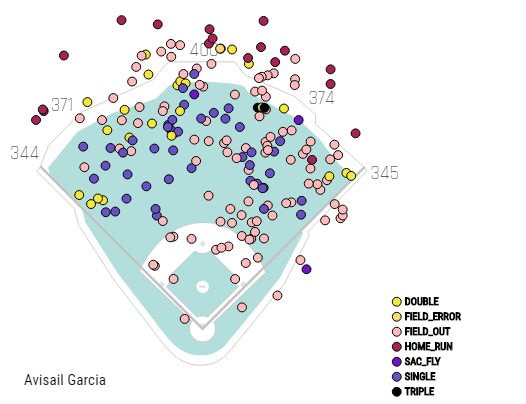 Well, this makes me feel a little better about where Villar is going. I didn’t initially like the move to Miami. But, they’ve moved the fences in and added some quality bats to the lineup. Villar had a career-high barrel rate of 6.8%. His barrel rate was 6.6% in 2016 when he hit 19 home runs in Miller Park. Perhaps 15-20 home runs isn’t out of the question with the ability to steal upwards of 40 bases again.

It’s nice to see Josh Bell on this list considering how up and down his young career has been so far. He had a 2019 season of two entirely different halves. I mostly buy into the breakout he saw in the first half as I laid out in my Buying Into Six Breakout Hitters article. Barrel%, exit velocity, xBA, and xSLG, were all career bests for Bell that correspond with his trend of reducing ground balls. I have him as a top-five first baseman because I believe he’s becoming a complete hitter at this stage of his career. I’ll take a shot on him ahead of an aging Paul Goldschmidt, Anthony Rizzo, Jose Abreu, and even Matt Olson. I understand the hype with Olson right now, but he doesn’t have the plate discipline or contact ability Bell does.

Hey, here’s Starlin Castro again. He showed up in my Plate Discipline Trends article. With two positive trends in the right direction over the last three years, Castro is quickly becoming one of my favorite sleepers. He’s improving his contact rate while also lifting the ball more. It’s no coincidence that he hit a career-high 22 home runs last season.

I just can’t quit Carlos Correa. We know why he’s fallen in drafts, he can’t stay healthy. But the potential value is enormous. Correa hit 21 home runs in only 321 plate appearances. And again, a career-high barrel rate of 13.5% coincides with a career-high launch angle of 12.4 degrees. His xBA of .290 indicated he might have room to improve on that .279 average. He’s making gains in his fly ball rate while keeping the ability to hit for a good batting average. If this is the year he plays a full season, Correa is going to win folks some leagues.

Yuli Gurriel had a career year with 31 home runs. He went berserk in July with 12 home runs and a .408 average. A career year at the age of 35 is hard to repeat, but as someone who has always hit for a good average its nice to see him lift the ball more. With a 45% pull rate, it’s clear that right-handed hitters in the Astros lineup are aiming for the Crawford Boxes. We see the same tendency from Alex Bregman as well. So while Gurriel’s barrel rate might be low, it works in that park. I wouldn’t expect the same power output, but 20 home runs and a good average is reasonable.

Speaking of Bregman, here he is on this list as well. What do you know? Our third Astro. Like Gurriel, he’s got excellent plate discipline and pulls balls into the left-field boxes. It’s fair to question how much of it is legit considering recent news. Cheating scandals aside, Bregman did overperform quite a bit. Despite raising his launch angle, his barrel rate dipped by 2.2% and his SLG of .592 was drastically higher than his xSLG of .471.

Xander Bogaerts is a stud. His 52 doubles trailed only Rafael Devers and Nicholas Castellanos in all of baseball. One of the best shortstops out there in one of the best lineups, there’s not much else to say about Bogaerts. We can see in his chart that the reduced ground balls have turned directly into fly balls. I don’t see a reason not to buy into a 30 home run and .300 average hitter with a boatload of counting stats. Even as a third-round pick, he’s still capable of providing value.

Another guy who just can’t seem to shake the injury bug every season. Willson Contreras was on quite a pace with 24 home runs while batting .272 in 409 plate appearances. While his average exit velocity is nothing to write home about, he increased his barrel rate to 11.5%, up from 7.3% in 2018. It’s great to see this trend for the young All-Star catcher. Although a 50.2% ground ball rate is still more than we’d like to see.

In 2018, Trea Turner played 162 games and hit 19 home runs. He hit the same number of home runs last season in only 122 games. We’ve seen the reduced number of ground balls manifest into more line drives. The benefit shows in his .298 batting average. He can hit 20 home runs while stealing over 40 bases and hitting close to .300. If you had any doubt of taking Turner in the first round, don’t.

This one is no surprise. This trend for Yelich started when he got to Milwaukee from Miami, and it’s earned him an NL MVP award in 2018. But, it was last season where we really saw him take a leap in his fly-ball rate. With such a complete game, Yelich has as strong a case as anyone to be the best player in fantasy this season.

Dear Baseball Gods, please give us a full, healthy season of Mike Trout so he can hit 60 dongs. This is all I want. Thank you.