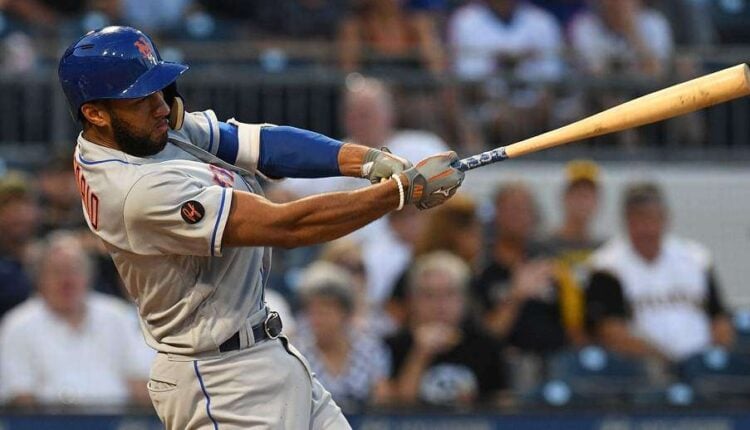 When taking a look at what helps a player grow as a hitter and break out, contact rate and plate discipline are common factors. In my Buying Into Six Breakout Hitters article, I noticed a common trend with guys like Marcus Semien and Tim Anderson. Their contact rates had been on the rise over the previous two seasons. So, I started looking into some trends throughout the league. In this article, we’re going to look at the importance of contact rate and plate discipline and identify some players trending in the right direction.

First, let’s get some basics out of the way. Which metrics am I looking at in this article, and why?

Why O-Swing? Because this is one of the better indicators of patience at the plate. The less someone is chasing bad pitches outside of the zone, the more balls will be called in their favor, leading to more walks. In the chart below, I’ve plotted the relationship between O-Swing% and BB% among 135 qualified hitters via Fangraphs. As you can see, there’s a strong correlation between chase rate and walk rate with an R-squared value of 0.65. The closer that value is to 1.00, the stronger the relationship is. 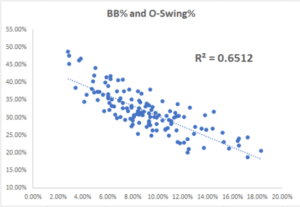 Now, what about Z-Swing? This one is simple. We want hitters to swing at pitches inside the zone. It may be obvious to say, but the best contact is made inside the strike zone. We want z-swing% to be high.

Why not swing%? While a total swing percentage could tell us how aggressive a hitter is, breaking it down by O-Swing and Z-Swing gives us much more context. Now on to contact rate.

O-Contact generally leads to weak contact and suboptimal results, as I mentioned above. One good thing we can take from O-Contact is that if someone is going to be aggressive and chase pitches outside the zone, at least making contact can prevent strikeouts. The graph below shows the correlation between O-Contact and K%. Players with a high O-Contact can fight off pitches and extend at-bats. 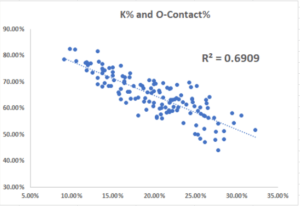 Now Z-Contact is where it’s at. This is what we want to see the most. Put balls in play from inside the strike zone, and better results will come.

When we combine both contact numbers for one overall rate, we can make the best correlation to K%. This last graph shows the best relationship yet with an r-squared of 0.79. It makes sense. The more contact a hitter makes, the less likely he is to strike out. 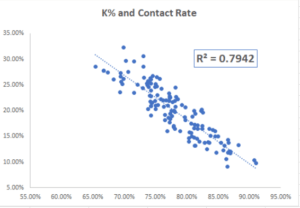 You’ll see other metrics when you visit Fangraphs, such as Zone%. This tells us how often a pitcher is throwing to a hitter inside the strike zone. This doesn’t have much predictive value. It only tells us how pitchers are attacking hitters. Advances in contact and swing rates can influence Zone%. The same goes for SwStr%, or swinging strike rate. A change in contact rate is going to affect SwStr%. We generally want this number to be lower, as it’ll also lead to fewer strikeouts.

For reference, the chart below shows the league-average numbers for contact and plate discipline metrics.

We’ve now got a clearer picture of what we’re searching for, so let’s take a look at some players.

Amed Rosario is one of my favorite breakout picks for this season. As you can see, he’s shown incredible growth with three consecutive seasons of improvement across the board. Rosario is chasing fewer pitches, recognizing better pitches in the zone, and making better contact on those pitches. When we take a look at the quality of contact trends, things look even better. Rosario has improved his barrel rate each of the last three seasons, as well as his average exit velocity. He still hits too many balls into the ground with only a 29.3% fly-ball rate. But if he can get continue to trend the right way with his launch angle, which raised by 1.6 degrees from 2018 to 2019, I can see a 20/20 season with a .290-.300 average for Rosario.

I’ve been a big fan of Willie Calhoun. I hope this is the season we see him get full playing time. While he’s been limited in plate appearances, he made some strides in 2019 with a 15.7% strikeout rate and a 6.8% walk rate. His contact numbers are all well above league-average. So, his strikeout rate should remain low. Calhoun is still chasing too many bad pitches outside the strike zone, suppressing his walk rate. But everything seems to be trending in the right direction. Twenty-one home runs in 83 games shows what he’s capable of. Right now, he’s slated to start in left field. A free-agent acquisition could move Danny Santana or Joey Gallo to first base, so I think Calhoun is safe. He’s one I’m buying into a lot this season.

Jesus Aguilar was someone being drafted inside the top 100 just a year ago. Now, he’s being taken as the 34th first baseman off the board at pick 463, according to Fantrax ADP. Aguilar is a decent bounce-back candidate hitting in the heart of the Marlins order. That lineup suddenly looks much better than it did last season with additions of Jonathan Villar and Corey Dickerson. While 2019 was a lost season, Aguilar has made gains in his strikeout, walk, and contact rates in each of the last two seasons. He might be worth a late flier as a corner infielder in 15 team leagues.

I liked Willy Adames a lot when he first came up from the minor leagues as one of the Rays’ top prospects. He’s gotten plenty of run since his call-up as his defense keeps him safe from platoons. Adames and Austin Meadows are probably the only Rays I trust to play every day. While we see that his swing rates have remained the same over the last two seasons, his Z-Contact% has increased. Perhaps another dip in K% could be coming. Aside from his plate discipline, Adames batted ball data shows some encouraging signs as well, with a decrease in ground ball rate by 5.3% to 46.8%. Adames would benefit considerably by a further drop in ground ball rate. He had an average exit velocity of 83 mph on ground balls, but 93.1 mph on fly balls and line drives.

I know how bad Lewis Brinson has been. We’ve all got fatigue waiting on him. But let’s be honest, who else are the Marlins going to run out there in center field come Opening Day. Brinson should start the season with the job and has actually made decent improvements to his contact rate. This is likely a make-or-break season for Brinson in the majors going into his age 26 season. I wouldn’t rule out Brinson putting things together at the MLB, however unlikely we may think it is. He did hit 16 home runs and stole 16 bases in 81 games at Triple-A last year.

One of those “you may have missed it” statistics, Starlin Castro hit .302 with 16 home runs in the second half last season. Now, he’s moved from Miami to Washington, a drastic improvement in team context. Castro chases too many pitches to see a drastic improvement to his walk rate. But his contact rate has been on the rise, and his strikeout rate is coming down with it. Carter Kieboom will compete for the third base job while Howie Kendrick and Eric Thames handle first base. Castro should be able to handle second base all season for the Nationals. With a Fantrax ADP of 278.49, he could be a valuable second base bargain considering the lack of good depth at the position.

Ok, so this one is just for fun. We know how good Cody Bellinger is. Could he be even better?! When taking a look at hitters that have improved contact and discipline metrics over the last three seasons, Bellinger was right up there. Only Alex Bregman*, Mike Trout, Anthony Rendon, Mookie Betts, and Carlos Santana posted better BB/K ratios. If you had any hesitation with Bellinger as a top-five pick, don’t.

I absolutely love the move for Moustakas to Cincinnati. I really don’t think he’s going to be much different than teammate Eugenio Suarez, who’s going 68 picks ahead of him. That being said, there are a couple of things that stand out when looking at these trends. First, Moustakas has improved his O-Swing% each of the last three seasons, and his walk rate with it. Moustakas with OBP gains? Yes, please! But his contact rate has slowly been declining as well over the last three years, and of course, his K% is slowly rising. We see plenty of this with aging hitters, so it should be something to keep an eye on. I don’t think it’s something to be worried about for 2020 as the ballpark should mask some early contact decline.

Joey Gallo strikes out a ton. That isn’t going to change about his plate discipline. But, this is one instance where it’s better to look at someone’s Z-Contact rather than overall contact. Gallo has improved that metric over the last three seasons. That’s scary. And look at that great dip in O-Swing coinciding with a 17.5% BB rate. If you’re in an OBP league, Gallo could be a second-round value with a Fantrax ADP of 80.62.