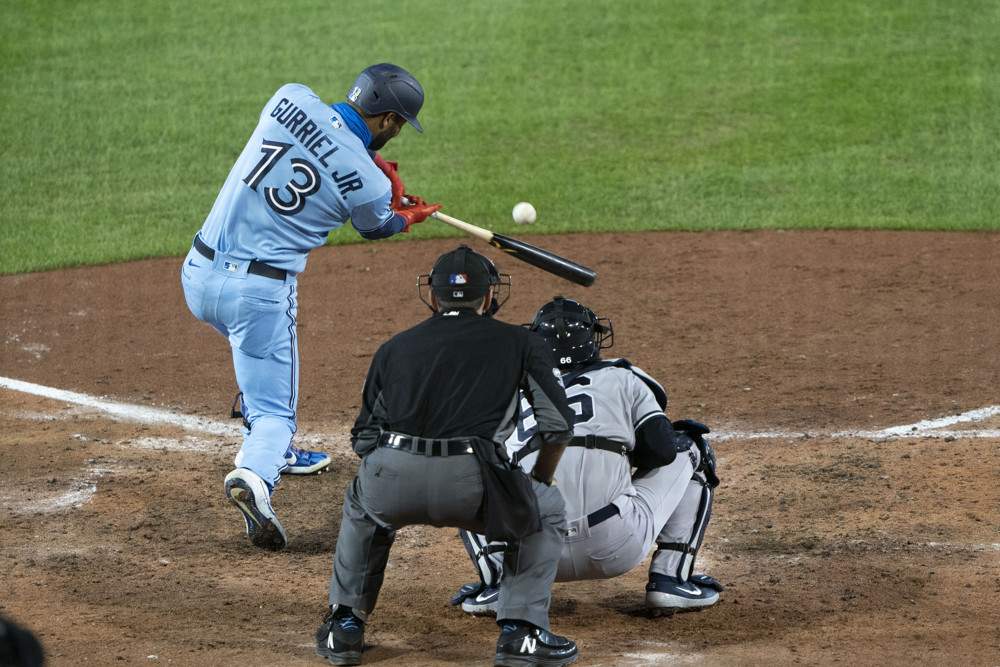 Over the last few years, I’ve had the chance to spend a lot of time at Northeast Delta Dental stadium in Manchester, New Hampshire. This fine looking ball park serves as the home for the Toronto Blue Jays Double-A affiliate in the Eastern League, the New Hampshire Fisher Cats. Why am I telling you this? Well, over the last few seasons as I got into the scouting/prospect analysis side of things in addition to being a fantasy baseball writer, I’ve seen a plethora of high-end offensive talent roll through town, including Lourdes Gurriel Jr, who will be the focus of this article.

While the names Bo Bichette, Cavan Biggio, and Vladimir Guerrero Jr carry more weight due to being 2nd generation stars with higher prospect pedigrees, Gurriel has had the best offensive career to date, far outproducing the former uber-prospect Vlad Jr. I’ve already written about the other three ad nauseum in their prospect, so now it’s time to dive into Mr. Gurriel, Toronto’s emerging star outfielder.

According to Razzball’s player rater, Gurriel finished 2020 as the 39th best hitter and 50th best player overall. As you’ll see below, his profile backs up that finish, and his 2021 ADP makes him one of my favorite values in first 10 rounds.

When I began digging into Lourdes Gurriel, several areas impressed me, but one, more than others, stood out. In both 2019 and 2020, Gurriel recorded an average above .259, an xBA above .243, and an xSLG above .451 against all three pitch types. You don’t usually see this too often from non-elite hitters.

Looking at strictly 2020, Gurriel hit .356 against breaking balls and .333 against offspeed offerings with an xSLG above .500 and wOBA above .400 against both pitch types. He might not have the most advanced approach in the world or walk at a higher clip, but Gurriel’s ability to handle all three pitch types gives him a higher AVG floor moving forward, even with a middle of the road 75.6% contact rate.

Speaking of those contact skills, none of them stand out. But on the other hand, none are concerning either outside of a 35.6% O-Swing rate that ranked 30th highest among 142 qualified hitters in 2020. But even there, Gurriel has improved his O-Swing rate each season and also improved all of his contact metrics between 4.6% and 6.5% from 2019 to 2020 while dropping his SwStr rate by 3.2%. With Gurriel’s well above-average exit velocity and hard-hit rates, even average contact and swing metrics can lead to a batting average that pushes .300

The power department has been the area where Lourdes Gurriel has really stood out throughout his career. Gurriel is every bit of his 6’4/215 list height/weight and then some. While attending one of my many New Hampshire Fisher Cats games in 2018, I was sitting in the front row in the seat closest to the New Hampshire batter’s box when Gurriel stepped into it. In that moment, he looked like freaking Frank Thomas or Jim Thome. Simply put, Gurriel is jacked. It might’ve taken him a bit to translate all his easy plus raw power into game power, but once it clicked, Gurriel really took off. 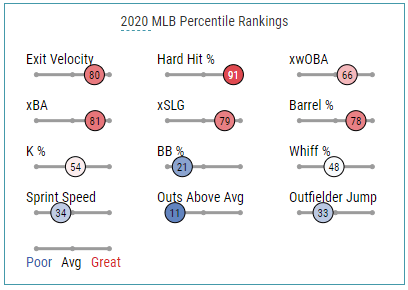 With any player, I try to find areas to throw cold water on to keep expectations in check. With Gurriel, it’s hard to do. If you pitch Gurriel over the middle or inside part of the plate, he’s gonna mash. That’s a common occurrence in all of his zone profiles below. You could maybe say he struggles with pitches on the outside corner, but even belt high on the outer half is mostly in red below. For Gurriel, as long as he doesn’t regress with his O-Swing rate, he should be fine as he mashes most everything inside the strike zone. 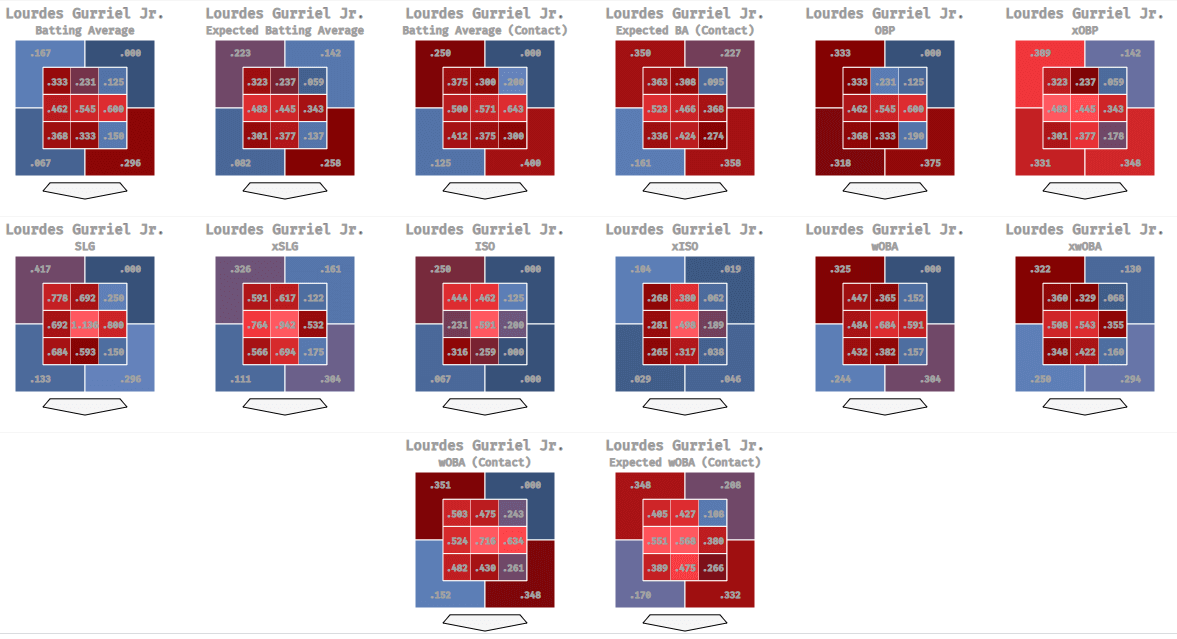 Favorable is putting it lightly. The once light-hitting Blue Jays have turned into one of the top-10 offenses in baseball, finishing 7th in runs, 8th in home runs, 9th in slugging, and 12th in wOBA during the 2020 season. Lourdes Gurriel was a big reason for all of that. Now, heading into 2021 he’s projected to hit third, right behind Biggio and Bichette, and right in front of Hernandez and Guerrero Jr.

That’s one of the better 1-5’s that you’ll find in baseball today and Gurriel gets to hit smack dab in the middle of it. Rowdy Tellez and Randal Grichuk aren’t slouches either. Hitting in the spot Gurriel is projected to be in is a massive boon to his fantasy value and could have him pushing the 200 R+RBI mark in 2020.

The point of this article wasn’t necessarily to open everyone’s eyes to Lourdes Gurriel. It also wasn’t to say that Gurriel is going to be a superstar and early-round fantasy stud. No, I wrote this to show that he can provide fantasy value significantly above his 2021 ADPs and possibly outperform two of his more heralded teammates. As of now, Gurriel’s ADPs on Fantrax and NFBC both sit around pick 100 overall.

While everyone is going after Teoscar Hernandez and Vladimir Guerrero Jr in the 50-70 range, why not wait a few rounds and get similar production and a better chance at getting a solid ROI? Sure, Hernandez and Vladdy might have a higher fantasy ceiling, but I’d argue that their floors are lower than Gurriel’s in 2021, especially if Guerrero keeps driving everything into the ground. If the price tags were all similar, my thinking might be different. But as it stands now, Gurriel’s ADP is around 30-35 picks lower, which makes him a much better value pick for 2021.

Bold Prediction: Gurriel finishes as the 2nd most valuable Toronto hitter on Razzball’s player rater behind only Bo Bichette.

Long-term, the outlook for Lourdes Gurriel is just as bright. He’s going to be playing the entire 2021 season at age 27 and should be providing peak production for the next several seasons. This Blue Jays lineup is just going to get better around him as guys like Austin Martin, Jordan Groshans, and Orelvis Martinez will be joining the fold in the next couple of seasons along with Alejandro Kirk who debuted late in 2020. There’s also plenty of rumors swirling right now about Toronto trying to acquire a big bat like George Springer, DJ LeMahieu, or possibly even J.T. Realmuto.

It looks like Gurriel is going to have a great lineup around him moving forward one way or another and he doesn’t hit free agency until after the 2023 season. That means we get three more seasons of Gurriel in this lineup and maybe more if he resigns. He currently sits just inside my top-100 overall in my top-500 dynasty rankings and could realistically climb another 25+ spots in 2021 if he produces in the vicinity of my projection above. I’ve been trying to acquire him wherever I can in dynasty leagues as his price tag hasn’t quite caught up yet…. thankfully.