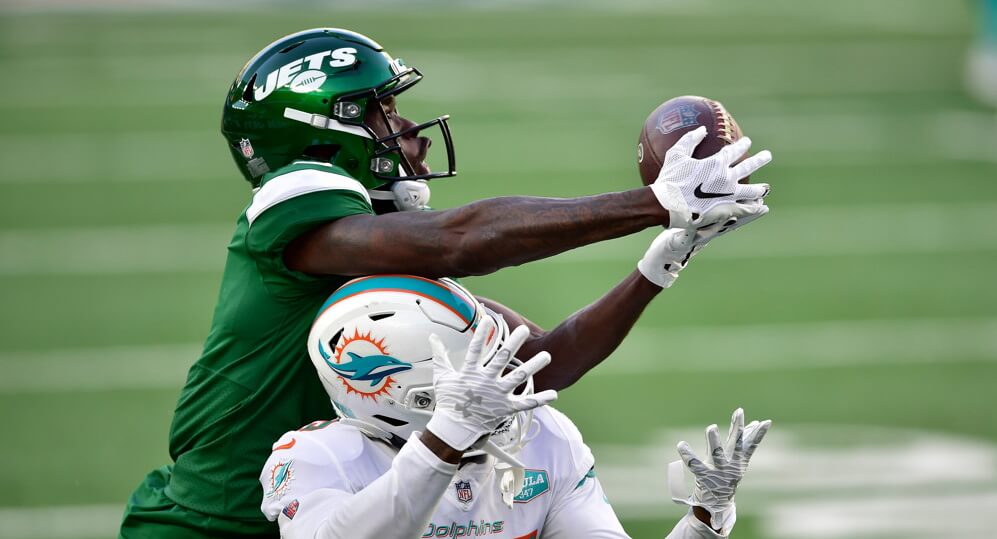 Veteran players headline the 2020 fantasy football Week 13 waiver wire, particularly at the quarterback and running back position. With only one week left in the fantasy football regular season, it’s time to make some final adds to help with the playoff push. Overall, Week 13 doesn’t provide us with the most exciting pickups, but that doesn’t mean we should overlook these players. In the 2020 fantasy football Week 13 waiver wire, we have several veteran contributors, including Ryan Fitzpatrick, Kirk Cousins, Wayne Gallman, and the ageless wonder Frank Gore. Let’s dive into the top pickups in Week 13.

After the Dolphins benched him, welcome back to Ryan Fitzpatrick as he completed 24 of 39 passes for 257 passing yards and two passing touchdowns. DeVante Parker also appreciated Fitzpatrick returning after feeding Parker with 14 targets. In Week 13, the Dolphins face the Bengals, and Fitzpatrick should perform as one of the top streaming options. Thus, Fitzpatrick ranks as the top quarterback to pick up in the 2020 fantasy football Week 13 waiver wire, assuming he holds the job for one more week.

Without Adam Thielen and Irv Smith on Sunday, Kirk Cousins logged back-to-back 300-yard games. On Sunday, he logged a season-high 45 pass attempts for 307 passing yards and three passing touchdowns. Next week, the Vikings face the Jaguars, who allow the 3rd most fantasy points to quarterbacks. Similar to Fitzpatrick, Cousins ranks as one of the top quarterback pickups to stream in Week 13.

Once again, Philip Rivers put up decent passing yardage with a pair of touchdowns. Against the Titans, he finished with 295 passing yards, two passing touchdowns, and one interception. The Colts face the Texans and Raiders over their next two games, and Rivers should provide streaming quarterback value.

In a real-life football sense, Mitchell Trubisky looked awful. However, Trubisky completed 26 of 46 pass attempts for 242 passing yards with three touchdowns and two interceptions. He also fumbled the ball three times and lost one of them, but somewhat made up for the errors with the three passing touchdowns. In the next two games, they play the Lions and Texans, who allow 4th and 7th fantasy points to the quarterback position. However, it’s a risky play to consider Trubisky unless it’s a Superflex league.

We only recommend Mike Glennon in Superflex leagues since every starting quarterback provides value. Against the Browns, Glennon totaled 235 passing yards and two passing touchdowns. They face the Vikings and Titans in the next two games, both of which rank 15th and 9th in fantasy points allowed to the position. Assuming Glennon holds the job, he’s worth considering in Superflex leagues.

Make sure Alexander Mattison isn’t hanging around on waivers after seeing Dalvin Cook leave the game with an ankle injury. Although Cook returned to the game, check if Mattison is available as he would rank as the top running back in the 2020 fantasy football Week 13 waiver wire.

Josh Jacobs suffered an ankle injury on Sunday, so make sure to pick up Devontae Booker in case Jacobs misses time. Although this backfield may end up more like the Falcons situation where Booker splits snaps and touches with another running back, he’s worth rostering in all leagues.

Back in Week 11, we recommended Wayne Gallman as a running back to pick up in the Week 11 waiver wire heading into their bye week. Gallman crushed his juicy matchup against the Bengals with 24 carries for 94 rushing yards and one rushing touchdown. He also caught three of five targets for negative three receiving yards. With Mattison likely rostered in more leagues, prioritize Gallman if available.

With Todd Gurley ruled out, Brian Hill and Ito Smith shared snaps and touches on Sunday. Hill finished with 13 rushes for 55 rushing yards and logged 39 snaps. Meanwhile, Smith played on 28 snaps with 12 carries for 65 rushing yards and one rushing touchdown, and also added four catches for ten receiving yards. Both Hill and Smith will likely continue to share touches and snaps with Gurley out. If Gurley is out once again, it’s tough to trust them against one of the better rushing defenses in the Saints.

Since the Jets placed La’Mical Perine on injured reserve, Frank Gore led the Jets backfield on Sunday. He finished with 18 carries for 74 rushing yards and caught all three targets for 12 receiving yards. As long as Gore continues receiving 18-20 touches per game, he’s worth adding, especially in non-PPR leagues.

Rookie Cam Akers exploded for a 61-yard carry and led the Rams running back trio with nine carries for 84 rushing yards and one touchdown. Darrell Henderson totaled ten carries for 19 rushing yards, and Malcolm Brown only logged three carries for four rushing yards. Since the 49ers allow the 26th most fantasy points to the running back position, it wasn’t surprising to see them struggle on the ground. However, monitor expectations because all three running backs continue to share snaps and touches. According to Pro Football Focus, Brown logged 25, Henderson logged 20, and Akers logged 17 snaps. Thus, Akers is more of a player to stash unless one of them suffers an injury.

With D’Andre Swift ruled out on Thanksgiving, Adrian Peterson and Kerryon Johnson led the backfield. Peterson recorded 15 carries for 55 rushing yards and two rushing touchdowns. Meanwhile, Johnson logged 11 carries for 46 rushing yards and caught all four targets for 52 receiving yards. If Swift misses another game, then Peterson and Johnson will share touches, with Johnson having the PPR upside.

Against the Vikings, Curtis Samuel caught all five of his targets for 72 receiving yards. We mentioned Samuel last week, and we bring him up once again, especially with D.J. Moore suffering a non-contact injury late in the game. Samuel already provides deep-league value in PPR leagues. However, more opportunities could head towards Samuel if Moore misses time, meaning prioritize Samuel in the 2020 fantasy football Week 13 waiver wire.

In the Week 12 waive wire, we recommended Denzel Mims, and he tied for the team-high with eight targets. Mims caught four of eight targets for 67 receiving yards. Meanwhile, his teammate Breshad Perriman caught four of eight targets but led the team with 79 receiving yards. With Sam Darnold at quarterback, he typically fed Jamison Crowder. However, in this game, Mims and Perriman earned the most targets. Although it might feel gross to trust a Jets player, they face the Raiders and Seahawks over the next two weeks. With that said, Mims and Perriman rank as deep-league pickups in the 2020 fantasy football Week 13 waiver wire. Don’t forget that Mims had an elite College Prospect Profile with a 42.3% College Dominator (85th percentile), 25.1% College Target Share (63rd percentile), 115.6 Speed Score (96th percentile), and 131.0. Burst Score (90th percentile).

In quite an unusual game for the Raiders, where the entire offense struggled, Hunter Renfrow led the team in targets and receiving yards. Renfrow caught seven of nine targets for 73 receiving yards. However, he totaled 11 targets in the previous four games. It’s hard to trust Renfrow, but he proved efficient when targeted. On the season, Renfrow ranks 9th with a +25.0 Production Premium and 8th with 10.9 yards per target. At this point, he’s more of a wide receiver to add and stash in deep leagues.

On Sunday, Trey Burton caught three of six targets for 42 receiving yards and one receiving touchdown. In back-to-back games, Burton caught a touchdown and totaled 11 targets, which means he’s back in the streaming conversation. Hopefully, Burton continues to receive 5-6 targets per game and thus ranks as the top tight end to pick up in Week 13.

Since the Vikings ruled out Adam Thielen and Irv Smith, Kyle Rudolph had himself a day. Rudolph caught seven of eight targets for 68 receiving yards. If Thielen and, or Smith continue to miss time, then Rudolph should provide stream-worthy value.