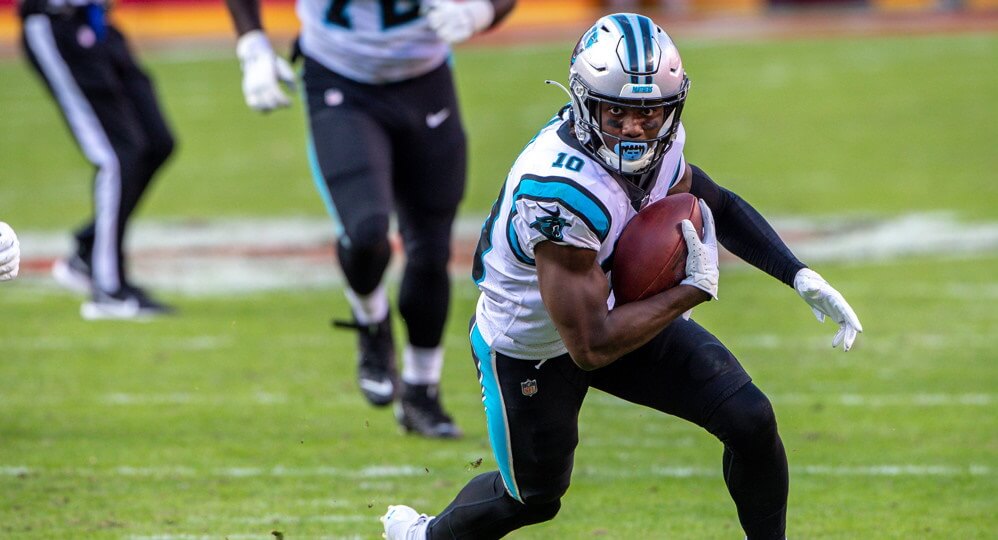 Unfortunately, in Week 11, Joe Burrow suffered a season-ending knee injury after a solid rookie campaign. On a positive note, Taysom Hill made the fantasy sports world explode while also racking up fantasy production. Several exciting young receivers showed up, and they end up here once again. Not too many exciting running backs outside of the check if available list. In the 2020 fantasy football Week 12 waiver wire, we bring you the top players at each position to add with reasons why.

Late last week, news broke that Taysom Hill would start for the Saints. With skepticism by some around whether Jameis Winston would play, including myself, Hill crushed in a juicy matchup against the Falcons. I referenced Hill as Tim Tebow light in the Week 11 update of the rest of season rankings.

Hill completed 18 of 23 passes for 233 passing yards and also logged ten carries for 51 rushing yards and two rushing touchdowns. With Brees on injured reserve, make sure Hill isn’t hanging around on waivers. If available, Hill ranks as the top quarterback to add in the 2020 fantasy football Week 12 waiver wire article.

Check to make sure Daniel Jones isn’t hanging around on waivers because he faces the Bengals, Seahawks, and Cardinals over their next three games. Those teams allow the 8th, 1st, and 4th most fantasy points to the quarterback position. Although it isn’t nice to watch, Daniel Jones should provide solid fantasy production over the next three weeks. If Taysom Hill isn’t available, then Jones ranks as one of the top quarterback pickups.

With Teddy Bridgewater limited at practice on Thursday, it looked like he potentially had a chance to play. However, XFL superstar P.J. Walker showed some flashes and the ability to keep some of their pass catchers afloat. Walker completed 24 of 34 passes for 258 passing yards, one passing touchdown, and two interceptions. He connected with D.J. Moore for a 52-yard catch and spread the ball around to Curtis Samuel and Robby Anderson. Walker is a name to monitor in Superflex leagues since any starting quarterback provides value.

Carlos Hyde missed a few games due to injuries but came back in Week 11 against the Cardinals. Hyde totaled 14 carries for 79 rushing yards and one rushing touchdown. He also caught a couple of passes for 16 receiving yards. It sounds like Chris Carson should return in Week 12, but it’s still worth adding Hyde in the 2020 fantasy football Week 12 waiver wire.

In shallow leagues, check on the availability of James White or Sony Michel. Rex Burkhead suffered a torn ACL injury, and it likely means more playing time for James White since Michel and Damien Harris overlap roles. On Sunday, White caught six of nine targets for 64 receiving yards. However, outside of Week 11, White hasn’t received much involvement at all. On the flip side, Michel looked explosive in his last game against the Raiders when he logged nine carries for 117 rushing yards. However, Michel looks more like a running back to stash in non-PPR leagues.

Since D’Andre Swift suffered a concussion that kept him out of Week 11, Adrian Peterson and Kerryon Johson led the Lions backfield. However, they barely produced any fantasy value. Peterson is the primary rusher, and Johnson receives a little work in the passing game. On Thanksgiving, the Lions play the Texans, who give up the 2nd most fantasy points to running backs. If Swift returns, then both these backs have minimal value but could provide deep-league flex value in Week 12.

Outside of one down week, Corey Davis continues to produce as a WR3 in PPR leagues. On the season, Davis holds a 23.5% target share (No. 15) and 30% air yards share (No. 28). Over the past four games, Davis logged 29 targets, 19 receptions, 230 receiving yards, and two touchdowns. That four-game stretch also included a zero catch game. On Sunday, Davis caught five of seven targets for 113 receiving yards against a tough Ravens defense. Make sure Corey Davis isn’t hanging around on the waiver wire. He ranks as the top wide receiver to pick up in the 2020 fantasy football Week 12 waiver wire.

In the waiver wire article last week, we mentioned Michael Pittman, and he showed up on Sunday once again. Philip Rivers spread the ball around, and Pittman caught all three of his targets for 66 receiving yards and one touchdown. In the previous two games, Pittman earned 15 targets, 11 receptions, and 157 receiving yards. With Corey Davis likely rostered in more leagues, check for Pittman as one of the sneakier wide receiver pickups in the 2020 fantasy football Week 12 waiver wire.

With P.J. Walker at quarterback, Curtis Samuel earned the second-most targets on the team. Samuel caught eight of ten targets for 70 receiving yards and one receiving touchdown. Outside of last week against the Buccaneers, the Panthers increasingly involved Samuel in the offense. In Week 12, they face the Vikings, who allow the 4th most fantasy points to the wide receiver position. Although the Vikings defense performed better recently, Samuel still ranks as one of the top wide receivers in the 2020 fantasy football Week 12 waiver wire.

Another home game for the Browns that included some wind and rain, and it ended up as more of a defensive game with several fumbles and turnovers. With Carson Wentz playing poorly, it’s hard to trust an Eagles receiver, even Travis Fulgham, recently. Over the past two games, rookie Jalen Reagor caught eight of 12 targets for 99 receiving yards. Reagor provides flex-worthy value but not quite into the comfortable starting category quite yet.

As one of the more unheralded receivers in Tim Patrick, he led the Broncos in receiving yards on Sunday. Patrick caught five of eight targets for 119 receiving yards making this his third 100-yard receiving game on the season. If you miss out on other receivers mentioned above, then make sure to snag Patrick in deep leagues.

As one of the more enticing rookie receivers based on his College Prospect Profile, Denzel Mims led the Jets in targets and receiving yards. He ranked in the top 10th percentile in Speed Score, Burst Score, and catch radius. Mims caught three of eight targets for 71 receiving yards. In three out of the four games he played in 2020, Mims earned seven or more targets. Throughout most of the season, Jamison Crowder typically led the Jets in targets. In Week 10 against the Patriots, Crowder came into the week banged up. However, in Week 11, Crowder only received three targets for one reception and 16 receiving yards. With the increased opportunities, make sure to roster Mims in deep leagues. However, we note that Joe Flacco tends to throw it deep to guys like Mims and Breshad Perriman over Crowder.

Outside of Davante Adams, the second receiver outside of the running backs seems to rotate week by week. Robert Tonyan caught all five of his targets for 44 receiving yards and one touchdown. Over the next two games, Tonyan faces the Bears and Eagles, who allow the 7th and 10th most fantasy points to the position. With the inconsistent production and opportunity, Tonyan falls in the large group of streaming tight ends.

In one of his best games of the season, Jordan Akins caught five of six targets for 83 receiving yards. Before this game, Akins only logged one other week with more than six targets but never totaled more than 55 receiving yards. Akins ranks as more of a deep-league streamer in the 2020 fantasy football Week 12 waiver wire. If he consistently earns about five to six targets moving forward, then Akins becomes more interesting.

If you found Corbin’s Week 12 Waiver Wire helpful, you’ll also want to check out our Week 12 FAAB Guide for more help in optimizing your rosters.