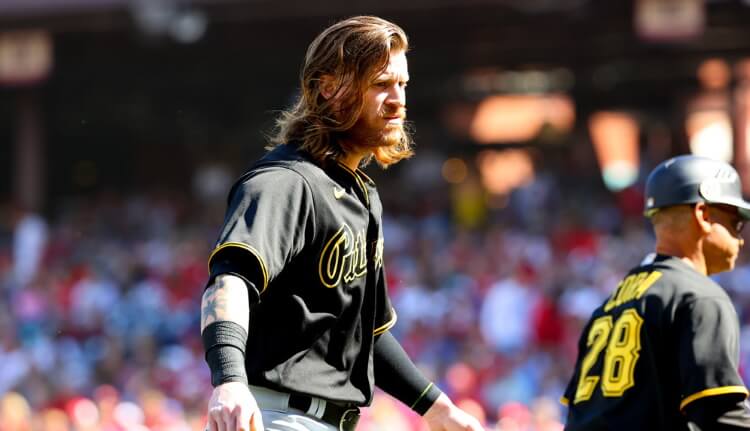 For this week’s write-up, we’re only going to highlight hitters who are on hot streaks.  This is partly due to the fact that there are a bunch of interesting players on hot streaks this week.  The other reason is that we’re still in the early part of the season where it’s important to continue to trust your draft process. Meaning that for the most part, you should continue to stick with the players you drafted, despite their cold starts to the season.  So with that in mind, let’s take a look at some players who are streaking!

Ben Gamel has been quietly producing in Pittsburgh. Since the beginning of May, he has 18 hits in 11 games, including four doubles, one triple, and two home runs. He also has a .419/.468/.698 slash line with a .279 ISO and .504 wOBA in that span. One of the biggest improvements Gamel has made this season is that he’s striking out less. His 18.6% strikeout rate is six points lower than his career mark, and his 10.6% walk rate is in line with the double-digit rates he’s posted since 2018.

Gamel’s plate discipline metrics are also looking good across the board. He’s making contact in the zone at a 91.9% clip and his 25.4% O-Swing% is a career-best. The Pirates are in the bottom of the league when it comes to producing runs, but that doesn’t mean Gamel can’t be a fantasy asset. He’s led off in nine of the last 11 games, scoring seven runs and eight RBI. As long as Gamel maintains his plate improvements, he should continue to produce at the top of the order. This is a sneaky hot streak to ride.

Manuel Margot has been on an absolute tear. He’s currently riding a 10-game hitting streak, with three home runs, eight runs scored, 14 RBI and four stolen bases. Whew! He is also putting up an incredible .471/.514/.853 slash line and a .583 wOBA and 308 wRC+ during his streak.

Much of Margot’s success is fueled by strong plate skills and quality of contact metrics. He has an elite 13.1% strikeout rate and his 90.6% Z-Contact% and 82.4% Contact% rate are some of the best of his career. Regression will likely come, but Margot should still put up strong run production totals to go along with a little bit of pop and speed. Be sure to take advantage, especially on the steals front – Margot has never stolen fewer than 10 bases in the past five years, including in the shortened 2020 season.

The Guardians are a surprisingly good team this season. Both their team wRC+ (118) and strikeout rate (19.9%) are top-three in the league. With Naylor hitting in the middle of their order, there’s a lot of fantasy goodness to be had. Keep in mind that Naylor landed on the COVID injured list on May 13, putting his hot streak on pause. However, this could still be a streak worth riding once he returns.  Scoop him up if he was dropped after the COVID news.

Yadiel Hernandez (OF – WAS)

Yadiel Hernandez started seeing regular playing time with the Nationals after the trade deadline last season, and the 34-year-old hasn’t given them any reason to move on. He has 15 hits in his last 10 games started, with one home run, seven runs scored, eight RBI and a stolen base.  He’s also hitting .395/.452/.605 during this streak with a .211 ISO and 198 wRC+.

Hernandez makes an average amount of contact, but it’s the quality of contact that stands out. His 13.6% barrel rate and 45.5% hard-hit rate are both career bests, with his barrel rate in the 87th percentile. Hernandez is a middle-of-the-order bat who should continue to produce with OBP monsters Josh Bell and Juan Soto hitting in front of him.

Similar to Ben Gamel, Sheldon Neuse is another player who shouldn’t be overlooked because he plays on a bad team. He hit safely in eight of the last 11 games, scoring seven runs and stealing a base. Neuse’s season-long numbers aren’t too shabby, either. He has two home runs, 14 runs scored, 14 RBI and four stolen bases while slashing .281/.344/.386 with a 125 wRC+.

Neuse won’t be much help in the power department, but take advantage of his hot streak if you’re in the market for runs or stolen bases. As long as he keeps hitting, he bats primarily out of the two-hole and has a .344 OBP on the season. Neuse’s 28% strikeout rate isn’t great, but it’s four points above his career norm. Get those runs where you can!