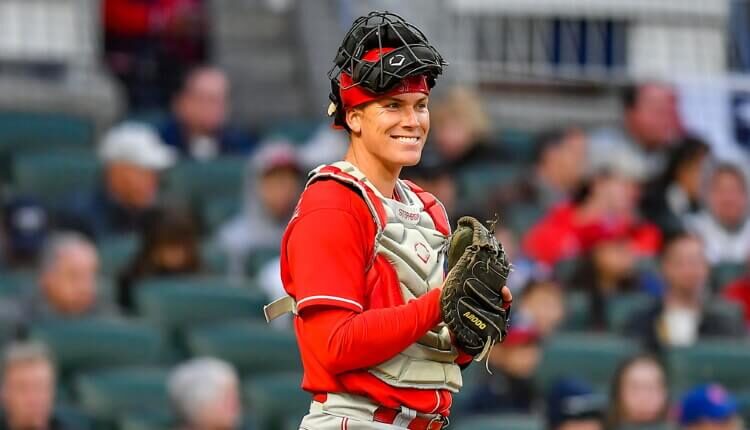 It was an exciting week of baseball to say the least. We had some doubleheaders, a no-hitter, and even a cycle by a player who was a riser in this article last week. Player values are changing by the day, so it’s important to monitor trends and stay up to date on who’s hot and who’s cold. Here are week 5’s risers and fallers.

Garcia seems to fly under the radar and hasn’t gotten the attention he deserves. He now has back-to-back starts with 1 ER or less and 9 Ks in each of those games. He also hasn’t walked more than 2 batters in any start this season. It’s encouraging to see him lower the walk rate, although his strikeout rate is a tick lower than 2021 as well. Nothing else really stands out as different from last year to this year. Garcia just seems to be building on the success he had last season, which is always good to see from a young pitcher. The stock continues to steadily rise for Luis Garcia, who looks better and better with each start.

It didn’t take Stephenson long to get going after returning from the IL with a concussion. He has been powering the Reds to victory over the past week, racking up 11 RBI in a lineup that doesn’t score much. I am nervous that he has not been hitting the ball hard and relies more on contact though. Stephenson’s average exit velocity is down to 86.5 mph from 88.4 mph in 2021. Pair that with his xBA of .231 and I’m not sure Stephenson is someone who can thrive in the current hitting environment. He hits in a good park and currently has a .956 OPS, so he’s a solid option for catcher-needy teams.

In a year with prospect headliners such as Julio Rodriguez and Spencer Torkelson, Juan Yepez has stolen the rookie spotlight. Yepez is playing regularly and has found himself hitting in the middle of the Cardinals’ order. Plus, as we have seen most other rookies struggle, Yepez hasn’t looked overmatched at all to this point. He has a 20.7% strikeout rate, which you will definitely take from a newly-promoted hitter. It would be nice to see him walk more than 3.4%, but he is putting the ball in play and getting encouraging results thus far. Yepez is on the rise and will be an interesting 1B/UT option moving forward.

After a nice start to the season, Sánchez has gone completely cold. Granted, he has been very unlucky with a .105 BABIP over the past week. It’s also a good sign that his K% is below 30 for the first time in his career. The walk rate has dipped to about 6%, and while you would like to see him walk more, it’s encouraging that the strikeouts are lower as well. There’s nothing of concern in his profile, this is just who Jesús Sánchez is. I’m not too worried about Sánchez and think this would be a good opportunity to buy low on him if you needed extra OF depth.

Megill was a breakout candidate for many coming into this season. He performed as such through his first five starts, compiling a 1.93 ERA with 27 Ks in 28 IP. But, the wheels have somewhat fallen off over the last two starts. He got lit up against the Nationals and could not make it out of the second inning. Maybe some of the early-season shine has faded on Megill, but he’ll still be a solid contributor moving forward. A couple of bad starts will lower his value, but we may have been a bit overzealous after he breezed through his first 5 starts. Megill will be fine, but he has moved down my rankings just a tad after this blowup.

Like many rookies, Torkelson has struggled to really get going at the plate. He’s striking out at a 33.7% rate and has really struggled over the past week. In redraft leagues, it’s hard to keep starting Tork until we see some adjustments. I have no doubt that he will be just fine in the long run, but he’s going through the normal struggles of first-year players. His value is down, but you probably have to hold him if you drafted him. There will be a point later in the season when Torkelson finds a groove, but he clearly needs more time to adjust to big-league pitching.