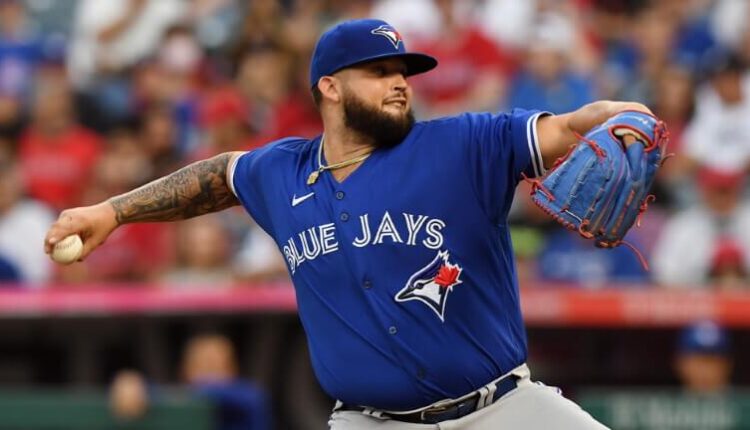 You can see, we have Coors Field, Dodger Stadium, Truist Park, and Guaranteed Rate Field with two mega offenses, which gives an advantage to certain hitting stacks. There are also plenty of pitching-friendly options over the weekend. More on that in the Ballparks section of this column.

Presently, the only significant rain chance is in the Houston at Washington series for the weekend. There does appear to be the possibility of heavy wind in Colorado that could affect games against the Royals, especially on Saturday. The direction and speed of those winds might play a pivotal role in who we play in those parks.

Colorado Rockies (vs. KCR) – Just because it’s obvious doesn’t mean it’s wrong. Yes, we get the home park in Coors Field. Yes, we are likely getting some strong winds to help the offenses even more. But add in the fact you have Zach Greinke and Carlos Hernandez going against Colorado and this could be an offensive bonanza. Greinke’s soft-tossing style won’t play this weekend. His fastball velocity ranks 56th out of 58 qualified pitchers this year and his strikeout rate is dead last. Hernandez has the 15th-highest walk rate in baseball this year (4.76 per nine innings) and allowing free men on base in Colorado is a recipe for disaster.

Houston Astros (@ WSH) – The Astros get a nice park upgrade this weekend from a perfectly average offensive park factor to the fifth-best run environment over the last three years. The Astros start off the weekend with two mediocre-at-best righties in Josiah Gray and Erick Fedde. Houston is eighth on the season against right-handers, compiling a 112 wRC+, and that was before the offensive barrage against the Twins on Wednesday/Thursday. Against righties, they also have the fourth-best walk rate and the 10th-best slugging percentage. Players like Yordan Alvarez and Kyle Tucker are going to be pricey in this series, but they will be worth it.

Toronto Blue Jays (@ TBR) – For a number of reasons, the Blue Jays pitchers are standing out this weekend as they travel south to Tampa Bay. First, they get the park upgrade to Tropicana Field which ranks 25th in offensive park factor the last three years. In addition, the Rays rank sixth in the majors this season in team swinging strike rate. They have been a free-swinging bunch and they counterbalancing it with only an 8.4% walk rate. I will be all in on as much Kevin Gausman and Alex Manoah as I can. I would not go overweight on Hyun Jin Ryu as he works his way back from injury. This is certainly not a difficult lineup to navigate once you get past the first few hitters. The Rays have four regulars who have a strikeout rate north of 25%

Milwaukee Brewers (@ MIA) – The Marlins’ bats don’t stand much of a chance this weekend against the National League leader in strikeouts per nine innings. And, oh yeah, they also have to face Corbin Burnes and Brandon Woodruff. Eric Lauer sandwiches in between Burnes and Woodruff, who both carry an 11.6 K/9 into the weekend. Lauer comes in at 12.74 and has been straight dominant for three starts in a row. They also get aided by loanDepot park, which has the 23rd-ranked offensive environment over the last three seasons.

Joc Pederson (OF, SFG) – With the Giants set to face three straight average right-handers this weekend, it’s time to fire up the shares of Joc Pederson. Yes, there is always the risk of a late-game swap in the lineup if the Cardinals bring in a lefty to face him, but the splits are so favorable for him against right-handers that he is worth missing a plate appearance each game. So far this season, Pederson’s slugging percentage against righties is an incredible .551 accompanied by a .290 ISO. We mentioned Greinke’s soft fastball above, but Adam Wainwright’s is actually slower than Greinke’s. Dakota Hudson has an 11.8% walk rate this year and has a 51.1% hard hit rate. The reasons to play Pederson this weekend just keep lining up.

Bruce Zimmermann (SP, BAL) – You may have heard about Zimmermann’s breakout year that is apparently upon us right now. But that narrative might go into overdrive this weekend when we see him step to the rubber against the Detroit Tigers. First, Detroit’s offense: Over the last even days, they have an abysmal 56 wRC+, or 44% below average (last in the league). Their on-base percentage of .256 ranks 29th and they are striking out over 22% of the time. Zimmerman is having his success thanks to a large increase in his changeup usage, a pitch that has a 26.4% swinging-strike rate. The Tigers have the seventh-highest swinging-strike rate in the league over the last two weeks so this looks like the perfect matchup for Zimmermann.

Give Up on Jose Berrios? No Way, Jose!