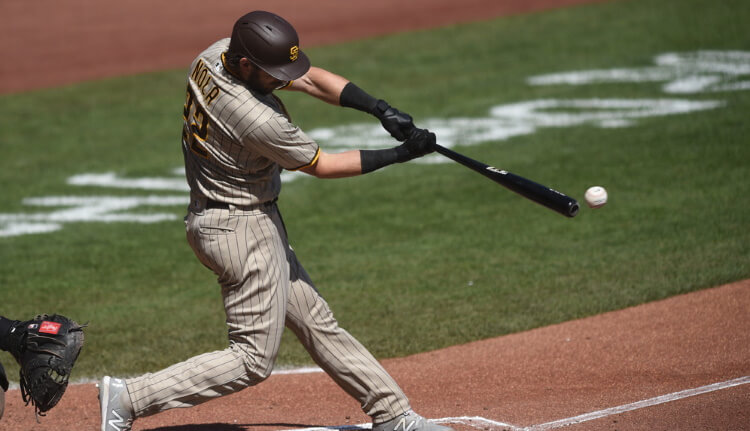 RisersWhen the season was still a week away it seemed that the days were dragging on. Now, we’re a week into the season and have plenty of overreactions from the first games of the year. Each week I will recap some lesser talked about players who have raised and lowered their value while comparing their weekly performance to their overall season. My goal is to highlight players that consistently show up as a riser or faller as we move through the season. Without further ado, these are the players who have risen and fallen in value over the last week.

Lux was an interesting player during this draft season. Some were hoping for a breakout that we didn’t get last season. Others didn’t believe in the talent and didn’t touch him in drafts. If his first week is any indication, Lux is going to make the believers happy. Through 18 ABs, Lux is slashing .333/.409/.965 with a homer and 5 RBI. He also has done all of his damage in either the eighth or ninth spot in the lineup. It has been encouraging to see Lux barreling the ball and making hard contact early in the season. He has a 20% barrel rate with a 92.7 average exit velocity. Last season, his barrel rate sat at a putrid 3.9% with an 89.8 average exit velocity. Of course, it’s a small sample size, but if Lux can keep hitting the ball hard with a good barrel rate, he could break out in a big way. If he can sustain some of this early season success, Lux should work his way up the batting order, giving him even more value in such a deadly lineup.

Streaming catchers early in the season? If so, Austin Nola should be added if he’s available. Injuries have plagued Nola over the course of his career. He has only had more than 200 ABs once in his career, so there’s some risk here. But so far Nola is healthy and has looked like a top-10 catcher. In 23 ABs this season, Nola is hitting .261/.321/.713 with a home run and even a stolen base. If there’s any chance a catcher can get you steals, he should be on your radar. He shouldn’t be counted on for steals necessarily (he has 2 career SBs), but it looks like he might give you at least a few in a position that you usually expect 0. His playing time is secure with Jorge Alfaro as the only other catcher on the roster, and he sees some time at DH as well. If you need an upgrade at catcher, Nola can provide you with solid production as long as he is healthy.

Bassitt wasn’t someone I was targeting in drafts this year and I am very disappointed in that oversight. Bassitt has looked sharp in his first two starts for his new squad, with quality starts in each along with a 0.75 ERA, 0.667 WHIP, and 14 strikeouts over 12 IP. Again, small sample size, but his K-BB% is an outstanding 31.9%. Most people were predicting that Bassitt would thrive with the Mets, but he has more than exceeded expectations so far. If you can trade for Bassitt at a reasonable price, I would do so before he fully establishes himself as a solid SP3 with SP2 upside. I’m expecting Bassitt to continue to put up starts similar to his first couple of stellar outings.

I’m still a believer in Grisham, but his first week of stats is not encouraging. With a slash line of .118/.189/.307, Grisham is at risk of losing playing time already. He is being given every chance to be the leadoff man, but if he can’t even get on base he’s going to find himself towards the bottom of the lineup. I wrote an article in the preseason describing why I think Grisham is closer to the player he was in 2020 than in 2021, and I still believe in his talent, but I am nervous for Grisham if he can’t get it going before the end of April. The results haven’t been there yet, but if you believe in Grisham as I do, now is the time to go get him on the cheap.

Everyone was enticed by the idea of having a catcher that gets outfield reps and contributes double-digit steals. That hasn’t come to fruition yet for Varsho, as he only has three hits through 20 ABs with a 40% strikeout rate. It was nice to see him hit a home run on Friday against Chris Bassitt, so maybe that will be the spark he needs to get going after a slow start. He’s hit out of the leadoff spot more times than not, so the opportunity is there for good production. Keep an eye on how Varsho performs in the coming week against the Nationals and Mets. There should be no reason to panic after such a short sample size.

Kirilloff is only on this list because of his wrist injury. Was it impacting him over the first week before he landed on the IL? Will it impact him like it did last season when he comes back? We won’t know the answers to these questions until he returns, but the lingering wrist injury is a cause for concern. Even when Kirilloff comes back, I wouldn’t trust him in my lineup until he shows he is past the wrist concerns. I’d be buying low in a dynasty setting, but I’m nervous about using a roster spot on a guy who I can’t fully trust in redraft leagues. See how he looks when he returns from the IL, but be cautious, it seems his wrist may limit him again this season.

Look Who’s Streaking: The Cleveland Guardians are on Fire!