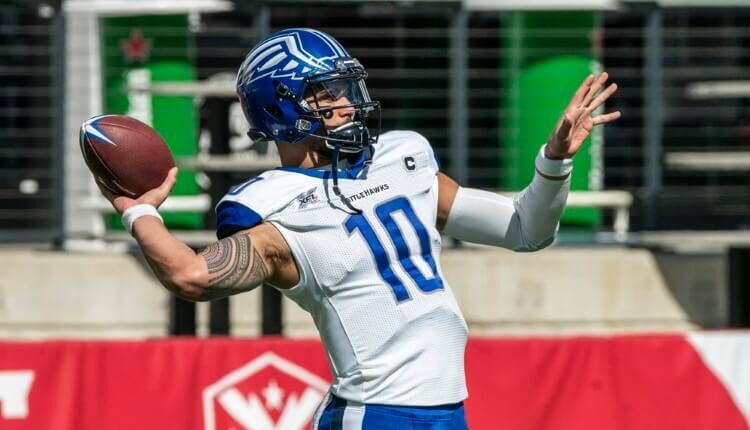 When you love football as much as I do, you’ll take it in any form that you can get it. For years, NFL fans have had to turn to other sports in the spring for entertainment.  The USFL appears to be in the perfect position to finally fill that vacancy between the off-season and Week 1. These are exciting times for fans and sports bettors alike. For fans, it gives them a new squad to root for. For bettors, it gives everybody a level playing field. DraftKings had recently announced that they will be offering USFL contests for the inaugural season. If you’re here reading this, it’s most likely because you recognize that the slate is clean for everyone and you are looking for an edge over the competition. Considering all of the new names and faces across the league, this article will serve as a sort of “meet and greet”. It must be noted that in this first week, salaries are meaningless. That’s because we have no idea what these teams are actually going to look like when they take the field Saturday and Sunday. The best we can do until then is research, speculate and use common sense.

Dubbed by some, the Patrick Mahomes of the XFL, Jordan Ta’amu thrived in the new league. In just a five-game sample size, Ta’amu threw for 1,050 yards, 5 TDs, and only two interceptions. What really makes him valuable in fantasy is his high rushing floor. In those 5 games, the QB racked up 217 yards and a score. After a season in the NFL, playing behind the aforementioned Patrick Mahomes, Ta’amu has undoubtedly learned a ton from Patrick and QB guru, Andy Reid. Look for him to pick up right where he left off in USFL, quarterbacking this high-powered offense (on paper).

Kyle Sloter’s popularity in the Minnesota Viking’s community had to have made Kirk Cousins nervous. Sloter, an undrafted free agent, first signed with the Denver Broncos in 2017. He enjoyed a very productive preseason, completing 31 of 43 passes for 413 yards, 3 TDs, and 0 interceptions. Apparently that wasn’t enough upside for Denver as he didn’t make the 53 man roster. Denver attempted to sign him to their practice squad, but the Vikings swooped in instead. In his first preseason with the Vikings Sloter again showed out to the tune of 443 yards, 4 TDs, and 1 pick. Sloter was once again cut, but has put enough on tape to garner a ton of excitement. He’ll likely be playing against the same level of talent that he thrived against in the NFL preseason.

The most expensive wide receiver on the slate, Zuber was the second WR selected in the USFL draft. He’s a 6-footer who weighs in at 190 lbs. and runs a 4.54 40-yard dash. His metrics certainly are not eye-popping and his college years at Kansas State and Mississippi State were not memorable. So why is he so expensive? The Houston defense projects as one of the worst defenses in this new league. If that projection holds true, then it stands to reason that the team will be playing from behind more often than not. In comes Zuber. That coupled with the fact that his head coach, Kevin Sumlin ran a spread, pass-heavy offense while coaching at Arizona, could possibly warrant the price tag.

Funny how the 2nd most expensive WR is actually the 1st WR to be drafted in the USFL.  Bolden is a smaller speedster who played at Oregon state where he caught 170 passes in four seasons for over 1,800 yards and 7 touchdowns. He also carried the ball 95 times for 727 total yards and 3 more touchdowns. Considering the fact that he’s a dual-threat who can hurt you on the ground and through the air puts him firmly above Zuber in my book. His smaller statute most likely means that he’ll run most of his routes out of the slot, a friendlier position for less experienced quarterbacks.

With the second pick in the running back round, the stars selected Darnell Holland, a 5-foot-10, 195-pound RB out of Kennesaw State. In college Holland wasn’t a workhorse as he never recorded more than 80 carries in a single season, however, he did finish with 949 yards in his final season. He was tragically misused as a pass-catcher, recording only 35 receptions in his college career. Holland possesses mouth-watering speed, running an unofficial 4.38 40-yard dash at his pro-day. There is some speculation that this will be a committee backfield, with multiple backs toting the rock, but thanks to Holland’s spring league experience and draft stock, he should get the first crack.

Finally a big boy. The Breakers used their third overall receiver pick on former Arizona WR, Shawn Poindexter. At 6-foot-5, 218 pounds, Poindexter ran a 4.73 40-yard dash at his pro day. At Arizona, he mostly deployed in a field-stretching role. It is fair to question how a guy can stretch the field running only a 4.7. That’s because Poindexter can absolutely jump out of the stadium. In his final year he produced in a big way with 759 yards and 11 touchdowns on 42 catches. That’s a whopping 18.1 yards per reception. His contested catch ability has been his calling card throughout his career, a trend that should continue in the USFL. Using common sense, that ability puts him firmly atop my red zone threats list. The more red-zone targets, the more touchdowns.

Indiana running back, Stevie Scott went undrafted in the 2021 NFL draft. Fortunately for him, the Saints had their eye on him and signed him to the squad. Scott would work out all summer with the Saints before being a part of the first round of cuts. An injury to a Broncos RB prompted the team to seek out an emergency depth piece and Scott fit the bill. Stevie Scott is an intriguing fantasy option because he has a nose for the end zone. In fact, he is the 4th all-time touchdown leader at Indiana. While he does not possess elite breakaway speed, he is a downhill runner who has a rare combination of shiftiness and raw power. He is a fine pass protector as well, which indicates that he could be on the field on 3rd downs as well.

Fantrax was one of the fastest-growing fantasy sites over the last few years, and we’re not stopping now. We are the most customizable, easy-to-use, and feature-rich platform in the industry, offering the greatest fantasy experience for your dynasty, keeper, redraft, and best ball leagues. Fantasy sports doesn’t sleep, and neither does Fantrax, with seasons running 365 days a year. Take your fantasy leagues to the next level now at Fantrax.com!
usfl
Share