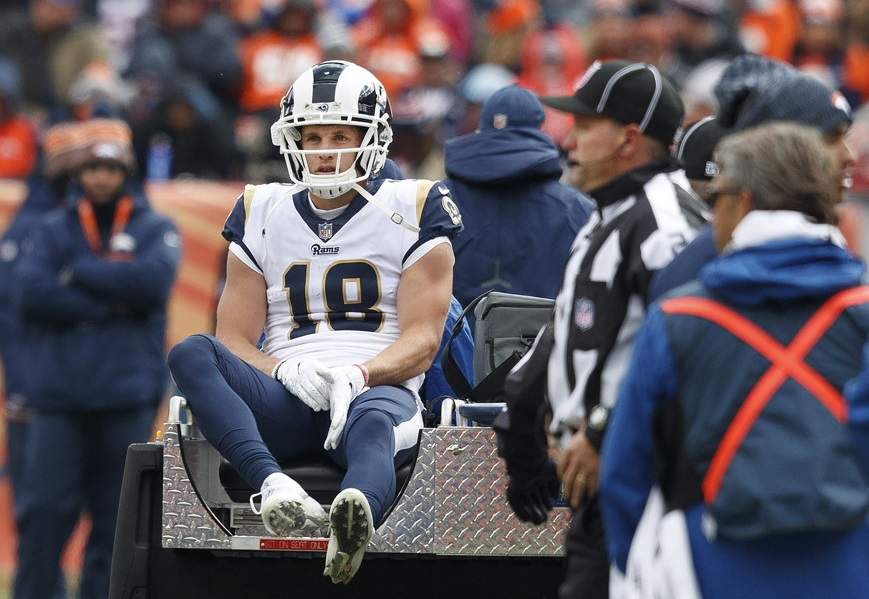 Cooper Kupp was the biggest name to go down in Week 6 as he’s been diagnosed with an MCL tear. Sean McVay says Kupp will miss practice this week and is considered week-to-week. You can imagine the Los Angeles Rams will be careful with their superstar slot wide receiver. It’ll likely mean more work for Todd Gurley, Brandin Cooks and Robert Woods, but I don’t know how much better that trio can be. Especially Gurley, my goodness he can play. There will be some appeal in Josh Reynolds with the Kupp injury, but I myself am not crazy about the add. Reynolds is a nice depth piece in a high powered offense, but he’s going to be the fourth option at best. That’s not necessary a bad thing, so if you have the room take a look at him as he’s only owned six percent of leagues. It was a bad week for wideouts after all.  Read on for more top options from the Week 7 Waiver Wire.

The Eagles backfield last week played out just as we predicted it would. Wendell Smallwood started the game and played the majority of snaps, while Corey Clement led the way in the red zone. He scored a touchdown and leads the Eagles with 10 red zone rushing attempts. Smallwood has a couple himself, but I lean Clement. It’ll remain a committee.

As mentioned, it was a rough week for wide receivers so you could be in a tough spot. Albert Wilson and Tyrell Williams are owned in fewer than 60 percent of Fantrax leagues, but they are only depth pieces for me. Starts in deep formats, but I wouldn’t feel great suggesting them as WR3’s in 12-team leagues. The same applies for Cole Beasley. Nice week, but only a FLEX play in 16-team PPR formats and even then…you may not see another game like that.

Ito Smith has a rushing touchdown in his last three games and his 11 carries last week led the team. He’s not a must-start, but he should be rostered considering

*UPDATED: You can go ahead and use your number one claim on Ito Smith. You can also think about it even if you don’t need a back as he’ll make for a great trading piece. With Freeman on the IR, he’ll have to miss the next eight games.

Frank Gore is surprisingly owned in fewer than 60 percent of Fantrax leagues. I get it. Where’s the upside in rostering Gore, but you can’t ignore volume and you should have running back depth. What if Kenyan Drake gets hurt and it’s completely Gore’s backfield? You’ll want to start him then. Gore has 303 rushing yards on 62 carries compared to just 210 on 52 attempts from Drake. KD has been much more efficient in the passing game, but the edge has to go to Gore in standard leagues. Gore racked up 101 rushing yards last week and has over 200 in his last three games. Drake also fumbled the ball on the one-yard line in overtime last week, which only favors Gore in the red zone. Look, it’s not appealing, but 7-12 points a week is not awful.

Chester Rogers headlines the Week 7 Waiver Wire for the third straight week. Rogers has been a solid play for three weeks now and he’ll continue to get opportunities in this offense, even when T.Y. Hilton returns from his hamstring injury. Rogers had another 10 targets in Week 6 and he has 32 in his last three games with 20 catches, 206 yards and a touchdown. Andrew Luck’s 288 passing attempts are the most in the league and a lot of his looks have gone to Rogers in the slot. Cooper Kupp owners should look to grab Rogers.

C.J. Uzomah hauled in six of his seven looks for 54 yards last week. He had the second best matchup of the week for tight ends against the Pittsburgh Steelers, but it was still nice to see his usage. Uzomah has at least 44 yards in three of his past five games and with Tyler Kroft in a walking boot, and Tyler Eifert sidelined, we’re looking at Uzomah being a border line TE1.

As a Quincy Enunwa owner, I’m going to try and make the swap for Jermain Kearse. Enunwa is dealing with a high ankle sprain and is expected to be sidelined at least three weeks. Kearse caught nine of his 10 targets for 94 yards Sunday. It was against the Indianapolis Colts so I’m cooling it a bit, but the volume will be there. The New York Jets are reportedly working out Rishard Matthews, but I’d still rather Kearse. I’ve held onto Matthews in a 16-team dynasty league since the Titans release, if that means anything. Kearse had a fine 2017 season: 102 targets, 65 catches, 810 yards, 5 touchdowns.

Willie Snead has hit the 7.9 PPR mark in five of his six games this season. He has at least five catches in four of his last five games and at least 49 yards in five contests. Snead has racked up 24 targets and 18 catches in his last three games, showing consistency throughout the season. He’ll be playing in one of the highest scoring games this week which just so happens to come against his former team in the New Orleans Saints. The Baltimore Ravens run a fast paced offense and Joe Flacco has thrown the ball the second-most this season.

As discussed last week, Marquez Valdes-Scantling may just be a short term play, but it’s one you have to make when Randall Cobb and Geronimo Allison are sidelined. Both may be back in Week 8 as Green Bay is on bye this week, but this offense has so much potential MVS makes for a great depth piece. Maybe one you can get for cheap due to the bye week and potential return of Cobb and Allison. Valdes-Scantling had three catches for 103 yards Monday night against the San Francisco 49ers. He has 10 catches on 16 targets for 171 yards and a touchdown in his last two weeks.

Jalen Richard has value in deep PPR formats as his 37 targets rank seventh and his 31 catches rank fifth among backs. Richard only has 11 carries for 32 rushing yards, but he has 253 receiving yards which is the seventh-most among RB’s. The Oakland Raiders defense is awful and Amari Cooper is dealing with a concussion, which could mean even more work in the passing game for Richard who has 14 targets and 13 catches in his last two games.

With Jamison Crowder considered week-to-week and Josh Doctson permanently injured, Paul Richardson may be worth a look. He scored a touchdown last week, which came from a red zone target. It was his second in the last three games. Richardson has at least four catches in three games this season, and probably isn’t worth a start just yet, but he should be rostered.

Like these Week 7 Waiver Wire adds? Get more Chris Meaney on his new podcast, By Any Means. Each week he’ll bring in guests from around the industry to break down all the fantasy news you need to know for your march to the championship.