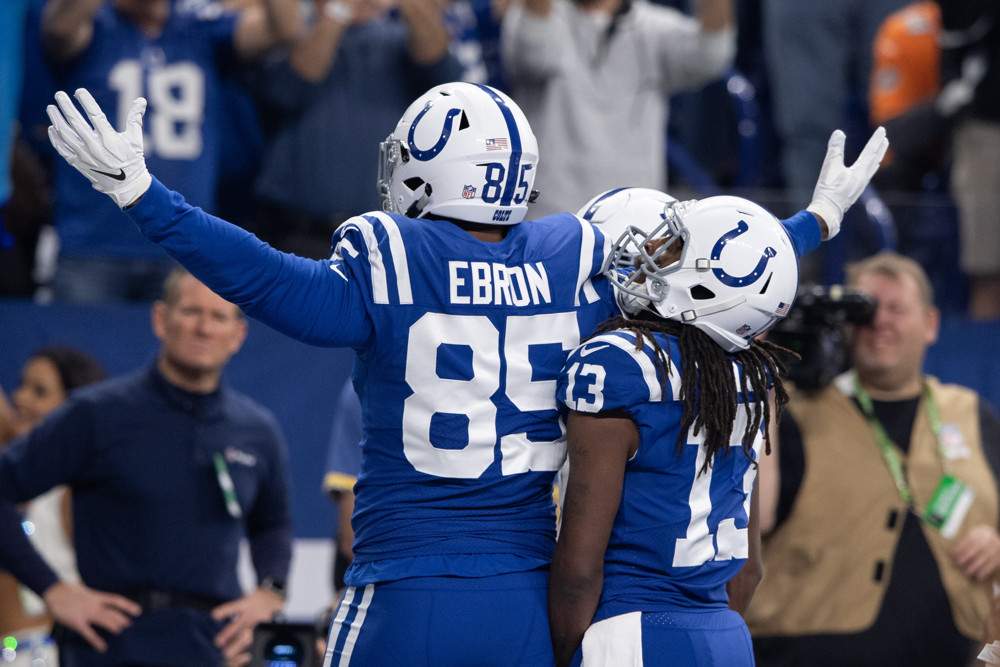 I’ll start by saying that it’s very difficult to label anyone at the TE position a bust. Mainly because most draftees understand the volatility tight ends represent in fantasy football. A bust is when a player doesn’t return the value of the draft pick you spent on them. The problem with tight ends is that only the top few are drafted in the early rounds.

There is a second-tier of TEs that are taken in the middle rounds of fantasy football drafts who are likely the best “bust” candidates for the 2019 season. So that’s what I’m going to focus on. The middle round draft selections that could have you regretting your decision process of taking a tight end earlier than maybe you should have.

I would like to clarify that I’m not necessarily down on the tight ends I’ve included in this article. I’m simply playing out possible negative outcomes for each and how they may not give you the ROI you are looking for given where you draft these guys.

Eric Ebron was a true benefactor of circumstances in 2018. The perfect storm occurred, opening up a tremendous amount of opportunity. Ebron finished the season 4th in targets, 6th in receptions, 5th in yards, and 1st in touchdowns among all tight ends. A truly impressive season, no doubt. But just as quickly a storm can develop, it dissipates in an instant.

Jack Doyle had the 2nd most receptions and 5th most targets for tight ends in 2017. He ranked as the TE8. He accomplished this with QB, Jacoby Brissett throwing to him. In 2018, whenever Doyle and Ebron were active, Doyle dominated targets, snap counts, and routes run. My good friend, Derek Brown points out below.

Doyle isn’t the only one Ebron will have to share volume and red zone opportunities with in 2019. The Colts signed 25-year-old, 6’4″, 236lbs WR, Devin Funchess this offseason. He will look to bounce back from an underwhelming 2018 season. Cam Newton struggled with a shoulder injury which prevented him from throwing effectively downfield. This was a direct hit to Funchess’ production. In 2017 Funchess was the WR21 with 840 yards and 8 TDs. He can certainly generate those type of numbers with Andrew Luck as his quarterback.

Although Jack Doyle and Devin Funchess are the main concerns for Ebron’s 2019 outlook, the Colts did draft rookie WR, Paris Campbell in the 2nd round and will want to get him involved in this offense. Even Mo Alie-Cox (a bigger tight end) could pose a threat to Ebron’s production in 2019. At the end of the day, the changes the Colts have made to their offense will help the offense as a whole but will inevitably hinder Ebron’s fantasy value. There are significantly more mouths to feed in 2019 which will leave Ebron owners hungry for other tight ends.

Evan Engram is considered to be knocking on the door of the “elite” tight end club. Many analysts have him ranked just outside the top 3 TEs. This is driving his draft cost to a place I’m uncomfortable with. First of all, this Giants organization doesn’t have the best of vibes surrounding them at the moment. Eli Manning has proven to be a very unproductive quarterback well before Engram joined the team. The Giants drafted quarterback, Daniel Jones with the 6th overall pick in the 2018 NFL draft. This move is concerning for the receiving fantasy assets as they could be seeing passes from 2 different QBs in 2019. One being a declining “meh” QB and the other, a rookie who has yet to throw a pass on the NFL stage.

The organization has been a ton of questionable moves in recent years that raises some flags regarding the productivity of this offense moving forward. They added Golden Tate to the offense which at first glance you may think is a good roster move for them and it is. Just isn’t a great move for fantasy football purposes and here’s why. Tate runs similar routes to Engram and is a reliable high volume receiver. Before the failed experiment with the Eagles in 2018, Tate had 120+ targets and 90+ receptions in four consecutive seasons with Matthew Stafford and the Lions. Given Tate’s reliable track record, the struggling Manning could find himself using Tate as a safety blanket target with Odell Beckham Jr. in Cleveland. This roster addition although helpful to the Giants actually hurts Engram’s fantasy outlook for 2019.

Jared Cook had the best season of his career in 2018 finishing as the #5 tight end. It’s no secret that Derek Carr didn’t have much else to target in that offense which naturally inflated his numbers. In his 10-year career, Cook had only reached TE1 status one other time in 2013 with the Rams. He was the TE12 that year. Cook has been the TE15 or worse in 7 of his 10 seasons. What I’m trying to say is a significant regression is fully expected for the 32-year-old TE in 2019 given his career trends.

Sure, he finds himself with Drew Brees but in 2019, but too little too late. Brees is 40 years old. We have begun to see a decline in pass attempts in each of the last two seasons and this Saints offense is built around its run game with Alvin Kamara and Latavius Murray. Brees hasn’t produced a top 14 tight end since 2015. Combine Cook’s career peak at the age of 31 and Brees’ declining pass attempts is a recipe for disappointing production considering Cook’s average draft price.

David Njoku finished as the TE9 last season. He received 89 targets, 7th best at the position. You better believe with OBJ in town, a good portion of Njoku’s target share will transfer to the best offensive weapon Baker Mayfield has at his disposal. Jarvis Landry should maintain his target volume as he has well over 100+ targets in every season of his career (since 2014). We also saw a pretty decent connection between Mayfield and rookie WR, Antonio Callaway in 2018. Baker has plenty of options at WR and I’d expect him to pepper all with targets in 2019.

The Browns coaching staff has been vocal about working Njoku’s blocking skills. They would like him to be a “complete” player. This is concerning for fantasy purposes. If the coaching staff had plans to involve Njoku in the receiving game more, I doubt they would put up a stink about wanting him to be a better blocker. Yes, blocking helps open things up for the QB but if you’re the one blocking, that production is not coming your way. The truth is this Browns offense has a decent amount of playmakers, which does include Njoku. My fear is that he will be pushed to block more hindering his overall fantasy production in 2019.

Was Nate too hard on his 2019 TE Busts? If so you need to head on over to the 2019 Fantrax Fantasy Football Draft Kit for more great strategy, analysis, and rankings.