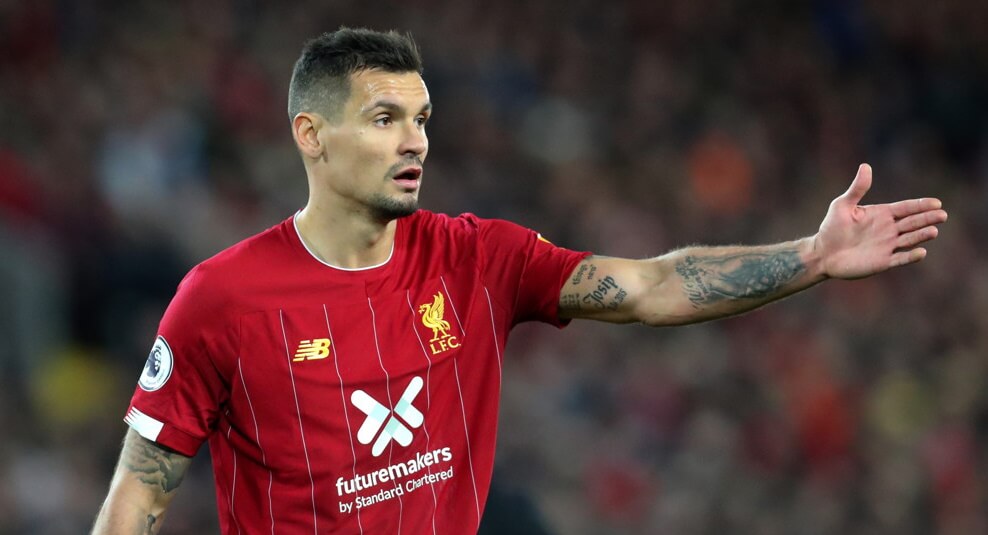 Lucas Digne in Gameweek 14. Clean sheet? No. Goal? No. Assist? No. Fantasy Points? 19.25 – 17th most for outfielders this weekend. How did he do this? Through underlying numbers.

The underlying numbers include key passes, shots on target, successful dribbles, accurate crosses, aerials won, interceptions, clearances, and tackles. They can help identify players on the verge of breaking out or others that are due a fall. A midfielder with a decent FP/G, but without a single assist or goal (yep, Oliver Norwood’s still that man) could be poised for big things if he catches a break or two. Likewise, a forward banging in the goals and with a nice, but not exactly spectacular, FP/G might find his fantasy value drop if the goals dry up (Danny Ings, anyone?). But before we look at these numbers and think about what they might mean for Gameweeks 15, 16, and 17, let’s look at how we fared with our suggestions last time out. 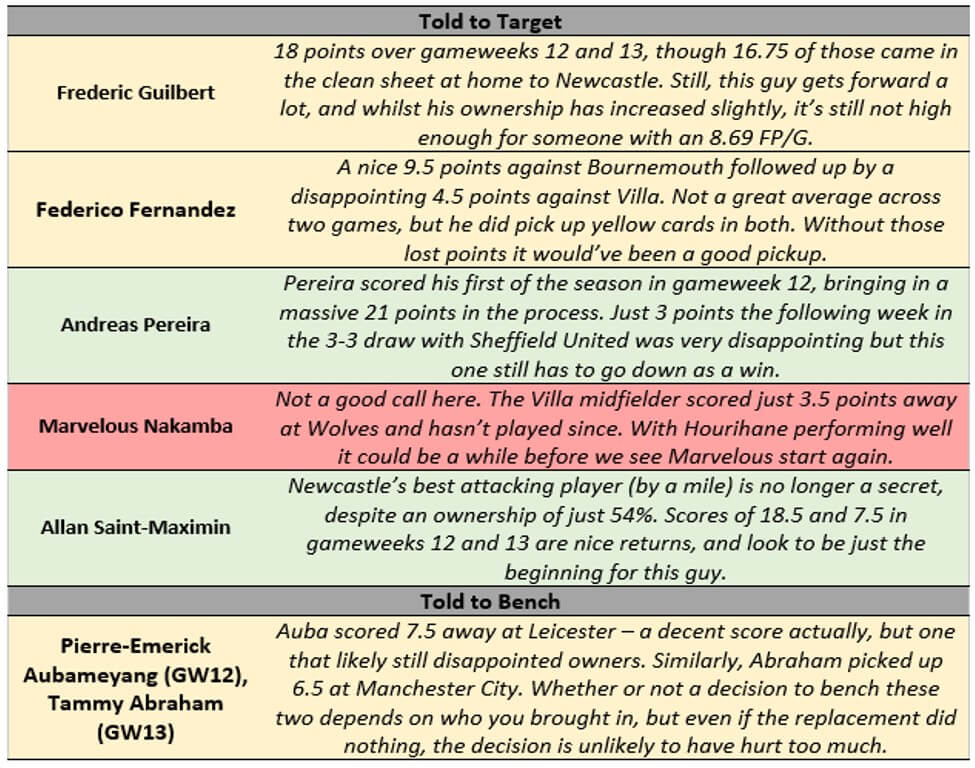 Not bad last time out. Only Nakamba proved to be a poor call, whilst picking up Saint-Maximin would’ve been well rewarded. Guilbert, Pereira, and to a lesser extent Fernandez, had one good week followed by one poor week. Let’s see what we can do this time… 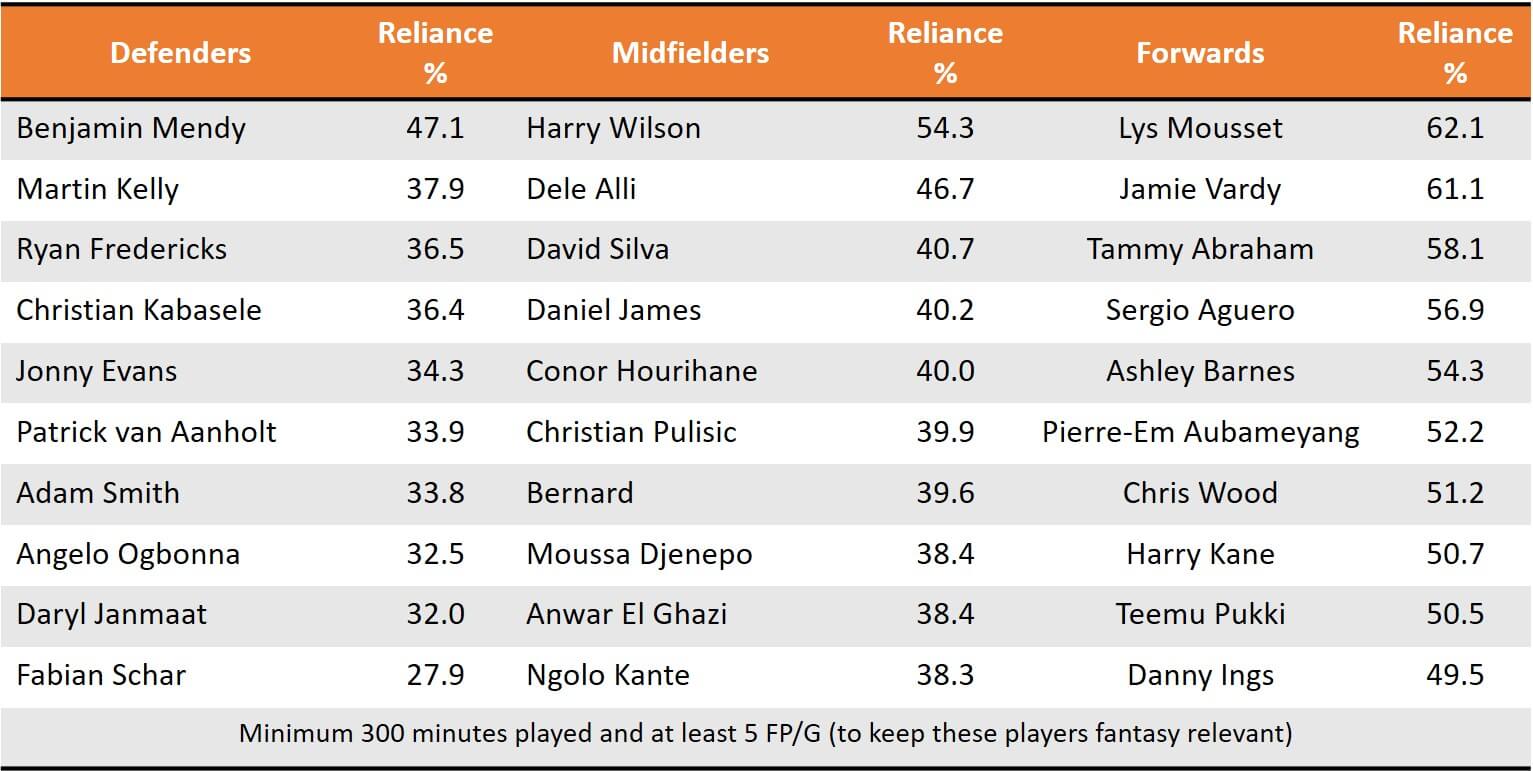 The table above shows the players who are most reliant on either clean sheets (defenders) or assists and goals (midfielders/forwards).

Leicester’s defense is legit, so relying on a clean sheet if you own Jonny Evans isn’t a bad thing. For the rest though, the risk should be far too great to warrant taking. Mendy’s 90% ownership must be a relic of his glorious past, whilst PVA’s 82% ownership is still one of Fantrax’s great unsolved mysteries. In midfield, Harry Wilson is even more reliant on goals after scoring two (with a combined xg of 0.18!) against Tottenham. This is an unsustainable level, and owners should cash in now. Elsewhere, the irony of Ngolo Kante appearing on a list of players reliant on goals and assists is unlikely to be lost on anyone. Interestingly, whilst Vardy has the second-highest reliance % here, even without his goals and assists he would have an FP/G of 6.14 – not bad for someone who “just scores goals”. This is a higher number than for all of the other nine forwards listed, and considerably higher than for Mousset and Barnes, who would have an FP/G of just 3.50 if goals and assists weren’t included. 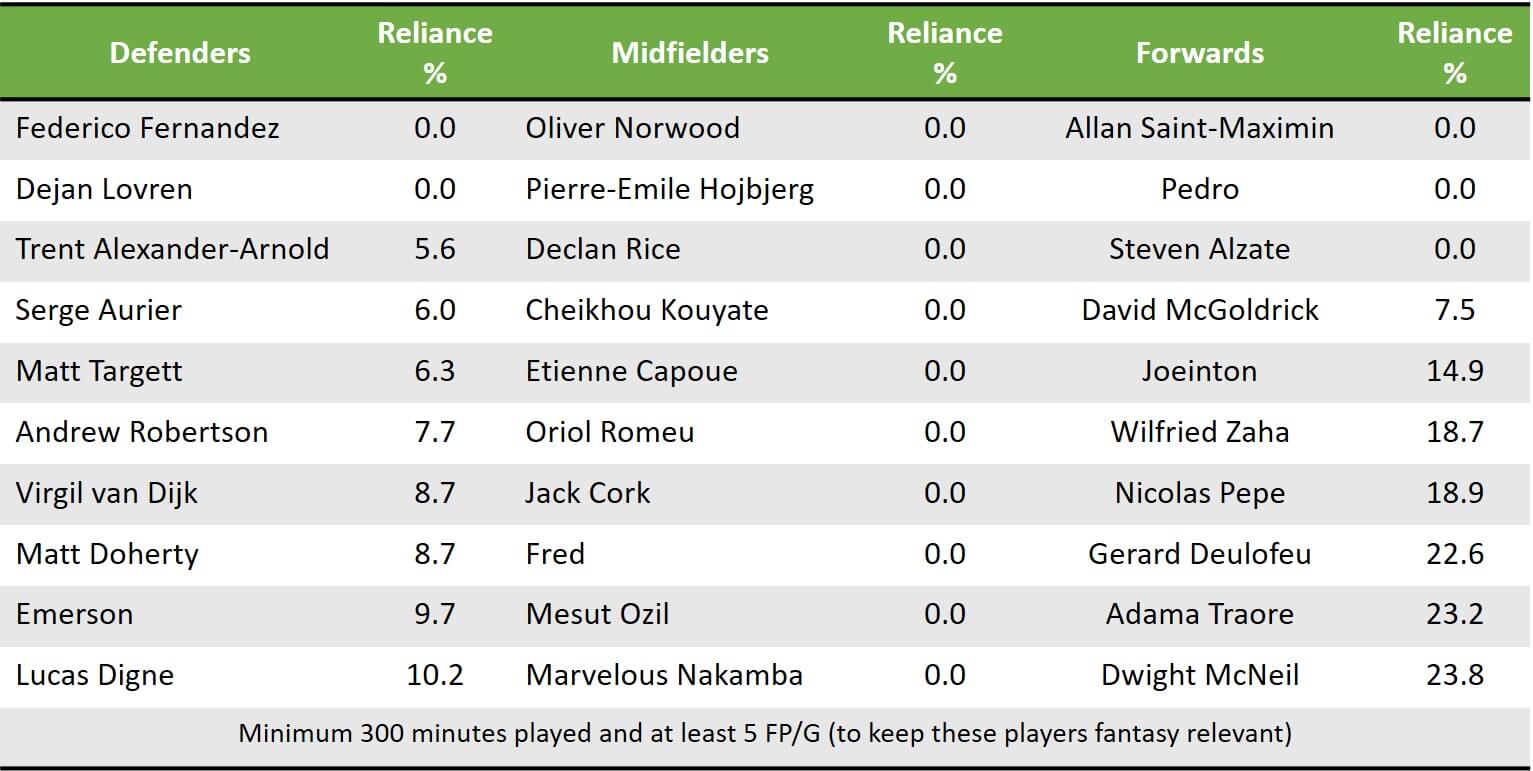 Yet another goal conceded by Liverpool on the weekend, but Understat still has them as the best defense in the league. If clean sheets arrive to match this stat then the four (!) Liverpool players on this list become even more valuable. Don’t count on the same for Fernandez or Targett though. Norwood, Hojbjerg, and Capoue are the ‘ticking over trio’; 7+ FP/G and this is them at their floor level. If one of these is available (ownership %’s suggest they will be!) you should pick them up now. Interestingly with the forwards, Traore probably has an FP/G that is too high to be of use here. Owners of the Wolves man will be unlikely to give up his 11.92, but those of Zaha, McNeil, and Deulofeu – players just shy of double-digit FP/G’s might be persuaded into selling them while they are (probably) at their lowest.

This is being written without knowing the full extent of Charlie Taylor’s injury, but if it keeps him out for a few games, then picking up his replacement Pieters could be a smart move. Burnley have Manchester City at home, which no doubt will be tough, but Pieters has just a 13.7% reliance on clean sheets anyway, so when Pep’s men score, it shouldn’t be too harmful to your fantasy side.

As mentioned above, Liverpool statistically has an excellent defense, and Lovren has a 6.42 FP/G from six games despite not keeping a single clean sheet.  This makes his underlying numbers pretty good. With games against Everton, Bournemouth, and Watford next up, this could easily change and make the center-back a very nice pickup.

I’ve bigged up Hojbjerg on multiple occasions this season, but with Southampton’s upcoming fixtures, it needs to be reiterated. Games against Norwich, Newcastle, and West Ham have the potential to be very rewarding. The midfielder has a 7.19 FP/G and is someone you can rely on to play the full 90 each week…if he can grab an assist or goal, could we see him edge towards double figures?

Alex Iwobi is a risky one because of game time concerns (he’s started just one of the last three and completed 90 minutes only three times), but he could be a beneficiary of a potential managerial change at Everton. A 7.41 FP/G despite scoring just once and not assisting at all could be another case of “buy low”.

Who would have thought, at the start of the season, that EIGHT Sheffield United players would have ownership’s north of 50%? Finding an available one on the free-agent list so you can jump on the bandwagon is tough, but McGoldrick could be one. 23% ownership, 7.32 FP/G (despite 0 goals and 1 assist), started the last six games, and upcoming matches against Newcastle, Norwich, and Villa. Bring him in.

So that’s your lot for this week’s underlying numbers. See if you can grab a hold of Pieters, Lovren, Hojbjerg, Iwobi, or McGoldrick, or make your own calls (and possible trade offers) based on looking at the two tables yourselves. Remember, the green table – those who are not reliant on the big three stats – could be ideal “buy low” players, whilst the orange table – those who are reliant – could be your “sell high” players. Or at least, be aware that tough matchups could require benching them. Note, all fantasy points numbers are based on the Togga-scoring format, whilst % ownership was correct as of Tuesday 22nd of October.