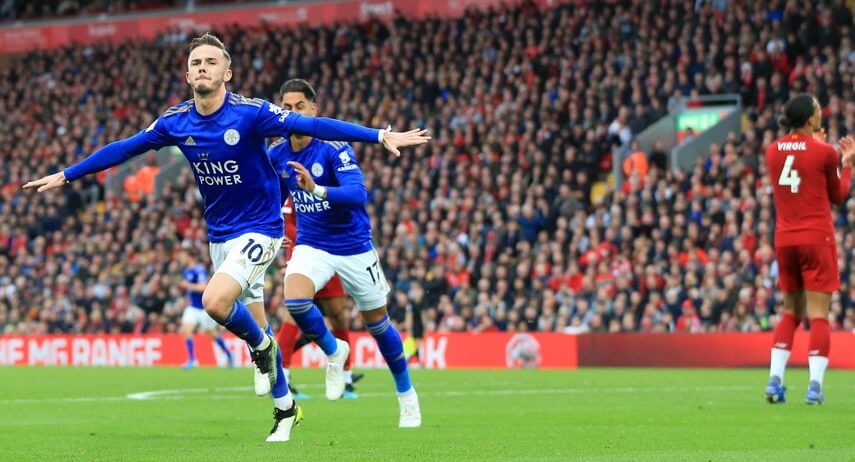 Two tackles won. Two interceptions. One accurate cross. One successful dribble. Six – yes SIX – key passes. Total points: 18. That was James Maddison AFTER JUST 36 MINUTES…in a game that was 0-0. If you ever needed an example of why the underlying numbers are crucial to Fantrax success, the Leicester man’s performance against Crystal Palace was it.

And this is one of the big differences between traditional Fantasy Premier League (FPL) Football and the new draft format championed here at Fantrax. Fantrax offers a much more intelligent way of scoring points, such as through the adoption of the widely regarded “Togga Scoring”. Whilst traditional FPL is hugely reliant on the big three – goals, assists, and clean sheets – in Togga Scoring Fantrax leagues you can maneuver your way to victory through other means: the underlying numbers.

The underlying numbers can help identify players on the verge of breaking out or others that are due a fall. A midfielder with a decent FP/G, but without a single assist or goal (hello, Oliver Norwood) could be poised for big things if he catches a break or two. Likewise, a forward banging in the goals and with a nice, but not exactly spectacular, FP/G might find his fantasy value drop if the goals dry up (Teemu Pukki is a case in point here). But before we look at these numbers and think about what they might mean for gameweeks 12 and 13, let’s look how we fared with our suggestions last time out. 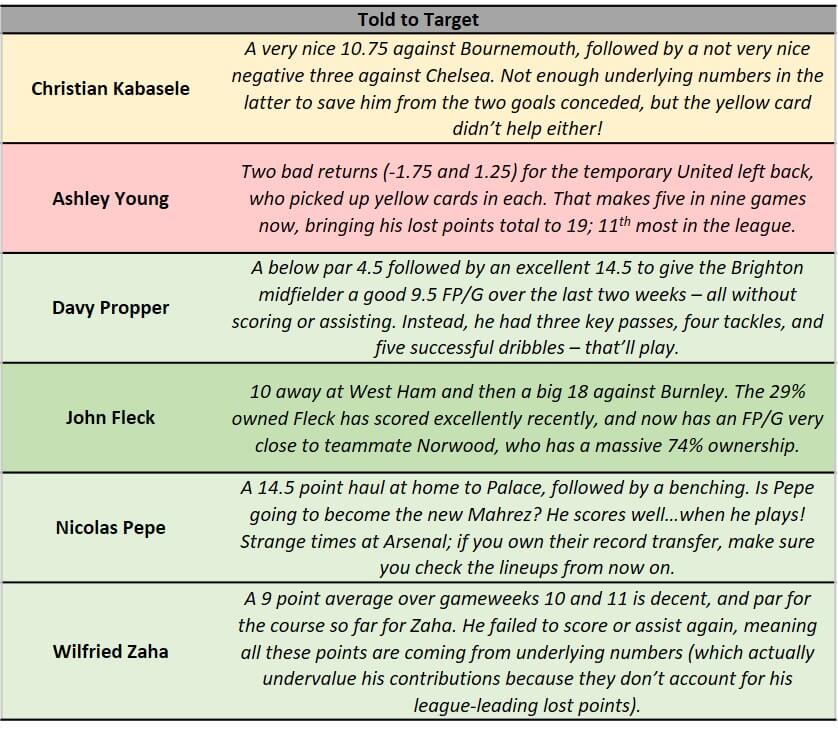 Last time out was an improvement on the horrendous gameweeks 8 & 9 predictions, but a far cry from the near-perfect gameweeks 6 & 7 predictions. Fleck was the biggest success, but Propper, Pepe, and Zaha all had okay returns…or at least, none had a return that should have cost you a matchup. Kabasele was hit and miss, whilst Young was not a good call at all. Note, the Lost Points referred to can be found here. Time to crack on with gameweeks 12 and 13…

Gameweeks 12 and 13: Targets and Tales of Caution… 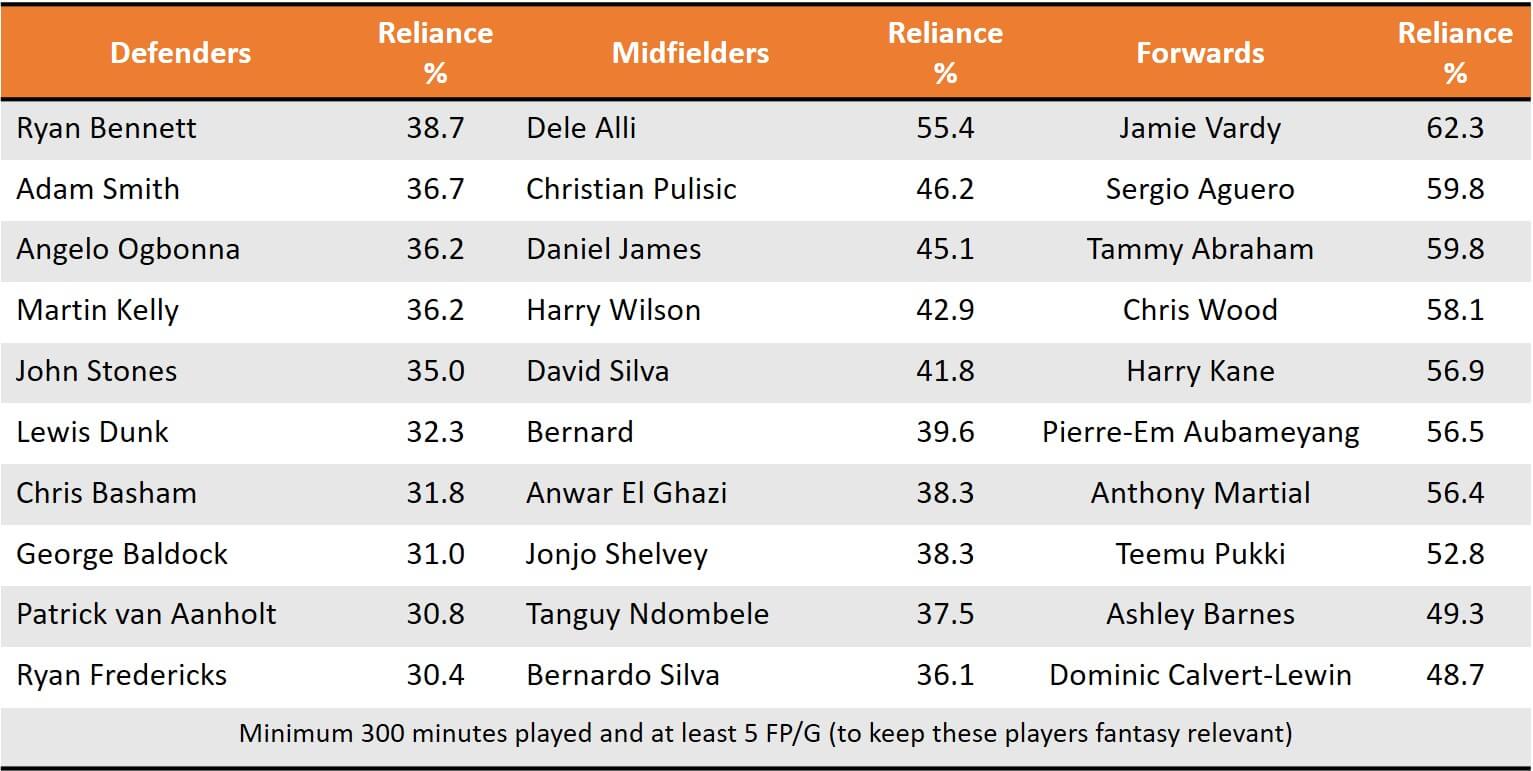 The table above shows the players who are most reliant on either clean sheets (defenders) or assists and goals (midfielders/forwards).

Of the defenders, only Baldock retains a respectable FP/G (over 6 points) once his clean sheets are removed, and therefore aside from him, I probably wouldn’t go near any of these players unless I had to. Patrick van Aanholt would be particularly avoided given his underlying numbers – in 11 games the left-back has made just nine tackles (four of which were in against Leicester), seven aerials won, and five accurate crosses. His FP/G is padded by two goals (an unsustainable stat for him) and isn’t even hindered by lost points, having received zero yellow cards. How he is owned in 85% of leagues is a mystery to me.

Is Dele the new Danny (James)? The Tottenham man has taken the United wingers spot at the top of the reliance table after scoring twice in the last three weeks. I personally don’t think so – his numbers are based on a very small sample (the 300 minutes played only just reaching the criteria for inclusion) and one of the games he was involved in was away at Anfield, where so many other players also produce nothing. Pulisic has played lights out for the last two weeks, and regardless, he’s in an attacking role on a team that creates a lot, so I think it’s likely he continues to be a consistent scorer. Which brings us back to Daniel James – the embodiment of the highly reliant Fantasy option.

Relying on goals from the likes of Vardy, Aguero, Aubameyang, and Kane is perfectly fine in most situations, but having a forward who has good underlying numbers as well as being a goal scorer is the ideal long-term situation in my opinion. Like Sterling and Mane – who lead the league in key passes for forwards and also have 7 and 6 goals, respectively. Vardy is a particularly interesting case because, historically, he doesn’t tend to get many assists…so he is almost wholly reliant on just the goal scoring component, and this explains his boom or bust points scoring. Whether a Leicester attack that is surely going to improve as the season goes on can improve his underlying numbers should be a big question for Vardy owners, because it’s highly unlikely he continues to score at this rate. 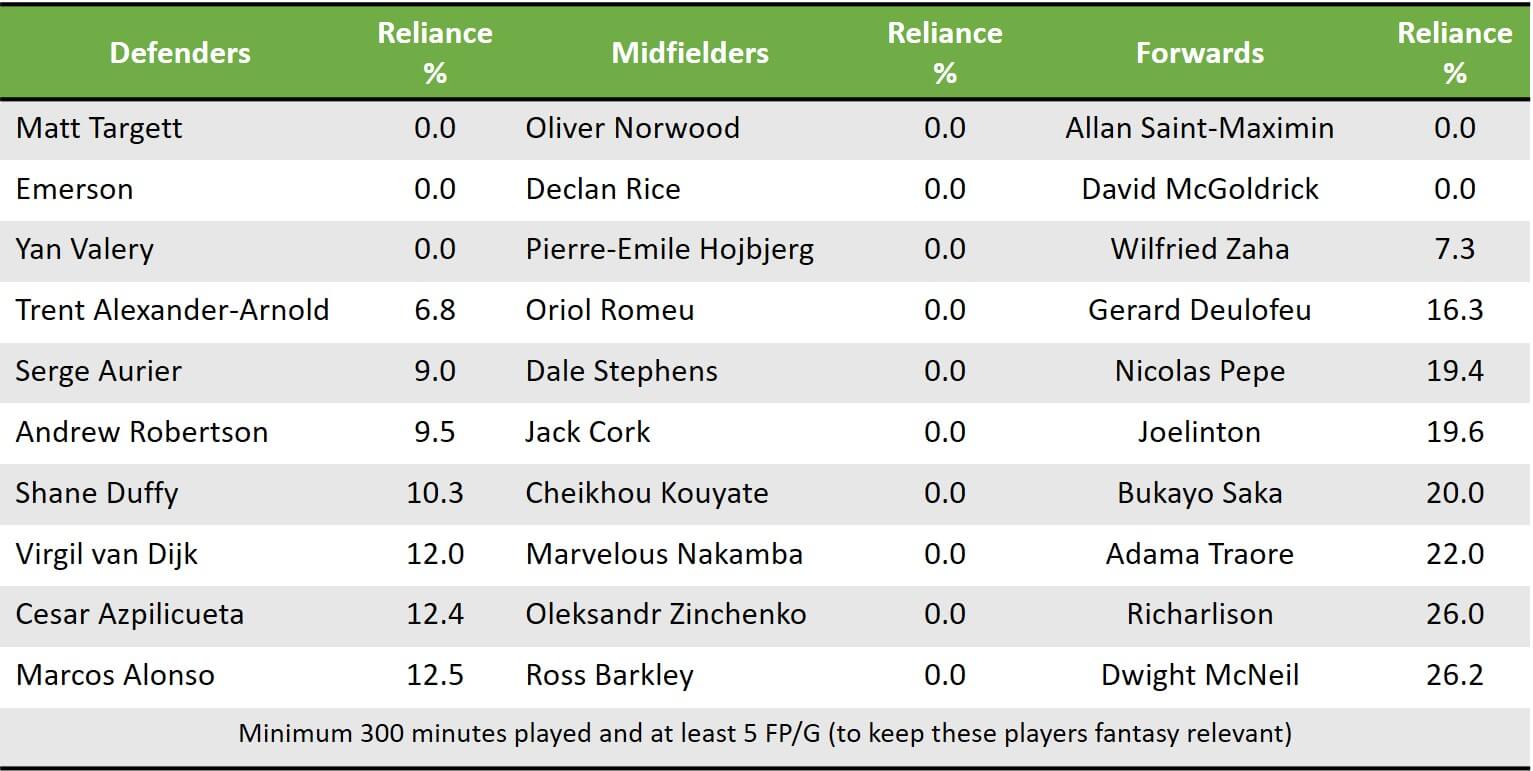 Liverpool has kept just two clean sheets this season, despite having the second-best defensive record in terms of xGA. If they can stop conceding the odd goal, the value of VVD and Robertson will rise significantly, whilst TAA…well, he might enter the KDB range. The right-back has 40 key passes this season…next most among defenders is Lucas Digne with 27. He also has the most accurate crosses (14) among defenders, though he is closely followed by two others on this list: Robertson (12) and Azpilicueta (11). Only Yan Valery has a FP/G below 7.4, so if you can somehow get your hands on some of these, you should be set for the foreseeable future.

We still have a bunch of midfielders who have played at least 300 minutes and have a FP/G above 5 points, despite not scoring or assisting once this season. Oliver Norwood’s underlying numbers deserve special highlighting: 19 interceptions (t-8th among midfielders), 18 key passes (t-11th), 14 aerials won (t-13th), 13 tackles won (t-19th), and 7 accurate crosses (t-3rd). He has an FP/G of 8.64…can you imagine what it would be if he actually got involved in the goals (as an owner, I have my fingers crossed!!).

Finally, there’s not a whole lot to like from the forwards list. Some have potential (keep reading to see one player to target) but only two (Richarlison and Traore) play for a team with above-average attacking play according to xG. That said, the FP/G’s of Deulofeu (8.36), McNeil (9.36), Richarlison (10.50), Nicolas Pepe (10.85), and Adama Traore (10.90) are good enough to make you wonder what might be if either they or their team, find some form.

If you’re a regular reader of my articles or follow me on Twitter, you’ll know that I tend to stick to numbers and data. However, that doesn’t mean I disregard the value of the eye test. And as a devoted armchair fan of Aston Villa, I can tell you that Guilbert passes that. He is the fifth-best player at the club (behind Grealish, Grealish, Grealish, and McGinn) and he’s also having a very nice fantasy season too with an FP/G of 9.28. His defensive underlying numbers are solid and he gets up the other end at a fair rate too.

It’s always important to check if a defender’s FP/G is inflated by a rare goal involvement or two (like with van Aanholt). Fernandez’s is. It’s also important, though, to check if a player’s FP/G is undervalued by a lot of short substitute appearances. Fernandez’s is. Long story short, the Newcastle defender’s 7.05 FP/G seems fair, and at 2% ownership with games against Bournemouth and Villa coming up, he could be a steal. He’s also managed six tackles, six aerials, and TWENTY-ONE clearances in the last two games, so there’s that.

The same names continue to be viable (though admittedly not great) options given their underlying numbers: Fleck, Propper, Norwood, Hojbjerg, etc. To provide something different, though, we’ll go with Pereira and Nakamba. Pereira is the greater risk here (game-time), but also has a higher ceiling – he’s playing very far forward and has taken 18 shots and had 11 key passes over his last 7 games. Now, if either he or a teammate could actually put the ball in the net, we could be looking at a double-figure return, something he hasn’t done since Gameweek 1.

Nakamba is the opposite of Pereira, with a fairly high floor for someone with 10% ownership, but limited opportunity to act as a goal threat given all of Villa’s other options. That said, he’s laid on a few key passes (5 in his last 5 games) to go with his defensive stats (13 tackles won and 11 interceptions in 7 games). I don’t imagine him bringing in 10+ points, but if you’re in a big league and need a 6-8 pointer to keep you ticking over then he should be considered.

So far I’ve tried to steer clear of some very good options that are being recommended elsewhere, but with such a small sample to choose from for the forwards, I’m going to have to break that rule. The one to target is Newcastle’s Saint-Maximin. This guy takes Newcastle from a one to a four on the “Exciting to Watch” scale. And he’s scoring nicely too – he has a 7.5 FP/G, but a PP90 of 12.08 and has hit double figures for three consecutive games – all without scoring a goal or assisting. The main reason for that? His 20 successful dribbles over the last 4 games…the rest of the Newcastle squad COMBINED have just 29 in the same time.

Arsenal’s 11th best attack takes on Leicester’s 3rd best defense on the road. Unless the only other forward options you have are Andy Carroll and Troy Deeney, this is where you do what is right and sit the Arsenal forward. Aubameyang’s points when he fails to score or assist? 4.5, 2, and 1.5. Less controversial is the idea of benching Tammy in Gameweek 13, when Chelsea visit the Etihad. The breakout star has rewarded faithful Fantrax managers, but almost exclusively in games against smaller teams. Against legit defenses (Manchester United, Liverpool, and Leicester) he scored -1, 4.5, and 3. I get that you don’t want to look silly if Tammy or Auba go and bring in 20+ points…but the numbers suggest this is unlikely, and there should be plenty of other players available which score higher than them in these two weeks. Fortune favors the brave.

So that’s your lot for this week’s underlying numbers. Take a look at Guilbert, Fernandez, Pereira, Nakamba, and Saint-Maximin, and if you own Auba or Tammy in Gameweeks 12 and 13, be brave enough to bench them. Next week the EPL Points Against returns. Note, all fantasy points numbers are based on the Togga-scoring format, whilst % ownership was correct as of Tuesday 22nd of October. Predominant sources used include www.premierleague.com, www.understat.com, www.sofascore.com, and www.whoscored.com. Follow me at https://twitter.com/the_innergeek.