Welcome to a new feature for Gameweek 13 of Fantasy EPL; Stats Corner! If you’ve ever read one of my articles, you will know that I love statistics. Statistics do not lie. The people interpreting them may do so (intentionally or accidentally), but the numbers themselves do not. We’re at a point now where trying to prevent the infiltration of data in football is about as successful as the Norwich defense trying to prevent an oncoming attack. So let’s embrace it. Statistics have helped Liverpool return to relevance and Manchester City assert their dominance, but more importantly, they could also help you win your fantasy football league.

Every few weeks – between the Underlying Numbers and EPL Points Against articles – I will bring you Stats Corner. In Stats Corner I will provide the latest breakdown of Points per 90 (PP90), Lost Points, and Expected Goals: Bookends Removed; three statistics that can help you in your quest for fantasy glory…and which can (probably) only be found here. Oh, and I’ll also pop in a bonus statistic just because it seems silly to not have a fourth one in an article named Stats Corner.

PP90 stands for ‘Points per 90’ and is simply the FP/G of a player if they were to play the full 90 minutes. By and large it is probably a better reflection of a player’s fantasy value than FP/G, which does not take into account how much of a game a player has played, only that they played. PP90 better appreciates the value of those players who do not always start. Knowing this can then give us an advantage on those occasions when they do make the starting eleven. 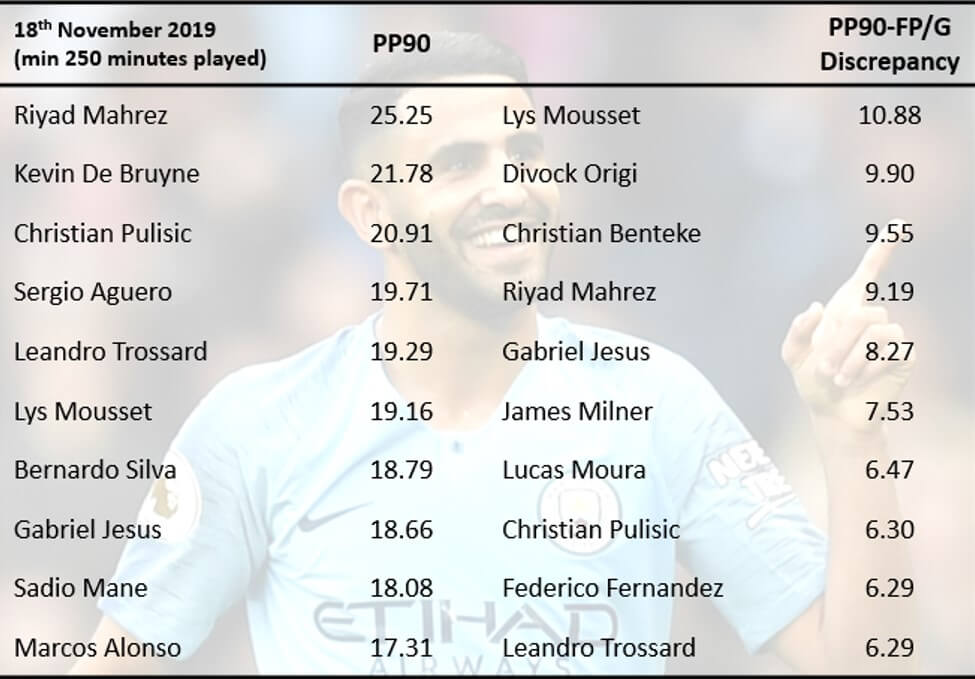 Mahrez may have been banished to the City wilderness in recent weeks, but he can take solace in the fact that his PP90 supersedes all others. A quick look at his scores when he does start should convince any owner that he’s one of the few players worth holding onto despite uncertainty over his place. Perhaps most relevant for the Fantrax manager are the players with the largest PP90-FP/G discrepancy. In particular, Lucas Moura could become an option. An unenlightened Moura owner may see the 5.25 FP/G and deem him expendable…but those who see his 11.72 PP90, combined with the changing of manager at Spurs, may see a great opportunity. Likewise, Trossard still may be going under the radar in some leagues given Potter’s careful reintegration of him back into the side following injury. His PP90 indicates a potential gem and his large discrepancy could similarly work in your favor in trade negotiations.

One of the many ways in which Fantrax EPL is the best form of fantasy football is in the types of scoring system that can be implemented, most notable of which is the Togga scoring system. Togga scoring allows for negative points – or Lost Points – and include dispossessions, cards, and own goals (note, they do not include goals conceded). Cards and own goals are relatively rare occurrences, and therefore knowing which players have FP/Gs that are skewed by such things could give you a leg up on the competition. 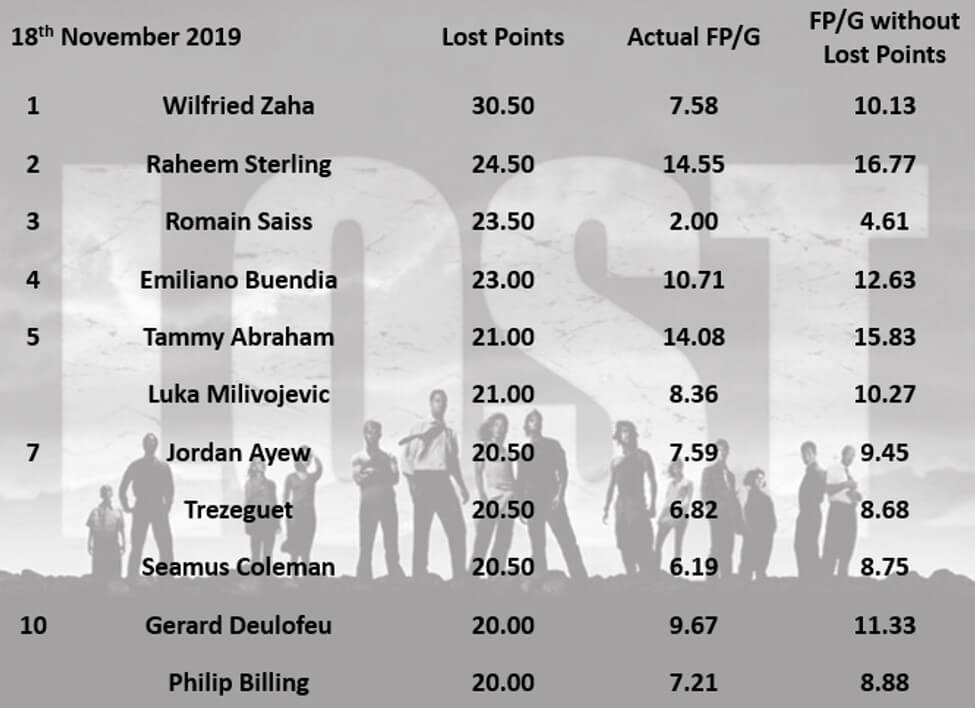 Zaha leads the way – and as Chuck Booth pointed out recently in a Tweet I can no longer find – it is likely things will stay that way all season. The Crystal Palace forward has 49 dispossessions – 9 more than any other player. This is a stable metric, characteristic of his style of play, and therefore shouldn’t be ignored. What should be ignored, though, are the red cards for Trezeguet and Coleman, and the own goal for Abraham. If the first two can become starters for their respective clubs then they become viable options, going from having a mediocre FP/G on the surface, to a decent FP/G if Lost Points are removed. Abraham is in a slightly different category in that he already has an excellent FP/G, but one that becomes even better without his Lost Points. Son Heung-Min (red card) and Lucas Digne (own goal) also fit into this, though they just missed out on making the top 10 for Lost Points. Whether the actual FP/G’s of these three are low enough to make them undervalued by their owners is a question for you to ask in your own league…

Expected goals is “a statistical measure of the quality of chances created and conceded” (Understat.com). Many football sources use expected goals tables as an indicator of which teams have the best/worst defenses and attacks. The problem I have with this is that every team in the Premier League has the capability to play excellently or atrociously on the odd occasion (the old “every dog has his day”/”it never rains but it pours” idioms comes to mind). Grouping such occasions into our sample of data distorts the final picture being presented. One simple way around this is to remove the bookends: the best and worst performances of each team during the season so far. For instance, Manchester City has an average xg of 3.13, but if you remove their best (6.63 vs Watford) and worst (1.48 vs Liverpool), then it becomes “just” 2.95. This is, in my opinion, gives you a better estimate of what to expect from an attacking perspective next time City play. 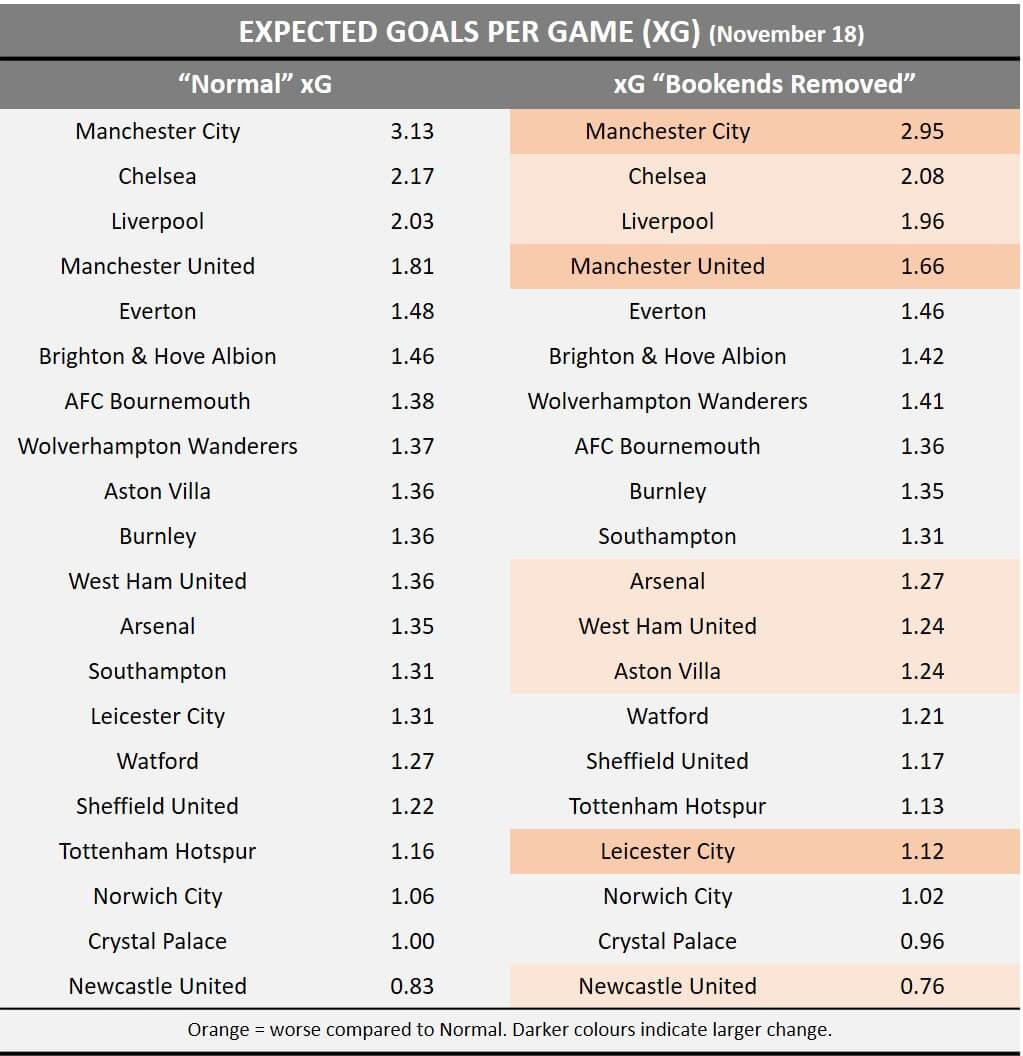 The “normal” xg’s cited by football sources are overplaying the attacks of both Manchester clubs and Leicester, though with City this is nitpicking at its finest: don’t rush off to trade KDB just yet! The Leicester numbers would concern me though, and it is difficult to weigh up whether it’s a case of “sell now” whilst they are overachieving, or “stick with it” because clinical finishers like Vardy do routinely outperform expected goals numbers (they are based on averages from historical data after all). Other than that, I would probably be most worried if I owned any of Villa’s attacking contingent. Their 5-1 demolition of Norwich has inflated their numbers disproportionately, and they are probably a below-average attack as opposed to the slightly above average one that most “normal” xg tables have them as. 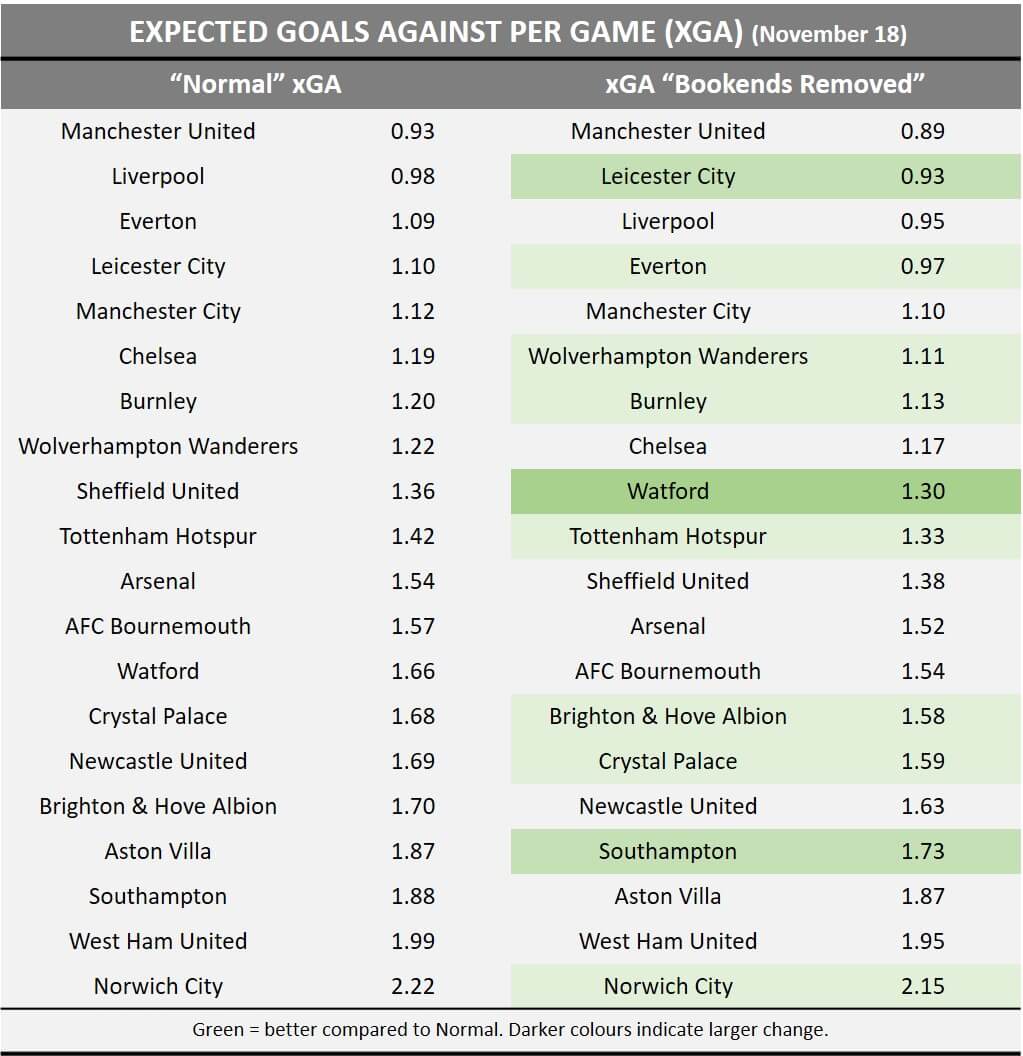 I have been saying for weeks now – based on xga: bookends removed – that Watford’s defense isn’t actually that bad, and it’s statistics like this which I think can be very useful from a fantasy perspective. Whilst everyone else was steering clear of the Hornets, these numbers indicated that good value could be found in the likes of Foster, Janmaat, and Kabasele. Value can still be found in these guys actually! Elsewhere, “normal” xga sources also underappreciate Leicester’s defense (though you’ll do well to pick one of those up) as well as Southampton’s (it’s still fourth-worst in the league though, so keep on avoiding it). Probably the most relevant, therefore, is Wolves’, which rises to 6th best in the league with bookends removed, and goes from 1.22 to 1.11 xga per game. Jonny and Doherty would be the best two options here, so you’ll need to cross your fingers that their owners haven’t noticed the uptick in their fantasy returns recently.

The inaugural analysis in the bonus corner looks at the correlation between ownership % and total fantasy points (as of November 18th). Only those who have played in at least 500 minutes of league games have been included. To help clarify, Kevin De Bruyne has been highlighted by the yellow dot – he has a 100% ownership and 212 total fantasy points. 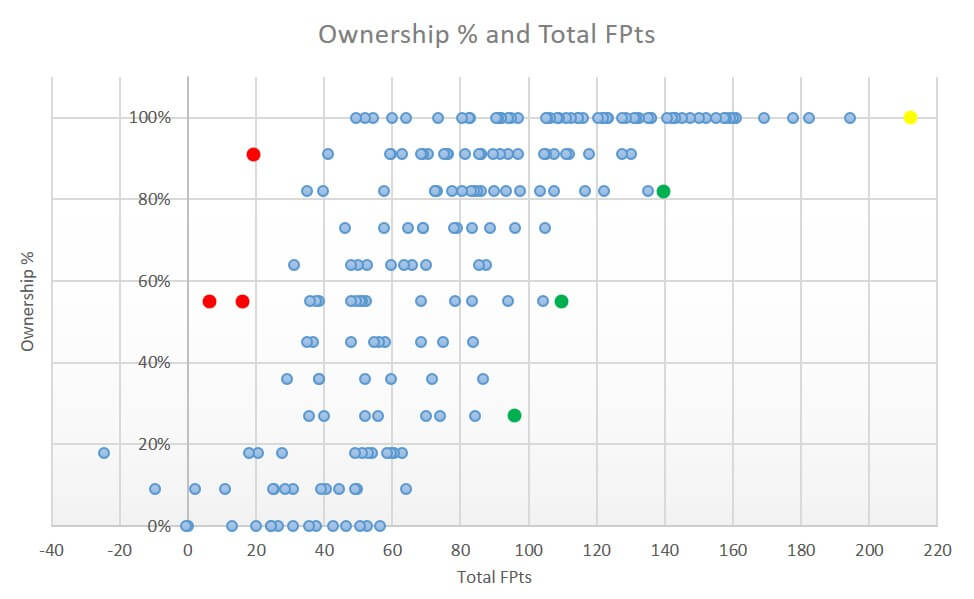 By and large, ownership % and total fantasy points correlate quite nicely. There are some exceptions though. The green dots on the right are players that are still massively under-owned, given their total fantasy points, whilst the red dots on the left are those who probably need to be dropped by a few people! Any ideas as to who they are? A free lifetime subscription for these articles awaits anyone who guesses all six (answers at the bottom of this page).

“The idea that I [should] trust my eyes more than the stats, I don’t buy that because I’ve seen magicians pull rabbits out of hats and I know that the rabbit’s not in there.” (Billy Beane; Moneyball)

Next week the EPL Points Against will return. Predominant sources used include www.understat.com (source for Expected Goals: Bookends Removed), www.premierleague.com, www.sofascore.com, and www.whoscored.com. Follow me at https://twitter.com/the_innergeek.