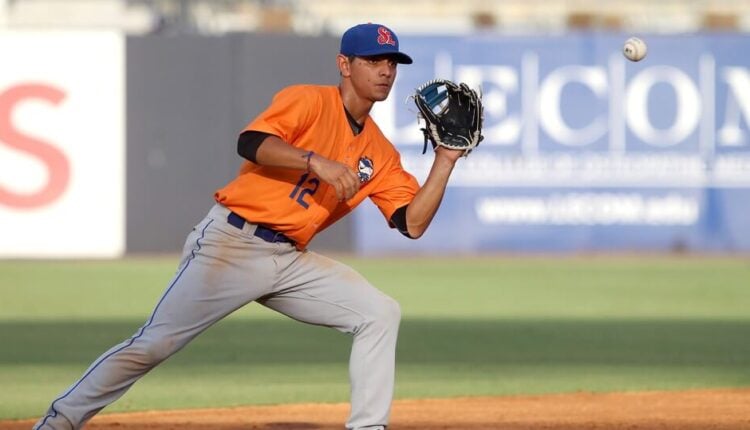 Often times prospects are like investing in stocks and Andres Gimenez much like Tesla has seen his stock go through some peaks and valleys. He was the talk of the prospect world before the 2019 season, he was a common target in dynasty trades because we saw him show the ability to steal bases and many projected power to come. Then the 2019 season happened, where the power sorta showed but he didn’t set the world afire and his stock plummeted in the eyes of many. We then got to see him at the highest level for 132 plate appearances and he showed some of the traits that made him desirable.

All that being said we are here to discuss what Gimenez can be for 2021 and going forward. We’ll go through the positives and negatives of his game to further parse out what he is and can be on your rosters and why you may or may not want to target him.

Andres Gimenez possesses the one thing many of us are chasing from hitters and that’s speed. He is a good base runner with good speed and a decent first step. He has been an efficient baserunner having 8 stolen bases and only being caught stealing once during his brief stint with the Mets. Throughout his minor league career, which hasn’t been as prolific as his major league sample size, he has stolen 93 bases and been caught stealing 46 times giving him a respectable stolen base percentage of 67%. His greatest asset, in the fantasy game, is his speed and how he translates his plus speed into stolen bases.

He combines that speed with a decent hit tool. In his short major league career, he is a .263 hitter and has hovered around a .270 hitter as a minor leaguer. In today’s game where strikeouts are not as discouraged, Gimenez keeps his strikeout rate around 21% which is more than palatable in today’s game. Andres Gimenez is best used as a traditional lead-off hitter where his solid bat-to-ball skills and speed can be unleashed. We are so used to drafting guys with speed that is a drain in other categories that is nice to have Gimenez where in AVG leagues he is an asset.

I don’t want to come across as harsh but Gimenez does have some warts in the profile that could make or break him for you. The first is the power output isn’t great, it is below average. He will likely never be even a 20 homer threat because the doesn’t generate a lot of power and does have a less than ideal ground-ball rate. Andres Gimenez has 22 homers in 1657 plate appearances throughout his minor league career. He hasn’t hit for any substantial power at the major league level either having 3 homers in 132 plate appearances in 2020.

Not only do the home run totals leave something to be desired but looking at his SLG% of his career it tells us this isn’t a power threat. At no stop after his 2018 stint in High A has he posted a SLG% above .400. Even going through the Statcast data he didn’t show any substantial power, only having 3 barrels in 91 batted ball events. He might run into a couple of homers but expecting anything more than 15-18 in a good year for him might be a stretch.

Another weakness in Andres Gimenez’s game is his suboptimal walk-rates. Since the 2017 season, all of his walk-rate has been 8% at every stop. In the majors, he has a walk rate of 5.3% which hurts him in any OBP, OPS style league. He is a player that is very much format-specific in fantasy leagues which we will talk about here soon. While Gimenez has never posted gaudy strike-out totals he also doesn’t walk at a high clip which hurts the profile going forward.

Why You Should or Shouldn’t Target Andres Gimenez?

So to answer the above question, I do think Gimenez is very format dependent and team dependent. He was once a highly thought of fantasy prospect who is more than likely just a middle infield contributor for your team. In any sort of “standard” 5×5 roto league or even some point formats, he is the perfect middle-infield option. If you get enough power from your SS or 2B and need some speed Andres Gimenez is the perfect solution to that problem on your roster. Where if you play in any OBP or OPS format he gets bumped down because of his lack-luster walk-rates and lack of significant power.

I would not advise building around Andres Gimenez in your dynasty leagues but he is a quality contributor. He isn’t someone you want as your SS but as a decent MIF or even 2B, because the position is so weak, he should be solid for you. We all know speed is at a premium these days and if you ignore it early in your drafts you can swing by and pick up Gimenez to add some stolen bases for you late in your drafts.

So if you know your league settings and understand that Andres Gimenez is league specific you could have a valuable asset on your hands. There are ways in which you can construct your roster that will allow Gimenez’s strengths to be an asset for you just you have to be realistic with the clear negatives in his game, if you do so you will be one step ahead of your league mates.