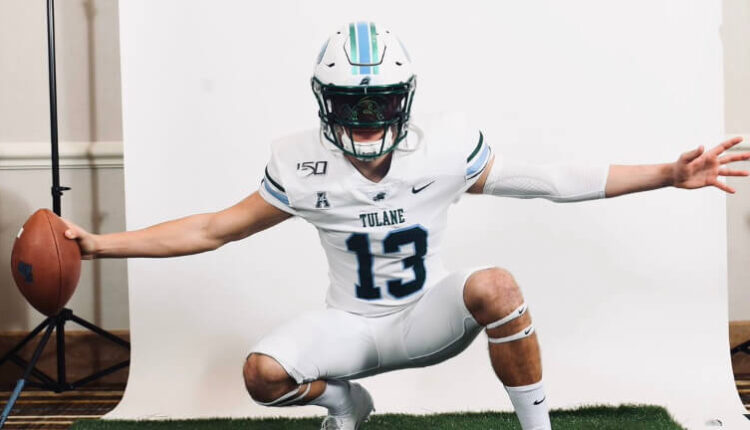 As I sit down to compose the Waiver Wire Gemstones article, I am still in shock that Kansas State and Mississippi State upset Oklahoma and LSU respectfully on the road. College Football continually provides a page-turner every weekend, and College Fantasy Football is the best way to get into the action. Every week, CFF Diehards must blitz the waiver wire and upgrade the depth on their rosters. Eric Froton and I identify the top players to acquire in leagues this week.

Also, check out last week’s College Fantasy Football Waiver Wire to see if any of those players are still available.

The three-star freshman from Boca Raton, FL ranks as the 47th best QB prospect from the 2020 recruiting class. Pratt was offered scholarships by several Group 5 programs including Toledo, FAU, Western Michigan and Kent State, but opted to spurn the mid-west for New Orleans.

Heading into fall camp as a true freshman with no spring practice to acclimate to the college game, Pratt was thought to be well behind former Southern Miss transfer Keon Howard. A former top-50 QB recruit himself, Howard spent 2019 as Justin McMillan’s understudy in preparation for him taking over this year. Reports quickly surfaced that Pratt was giving Howard a run for his money; however, he ultimately lost out to the more experienced senior.

Howard led Tulane to a narrow 27-24 victory over South Alabama, but hit only 14-of-30 passes for 191 yards, a 0:0 TD:INT Ratio and 31 rushing yards. The performance was good enough to keep the starting job until Week 2, when Howard led a second-half implosion in which Tulane blew a 24-0 halftime lead, eventually losing 27-24 to AAC rival Navy.

Clearly, coach Willie Fritz was nonplussed by Howard’s collapse as he was pulled from last weekend’s game against Southern Miss after starting out 1 for 3 for zero yards. Pratt entered and proceeded to lead Tulane to a 66-24 destruction of the Golden Eagles. Pratt had some accuracy issues, but still hit eight of 18 passes for 142 yards and a 2:0 TD:INT Ratio, also chipping in 7 carries for 40 yards and a touchdown on the ground.

He showed impressive touch on his deep-passes, dropping a room-service 42-yard sideline bomb in the waiting arms of receiver Jha-Quan Jackson for his longest completion, displaying the kind of big-play ability that eluded his predecessor. Pratt is worthy of a roster spot in 14-team seasonal leagues and should be rostered in most Dynasty leagues since the true freshman showed real talent in his first extended game action.

On one of my CFF teams, both Clayton Tune, Houston and Hendon Hooker, Virginia Tech were unavailable, and I needed to scan the free-agent pool for an emergency starter. A competitive league, there were very few options. I took a flier on Zac Wilson, and when I awoke, I felt like a lost treasure hunter finding gold bullion in the deep sea.

Behind a high-octane aerial assault, BYU dismantled the Trojans 48-7. Wilson, who delivered a career-best outing, passed for 392 yards and a pair of touchdowns. As an added bonus, he rushed for two scores, producing 38.7 fantasy points. “I think Zach’s leadership is starting to show—he had a great offseason. He’s throwing the ball really well and he’s seeing things really well. There is still room for improvement and I know Zach will think that this isn’t good enough,” coach Kalani Sitake stated (byucougars.com).

I’m old enough to remember when BYU produced All-American quarterbacks nearly every season: Mark Wilson, Jim McMahon, Steve Young, and Ty Detmer, who captured the 1990 Heisman Trophy. In 2014, I even saw former BYU star Taysom Hill demolish the UConn Huskies at the Rent, logging five total touchdowns. It has been a while since an alternative-reality star called signals in Provo, Utah.

A junior, the 6’3” and 210-pounder played in 18 games during his first two campaigns on campus. He completed 23 touchdowns and passed for 3,960 yards. He is also an underrated runner with 388 yards on the ground and five touchdowns.

The Cougars are unbeaten and ranked in the Top 25. In the next two weeks, BYU hosts Louisiana Tech and UTSA and both contests are favorable matchups for the Cougars’ offense. Wilson has opened the season hot, and I am jumping on the bandwagon.

On the CFF Waiver Wire, Who Ya Got at QB?

Syracuse’s rushing output in their season-opening 31-6 loss to UNC was a paltry 68 yards on 35 attempts. Scat-back who was miscast as the Orange’s RB No. 1, Jahwar Jordan, proved ill-equipped for every down work, logging 14 totes for 26 yards. Their Week 2 rushing numbers in a 21-10 loss to Pitt was even worse, amassing only 51 yards in 34 carries. Again, Jordan underperformed, rushing 13 times for 40 yards.

In the practices leading into last weekend’s tilt against Georgia Tech, coach Dino Babers made the switch and inserted the true freshman Tucker into the starting RB role. The difference was stark as Tucker rushed 24 times for 112 yards and two touchdowns, paving the way for a convincing 37-20 win over the Yellow Jackets.

Tucker displayed a toughness that Jahwar Jordan simply does not possess, salting the game away in the second half after ‘Cuse opened up a 30-13 lead.  His rushing acumen allowed Syracuse to keep GT off balance, opening up passing lanes for beleaguered starting quarterback Tommy DeVito, who looked like a college caliber signal-caller for the first time all season.

Tucker is a top-100 caliber running back recruit from the 2020 prep class. His time has arrived, and he has nobody behind him that is a challenge to his RB1 status. He should be treated as a Dynasty golden nugget and a priority seasonal add in all formats.

I watched both Kansas State games against Arkansas State and Oklahoma, and Deuce Vaughn jumped off the TV screen with fence clearing home runs. After two games, he has catapulted among the top freshman in the nation.

A football junkie, Vaughn was raised in a gridiron family. His father coached at Arkansas, Mississippi, Memphis and Texas. Currently, his Dad is a scout for the Dallas Cowboys. As a high school recruit, 247Sports listed Vaughn as the 17th best all-purpose runner in the country after accumulating 5,472 all-purpose yards and 50 touchdowns.

Against Oklahoma, Vaughn totaled 174 yards from scrimmage and a touchdown on 12 touches. He finished the weekend among the Top 12 fantasy runners with 25.4 points. Against Arkansas State, he earned 12 carries and rushed for 47 yards and a touchdown, becoming the first true freshman in the program’s history to score in a season opener. He added a 24-yard catch.

“I went to bed dreaming about scoring my first touchdown. It’s surreal. When I got the opportunity and got in the end zone, I didn’t know what to think. It was like monkey brain. I’m just so excited and looking forward to doing it over and over again.” Vaughn said after the game versus the Red Wolves (kstatesports.com).

College Fantasy Footballers are just as excited as Vaughn that he has reached the promised land in back-to-back contests. Do not wait for league mates to catch up with Vaughn’s ascendance as a viable starter. The Wildcat’s freshman is a must obtain playmaker this week.

While researching for my DFS Fantastic Four last week, I looked long and hard at the Kansas-Baylor matchup for value plays. While the Bears do employ a running back by committee approach, I decided to recommend Trestan Ebner as a value play because of his role as an all-purpose playmaker…Bazinga!

On Saturday night, Ebner scored four touchdowns against the Jayhawks. He became the first player in Big 12 history to score touchdowns on a run, reception and return (two) in the same game. He amassed 272 all-purpose yards and illustrated his high-ceiling potential in college fantasy football.

“When you watch Ebner in practice, he’s explosive and a team player. You think of somebody that provides energy and juice to our team, toughness to our team. Those are all things that showed up in those returns. Hitting those holes and those seams the way he did is really what set those up, and to have the finishing speed to close it off, those are things I’ve seen on tape. To see it out on the grass was pretty cool,” coach Dave Aranda proclaimed (baylorbears.com).

During his first three seasons on campus, the Senior logged 73 receptions for 932 yards and six touchdowns. He also gained 784 rushing yards with six scores. If a CFF diehard needs a running back, Ebner provides a nice option this week.

On the CFF Waiver Wire, Who Ya Got at RB?

At press time, I’m still mad that Mississippi State listed Osiris Mitchell as a co-starter at the Z-position last week. I left Mitchell on my bench in two leagues and missed out on his spectacular performance.

Nevertheless, when I scanned the waiver wire Sunday morning, I noticed that the Mississippi home run hitter remained available in over 60% of leagues. Without question, Mitchell should be the most sought-after pickup this week.

At 6’5” and 210-pounds, the Senior began the upcoming crusade with 60 catches for 908 yards and 10 touchdowns. He defeats opponents with athleticism and strength and owns deceptive speed to attack the defense vertically. I am inserting Mitchell into both lineups for the remainder of the season and crossing fingers that the fantasy gods smile upon my rosters and bestow a much-needed gift this week.

BYU star tight Matt Bushman led the team in receiving in 2019 with 47 receptions for 688 yards and four touchdowns, while Romney acted as a reserve wideout posting a line of 31 for 377 and 2. Unfortunately, Bushman tore his ACL in the summer and suddenly the Cougars were forced to enter the season without any of their top-four wide receivers from last year.

Having watched a fair amount of BYU as a part of my Rotoworld game-day duties, I was struck with how effective Gunner Romney performed despite his relatively low snap-count. He’s got good size for the position at 6’3” and 194-pounds and a quarterback with legitimate pro potential in Zach Wilson. With such an inexperienced receiver corps, I felt Wilson would lean on a rising-talent like Romney.

In their inaugural game of the 2020 season, BYU eviscerated Navy to the tune of 55-3. Gunner proved up to his name as he caught 4 passes for 134 yards and a touchdown as he ripped the top off of the Navy secondary. He even improved on that performance against perennial G5 bowl team Troy, recording five catches for 138 yards and an absurd 27.6 YPC. He even should have had a touchdown in the contest, but in the process of making an acrobatic contested-catch down the seam on a 52-yard pass he landed inches before the goal line.

I’m willing to bet Romney will reach the end-zone again this week when the Cougars welcome Louisiana Tech to Provo next Friday. BYU has a parade of Group 5 opponents that they should crush. They should score 35-plus ppg., and Romney will have every week starter appeal as the WR No. 1 for a top-15 offense.

On the CFF Waiver Wire, Who Ya Got at WR?

Identify the most shocking upset in College Football yesterday: