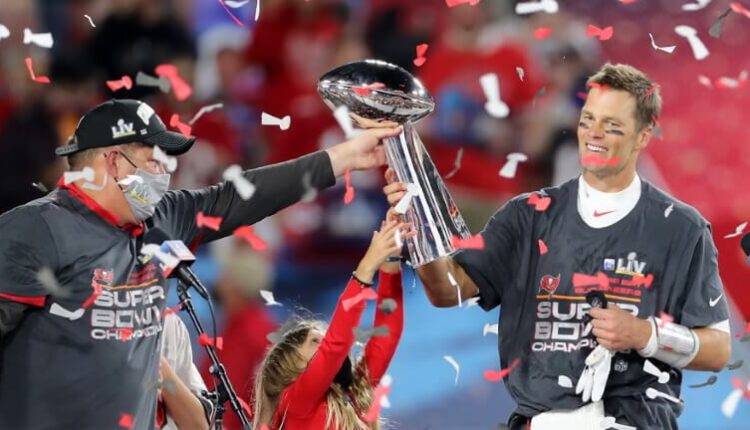 So who are some players who could be fantasy football league winners in 2021? I’ll share a couple of quarterbacks currently being drafted outside of the top 10 who could end up producing as elite fantasy scorers at their position. These are players I’m generally willing to reach for above ADP to ensure that they end up on my rosters. You can also check out my league winners at running back, wide receiver, and tight end.

For instance, take Josh Allen and his finish as the top-scoring fantasy quarterback in 2020. He had a career year as a passer, but his 421 yards and eight touchdowns on the ground provided an extra 90.1 fantasy points, equivalent to an additional 360 passing yards. And although Allen struggled as a passer in 2019, his 510 rushing yards and nine rushing touchdowns still vaulted him into finishing as the No. 6 fantasy quarterback that season.

So why are we talking about Tom Brady when the 44-year-old veteran finished with just six rushing yards last year and just 34 rushing yards in 2019? The reason is that truly elite passing production can overcome a lack of rushing production for fantasy quarterbacks. Some will argue that the Buccaneers’ elite defense will result in more runs in 2021, limiting Brady’s passing upside. Detractors are also quick to point out that Brady’s 6.6 percent passing touchdown rate last season was the third-highest of his career, and even that resulted in him finishing as just the No. 8 fantasy quarterback.

Let’s first dive into concerns about passing volume. Bruce Arians has always led pass-heavy offenses that attack vertically. Since joining Tampa Bay as the head coach, the Buccaneers have ranked 10th in pass rate in 2020 with Brady, and seventh in 2019 with Jameis Winston, despite their defense ranking fifth and sixth in DVOA those seasons, respectively. Even dating back to 2017 in Arians’ final season in Arizona, the Cardinals ranked eighth in pass rate despite ranking third in defense, and that was with an aging Carson Palmer and the bumbling pair of Blaine Gabbert and Drew Stanton at quarterback. There should be no doubts about Tampa Bay’s offense centering around Brady’s arm once again for 2021.

As for touchdown rate, many factors impact that, and it can certainly be a fickle number. However, how often a team passes when close to an opponent’s end zone at least gives us an idea of which teams could pass for a higher number of touchdowns compared to their rushing touchdown total. In 2020, Tampa Bay ranked sixth in red-zone pass rate and fourth in pass rate inside an opponent’s five-yard line. The Buccaneers’ tendency to pass the ball at a high rate both overall and as well as in scoring range alleviates worries about both pass volume and touchdown rate.

Now let’s delve into less objective measures. It’s anyone’s guess as to when Brady will retire, as he’s already defied all odds against Father Time after winning a Super Bowl at age 43. But at some point, his play will drop off even accounting for his meticulously strict diet and training regimen. It’s fair to wonder whether 2021 could be his final season, and if that’s the case, maybe — just maybe — Brady will be gunning for Peyton Manning‘s single-season passing records.

With the NFL expanding the regular season to 17 games for the first time in 2021, Manning’s single-season records of 5,477 passing yards and 55 passing touchdowns are more within reach than in years past. A back-to-back Super Bowl win is the top priority, but one final record-breaking MVP season is a distinct possibility for Brady playing behind a top-five offensive line and with an arsenal of Pro Bowl-caliber pass-catchers like Mike Evans, Chris Godwin, Antonio Brown, Rob Gronkowski, and plenty of depth at wide receiver and tight end behind them. No one should be shocked if Brady wins a final MVP award at age 44, and if that happens, he’ll be among the top league winners in fantasy as well even if he were to rush for negative yardage.

All the way at the other end of the spectrum from a 44-year-old pocket quarterback is 21-year-old dual-threat rookie Trey Lance. There are fair concerns about Lance, as we’ve only really seen one full season of college production from him, and Lance hasn’t played significant snaps in nearly two full years. On top of that, it’s a mystery as to if or when Lance will start any games for the 49ers in 2021 with Jimmy Garoppolo still the starter until further notice. So why take a risk on the rookie who may not see significant playing time until 2022?

Let’s examine the odds of Lance starting at some point in his rookie season as well as what kind of production to expect if/when he becomes the starter. Garoppolo has struggled with decision-making and accuracy, and he’s a tepid downfield-passer. Supporters of the incumbent starter point to his strong 2019 campaign en route to the Super Bowl, but even that year, Garoppolo barely eclipsed a 2-to-1 touchdown to interception ratio, and his 6.5 air yards per pass attempt (IAY/Att) ranked third-lowest among quarterbacks, relying instead on his receivers to gain yards after the catch in Kyle Shanahan’s scheme.

Few believe that Garoppolo will be a starting quarterback in the NFL for much longer, but there’s a narrative that the 49ers can win games and be playoff contenders with the veteran, which is true. San Francisco’s strength of schedule is among the easiest in the league this year, and they face three teams with middling to below-average secondaries to start the season in Detroit, Philadelphia, and Green Bay. However, how long will Shanahan continue trotting out Garoppolo if they win in spite of his mediocre play rather than because of it?

Training camp narratives are mostly overblown, but when a team has traded up to no. 3 overall to draft a replacement at quarterback, camp performances bear closer scrutiny. Poor performances by the incumbent starter should be noted. It should also be noted that while the learning curve is steep for any rookie quarterback, Lance’s traits and experience are an ideal scheme fit with Shanahan, which could ease his path to the starting job. I am of the belief that Lance will win the starting job sooner rather than later and perhaps even start in Week 1.

So what could we expect from Lance as a fantasy quarterback if/when he was to start? Despite needing to develop as a passer, Lance will be playing behind a top-10 offensive line and can get help from a trio of yards after the catch playmakers who are among the best in the league in George Kittle, Deebo Samuel, and Brandon Aiyuk. Lance has more of an ability to threaten defenses deep than Garoppolo, but he can also rely on shorter passes if necessary as Garoppolo traditionally has done.

And regardless of Lance’s progression as a passer, his mobility can stress defenses in ways that Garoppolo can’t and open up Shanahan’s playbook even further, as Robert Griffin III did as a rookie in 2012. Being able to offer such a dynamic addition to an already efficient offense could be the difference-making factor that elevates Lance atop the depth chart. Speaking of Griffin, he was the No. 3 fantasy quarterback in points per game as a rookie primarily as the result of running for 815 yards and seven rushing touchdowns.

While that was an era with fewer running quarterbacks, there’s every reason to believe that Lance’s rushing production could still push him into the top-five fantasy quarterbacks in points per game even with uninspired passing production. After all, this is a mobile quarterback who ran for 1,100 yards and 14 rushing touchdowns as a sophomore at North Dakota State. If Lance were to start all 17 games, a 1,000-yard rushing season isn’t out of the question for the rookie.

The potential for Lance to produce similar rushing numbers as Lamar Jackson or Kyler Murray but with an ADP six or more rounds later makes him among the most exciting league winners at the quarterback position. Even in 1QB leagues where’s it’s generally ill-advised to roster two quarterbacks, I’ll be willing to stash Lance on my bench rather than see him on the opposing team scoring 35 points against me in the fantasy playoffs.

Pitching Prospects on the Rise in Dynasty Leagues: National League

MLB DFS Look Ahead: Stacks and Fades for August 13-15