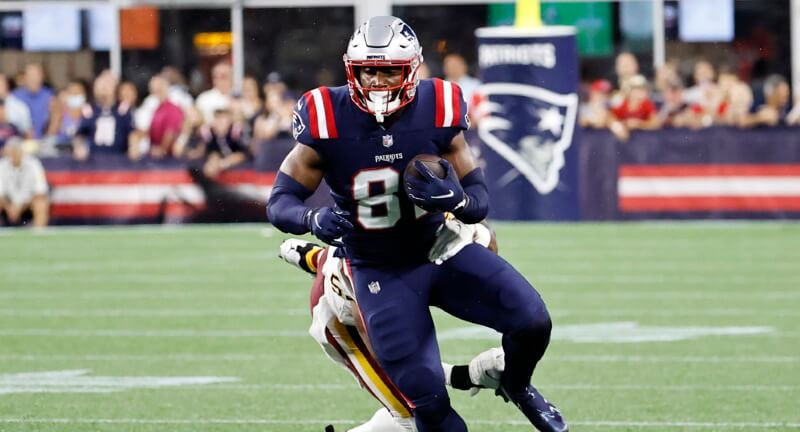 So who are some players who could be fantasy football league winners in 2021? I’ll share a couple of tight ends currently being drafted outside of the top 10 who could finish as mid-range TE1s. Tight end is pretty messy beyond the top six, so it’s not advisable to reach for these players, but their upside is higher than other late-round options. You can also check out my league winners at quarterback, running back, and wide receiver.

There was some excitement beginning to grow around Jonnu Smith earlier this preseason, but a recent ankle injury has derailed that hype train. A preseason injury is never good news for any player, but the silver lining here is a depressed ADP for Smith, which has currently settled in the 12th round.

Luckily, as of now, reports are that the ankle injury Smith suffered this preseason isn’t considered serious. So what indicates that Smith could be among the league winners at tight end this year if fully healthy? For one thing, there’s the glowing praises afforded to him over a year ago by a usually crotchety Bill Belichick who rarely speaks more than he has to at press conferences. The Patriots’ head coach stated back in 2020:

“He’s just a really good tight end…He can do a lot of things: blocks well, runs well, is a good receiver. I mean, hell, they played him at tailback. He looked pretty good back there. So, he’s a very athletic player, hard to tackle, catches the ball well. He’s great after the catch — probably the best in the league. I mean, I can’t imagine anybody better than him after the catch.”

Belichick’s comments foreshadowed an eventual four-year, $50 million deal in free agency this offseason, and as usual, Belichick has it right. As a receiver, Smith is a yards-after-the-catch playmaker. His 5.8 yards after the catch per reception (YAC/R) ranked fifth among tight ends in 2020, which was higher than both Travis Kelce‘s 5.6 YAC/R and Darren Waller‘s 5.3 YAC/R. And in 2019, Smith’s 7.8 YAC/R ranked second-best among tight ends behind only Noah Fant.

It doesn’t hurt either that Smith could see the occasional rushing attempt out of the backfield as well, as he’s been utilized in a variety of ways at training camp. Belichick’s seemingly offhand comment in passing years ago has worked its way into the playbook. Tight ends are often dependent on touchdowns for fantasy scoring, so any potential red zone carries for Smith only adds to his potential fantasy ceiling.

Some are concerned about the presence of Hunter Henry, who the Patriots also signed in free agency to a three-year, $37.5 million contract. But the tandem of Smith and Henry should be on the field together often barring injury, with New England projected to use plenty of 12 personnel in 2021.

Last year, New England’s usage of 12 personnel ranked dead last in the league, having utilized two-tight end sets on just two percent of their offensive snaps. However, that should change drastically this coming season. Belichick is infamous for crafting a game plan around the team’s strengths, and tight end talent clearly wasn’t among them in 2020. The Patriots’ tight ends consisted of journeyman Ryan Izzo and a pair of disappointing, wasted 2020 third-round draft picks, Devin Asiasi and Dalton Keene.

And with uninspiring options at wide receiver consisting of Nelson Agholor and Jakobi Meyers, both Smith and Henry figure to be integral pieces to the passing offense this year. Henry has upside as well, but Smith is the better option considering his athleticism and yards after the catch ability. It’s a long shot for any tight end outside of the elite three to be league winners in fantasy, but Smith has the talent to come close if New England gets him in space and gives him plenty of red-zone opportunities.

There was plenty of preseason hype in 2020 about a potential breakout from Blake Jarwin, but now he’s being all but forgotten in fantasy drafts just one short year later, often going undrafted in shallower leagues. There’s a good reason many refer to the NFL as the “Not For Long” league. Dalton Schultz was a serviceable replacement last season after Jarwin tore his ACL in Week 1, so can Jarwin return to fantasy relevance in 2021?

Last year, Dallas used 11 personnel on 71 percent of their offensive snaps, which ranked eighth-highest in the league. This makes sense, as the Cowboys boast one of the best trios of wide receivers in the NFL in Amari Cooper, CeeDee Lamb, and Michael Gallup. They would be foolish in not having all three on the field as much as possible, but with Dallas rarely utilizing two-tight end sets, whichever of Jarwin or Schultz wins the starting job will be crucial in their efforts to provide fantasy value this season.

But even with their talented trio of wide receivers, there is room for fantasy relevance for whichever tight end wins the lead role. In 2020, Dallas ranked 12th in pass rate, and when Dak Prescott was healthy in the first five games, they ranked second in pass rate, passing on 66 percent of their offensive snaps. Much of this was game-script driven, as the Cowboys ranked 21st in pass defense last year.

While Dallas used their first six draft picks in the 2021 NFL Draft on defensive players, they just missed out on two priority targets. Micah Parsons was a nice consolation prize, but Jaycee Horn and Patrick Surtain were selected with the two picks directly before the Cowboys’ original pick in the first round. Both players would’ve made an immediate impact on the secondary. There’s still optimism that new defensive coordinator Dan Quinn can turn this defense around, but it’ll be a work in progress at best in his first season with the team.

The Cowboys still project to be among the most pass-heavy offenses in the league in 2021 to keep up in high-scoring games. Even with high target shares for the wide receivers, the starting tight end could still be quite productive for fantasy. Dallas ranked 22nd in tight end targets in 2020, but in Weeks 1 through 5 when Prescott was healthy, they ranked 11th in targets to tight ends. In fact, Schultz’s 31 targets over that span was the seventh-most among tight ends.

However, although poor quarterback play was a detracting factor after Prescott’s season-ending ankle injury, Schultz wasn’t particularly efficient as a receiver last year. His 9.8 yards per reception in 2020 ranked just 28th among tight ends, and his 1.16 yards per route run (YPPR) ranked 31st. Schultz provides value as a strong blocker, but if fully healthy, Jarwin will be the more dynamic receiving option between them on passing plays.

Despite seeing limited action behind Jason Witten in 2019, Jarwin was efficient with his targets. That season, his 11.8 yards per reception ranked 12th among tight ends, and his 2.37 YPPR ranked eighth. While these were far from elite numbers, those strong efficiency metrics were enough for the Cowboys to give Jarwin a four-year, $22 million contract extension last offseason to be their starter.

Jarwin is still working back from the ACL recovery, but with Schultz currently out with a minor ankle injury, the door is open for Jarwin to see reps with the first team and solidify his position atop the depth chart. And though it sounds like Cooper should suit up for Week 1 even with some lingering ankle irritation after his surgery in January, there’s a heightened risk of Cooper missing time this season. In that scenario, the starting tight end would have opportunity for added target share.

Monitor the Cowboys’ tight end battle over the next couple of weeks. If Jarwin wins the starting job, he could be among the league winners at tight end this season. He’s a cheap tight end to target in the final round or two of drafts, and even in shallower bench formats, he should at least be placed on watch lists.