Pitching Prospects on the Rise in Dynasty Leagues: National League 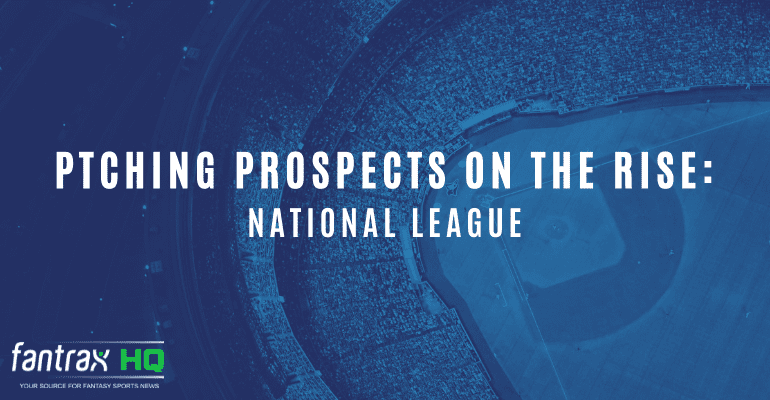 Welcome to my third installment of this series where I will be discussing five pitching prospects on the rise in the National League that I’m targeting in dynasty leagues. There were plenty of names to pick from in a year full of breakout prospects, but somehow this ended up being a lovefest for two organizations in particular. I’m sure you can figure out which two I’m talking about.

Also, make sure to check out the Fantrax Toolshed podcast weekly for more dynasty and prospect talk.

Pitching Prospects on the Rise in the NL

In the world of pitching prospects, Eury Perez is creating more buzz than just about anyone. The 18-year-old Dominican right-hander has taken the prospect world by storm this season, displaying skills and qualities rarely seen in an 18-year-old in full-season affiliated ball. In fact, Perez was barely 18 when the minor league season started. In 14 starts, Perez has a stellar 1.71 ERA, 0.95 WHIP, 9.5 BB%, and 36.7 K% across 52.2 innings. Perez simply looks too damn good for the level despite being one of the youngest players in it.

Would you like an easy way to get excited about Eury Perez? Peep this ⬇️

1.29 ERA in 14 IP so far for the youngest player in Low-A Southeast. #JuntosMiami pic.twitter.com/zR6DwzOPDT

When you watch Perez pitch, a lot stands out. First and foremost, he toes the rubber at a towering 6’8. He features a plus fastball in the mid-90’s with good shape to it and offsets that with an upper-70s curve that has a ton of vertical break, and an upper-80s changeup that he’s already shown a solid feel for. The changeup is behind the fastball/curve combination but Perez is in one of the best organizations for pitching development and changeup development which gives me plenty of confidence here with Perez. He’s an arm that I already put inside my top-100 but I guarantee you can get him for a much lower price tag than that right now in dynasty leagues. Buy, buy, buy!

When the Los Angeles Dodgers traded Josiah Gray in the Max Scherzer and Trea Turner deal, some said that they traded away their best pitching prospect. Gray is a very good arm, but I’d personally give that title to 23-year-old Ryan Pepiot. The right-hander from Butler has broken out in a big way this season, earning a recent callup to Triple-A just last week. His first two starts at the level have been so-so, but Pepiot dominated in Double-A with a 2.87 ERA, 0.94 WHIP, and a 33.2% strikeout rate.

What stands out about Pepiot’s arsenal is his plus to double-plus changeup in the low-80’s that features 10+ mph of velocity separation and strong sinking and fading action. You could even make a case for Pepiot’s changeup as one of the top few in the minor leagues. But he’s far from just a pretty changeup. Pepiot also has a low to mid-90’s fastball with good shape and a pair of breaking balls that both can flash above-average. One area that does need improvement is his strike-throwing, but Pepiot is definitely a name on the rise that has just entered my top-100 overall prospects.

Eury Perez isn’t the only Miami arm flying up rankings. Southpaw Jake Eder is as well. Yes, Eder might not be quite as flashy or buzzy as Perez, but he’s been carving up minor league hitters all season. The Marlins selected Eder out of Vanderbilt in the 4th round of the 2020 draft and started him at Double-A Pensacola this season. Eder wasn’t phased in the slightest by the aggressive assignment and currently has a 1.86 ERA, 0.99 WHIP, 9.1% walk rate, and 34.7% strikeout rate through his first 14 starts.

Similar to Perez, Eder’s bread and butter is his fastball/curve combination with the curveball easily grading as plus, thrown in the upper 70’s with good shape and a high spin rate. The fastball, while effective, isn’t quite as impressive, but still is an above-average offering in the low to mid-90’s with solid armside life. Eder also will mix in a serviceable changeup as well and has demonstrated at least average command and control. Due to the fact that he wasn’t a big name coming out of college, Eder is someone you can still get for a very reasonable price in dynasty leagues right now, or potentially pick up depending on the depth of your league.

Going a bit deeper into my rankings, Landon Knack is an arm that is impressing me this season. He still sits outside my top-300 but was outside my top-400 when the season began and has been steadily rising all season. With all the pitching talent and depth in this Dodgers organization, Knack does feel buried with no light at the end of the tunnel. However, that’s not something I try to concern myself with too much, especially with these big-market teams that are always trading prospects for win-now talent.

But back to Knack. Hey, that rhymes. One of the stats I look at the most for pitchers, in general, is K-BB%. This tells us both how well a pitcher misses bats and how well they limit free passes. Knack currently has one of the highest K-BB rates in the minors at 30.9%. Not only is his 34.6% strikeout rate impressive, Knack has a stellar 3.7% walk rate, issuing seven free passes in 48.1 innings. The upside here isn’t substantial, but with a solid four-pitch mix, two of which grading as above-average (FB/SL) and above-average to plus command and control, Knack has the building blocks to develop into s reliable rotation arm.

I swear I’m not trying to promote the Marlins and Dodgers in this article, but this just shows how good they are at developing pitching talent. These are the organizations you want to look at and bank on them getting the most out of the talent. On the surface, Fulton’s 4.30 ERA and 1.36 WHIP this season won’t jump off the page at you, but his last two starts sure will. In each of his last two starts, Fulton has gone five innings of shutout ball, allowing one hit and zero walks. One of those two starts ended with eight strikeouts, the other an even 10.

Peep the ⚔️ from Jasson Dominguez on the filthy 79 mph CB. pic.twitter.com/XUFTzvtObN

Fulton is a big 6’7 southpaw that has three quality offerings and really seems to be settling in as a professional. His fastball sits in the low-90’s mostly but can get up to around 96 with run and sinking action to it. He’s already 225 pounds, so I won’t say there’s a ton of projection left on the frame, but I could see a touch of bulk added and additional velocity as well. That sinking fastball has helped Fulton register a 50.3% groundball rate thus far. Outside of the Heater, Fulton has a big plus curveball in the low-80s with plenty of horizontal break and the makings of an average to above-average changeup as well. If he can refine his command and ability to throw strikes as he develops as matures, Fulton has the chance to really develop into a special pitching prospect with easy top-100 upside.

Fantrax was one of the fastest-growing fantasy sites of 2020, and we’re not stopping now. With multi-team trades, designated commissioner/league managers, and drag/drop easy click methods, Fantrax is sure to excite the serious fantasy sports fan – sign up now for a free year at Fantrax.com. at Fantrax.com.