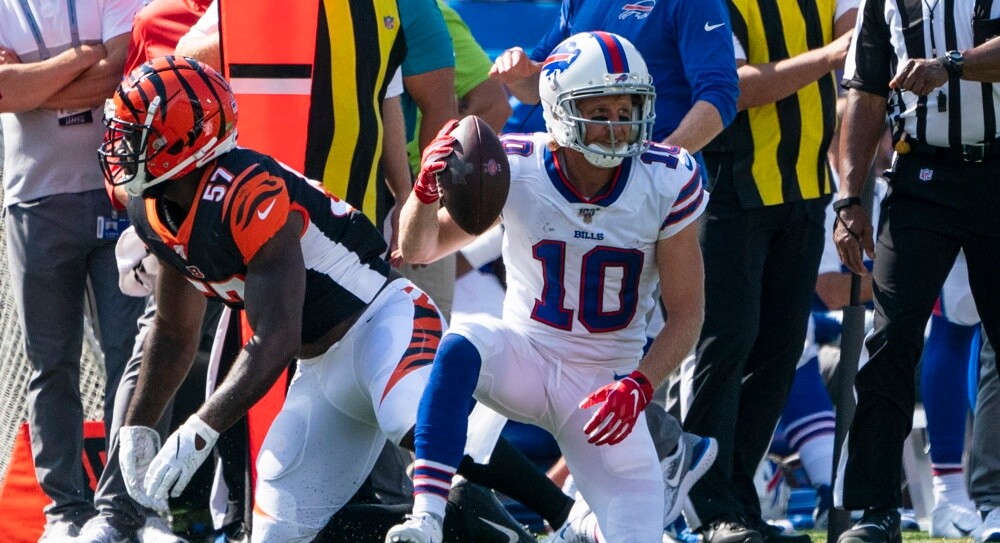 So who are some players who could be fantasy football league winners in 2021? I’ll share a couple of wide receivers currently being drafted outside of the top 35 who could end up producing as top-15 fantasy scorers at their position. These are players I’m generally willing to reach for above ADP to ensure that they end up on my rosters. You can also check out my league winners at quarterback, running back, and tight end.

With Tom Brady listed as one of my league winners at quarterback for the 2021 season, it only makes sense that his projected ceiling would then correlate to his wide receivers. Mike Evans and Chris Godwin both have fourth-round ADPs whereas Antonio Brown is an afterthought with an eighth-round ADP. This makes Brown an incredible value based on how the Tampa Bay wide receivers were used last season.

In 2020, Brown missed the first eight games due to suspension. From Week 9 through the Super Bowl, there were 11 games in which all three of Brown, Evans, and Godwin were active together. In that 11-game sample, Brown averaged an 18 percent target share with Evans and Godwin each garnering a 19 percent target share. The trio saw similar target shares, and yet, Brown’s ADP is somehow four rounds later than the other two.

The most likely explanation for the ADP gap is that Brown didn’t produce much with his targets down the stretch last year. Yes, he saw a similar target share, but in fantasy-relevant games from Weeks 9 through 16, Evans was the No. 7 fantasy wide receiver in PPR formats, Godwin was the No. 26 wide receiver, and Brown was just the No. 42 wide receiver. These totals may be discouraging, but remember that Brown had no reps with the team or Brady for the first half of the year, and on top of that, he was playing through a lingering knee injury that caused him to miss the NFC Championship game against Green Bay.

Even with little time with the team and the injury, Brown played well in 2020. His 2.07 yards per route run (YPRR) ranked 24th among wide receivers, and his 5.6 yards after the catch per reception (YAC/R) ranked 18th among wide receivers. While Brown may no longer be the perennial Pro Bowl player he was in years past, the 33-year-old veteran is just two years removed from a 1,300-yard season with a career-high of 15 touchdowns. It’s not far-fetched to think that he could once again reach 1,000 yards and double-digit touchdowns in 2021.

According to Bruce Arians, Brown is supposedly the “healthiest he’s been in a few years” after having surgery on his knee back in May. And there are no concerns about a lack of chemistry with Brady in their second season together. Brown has already been a standout at training camp and figures to be an integral part of the Buccaneers’ passing offense. As long as he can manage to ward off any off-field issues, there’s a scenario where Brown could finish as a top-15 wide receiver in fantasy this coming season. His ADP is creeping up, but I’d be willing to draft Brown as early as the fifth round considering his safe WR3 floor and potential for an elite fantasy ceiling.

It’s a mystery as to why Cole Beasley is being forgotten this preseason. Well, perhaps not, as his depressed ADP is likely the result of his vocal anti-vaccination stance leading to swirling rumors that he might retire or that the Bills might cut Beasley. The off-field media sensations have distracted from the fact that Beasley is a very good slot receiver and incredibly undervalued in fantasy drafts right now.

To start with, the rumor that Beasley could retire should no longer be a concern. He made a (likely empty) threat of retirement if the NFL were to mandate COVID vaccinations for its players. Whether he would’ve actually followed through on that is anyone’s guess, but it’s a moot point now. The NFL eventually pivoted to a stringent policy on forfeited games due to COVID outbreaks to encourage vaccinations, but without a mandate for universal vaccination, Beasley can continue practicing and playing without it.

There were additional rumors once the new NFL COVID forfeiture policy was announced that Buffalo could potentially cut Beasley to mitigate the risk of any forfeited games as a result of unvaccinated players spreading COVID during the season. However, the odds remain low that Beasley’s actions would result in a forfeited game. Although exact vaccination figures are unknown, nine NFL teams have more than 95 percent of their players vaccinated, and 27 teams are above the 85 percent threshold.

Mask rules are enforced for unvaccinated players like Beasley, so vaccinated Bills players are somewhat protected even if Beasley were to test positive. Unless a large percentage of Buffalo’s players remain unvaccinated, Beasley as a lone holdout doesn’t drastically increase the Bills’ overall risk of forfeiting any games. With Buffalo in a Super Bowl window after falling to Kansas City in the AFC Championship game last year, it seems extremely unlikely that they would cut their no. 2 starting wide receiver prior to the 2021 season.

While Beasley isn’t an elite talent by any means, his 20 percent target share last year was second-highest on the team behind only the 29 percent target share that Stefon Diggs saw. Beasley was efficient in his slot role with his 2.14 YPPR ranking 20th among wide receivers, and his 81.2 percent contested catch rate led the league. Even with the addition of Emmanuel Sanders in free agency, Beasley projects to remain in his primary slot role where he played 84 percent of his snaps in 2020.

Yes, unvaccinated players like Beasley who test positive for COVID would miss at least 10 days according to the most recent memo from the NFL, so he does carry a slightly higher risk of missing games if he were to test positive this season. However, that marginally higher risk of missing games shouldn’t drop Beasley more than a round at most in ADP considering his upside to once again finish as a top-24 fantasy wide receiver if healthy.

Prior to his leg fracture in Week 16 last season, Beasley was the no. 15 fantasy wide receiver in PPR scoring through 15 games, which is why his ADP in the 12th round or later as a WR5 this year is baffling. His ADP should be as high as the seventh or eighth round, but you can “reach” for him in Round 10 and still get a bargain. If Beasley’s ADP doesn’t rise over the next few weeks, I’ll end up having him on my roster in every single one of my leagues this year.