This time last year, Domingo Santana was somewhat of an afterthought. Ryan Braun’s name was swirling in trade rumors for the 800th time, Lewis Brinson was unanimously the Brewers’ top prospect, and Keon Broxton was being over-drafted in nearly every league. Santana still managed to sneak onto fantasy teams, but his 236 ESPN ADP meant he was often one of the last players picked to fill out a roster.

The return on that investment, however, was enormous. Santana hit .278/.371/.505 with 30 home runs and 15 stolen bases. He also managed to score 88 runs and drive in 85 more. Santana was a five-category contributor and finished as a top-20 outfielder in ESPN’s standard game. Santana finished the season ranked 54th overall, ahead of players like Cody Bellinger and Anthony Rendon, and right behind Kris Bryant and George Springer.

How is that possible, though? Bellinger ran away with the Rookie of the Year award, and the three others received MVP  votes. Santana didn’t receive a single MVP vote and wasn’t even an All-Star in 2017. Obviously, Santana’s production went somewhat unnoticed in the national eye, but should it have? Only four players ranked top-50 or higher in all five traditional hitting categories (HR, R, RBI, SB, AVG) in 2017. Those players were Paul Goldschmidt, Charlie Blackmon, Aaron Judge, and Jose Ramirez. Santana’s .278 batting average prevented him from being the fifth player on that list. With two more hits, Santana would have hit .282, pushing him into the top-50 in batting average. Maybe then he would have received some national credit. Well, probably not, but that’s okay. Santana’s under-the-radar season could provide some value when it comes to his 2018 draft price. 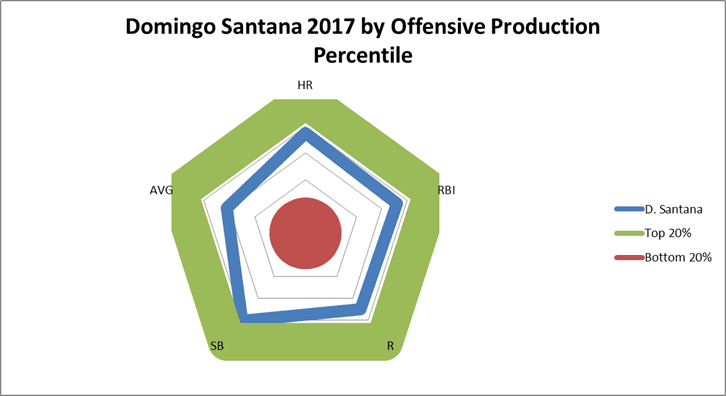 Santana is currently being drafted 70th overall in Fantrax ADP and 71st overall in NFBC leagues. This seems like an appropriate draft position, as long as Santana can keep up his recent production. For that, let’s take a deeper dive into Santana and his profile. Right out of the gate, a few things stand out. His 70% contact rate is pretty awful. Of the 144 qualified hitters last season, Santana had the 12th-worst Contact%, which led to his strikeout problems. Santana struck out 178 times in his 151 games played, giving him the ninth most strikeouts in baseball. By itself, the strikeout rate is pretty terrible, but when you take into account Santana’s above-average walk rate of 12%, the strikeouts become a little more tolerable.

Another thing to consider is that Santana has very solid power skills. His 39.7% hard-hit rate ranked 19th among qualified hitters last year, and his 89.3 MPH average exit velocity ranked 28th. The exit velocity is intriguingly high for a hitter who spends more time hitting the ball up the middle on the ground than pulling the ball in the air. Players are often able to “fake” power numbers by pulling the ball or hitting an extreme number of fly balls. Santana is not that kind of hitter; he is much more balanced than that. He takes an up-the-middle approach and maintains a pretty low launch angle of 12.5 degrees (126th of 144 qualified hitters).

Typically, too low of an average launch angle is considered a negative, but in Santana’s case, so much of his batting average comes from his near league-leading line drive rate of 27%. Only Daniel Murphy had a higher line-drive rate than Santana last season. Santana’s powerful batted-ball profile, combined with his strong speed on the basepaths, allows him to carry a very high batting average on balls in play. At first glance, his .363 BABIP could be considered a case for batting average regression, but he’s maintained a well above league average BABIP for years now. 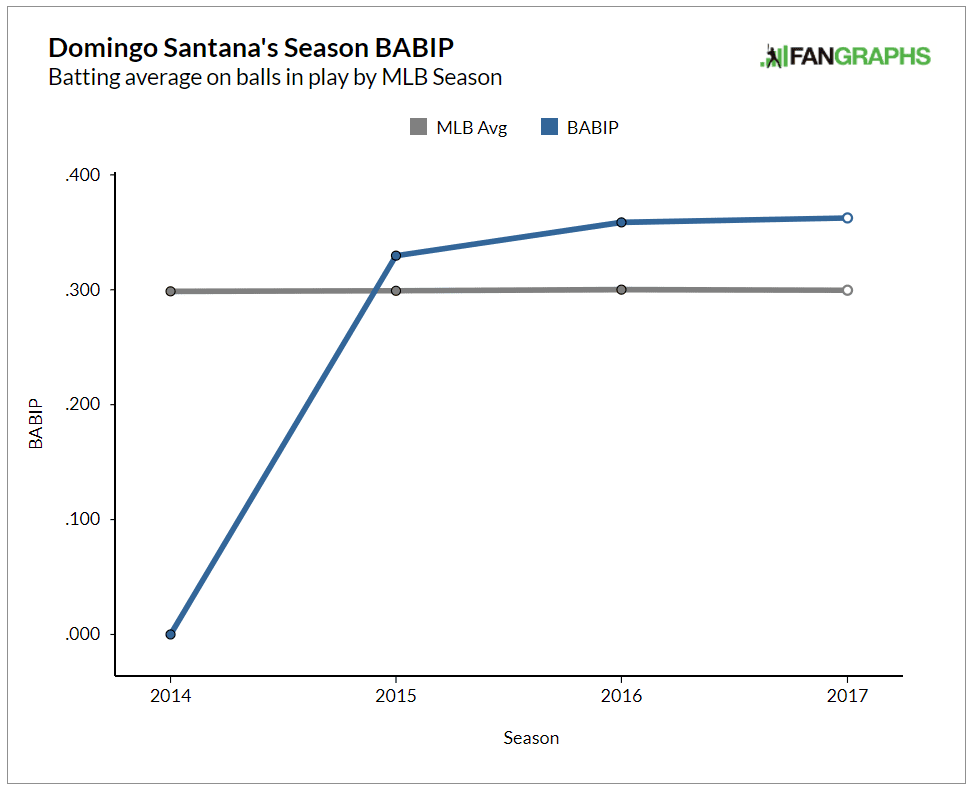 To me, Santana is simple. He is a fabulous but flawed hitter. His contact skills are steady but still dangerous, and if they slip any farther down the cliff, disaster likely awaits. That said, I expect Santana to return to top 20-30 outfield value with how constant his skills have been and how he contributes in all five fantasy categories. He may not be primed for another step forward in 2018, but another season like he had in 2017 is well worth his current asking price.

For more on Santana, check out The Baseball Show’s 2018 video profile below: