The Yankees’ power-hitting youngster steps into the box … stop me if you’ve heard this one before. Greg Bird has many of the same skills as his superstar teammates, without the success or track record. Newly acquired slugger Giancarlo Stanton produced an MVP season where he led all of baseball in home runs and somehow managed 255 combined runs/RBI on a team that lost more games than it won. Then there’s Aaron Judge, who broke into the majors and won one of the clearest Rookie of the Year races of the last 20 years. Finally, we have Gary Sanchez, who was the quickest of the trio to reach 20 career home runs, taking him just 54 games to get there. Also, don’t forget about Didi Gregorius, who has racked up 48 home runs of his own over the past two seasons, which is second-most among shortstops in the American League.

Bird has the potential to contribute to the Yankees’ powerful young core, but he has been plagued with injuries for the last several years. Due to shoulder surgery in 2016 and ankle surgery last year, Bird has just 304 at-bats since 2016 and a total of 299 days on the disabled list. When in the lineup, Bird has been a constant source of power and RBI. In his 46 games in 2015, he hit 11 home runs and drove in 31 runs. A 39-homer, 109-RBI pace as a 22-year-old? Not bad.

With a clean bill of health and looking ahead to the 2018 season, Bird has one of the softest landings possible. Playing half of his games in Yankee Stadium, where the right-field foul pole is just 314 feet down the line, and hitting in the middle of that lightning-infused New York lineup, there is a lot to like about Bird’s situation.

Bird’s swing, although imperfect in many ways, is set up well to capitalize on the short porch in right field. Bird is a dead pull hitter and pulled almost 50 percent of his batted balls in 2017. This tendency is very much an extreme when compared to others in the league. Of the 390 hitters with 140 or more plate appearances last season, Bird’s 48.6% pull percentage ranked 366th. When you combine his drastic pull tendency with his approach toward lifting the ball in the air, there is no question why he has been able to hit for power early in his career. Among that same group of 390 hitters from last year, Bird has the fifth lowest groundball-to-fly-ball rate (.58 GB/FB). This combination of getting the ball up and out in front looks a lot like Thursday night softball. 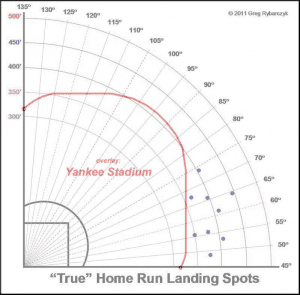 Bird’s problem is making contact. His 71.7% contact rate last year was awful, and when combined with his extreme launch angle and pull percentage, will prove disastrous for his batting average. In my opinion, his poor contact rate has little to do with his athleticism and much more to do with his extreme tendencies at the plate. Bird has an average launch angle of 24.6 degrees. This type of swing lends to less time for the bat in the hitting zone and shrinks the impact zone for bat to ball. Think of it this way: Again, using slow pitch softball as an example. When the ball comes in from the pitcher, the arc on the pitch goes from roughly four feet up to 8-10 feet then back down to 4-6 feet. When you swing with an uppercut in slow-pitch softball, you are oftentimes meeting the ball as it comes in from the pitcher. In fast pitch, the pitch path is coming in from the mound at a slight downhill angle. When hitters take aggressive uppercut swings, their bat path just doesn’t match up with pitch path, shrinking their contact point and leading to more swings and misses. 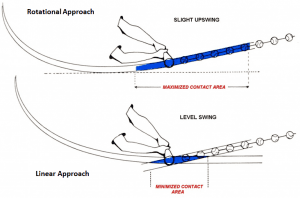 In Bird’s case, he also is out in front, which compounds the issue. Using the chart below, we can see the impact of average launch angle and then average contact rates using 385 hitters with 140 or more at-bats in 2017. Bird fits into the 20-plus degree category, which, when averaged for the 78 hitters in Bird’s group, results in a contact rate of 76.6%. When you add in that Bird also gets the bat head out in front on most batted balls, the contact rate gets worse. Of the 78 hitters in Bird’s group, 27 of them, including Bird, also pull the ball over 45% of the time. This results in an average contact rate of just 73.7%. Woof.

Maybe the batting average won’t be there for Bird next season, but there are still plenty of other positives. His power approach, home park and solid average exit velocity (89.7 MPH) could easily help him hit 30 or more home runs if he stays healthy. Also, if he gets on base enough to stick in the middle of that dangerous lineup, he has a clear path to 90+ RBI and 80+ runs scored. Bird can be a helpful asset in many leagues and be a late source power. A top-12 finish at first base seems like a stretch, but I expect his value to rise and fall with his power production throughout the 2018 season.

For more on Bird, check out The Baseball Show’s video profile below.