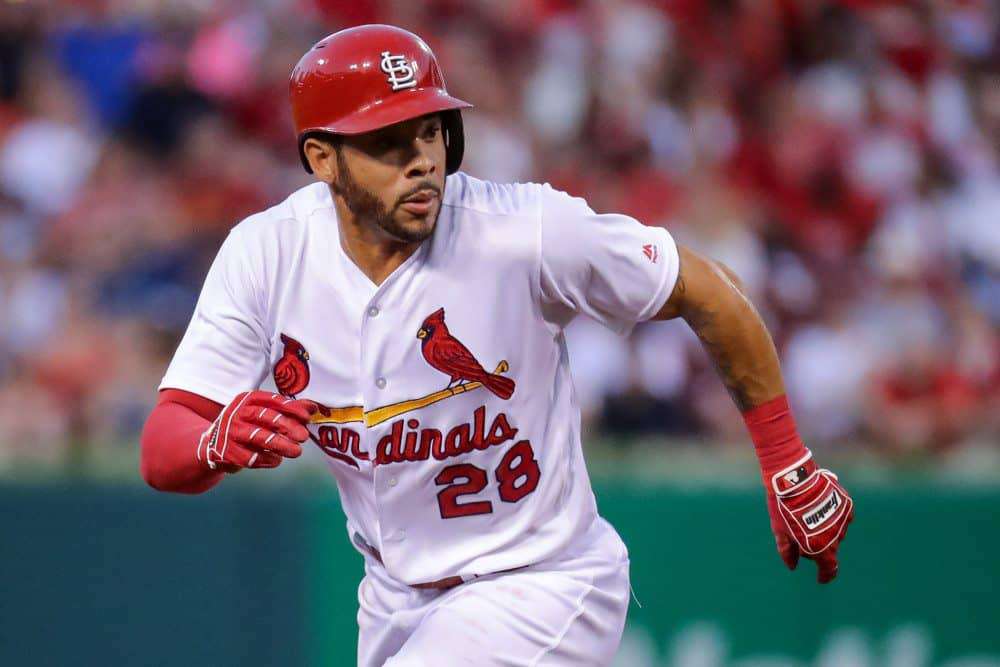 Tommy Pham, the speedy St. Louis outfielder, was one of the few Cardinals players to outperform expectations in 2017. He logged the majority of his time in left field last season, but after his All-Star caliber performance — and Dexter Fowler’s declining range in center field — Pham is slated to spend the majority of his time in center in 2018. In addition to covering a lot of ground in the outfield, Pham also covers a lot ground on the base paths. Despite his shortened season of only 128 games played, he still ranked top 10 in stolen bases. If you combine his 25 steals with his 23 home runs, the exclusivity of that club narrows down to only nine players, with Mike Trout being the only one of the nine to have fewer at-bats than Pham and still reach 20/20 status.

Success hasn’t always been there for Pham, though. The 29-year-old has over 800 games played in the minor leagues and will be 30 years old before stepping into the batter’s box at Busch Stadium to attempt a repeat of his extraordinary breakout season. Pham’s path to the majors was slowed in large part due to his degenerate eye disease. He was diagnosed with Keratoconus in 2008 and has been managing it ever since. Pham’s resilience began to pay off early in 2017 when he put together strong numbers with Triple-A Memphis. Pham slashed .283/.371/.500 in his 25 games with the Redbirds before getting the call from the Cardinals in early May.

Pham made quick work of his opportunity with the big league club, posting a .978 OPS in 20 May games. Pham also had an OPS over .900 in four of his five months as a big leaguer. When it was all said and done, his 2017 season can be summed up by the number 11. That is where Pham placed in this year’s NL MVP voting. Understandably, he didn’t receive any first-place votes, but he did manage to finish ahead of superstars like Bryce Harper, Anthony Rizzo, and Clayton Kershaw.

The looming question for many as we approach 2018 is: Can Pham repeat? To answer that question, let’s dive a little deeper into Pham’s 2018 stats. The highlight of his season was a .411 on-base percentage, which was bettered by only Joey Votto, Trout, Aaron Judge, and Justin Turner. That OBP is supported by a solid approach and Pham’s ability to hit the ball to all fields. Pham’s 80% contact rate is less than stellar, but he makes up for it by being very selective at the plate. In fact, Pham swung at less than 20% of pitches outside of the zone last season, a feat that was bettered only by his Cardinals teammate Matt Carpenter and Joey “freaking” Votto. In addition to his selectiveness of pitches, Pham also achieved a very balanced all-fields approach on balls in play. He almost profiles as an opposite-field hitter, letting the ball travel deep into the zone before making contact. The patience he has shown, combined with his willingness to go the other way, gives him a relatively high floor, especially in the batting average department. 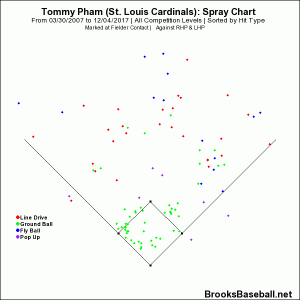 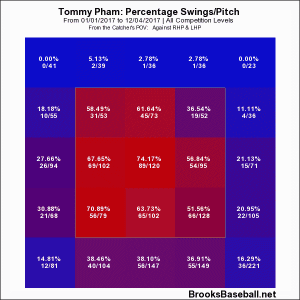 The power portion of Pham’s game, however, raises a few questions. His 23 home runs last season were far from cheap. In fact, much the opposite. Pham’s 407 foot average home run distance places him in the top-30 league-wide, and his borderline elite Average Exit Velocity (89.2) sustains his 20+ home run power. My concern lies with the extreme number of ground balls Pham hits. He is top-10 in GB/FB rate and one of only 17 qualified hitters to hit the ball on the ground more than 50% of the time. Now, I may not be a hitting expert, but if there is one thing of which I’m fairly certain, it’s that ground balls don’t leave the ballpark. Another factor seemingly working against Pham would be his unsustainable 26.7% HR/FB rate. Extreme power hitters like Aaron Judge and Giancarlo Stanton tend to have very high HR/FB rates, but this is because they generate so much power and velocity that a larger percentage of their fly balls result in home runs.

Pham was undrafted in most fantasy leagues last season, and he shocked many by being one of the few waiver adds to post an OPS above .900. If you are going to end up with Pham this year, it will not be off of waivers. According to Fantrax’s early ADP data, Pham is going around 75th overall. Pham comes with his fair share of questions and maybe even a few concerns, but if he didn’t, he would easily be a potential fourth- or fifth-round pick based on his skills. Given a full season of at-bats in 2018, I would expect 18-20 home runs, 20+ stolen bases, and around a .285 batting average to go along with his extremely high OBP. The risk is real when it comes to health concerns, especially when you take Pham’s eye condition into account. But don’t blink on draft day or you could miss out on another remarkable 20/20 season from Pham.