How would you best describe Andrelton Simmons’ defense using just one word? For me, the first word that I think of is “freak.” No, not “Big Time Timmy Jim” Tim Lincecum, “The Freak.” I think of an athletic freak. What Simmons has done at the shortstop position since coming up has been unmatched by any other defender in the big leagues. His 163 defensive runs saved since 2012 is best in all of baseball and more than double Brandon Crawford (70) as the second most at his position. Simmons, known much more for his glove than anything he has done with his bat, goes relatively overlooked in most fantasy leagues, and for good reason. Simmons hadn’t finished as a top-15 fantasy shortstop until last year.

Simmons is coming off a career year offensively. He hit .278 with 14 home runs and 19 stolen bases. He scored 77 times for an Angels team that ranked bottom-10 in baseball with 710 runs scored, and he drove in 69 runs. In the four years prior, Simmons had averaged (per 162 games) just 10 home runs, seven steals, and a .262 batting average. Current Fantrax ADP has Simmons being taken just outside the top 200 as the 14th shortstop off the board, right behind Orlando Arcia and Zack Cozart and right before Tim Beckham and Amed Rosario. Not exactly a group that screams “safe bet.” Of that group, however, I’d give the considerable edge to the shortstop with the defensive skills to keep him in the lineup 150-160 games per year. Simmons’ profile as a hitter is a fairly safe one. Better yet, he has shown substantial growth over the past three seasons.

Simmons is actually a patient hitter despite taking only 47 walks last season, and he rarely gets fooled at the plate. In fact, according to Statcast, he swung and missed only 143 times in 2017 despite playing 158 games. To put this in better context, Tim Beckham, who is being drafted only a few spots after Simmons, whiffed on 362 pitches last season while playing in 21 fewer games. If we have learned anything in the past several years, it’s that strikeouts and swing-and-miss tendencies are not the end all, be all. With that said, hits are achieved by putting the bat on the ball, so I’d prefer someone who can do that consistently. Simmons’ 10.4% strikeout rate (third-best in MLB) is anchored by his 88% contact rate (sixth-best in MLB). As solid as his bat-to-ball skills are, his quality of contact needs improvement. Simmons’ average exit velocity and hard-hit rates rank in the bottom-third among qualified hitters. So if Simmons lacks power, where did his double-digit increase in home runs come from last year? Pay close attention; this is the best part.

Simmons has made clear adjustments to his approach over the last three seasons. His fly ball percentage increased from 22% in 2015 to 26% in 2016 and then up to 31% in 2017. In addition to his increased loft on his swing, he’s made a concerted effort to pull the ball more. As you can see in the batted ball chart below, Simmons’ pull percentage has been altered from a very balanced 34% in 2015 to a much more aggressive 45% last season. These changes both in fly ball percentage and pull percentage have resulted in some very favorable outcomes. Simmons’ hard-hit rate increased by more than 26% from 2015 to 2017, and his slugging percentage followed a similar trend, going from .338 to .421 in the same time frame. The incredible feat, which is something that gives me hope for Simmons’ future, is that his contact skills stayed strong with his new swing. With more than enough contact% to sacrifice for some additional power, the adjustment seems like a calculated one. We saw a similar adjustment from Elvis Andrus in 2017. 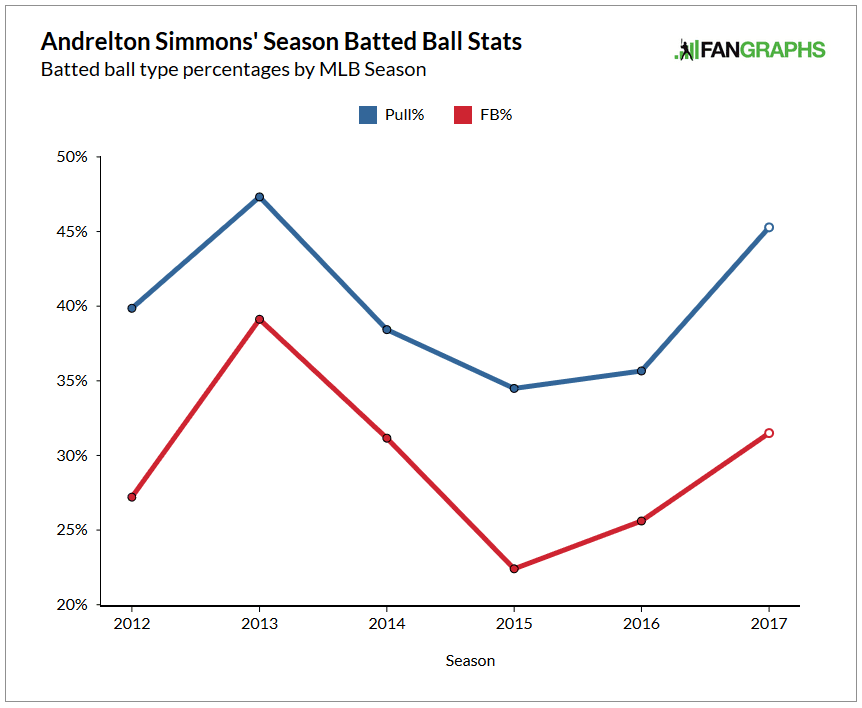 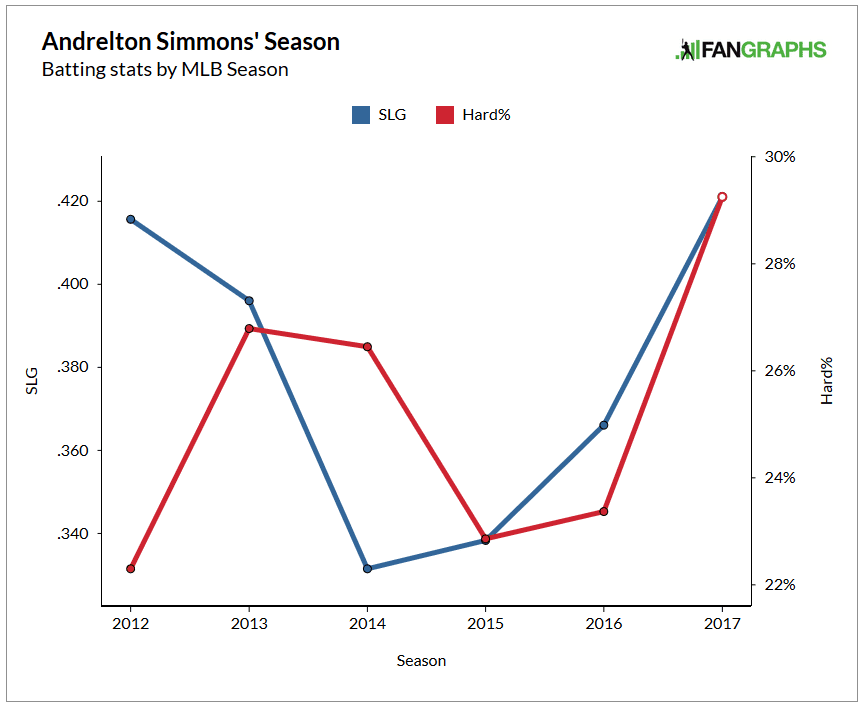 In addition to the power boost Simmons has received, his wOBA has been steadily rising for the last four seasons. Simmons’ wOBA, or weighted on base average, is above the league standard for the first time in his career. If he continues to develop offensively, he could earn a more lucrative lineup spot in the Angels’ much-improved offense. Another positive trend for Simmons is his willingness to swipe the occasional bag or two. His 19 steals last year won’t win the category for you, but they were well above his career norm. And like his power, his stolen bases are treading in the right direction.

Shaking the glove-only tag for Simmons will be tough based on his marginal hitting performance prior to 2017. That may also provide a discounted price in most leagues. The truth is, Simmons is improving in almost every offensive metric, and the production is real. A .270-280 batting average along with around 18 homers and 18 steals seems reasonable, with a notable boost in runs and RBI production. This may still not earn him a top-10 shortstop ranking, but I’m not willing to bet against him. Remember, this guy’s a freak.