Josh Bell – The Sky is the Limit

Josh Bell is the Pirates’ 25-year-old, switch-hitting first-baseman who led the team with 90 RBI in his rookie season. He played in 159 games in 2017 after breaking into the big leagues the year before and posting an impressive .368 on-base percentage in his first 45 games. Bell, known more for his approach than his power, managed to walk (21) more than he struck out (19) in 2016. His plate skills are well documented throughout his time in the minor leagues and were a big reason why he ranked as one of MLB.com’s top-100 prospects five out of six years while making his ascension to Pittsburgh. In 149 games at Triple-A, Bell hit a notable .306/.396/.476.

While with the Pirates the last few years, Bell has produced well, especially considering he was one of the youngest players in baseball to get full-season reps. Bell hit in the heart of the Pirates’ order (2-5) more than 75% of the time in 2017 and will likely stay there this season. He has played in 159 games two years in a row, having split time between the minors and the majors in 2016, and it might have taken a toll on him last season. Bell had what might have been the best month of his career in August, slashing .323/.405/.548 with 21 RBI and walking five more times than he struck out. However, it was followed up by one of the worst months of his career in September, when Bell had an OPS of just .639 with more strikeouts than games played. One theory is that he wore down, as there has been a small correlation to late-season drop off with him in the past. It also could be just another case of small sample size nothingness.

When looking at the bigger picture of Bell’s profile, he offers a nice balance between his swing, skills, and approach. We can tell Bell doesn’t chase much outside of the zone by looking at his solid 27% O-Swing%, which ranks top-50 among qualified hitters. He also takes a patient approach overall, which shows up in his 43.5% swing%. On the batted ball side of things, Bell offers a surprising bit of power considering how may groundballs he hits (1.64 GB/FB). His .211 ISO from last year just ranked 27th-best in the National League, and while his 87.7 MPH average exit velocity isn’t quite elite, it’s enough to get the ball out of the ballpark with regularity.

This skillset and approach translate well to major league production and put Bell in a class of hitters who contribute greatly to fantasy. Using a minimum of 500 plate appearances, Bell was one of just 15 hitters last year to have a strikeout rate below 20%, a walk rate above 10% and still have a slugging percentage over .460. Of those 15 players, only Josh Bell, Mike Trout, George Springer, Yasiel Puig, and Kris Bryant are under the age of 29. Bell is the youngest of the group at 25 years old. No, this doesn’t mean that Bell is Mike Trout, so put your pitchforks down. It does, however, mean that Bell has some striking skill and swing similarities to one of the names mentioned above. For anonymity purposes, we will call this player Bris Kryant. Ok, fine. It’s Kris Bryant. But try to keep an open mind when I tell you that Bryant’s and Bell’s hitting profiles share a lot of similar qualities.

As you can see here, both Bryant and Bell are patient hitters with above league average walk rates (9%) who strike out below the league average (22%). They also tend to pull the ball around 45 percent of the time and generate about the same hard-contact rates (33%) and average exit velocities (87 MPH). The glaring difference between the two hitters, aside from offensive production, is launch angle. Bryant hit 45 more fly balls than Bell in the same number of at-bats in 2017. Those fly balls contributed to a higher slugging percentage and more runs and RBI. Even without a launch angle adjustment, Bell should still see incremental growth in his power production in 2018 based on what we’ve seen from him over the last few seasons.

The graph below illustrates Bell’s power growth over the last several seasons in both the minors and the majors. By using the baseline of his minor league ISO average, we can see that, around mid-season 2015 in Double-A, he began to hit for more power. As far as I can tell, this is pure power growth and not a side effect of increased fly ball or pull tendencies. Bell hit for a career high .210 ISO last year, despite his late-season drop-off, which appears to be a trend in three of the last four seasons. 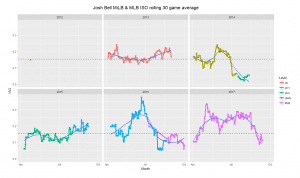 I’m excited about what the future has in store for Pittsburgh’s new slugger, even more so if he can take that incredible approach and sprinkle in a few more fly balls. As far as 2018 expectations go, Bell is about as safe as it comes for a 25-year-old. He should supply solid counting stats and a batting average that will offer more benefit than harm. His floor is safe, and his ceiling is, well … his ceiling is Kris Bryant.