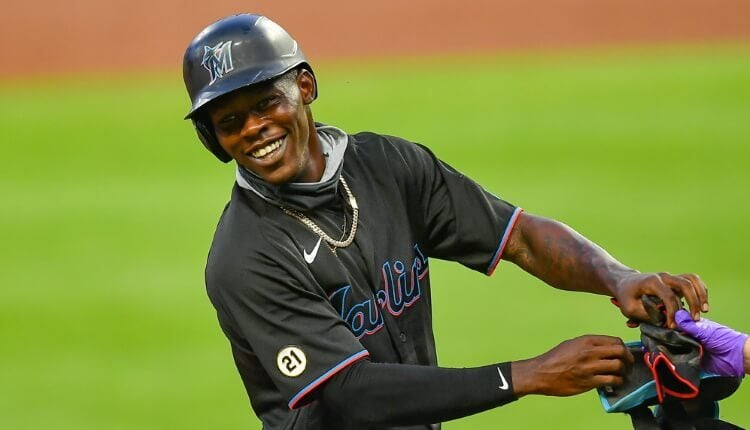 As many of you know, I developed a tool that calculates a player’s xwRC+. I have written several articles for Fantrax about this and am currently working to upload data that will automatically update and be publicly available. Before the start of the 2022 season, xwRC+ identified several breakout candidates for fantasy managers to draft. That list included Ian Happ, Andrew Vaughn, and Max Kepler who have all performed very well so far. This input variables for xwRC+ take a little while to stabilize so the data is still not 100% reliable. However, we can use the model to make educated predictions in determining good trade candidates. In the article below I use xwRC+ to identify candidates that fit into each of the following categories:

I detail the criteria for each of the categories below. Hopefully this can help you improve your team!

For this category, I want to focus on players that are experiencing “breakouts” in 2022. I am ignoring established fantasy stars like Paul Goldschmidt and Manny Machado (both of whom xwRC+ is low on). The criteria for a sell-high candidate are players who have a wRC+ of at least 130 while having an xwRC+ less than 100. I will write a short blurb on each with some notable stats to be aware of.

Crawford currently has a wRC+ of 146 while posting an xwRC+ of just 99. Based on his wRC+, Crawford has been the best shortstop in baseball and many people might be finally buying into his early-season success. Now is the perfect time to sell. Crawford currently has a .337 BABIP which is well above his career .308 BABIP. Even if the BABIP continues to run high, Crawford has just a four percent barrel rate which ranks 194/227 hitters with 150 plate appearances. In addition, Crawford hits the ball extremely soft. He has just an 83.6 average exit velocity and his 65th percentile EV ranks 218/227.

Jeff McNeil has a wRC+ of 136 right now but an xwRC+ of 88. Most of McNeil’s wRC+ is being carried by a .320 batting average. McNeil has run high BABIPs consistently throughout his career, however his current .354 BABIP is not sustainable. If this BABIP drops down toward his career .328 number, he will see his wRC+ come crashing down.

In 2022, McNeil has also seen the lowest pull percentage and barrel rates of his career. This has resulted in a HR/FB rate of just 4.8%. If McNeil is going to hit for even less power than usual, he becomes even more reliant on his high BABIP. I think now is a good time to sell high on McNeil and capitalize on his strong start.

Last season, Hays flashed breakout potential with an increased barrel rate and a decreased chase rate. Those two metrics in specific have gone back to his previous career norms. Hays has posted a barrel rate under six percent while chasing over 35 percent of the time. This is a big reason why his xwRC+ is only 89 compared to his 135 wRC+. Similar to the other two sell-high candidates, Hays is running a .333 BABIP which seems a little bit high for his profile. xwRC+ is skeptical that Hays’ early season success is deserved and is recommending you sell high on Hays.

In contradiction to the previous category, for sell low I want to key in on some bigger names. These are players that fantasy managers drafted with higher expectations and have been disappointed with the results. The criteria for selling low is a current wRC+ below 90 and an xwRC+ below 80.

If you have been keeping up with my AL Lineup Analysis articles on Fantrax, you are aware of my thoughts on Báez. xwRC+ agrees with me as Báez has an xwRC+ of just 52. The only player with a lower xwRC+ than Báez is Aaron Hicks. 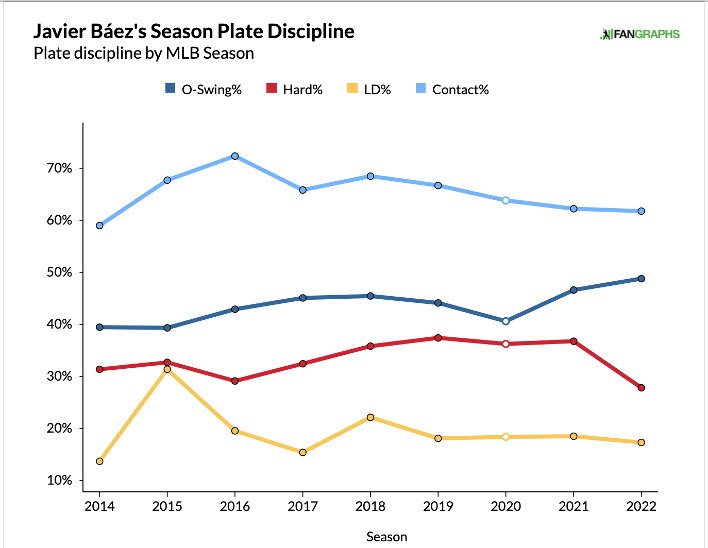 As you can see in the chart above, Báez has been swinging more at pitches out of the zone, making less contact, hitting fewer line drives, and making hard contact at a significantly lower rate. In addition to all of this, Báez has attempted just one stolen base this entire season. Báez is a borderline drop candidate for me and I would be selling low for anything you can get at this point.

When Grichuk was traded to Colorado many including myself thought this was going to unlock a new level of production from Grichuk. Instead, it has had the opposite effect. So far in the season, Grichuk has looked like a completely different player. 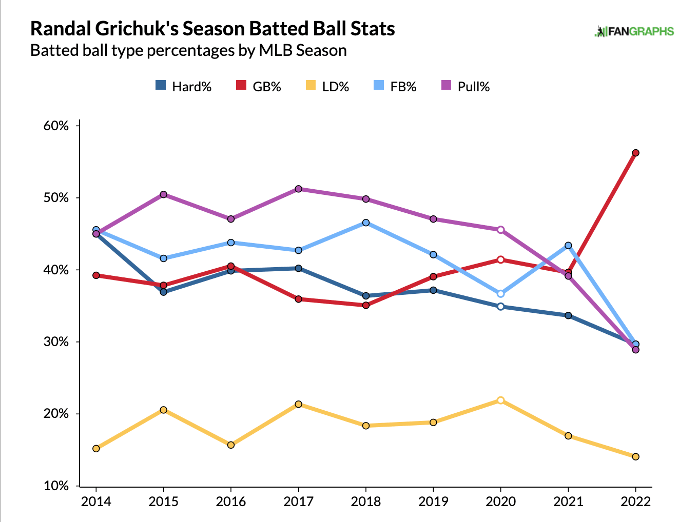 Grichuk has seen his ground ball rate sky-rocket while all other metrics including his hard hit rate and pull percentage have fallen off. Grichuk is not making any solid contact and that is a big reason why is xwRC+ is only 70. He has lost all of the skills that made him an enticing fantasy option and I would be selling low as I do not see the old Grichuk returning anytime soon.

There have been numerous 2022 breakouts. This group of players is like the sell-high candidates. Mike Trout has posted a high xwRC+ this year, but that does not come as a surprise. The criteria for this were a player with a wRC+ of at least 130 and an xwRC+ of at least 130. The list was too long to write about for all the hitters so I could only go with three. Some of the other names that meet these criteria are Trey Mancini (who I wrote about before), Garrett Cooper (I wrote about targeting this off season), Taylor Ward, Mike Yastrzemski, and Joc Pederson.

I felt like it was important to write about Jazz. I was critical of Chisholm in the off-season and he showed up in one of my xwRC+ bust articles. As fantasy analysts, it is important to own up to players you were wrong about and Jazz is one of them. He is off to a great start at the plate which is backed up by a 135 xwRC+.

xwRC+ cannot account for adjustments made by players. Looking at last season’s stats, the model was very down on Jazz and thought that a bust was for sure coming. Chisholm responded by increasing his barrel rate to an astounding 17% and increasing his sweet spot percentage from 29% to 37.6%. Chisholm has also increased his 65th percentile exit velocity and reduced his chase rate. These adjustments have completely changed both my own and xwRC+’s outlook on Jazz and you should buy high if anybody is willing to trade him.

I was recently on the Keep or Kut Podcast and spent some time discussing xwRC+. One of the questions asked was if the model predicted the breakout of Alejandro Kirk. Looking back at my data, Kirk did not reach the minimum plate appearance requirement I implemented into my data selection. I went back and input his numbers from last season, and his xwRC+ came out to 129. The model was all in on Kirk even before this season. So far Kirk has been excellent in 2022 posting a 149 wRC+ with a 131 xwRC+. Kirk is getting the playing time he deserves and if anybody who owns Kirk has not fully bought in now is the time to buy high. He can be an elite catcher this season and moving forward.

This is one breakout that I did not see coming. Drury has been excellent so far in 2022 posting a 131 wRC+ which is fully supported by his 133 xwRC+. According to Drury, he had made a swing change trying to increase his launch angle and sell out for power. Going into 2022, he adjusted back to the basics and has an overwhelming amount of success so far. Drury has increased his barrel and sweet spot percentages to be above league average. He also reduced his chase rate while increasing his contact percentages. Perhaps what is most encouraging is that his BABIP and HR/FB numbers have decreased from last season. Drury is not getting lucky or potentially seeing the benefits of playing his home games in Cincinnati. Drury’s breakout is real, and I would be buying high on him.

For this set of players, I am again looking at a list of players that have been underperforming. Like the sell-low group, these players were drafted with the expectation that they would be productive fantasy players. So far this group of players has a wRC+ below 100, but an xwRC+ of at least 120.

In early May, I included Gallo as a potential trade target in fantasy leagues. Over a month later, I am still willing to make the case for Gallo. At least now, Gallo is showing signs of life. Since May 31, Gallo is batting .265/.359/.588 with three home runs. Many of Gallo’s metrics look very similar to his numbers in years past. He has a barrel rate over 19 percent and has increased his sweet spot percentage to over 35%. He is chasing on more pitches and whiffing slightly more, but this is balanced out in xwRC+ by his great quality of contact numbers. Gallo currently has an xwRC+ of 121. A power hitter like Gallo does not just forget how to hit home runs, especially with the short porch in Yankee Stadium. I continue to urge fantasy managers to buy low on Gallo before it is too late.

After posting two solid seasons to start his Boston tenure, Alex Verdugo has suddenly struggled in 2022. So far, Verdugo has posted just a 75 wRC+, but according to xwRC+ he has been one of the unluckiest hitters in baseball. His xwRC+ currently sits at 122 making him an excellent buy low target. Comparing Verdugo’s numbers to last season the results are almost identical.

The most notable change has been a sudden drop in BABIP. Verdugo has a career .314 BABIP including a .338 BABIP since joining Boston. This season, his BABIP sits at just .262. In addition, Verdugo has posted just a 4.4HR/FB%. Verdugo is not pulling the ball significantly less to influence such a dramatic drop-off. He should start seeing his luck improve soon and is a great buy-low candidate.

I am cheating a little bit with this one. Mountcastle has a 104 wRC+ on the season, but I felt like he needed to be included in this buy low section. Ryan Mountcastle has a xwRC+ of 133. He has been much better than the surface stats would lead you to believe. Mountcastle has a barrel rate over 14% with one of the best sweet spot percentages in the league. He makes consistently hard contact and had managed to reduce his whiff percentage from 31.6% last year to 28.1% this year.

When you see Mountcastle’s .301 BABIP, your first thought might not be that it should improve. However, so far this season he has posted a line drive rate of 28.2%. There are currently eight players in baseball that have posted a line drive rate of at least 27%. The average BABIP amongst those players is .346. The argument can be made that Mountcastle has gotten unlucky. At only 25 years old, Mountcastle could be on the verge of a breakout and xwRC+ thinks now is a perfect buy-low opportunity.

A Guide to Using FAB In Your Fantrax League