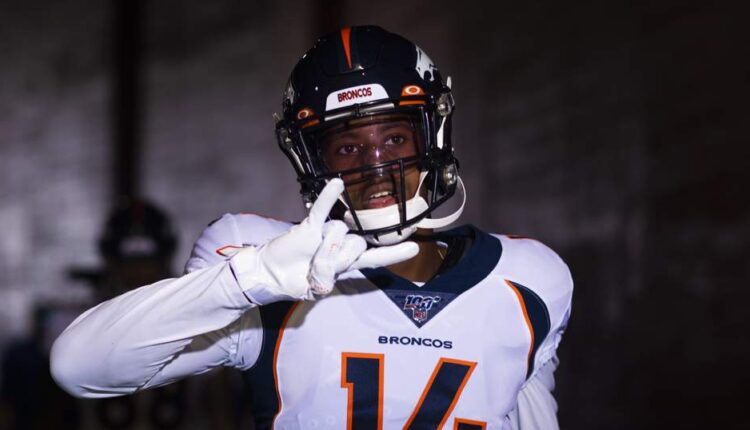 As of this writing, the bounce-back wide receivers listed below are ranked outside of the top-20 at their position and outside of the top four rounds based on FantasyPros’ expert consensus rankings (ECR). Based on either lack of production and/or injury last season, it’s understandable why fantasy GMs are letting them fall in drafts, but don’t sleep on their potential for strong campaigns this coming year. Here are the three biggest fantasy wide receivers who are poised to bounce back in 2022.

Many have long forgotten that Courtland Sutton was an ascending talent being touted as a top-10 wide receiver prior to tearing his ACL early on during the 2020 season. Prior to his injury, Sutton ranked 12th in yards per route run (YPRR) in 2019 and finished as the WR18 in PPR scoring that year. Last season, Sutton wasn’t 100 percent back from the injury and was paired with a quarterback that didn’t match his skill set. Despite ranking 11th in intended air yards per attempt (IAY) in 2021, Teddy Bridgewater was horribly inefficient, as his 25.5 percent deep ball completion rate ranked 32nd among quarterbacks. Even with 29 deep targets, which ranked sixth among wide receivers, Sutton logged 892 unrealized air yards due to off-target passes from Bridgewater, which was fifth-most among wide receivers.

The Broncos’ trade for Russell Wilson this offseason should revitalize Sutton’s ailing fantasy production. Wilson’s 36.4 deep ball completion rate last season was notably higher than Bridgewater’s and should signal a marked improvement for Sutton’s production this coming year. In fact, Cecil Lammey recently reported that “Sutton looks like the favorite target for Wilson as the offseason workouts continue”. If the two continue to build rapport during the preseason, there’s no reason that Sutton can’t find similar success in a role akin to that of D.K. Metcalf, who finished as the WR13 in PPR last season with Wilson. On top of that, Denver’s offense will likely pass far more with Nathaniel Hackett than they did in 2021 with Vic Fangio, when they relied on the defense to win games and ranked 10th lowest in the league in pass rate to hide Bridgewater’s deficiencies. Still just 26 years old, Sutton is currently ranked as the WR14 in my top-200 PPR redraft rankings (which you can find here) and remains a value even with his ECR having crept up to WR21 in recent weeks.

It was widely known that Allen Robinson was unhappy in Chicago dating back to 2020 and even more so after the Bears used the franchise tag on him, and it was apparent during the 2021 season that his level of effort put forth was low in yet another losing season. Prior to his fallout with the Bears’ organization, Robinson averaged 100 receptions and nearly 1,200 receiving yards in the two seasons prior in spite of sub-par quarterback play from Mitch Trubisky and Nick Foles. Operating under the assumption that Robinson hasn’t declined physically and that his lack of production last year was as a result of low motivation, his fantasy ceiling remains incredibly high after having joined the reigning Super Bowl champions in Los Angeles this offseason.

Robinson is stepping into the no. 2 wide receiver role on a Rams offense that ranked seventh in pass efficiency last year with Matthew Stafford at the helm. In the first nine games of 2021 prior to tearing his ACL, Robert Woods was WR12 in PPR formats over that span in that no. 2 role even with Cooper Kupp‘s dominant run as the top overall wide receiver and fantasy player. Woods averaged 5.0 receptions and 62 receiving yards on 7.7 targets per game over that period and saw a 24 percent target share even with Kupp commanding a team-leading 32 percent target share. Robinson’s current ECR of WR28 is woefully low, as he should at worst finish as a strong WR2 barring injury. I have Robinson ranked as my WR14 for 2022 and worth an early third-round pick, nearly three rounds ahead of his ECR ranking.

While Justin Jefferson is clearly the No. 1 wide receiver in Minnesota at this point, his standing doesn’t mean that Adam Thielen should be overlooked in fantasy drafts. Prior to injuring his ankle in Week 13 last year, Thielen was the no. 9 wide receiver in PPR points per game (PPG) through 12 weeks even with Jefferson ranking as the no. 6 wide receiver in PPR PPG over that span. As with Kupp and Robinson mentioned above, there’s also an opportunity for both Vikings wide receivers to be strong fantasy options despite the vast gap in ADP between them.

Yes, Thielen carries a risk of declining production in his age-32 season, but his rapport with Kirk Cousins should guarantee a high target share, particularly in the red zone, as Thielen has scored double digit touchdowns in each of his last two seasons. Thielen’s injury risk is also overstated, as he’s missed just 11 games over the last six seasons since he became a full-time starter in 2016, making his current ranking far closer to his floor outcome barring injury than his ceiling. At his current ECR of WR34 in the seventh round or later, Thielen is a value WR3 or flex option whose potential reward far outweighs the risk.