Wil Myers – Can He Sustain the Power & Speed Combination? 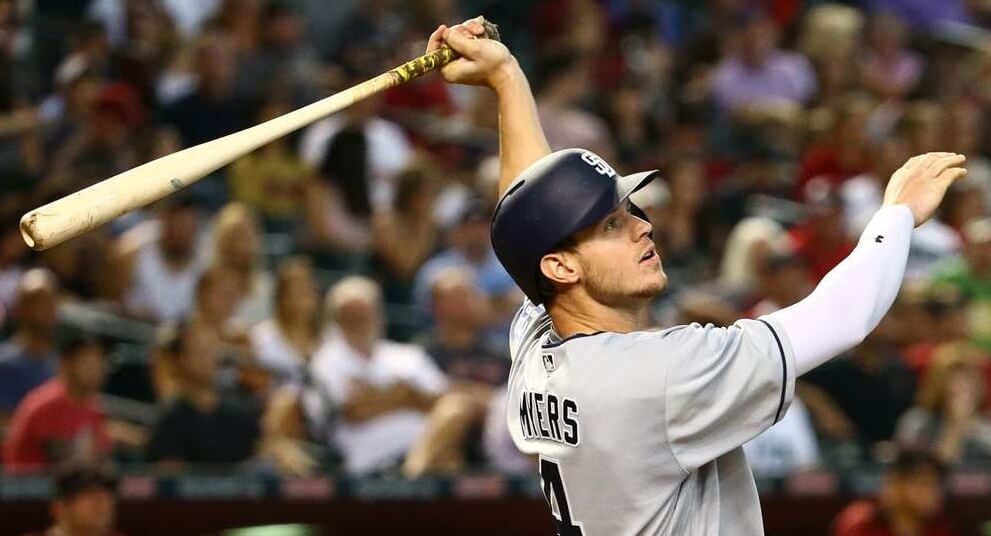 In traditional 5×5 rotisserie leagues, players like Wil Myers tend to excite fantasy managers with the power and speed combination. In 2020, Myers was on pace for career bests in home runs and RBI. After finishing strong in the second half of 2019, Myers headed towards a solid fantasy campaign many hoped for since 2017. As always, we dive into what happened in 2020, his batted ball profile, and plate discipline. We also look at his Stacast data, results against different types of pitches, and reasons for optimism and concern.

Wil Myers – Can He Sustain the Power & Speed Combination?

You gotta feel happy for Wil Myers. People were writing this guy off the last two seasons.

Now he’s out here having (what would have been) an All Star campaign. 👏🏼 pic.twitter.com/AdZ8GvDp6Z

If we take an average of plate appearances across his three full seasons over the past four years, it averages out to 605 plate appearances. When we pace out his 2020 season, Myers would’ve finished with 41 home runs, 94 runs, 110 RBI, and five steals. In terms of those counting stats, Myers would’ve reached career highs in home runs and RBI. It seems like an unlikely scenario and more so the best-case scenario.

In the shortened 2020 season, Myers notched career highs in terms of his slugging percentage and almost surpassed career bests in batting average and OBP. Granted, over a full season worth of plate appearances, his batting average and OBP may fall closer to his career averages. Throughout his eight-year career, Myers has a slash line of .254/.329/.447. Even his career 9.8% walk rate and a 26.6% strikeout rate falls in line with his 2020 walk and strikeout rates.

When looking at Wil Myers and his pitch results, we recognize a significant outlier against breaking and offspeed pitches. In 2020, Myers crushed breaking pitches and offspeed pitches relative to 2018 and 2019, where he struggled. Although the whiff rates against those pitches rose in 2020, Myers finished with a higher batting average, slugging percentage, and wOBA. Overall, these improved results against breaking and offspeed pitches probably contributed to the improved slash line in 2020. Again, these 2020 numbers against non-fastballs appear like the outlier in comparison to previous seasons. Thus, we take the 2020 pitch results data with a grain of salt and expect it to hover closer to his career numbers.

So what do we make of Wil Myers, and what’s his 2021 outlook? From a fantasy baseball perspective, let’s capture where he ranked on Fantrax scoring and the Razzball Player Rater. According to Fantrax, Wil Myers finished as the 22nd hitter in 2020, sandwiched in between Xander Bogaerts and Adalberto Mondesi. On the Razzball Player Rater, Myers ranked as the 23rd player overall in 15-team rotisserie leagues. Unsurprisingly, Wil Myers ranked as one of the best fantasy baseball players, given that he smashed during the 2020 season.

Wil Myers is known for his power and speed combination, which is valuable in traditional 5×5 rotisserie leagues. He provided the power in 2020 but lacked the steals, even though he racked up the counting stats. Myers paced out for career bests in 2020, but that likely would’ve fallen closer to his career averages. He also reached career bests in terms of percentages and percentile rankings for his Statcast data. Also, give credit to Mike Kurland for noticing Wil Myers and the intriguing swing changes early on in 2020.

On the flip side, reasons for concern include the drop in his average exit velocity on FB/LD when comparing 2017-2019. Also, the maximum exit velocity gradually dipped for Wil Myers, which could indicate potential red flags in terms of raw power. Next, let’s consider the injuries and missed games.

When analyzing how he performed against different pitch types, Myers performed well against breaking and offspeed pitches in 2020. With three seasons and consistent struggles against breaking and offspeed pitches, it begs the question of whether his success against non-fastballs continues. Over a full season, it’s safe to expect those numbers to even out.

In looking at the 2Early Mock Drafts, Wil Myers had a 111.7 ADP sandwiched in between Sandy Alcantara and Jose Altuve. Given that he only holds outfield eligibility on Fantrax, he would’ve ranked as the 24th outfielder drafted between Kyle Lewis and Mike Yastrzemski. Fellow FantraxHQ writer Chris Clegg ranks Wil Myers 68th in his early 2021 hitter rankings.

From 2016-2017, when Wil Myers compiled his best two seasons, he ranked 30th with 58 home runs and 11th with 48 steals. Then from 2018-2020, Myers ranked 96th with 44 home runs and 31st with 31 steals. Overall, Myers provides a power and speed combination that’s enticing at his ADP, assuming he stays healthy. However, monitor whether the drop in steals in 2020 is more of an outlier or a trend moving forward.